The international event returns to Place de la Bourse with a tempting array of works for all tastes. 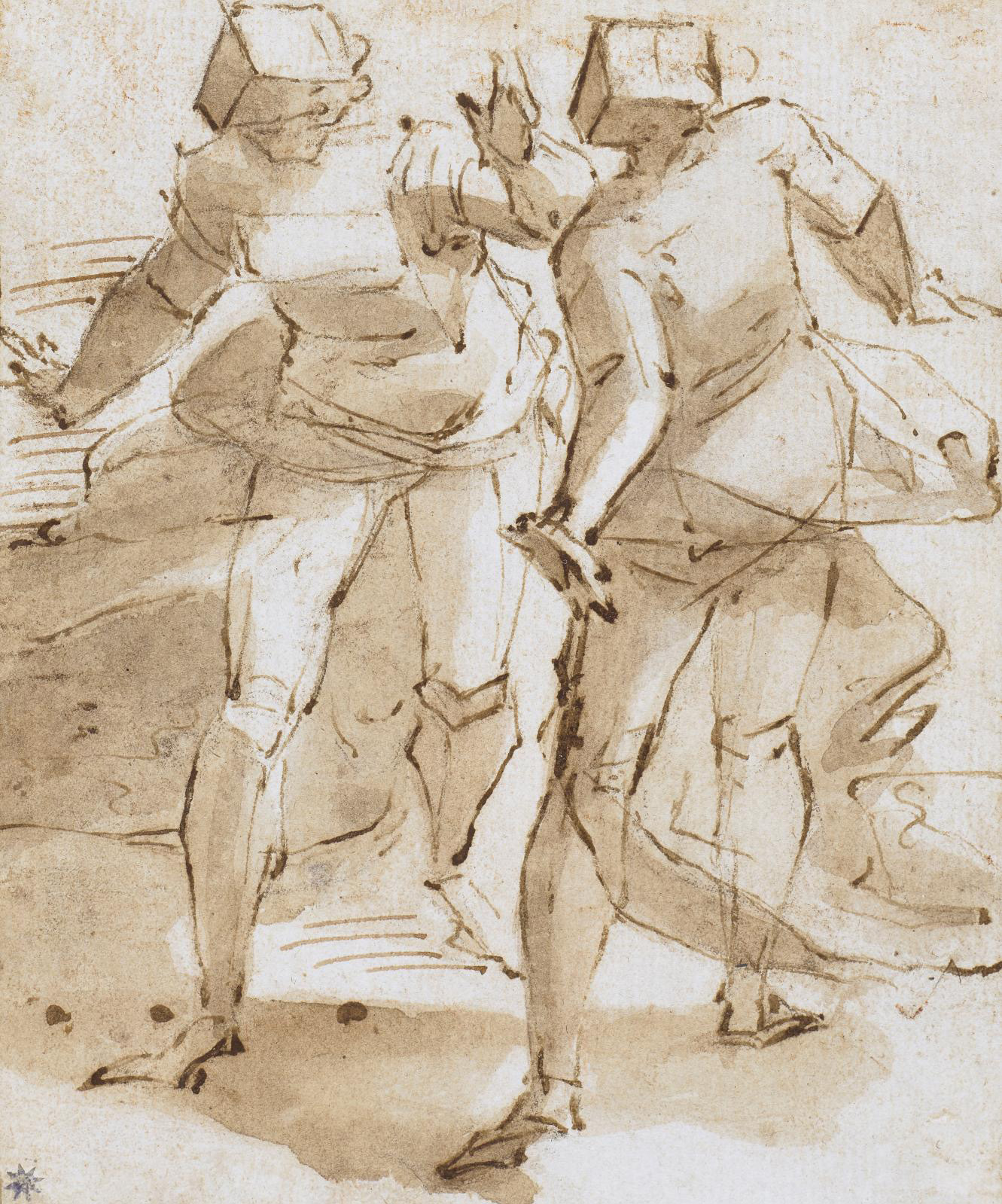 A Minerva owl, a symbol of knowledge and erudition, adorns the catalog and poster of this year's Salon du Dessin, which is making a full comeback at the Palais Brongniart. This work by Nicolas Robert (1614-1685) was a favorite of former Louvre president Pierre Rosenberg, who donated his collection to the future Musée du Grand Siècle de Saint-Cloud, a project supported by Patrick Devedjian, who died prematurely of Covid. The owl was not part of the donation, but the exhibition features a wide array of beautiful known or unknown drawings from the 17th to 20th centuries. Athena’s attribute with its large round eyes could also be Rosenberg’s, an eminent curator and disciple of Poussin. "To collect, you need at least one of three things: money, time and knowledge,” he said. “Few people have all three.” If knowledge, even erudition, characterizes a notable part of the visitors to the Salon du Dessin, curators and specialists in the lead, the event’s variety of periods, subjects and prices attracts a wider public driven by curiosity and taste. For once, it will not be held in March, a few days before TEFAF Maastricht, as collectors and curators often combine the two, but in May, with TEFAF taking place exceptionally at the end of June. "Sixteen dealers are participating in both, but mostly with paintings in Maastricht,” says Salon de Dessin president Louis de Bayser. This year’s exhibitors are eagerly awaiting the return of Americans. “They’re not the largest contingent of visitors, but the most important,” says Mr. de Bayser. “Many museums, notably the Getty in Los Angeles, the Met in New York and the museum in Boston, have announced that they are coming. Some institutions haven’t bought anything for two years!” As a sign of its aura, the fair also hosts the presentation of the prestigious Daniel & Florence Guerlain Foundation for Contemporary Art Drawing Award ceremony, where nominees Olga Chernysheva, Chloe Piene and Gert & Uwe Tobias will be introduced.

An Unmissable Week
Paris plays a key role in attracting foreign curators and collectors. The Salon du Dessin, which is celebrating its 30th year, has become an unmissable event unequaled in the world. It is at the heart of a week that brings together many institutions and auction houses, climaxing with the sale of a Michelangelo drawing at Christie's Paris on May 18. While the number of exhibitors, 39, remains unchanged, this year the show welcomes five new ones, including three Italians. They are the galleries Enrico Frascione, focused on ancient and modern drawings, Romano Fine Arts from Florence, which specializes in the 19th century, and Rome and London-based Apolloni Laocoon, which specializes in neoclassicism. In addition, dealer Ambroise Duchemin, son of Paris gallery owner Hubert Duchemin, will bring a drawing by Spilliaert illustrating a scene from Maurice Maeterlinck’s La Princesse Maleine (Princess Maleine); Kupka’s unexpected Bord de mer à Trégastel (Seaside in Trégastel); and works by Bourdelle and Ingres, while Louis & Sack focuses on post-war Japanese art.

Old Drawings Are Still Going Strong
In recent years, modern and contemporary drawings have gained ground as old ones, many of which have entered collections or museums, become scarcer and their prices rise, but many are still at the fair. “I’d say that a little less than half the works are modern and contemporary,” says Mr. de Bayser. Old drawings have not had the last word. This year’s highlights include a study of a draped young man, a superb Renaissance work by Luca Signorelli, an artist who was supported by the Medici. Presented by Jean-Luc Baroni & Marty de Cambiaire, it comes from the former Vita-Antaldi Collection, which has many drawings by Raphael. The price is around a million euros. In quite another vein, it will take more or less the same amount to buy three pastel studies of heads by Degas at Hélène Bailly, who will also present a selection of 20th-century drawings by Alexander Calder, Bernard Buffet, Max Ernst, Tom Wesselmann and others. Michel Descours is betting on 'Flower Power' with about 15 drawings by Lyon artist Antoine Berjon (1754-1843), a great still life specialist whose works are in the Louvre. Antoine Laurentin immerses us in Sam Szafran's lush philodendrons with a 2005 portrait of his wife Lilette. Stephen Ongpin will exhibit a Cézanne landscape featuring his most famous motif, Mont Sainte-Victoire. One of the most singular old drawings will undoubtedly be Two Animated Figures in Motion by Luca Cambiaso, a master of the 16th-century Genoese School, that the Brady & Co Gallery will bring from New York. Cambiaso tried to capture the movement of two people—perhaps they are dancing—and, curiously, replaced their heads by cubes. Visitors to de Bayser’s stand will find Nicolas Robert’s superb 17th-century watercolor of a red ibis delightful. Talabardon & Gautier, renowned for the ability to unearth highly unusual works, will feature a 1785 scene by Swiss artist Johann Heinrich Lips from Ulysses in the Underworld showing the hero to his best advantage. Of course, exhibitors will present all the works kept secret until the last minute. Lastly, this year’s Salon du Dessin is charting a new course by devoting its meetings on May 18 and 19 to the art of gardens and botany. An exhibition will focus on drawings by Achille Duchêne, a major 20th-century landscape architect inspired by French gardens, with works on loan from the musée des Arts décoratifs (MAD) in Paris. A guided tour of the Bagatelle garden is also planned. As Voltaire said, make your garden grow!

The Salon du dessin will highlight the Pierre Rosenberg collection
In 2020, Pierre Rosenberg, the guest of honor at the Salon du Dessin, donated his colossal collection to the future musée du Grand siècle in the former barracks at Saint-Cloud, of which it will be the centerpiece. The museum will unveil about 40 drawings out of the 3,500 collected by the honorary president-director of the Louvre. Works by his favorite 17th-century painters—Le Brun, Simon Vouet, his pupil Michel Dorigny and Guercino—are alongside forays into the 19th century, especially Ingres, and hints of the next century with Swedish artist Gunnar Hallström, among others. The range speaks volumes about Rosenberg’s insatiable appetite, who can often be seen at Drouot with his eternal red scarf. “There are two breeds of collectors,” he says. “Selective ones, like Louis-Antoine Prat for French drawings, and bulimics like me, who buy too much too fast. I started very early, at a time when the prices of drawings were not as high as they are today, which allowed me to build up a collection. I bought a lot at Drouot and the flea market, where I used to go on Saturday mornings.” The 17th-century part of the collection follows two guidelines: “Finding beautiful drawings by great names, and, with an art historian's eye, looking for unknown artists to reconstitute their graphic work.” For the 19th and 20th centuries, he is "drawn to artists [I] like, with a collector's eye, in search of those who, despite their talent, are little represented in French museums, if at all. They are Germans, Italians and Scandinavians who are now becoming fashionable, such as Johan Tobias Sergel and Fortunato Duranti, and will be in the Musée du Grand Siècle. It’s not too late to start a collection without breaking the bank. There are still overlooked artists, like the minor masters of the interwar period,” concludes Rosenberg, who is passionate about Poussin. He is completing a four-volume catalogue raisonné of his paintings, after that of the drawings.
Salon du Dessin, Palais Brongniart, Paris II.
From May 18 to 23, 2022
www.salondudessin.com