The Cité Internationale Universitaire de Paris, a veritable open-air museum, was founded just after the Great War. Its 40 student residences bear witness to a century of social change. 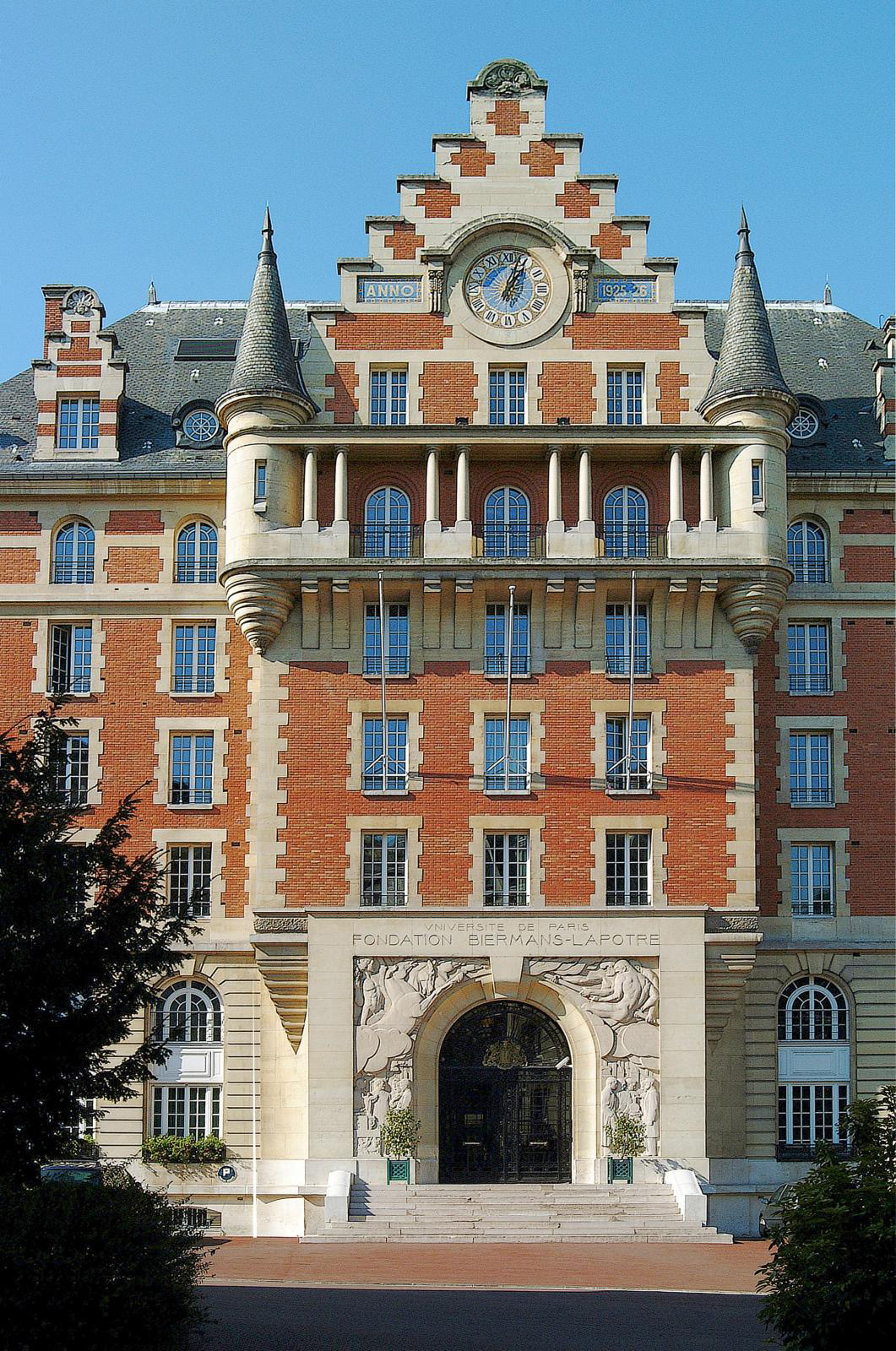 The Cité Internationale Universitaire de Paris is a peaceful, 34-hectare campus in the 14th arrondissement tucked between the Parc Montsouris and the boulevard périphérique, a highway encircling Paris. The grounds are home to an incomparable complex of buildings, including 40 student residences. Three men—representing the State, the City and the University of Paris—officially chartered the Cité on June 7, 1921: André Honnorat, the short-lived Minister of Public Instruction and Fine Arts (1920-1921); Paul Appell, rector of the University of Paris (1920-1925); and Émile Deutsch de La Meurthe, an industrialist and philanthropist who donated 10 million gold francs to launch the project. Their ambitions were proportionate to the crisis brought about by a devastating war that claimed the lives of 1.5 million Frenchmen and created an unprecedented housing shortage. The Cité had three goals: to meet a critical need for student housing in Paris; to help restore the capital’s place as an international intellectual hub and center of learning; and to work for peace. The idea was that if the world’s future élites studied together, they would get to know and understand each other better and choose cooperation over conflict.

In this context, the choice of site was a powerful symbol. The old bastions 81, 82 and 83 of the fortifications of Paris, which modern warfare had rendered obsolete, stood on the original 27 hectares ceded by the Cité. In 1919, the French National Assembly voted to tear them down, freeing up a huge amount of space. But in keeping with the city planning ideas in the air at the time, building over the whole area was out of the question. Low-income housing would spring up where the bastions once stood, while the 250-meter-wide glacis (editor’s note: open land) around them would be set aside for playing fields and verdant grounds.

An Anglo-American Model
Architect Lucien Bechmann took the new ideas into account when in 1921 he began designing the future Cité Universitaire with support from city urban planner and landscape designer Jean Claude Nicolas Forestier. The two men turned to the American campus model, applying concepts they had seen while on an inspection tour of the United States. They spaced the buildings out in a park-like setting, mixing the formal and the informal in their design of the paths and grounds. Another Anglo-American model inspired Bechmann when in 1925 he designed the first group of buildings for the Fondation Émile et Louise Deutsch de La Meurthe based on the quadrangles and architecture of the Universities of Oxford and Cambridge. Critics who preferred strictly French models disparaged the choice, even though French Gothic architecture inspired the English when they built their universities in the 16th and 17th centuries. Despite the dream of international understanding embodied by the founding of the League of Nations in 1920, nationalism lived on. Political trends were reflected in the architecture of the Cité’s early years, when most of the national pavilions, funded by foreign governments, featured characteristics that supposedly represented their countries. For example, the Fondation Héllenique (Nikolaos Zahos, 1932) has a concrete skeleton clad by a skin of stone with ionic porticoes, while the Colegio de España (Modesto López Otero, 1935) is based on the Duke of Alba’s palace in Salamanca, the Collège Franco-britannique (Pierre Martin and Maurice Vieu, 1937) brings Tudor architecture to mind, and the imposing Maison Internationale (Lucien Bechmann and Jean-Frédéric Larson, 1936) is a pastiche of the Palace of Fontainebleau.

Dutch Modernism
Two thoroughly modern buildings were exceptions to the rule. With its clean, refined vertical and horizontal lines, the 1938 Collège Néerlandais designed by Willem Marinus Dudok, the municipal architect of Hilversum, looks like an architectural version of a Mondrian painting. Even more radical, Le Corbusier’s 1933 Fondation Suisse resembles a hygienist machine. Based on Le Corbusier's Five Points of Architecture, it sits like furniture on sturdy concrete piles. The rooms fit into its steel frame like drawers. All of them have a southerly exposure and large windows letting in plenty of healthy sunlight, then considered essential in the fight against tuberculosis.

After the Second World War, the International Style became prevalent. The Maison de la Tunisie (Jean Sebag, 1953) looks fairly humdrum from the outside, but the interior makes up for it with furnishings designed by Charlotte Perriand, Jean Prouvé and Sonia Delaunay. In 1957, Milanese architect Piero Portaluppi went against the modernist grain by mixing different periods. He not only quoted traditional architecture but grafted on period vestiges, including a 15th-century porch and a 17th-century Baroque fireplace from Mantua. Le Corbusier showed his spirit of contradiction by appropriating the 1959 Maison du Brésil project designed by Lúcio Costa, the man who drew up Brasilia’s master plan. Against the Brazilians’ wishes, Le Corbusier turned the project into something closer to the Fondation Suisse, based on the Brutalist architecture he had developed after the war. In the 1960s, Claude Parent and André Bloc employed another form of Brutalism when they created a design for the Maison de l'Iran (today the Fondation Avicenne) that would alleviate the noise from the busy highway. Suspended from an impressive steel exoskeleton, the rooms are windowless on that side of the building, where a monumental emergency staircase embodies the confidence and audacity of the 'Trente Glorieuses,' the 30-year postwar boom.

Arab Calligraphy
A far-reaching renovation and construction program has been underway since 2013, with 10 new buildings planned by 2025. Some have already been completed. The Bruther Agency’s Résidence Julie-Victoire Daubié (2019) features more glass surface than the Fondation Suisse yet it is more energy efficient. Like the neighboring Fondation Avicenne, the building is blind on the highway side and features an emergency spiral staircase wedged in a gap. At the Pavillon Habib Bourguiba, an extension of the Maison de la Tunisie that opened in late 2020, Explorations Architecture and Lamine Ben Hibet brought back, to a certain degree, the tradition of cultural expression from the Cité’s early days. When they asked Tunisian artist Shoof to design the sunshades that veil the building’s exterior, he turned Arab calligraphy into abstract forms. Among the pavilions to come, those of China and Egypt, largely absent until now, attest to the diplomatic issues that have characterized the Cité Universitaire from the outset. A century later, we need understanding and cooperation among nations more than ever to cool an overheated planet.