The Master of the Aeneid: The Glory of the Enamels of Limoges

This polychrome painted enamel plaque from the Porgès collection (passed down through the family) is part of a huge museum-worthy group produced during the Renaissance in the Limoges workshops. 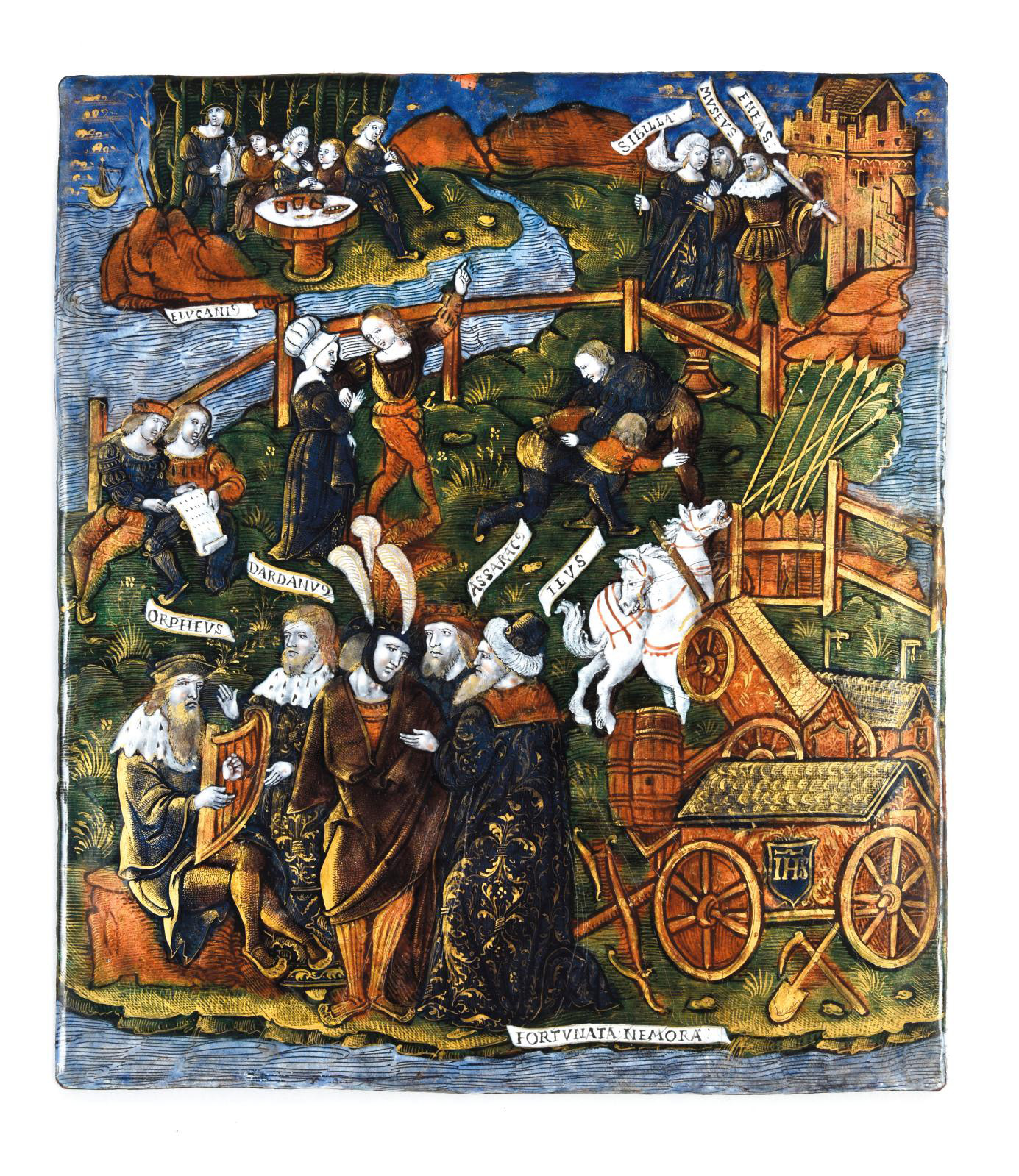 Not seen at auction for 129 years, this enamel plaque has now re-emerged from a distant past, after a long saga marked by unveiled intrigues and mysteries still to be elucidated. Here we see an intriguing and fascinating object from the repertory of the goldsmith-enamelers of the Limoges workshops. Though other enamels from the opus lemovicense (Limoges work) were inspired by Virgil's Aeneid, the scale of this body of work is unparalleled in Limoges enameling, at a time when enamelers had achieved a rare level of excellence in the technique of enamel painting on copper. Their skill attracted the favor of monarchs and wealthy men: François I King of France and Henri de Montmorency-Bouteville were both keen admirers of these paintings born of fire, and helped make them famous.

But the artists were mostly anonymous, and the creator of this plaque is only known as the Master of the Aeneid. Who was he? Attempts to attribute this group to a known enameler are still much debated, and his true identity remains a mystery. Who commissioned the enamels? This too remains a secret. It is conceivable that a series of this kind was intended for a studiolo: small rooms that incorporated all manner of curiosities into their wood paneling during the reign of François I.

A Remarkable Reappearance
Enameling on copper made the fortune for Limoges during the Renaissance, as did the famous champlevé enamels, whose glory was interrupted by the Hundred Years War. The Limoges workshops had a monopoly on painted enamels. While the Italians painted on silver, especially in Murano, the Limousin craftsmen preferred copper: a cheaper material that undoubtedly played a part in their commercial success. From 1515-1520, they began copying prints in small series, but the enameler here did not balk at reproducing an entire book, identified by Jean-Joseph Marquet de Vasselot as Virgile (1502), the work of the Strasbourg printer Johann Grüninger.

To date, the Master of the Aeneid's corpus is limited to this series, which is probably unfinished since the enameler stopped at Book IX, when the work consists of twelve books and 143 illustrations. Eighty-two plaques from a single workshop by a single hand, all based on the same model, make for a truly exceptional set. They are all identified. Eleven are in the Louvre, fifteen in the Metropolitan Museum, seven in the Walters Art Gallery in Baltimore, two in the Victoria & Albert Museum, one in the Musée National de la Renaissance d'Écouen, two in the Los Angeles County Museum of Art and one in the Rijksmuseum in Amsterdam, among others. Thirty-six remain in private collections, including the Rothschilds' and the Duke of Northumberland's.

The reappearance of this one in the market is all the more unexpected as the wife of diamond dealer and collector Jules Porgès had jealously preserved it after her husband's death. Porgès himself bought it from a German collector, who had spotted several in July 1892 in London at the sale of the collection of Hollingworth Magniac, an eminent medieval art specialist. These twenty plates—the largest group by the Master of the Aeneid ever assembled—were then exhibited in the picture gallery of the Hôtel Porgès at 18 Avenue de Montaigne in Paris. After his death in 1921, nineteen plates were sold, forming almost the entire collection of the Metropolitan Museum. But the one here has remained in the collector's family until now. It was probably particularly precious to him, as he gave it a frame with a crimson velvet interior: French work from the late 16th century.

The Limoges Trademark
There is no doubt that the plaque— like the others, with no date or signature—embodies all the qualities of the Master of the Aeneid: those of a Limousin workshop at the time of François I. Here, the characters of Grüninger's woodcuts are more idealized to reflect Renaissance canons. The composition, though dense, is clearer and less crowded than the Gothic original. The chromatic effects of the piece no doubt contribute to its appeal for collectors. The layers of enamel colored with metal oxides were affixed on those of the copper before firing: a Herculean task! From a technical point of view, the Master of the Aeneid used a flux revealing the color of the copper, in the style of his contemporary Léonard Limosin (c. 1505-1575/1577). The chromatic range is soft, enhanced by lavish gilding. The frequency of slightly washed-out yellow and brown-purple tones, the pinkish-white complexions, the stylized water depicted in parallel black lines on blue-gray enamel are common characteristics confirming that all the plaques were made by the same hand. The same is true for their secondary fluxes: the technique had not yet become widespread in the Limousin workshops, as a thick secondary flux was still needed to prevent the plaque from being deformed during firing. The Master of the Aeneid systematizes this use in the entire series, like a trademark. But his work still conceals many secrets. An archive document or another series by the same craftsman could one day reveal the enameler's identity, and open up further prospects for interpretation and discovery.

The Master of the Aeneid
in Five Famous Collections

A Million-Plus Bid for a Limoges Enamel Plaque