The Lacquered Felines of Jean Dunand, Master of Art Deco

Making their debut on the market, these three big cats date from a turning point in the artist's career and boast a rare combination of two lacquer techniques. 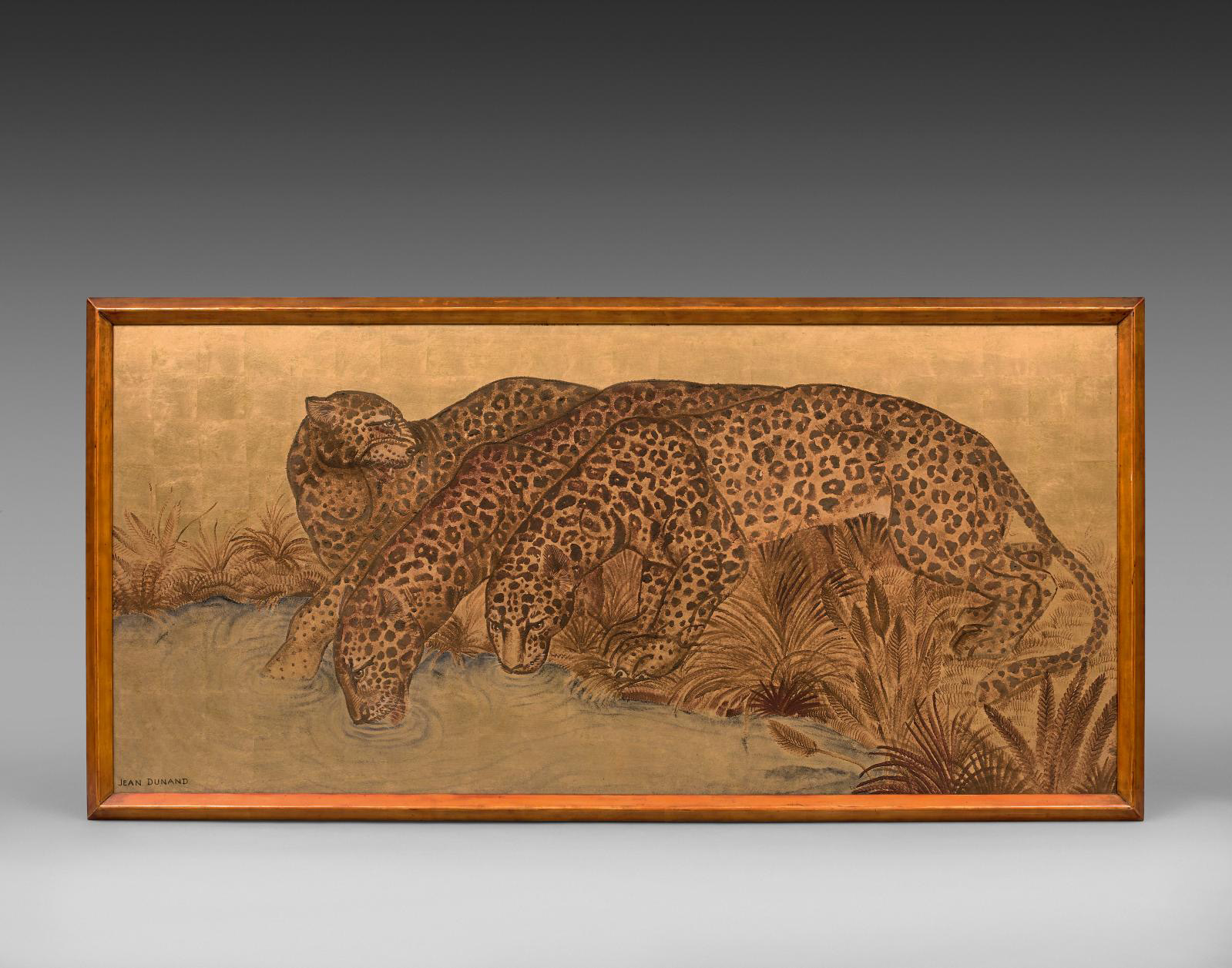 Three leopards are drinking from a stream. The one on the left seems concerned with something happening beyond the scene. Perhaps it has spotted a likely prey or is thinking about the quiet moment ahead of it. Specially created by Jean Dunand for a family who has jealously kept it ever since, displayed next to works by Paul Jouve and other animal painters, this lacquer panel is now facing the auction room for the first time. In this piece, probably dating from c. 1930, the designer yet again illustrates the full extent of his technical mastery and storytelling talents. After meeting Japanese master lacquerer Seizo Sugawara in 1912, Dunand patiently and meticulously developed his expertise. The bodies of the big cats, which glow against a plain gold leaf background, are treated in brown and blue lacquers. Two techniques are used here: laque arrachée and smooth lacquer—a combination rarely found in his work. Used to create relief and introduce play of textures, the former involves lifting the still fresh material with a wooden spatula, which is then withdrawn abruptly. The granulated surface produced by this movement is then sanded smooth. Dunand found the method effective for representing leopards' spots, for example. He also designed the fawn and gold lacquer frame for the composition.

The Animal Kingdom
This work belongs to a golden period in Dunand's career. At the beginning of the 1930s, the artist, then in his fifties, received several important public commissions. In 1929, he began working almost full-time on two large-scale projects: the interior design for the vestibule of the Musée Permanent des Colonies (the main building of the Colonial Exhibition held two years later in the Bois de Vincennes), and part of the decoration for L'Atlantique, the future new flagship of the Compagnie de Navigation Sud-Atlantique. The ocean liner was destroyed in a fire on January 5, 1933: a bitter lesson that led to the use of non-combustible materials for the decor of another ocean liner, Le Normandie in 1934. This floating temple of Art Deco was Dunand's masterpiece, but it cost him his health.

The panels he created for these large projects featured a significant number of exotic animals. Sometimes they were the main subject, as in a piece designed for the Palais de la Porte Dorée, depicting two African elephants in a savannah landscape (now in the Quai Branly Museum). At the time, tigers, leopards and zebras reigned supreme in decorative works. Zoos became fashionable entertainment venues—the Vincennes menagerie opened in 1934—and an increasingly important role was played by the Société des Artistes Animaliers, to which the Muséum National d’Histoire Naturelle devoted a show the same year. Its members were exhibited, received grants and became extremely popular with the public. Dunand, for his part, began orienting his output towards exotic animals in the mid-1920s, collaborating regularly with animal artist Paul Jouve.

Fashion World
Here, in a stylistic turnaround, he moves away from compositions mingling Persian and Japanese influences and a touch of Cubism to adopt a new graphic direction embodied by simplified volumes and storytelling—as witness the uncluttered line and narrative aspect of this scene with the three leopards. It was a move that won him acclaim. This type of panel, mostly resulting from private commissions, was extremely successful, and demand remained high until his death in 1942. In around 1935, he tried a new approach, abandoning groups to focus on one animal in each scene. While some of the pieces he produced in his studio are similar—there are several variations on the leopard theme—the works are never identical. "The artisanal aspect and their unique character made his works highly sought after by collectors," says sale expert Amélie Marcilhac.

The fashion world loomed large in Dunand's clientele. From the early 1920s onwards, Jean-Philippe Worth, Charlotte Revil and the milliner Madame Agnès called on his services. His friend Jeanne Lanvin asked for his help in furnishing various rooms in her private Paris mansion at 16 Rue Barbet-de-Jouy, as did Madeleine Vionnet for her apartment in the 16th arrondissement in around 1929-1930. She was particularly taken with a cubic games table with four folding armchairs in black lacquered wood. Félix and Amélie Marcilhac list a panel Dunand produced at this time for the great couturier with three big cats drinking, also in lacquer and laque arrachée. As part of the Vionnet-Doucet sale held at Drouot on May 3, 1985, it garnered FF305,000 (€84,000 at today's value).

The designer's signature is found on the bottom left of the scene: the only human element in this animal narrative that so charmed the public in the 1930s. The simple, unadorned signature of an artist who continues to prove the importance of his work in the noble history of the decorative arts.