The Hôtel Drouot Reopens for the Season with the “Oeuvres Choisies”

The opening of the Drouot season is marked by "Oeuvres Choisies", on view from September 21 – 23 in Room 9, a particularly sumptuous selection of aristocratic finery as well as some choice memorabilia from French celebrities past and present. 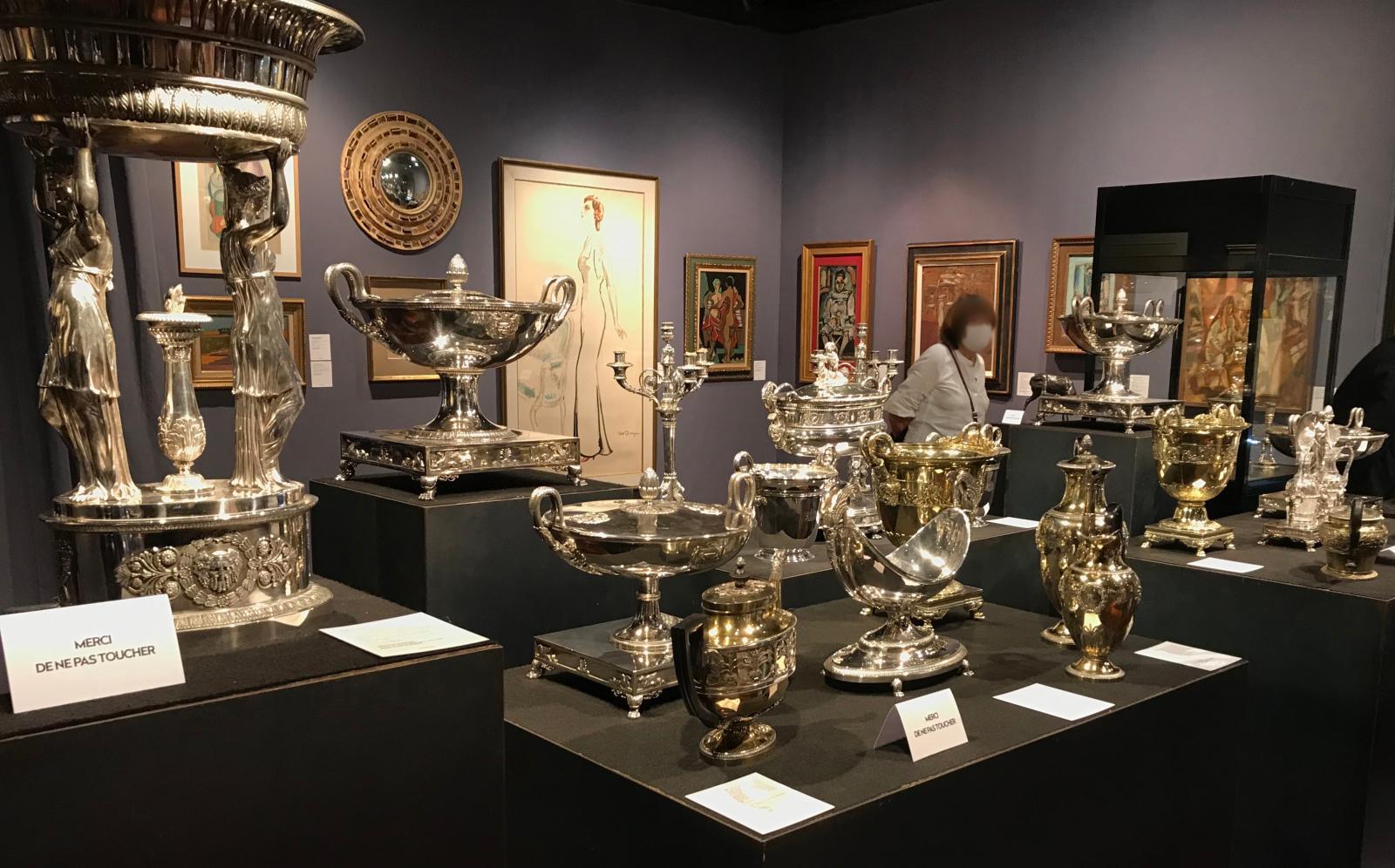 Two great collections of French silver literally shine in the exhibition. Marcel Sztejnberg has spent nearly a lifetime assembling examples of regional French production of the 15th through 18th centuries. The pieces are often of curious form and ornamental treatment, reflecting taste beyond Paris, with most bearing clear hallmarks and crests that document manufacture and ownership. Perhaps the most unusual piece on display—and one of the costliest—is an 18th-century traveler's necessary in gilt silver. Housed in its original silk-lined case, the kit contains a goblet, folding cutlery, condiment receptacles, and a corkscrew fitted with a removable cylindrical nutmeg grate of which the finial unscrews to store the nutmeg itself.

The traditional forms and provincial ornamental motifs of the Sztejnberg collection disappear entirely with the sumptuous table service offered by an anonymous collector. This collection eschews objects of daily use to feature urbane designs intended to impress. Reflecting the taste of the Empire, the forms and ornament are explicitly classical in nature. A pair of soup tureens and dessert cups by Parisian silversmith Jean-Baptiste Claude Odiot—the whole weighing in at 17.5 kilograms—exemplify that purified aesthetic. The smooth surface of the metal is offset by concentrated details such as the griffon feet on which the tureens rests, a frieze of winged sphinxes, and handles modeled as coiled serpents.

The show offers a particularly charming selection of objects associated with one of France’s most venerable families. Two paintings of the Château de la Brosse, razed prior to the Revolution, are accompanied by a bound manuscript of 1780 documenting the famous parties and theatricals organized there by the proprietor Duc Anne Léon II de Montmorency and his wife Charlotte Françoise. A servant’s livery, featuring the colors of the family, is displayed beside the views of the château in which the same multicolored sleeve is recognizable on an attendant maneuvering a boat for the pleasure of those enjoying the park. A papier-mâché model of a “Chinese pavilion” built in the garden of the family’s Paris townhouse reflects the picturesque irregularity and exoticism sought in late eighteenth-century French garden follies. The freely imagined pagoda, surmounted by a fanciful dragon and tower of bells activated by the wind, was designed by Pierre Rousseau (1751-1810), architect of the Hôtel de Salm (today the Legion of Honor), which inspired the architecture of the United States White House.

A collection of refined eighteenth-century clothing is also on view. A remarkable, complete set of child’s court clothing purchased in 1781 at Versailles shimmers with metallic embroidery, gold sequins, and opalescent stones stitched into an almond green silk velour. A dandyish suitcoat of the late eighteenth century features seventeen buttons painted with gallant visual riddles of love and flirtation. Finally, a lady’s dress dated to the 1760s-1770s features what contemporary fashion historians call “Watteau folds,’’ after the figures featured in the artist’s fête galante paintings.

The show includes two particularly rich collections of celebrity memorabilia. The first, focused on Victor Hugo, features three of his small ink drawings. Often built up from random marks and featuring a markedly free exploration of media, Hugo’s drawings have gained interest over the past decades as an artistic practice of equal importance as his written work. On display is the contact imprint of a fern, a practice Hugo deployed to incorporate unusual textures to his visual work. The others depart from a random line to imagine a gargoyle, or from a wash of ink to suggest clouds passing before the sun. The drawings are accompanied by a foolscap scribbled with notes for Les Misérables, with each idea ticked off as it was integrated into the manuscript, as well as a passport of 1871 testifying to the renewed uprooting of his family entourage by political events in France.

Two pieces offered from the collection of Juliette Greco (1927-2020) were particularly intimate gifts given to the late singer. Serge Gainsbourg presented Children At The Square to Greco in 1958. A vestige of his early training as a visual artist and one of only five surviving canvases in circulation, the painting was described by Gainsbourg as a view of his sister and himself playing in a park as children. In turn, La Petite Greco au Chat, an ink drawing of 1953 by Leonard Foujita imagines Greco as a small girl in anachronistic dress cradling a cat on her lap. Although a fantasy, one immediately recognizes the wide eyes of the singer whose career was then in its ascendance.

A large-format 1861 scene of the then Dutch East Indies by Raden Saleh is a particularly rare offering. Born to a wealthy Arab-Javanese family, Saleh was awarded a scholarship to study painting in the Netherlands. Influenced by Dutch and French romanticism, Saleh is considered the first 'modern' painter of Indonesia for his adoption of European techniques. The canvas on offer depicts a bend in a jungle road bathed in a golden light reminiscent of Horace Vernet (1714-1789), who is thought to have been an influence.

As sales resume at Drouot, take this opportunity to preview some of the exciting collections that will appear in the coming months.