The Duchess of Berry, who had a green thumb, enjoyed fruit attractively presented in their foliage nest on plates. Who will be the next to yield to their succulent charms? 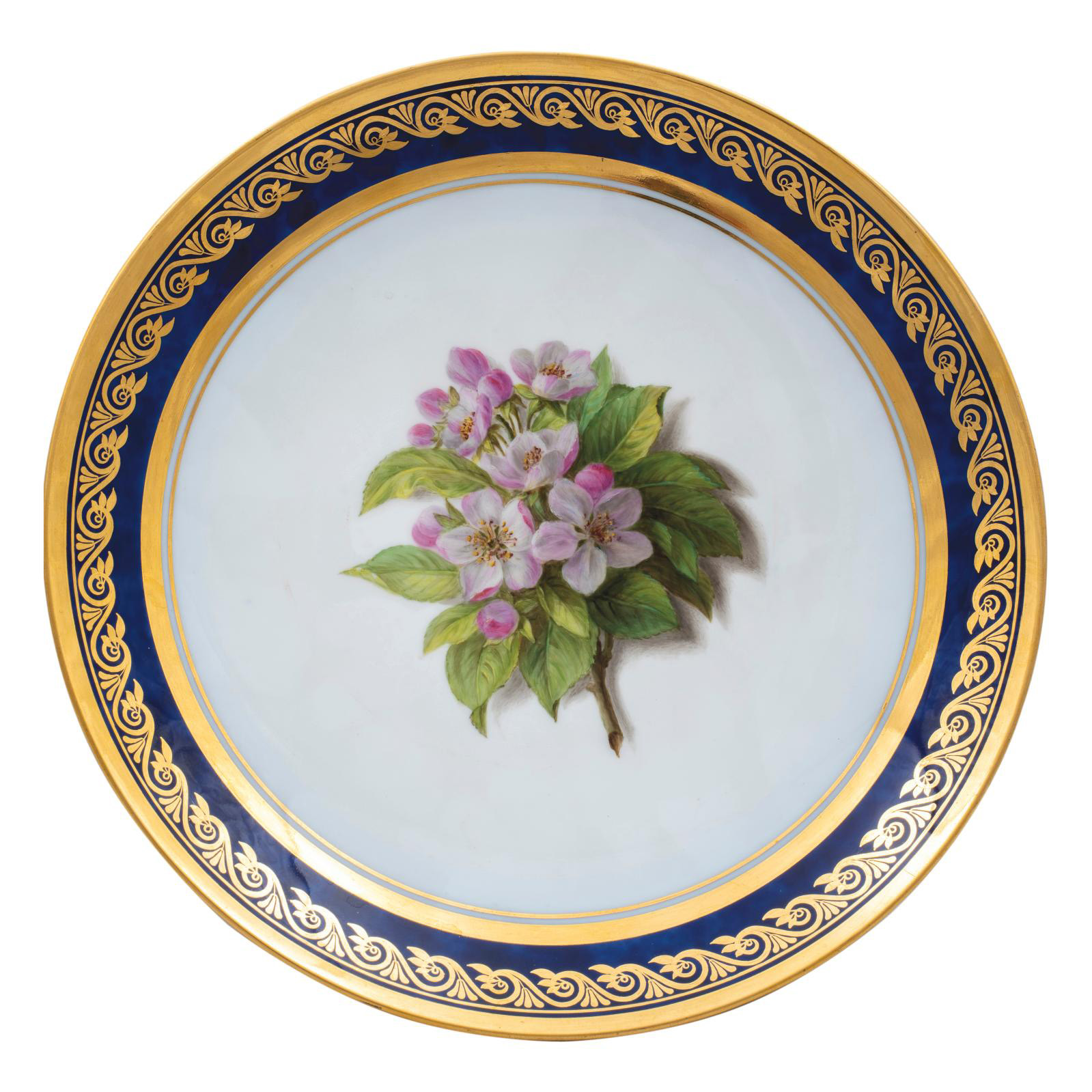 Juicy figs, full-bodied grapes, apples, pears, deep red cherries, flowering strawberries, plump greengage plums, deliciously velvety peaches, split-open pomegranates and many other fruits illustrating the beauty of varieties with nuts, seeds, pits and pips: all these mouth-watering specimens so redolent of summer can be found on the plates of a dessert service with "a lapis blue ground, gold ornamentation and fruits painted on leaves" made by the Sèvres manufactory.

The manufactory’s highly detailed archives tell us that the set was delivered to its shop on December 20, 1825. It included 48 dessert plates, an oval dish, 12 stemmed compotiers, two jasmine baskets, two ice buckets, four fruit bowls and two “mélissin” sugar bowls. Marie-Caroline de Bourbon-Siciles, Duchess of Berry (1798-1870), saw them not in the shop but at the Exhibition of Manufactured Products at the Louvre in January 1826. The young widow immediately purchased the set, continuing to add pieces until 1828, when their number reached 130. The duchess must have been particularly fond of this service because she took it with her when she left France for her home in Venice, the Palazzo Vendramin, and probably would have kept it until her death.

The intrepid heroine and Romantic idol had an eventful life. After unsuccessfully trying to foment an uprising in southern France and the Vendée against Louis-Philippe’s government to give the throne to her son, the "miracle child", Louis XVIII’s great-nephew, she was bankrupt. Heavily indebted to her son, she had to sell the palazzo’s contents at auction. The sale took place at Drouot from May 8 to 13, 1865 under Mr. Pillet’s cautious hammer. The contents were scattered across Europe, with pieces turning up on the art market here and there ever since. This time, a large number is involved, as 46 plates are up for sale in series of six at €15,000/18,000 for each unit and two lots of two (€3,000/4,000 and €5,000/6,000). And these are not forbidden fruit.

Make Your Garden Grow
This sale shows another side of the duchess, who is too often characterized as frivolous. It reveals a young woman with a passion for botany and art who, from 1818 to 1830, transformed the Chateau of Rosny-sur-Seine, acquired by her husband, in keeping with the tastes of the time. She personally chose the thousands of tree species planted there and had a greenhouse built to grow melons, lemons, pineapples and exotic flowers. Her fruit garden boasted 14,000 strawberry plants of eight different species. How could she have resisted one of the most beautiful services produced during the Bourbon Restoration? Each plate is decorated with a different fruit by Moïse Jacobber (1786-1863) and highlighted in gold by François Vaubertrand. The German-born Jacobber was active in Sèvres between 1818 and 1848, specializing in still lifes and fruits. Vaubertrand, active from 1822 to 1848, was deemed among the best gilders in his field.

If the Sèvres manufactory employed talented artists, it was because its director was Alexandre Brongniart (1770-1847) from 1800 to 1847. He breathed essential new life into the manufactory and brought it back to the standard of perfection it had lost during the dark years. Nature, highly fashionable during the Restoration, positively flourished in the Romantic Age. It was a fertile source of inspiration, conducive to quiet contemplation, and appreciated in all its beauty and variety as a refuge from the harshness of life. Furthermore, it was studied and tamed. Brongniart, an eminent naturalist, geologist, mineralogist, paleontologist, zoologist and botanist, fervently embraced nature. He aimed to make Sèvres a conservatory of the arts. He also founded the Musée de la Céramique (1824) and published a masterly book that is still authoritative today, Traité des arts céramiques (Treatise on the Ceramic Arts, Paris, 1844). The rise of Sèvres was extraordinary. Participating in all the major exhibitions of manufactured goods from the first half of the 19th century, it won award after award. What will be the fate of these series of plates? One thing is certain: the greed and envy aroused by the Duchess of Berry’s service are in no way synonymous with sin.