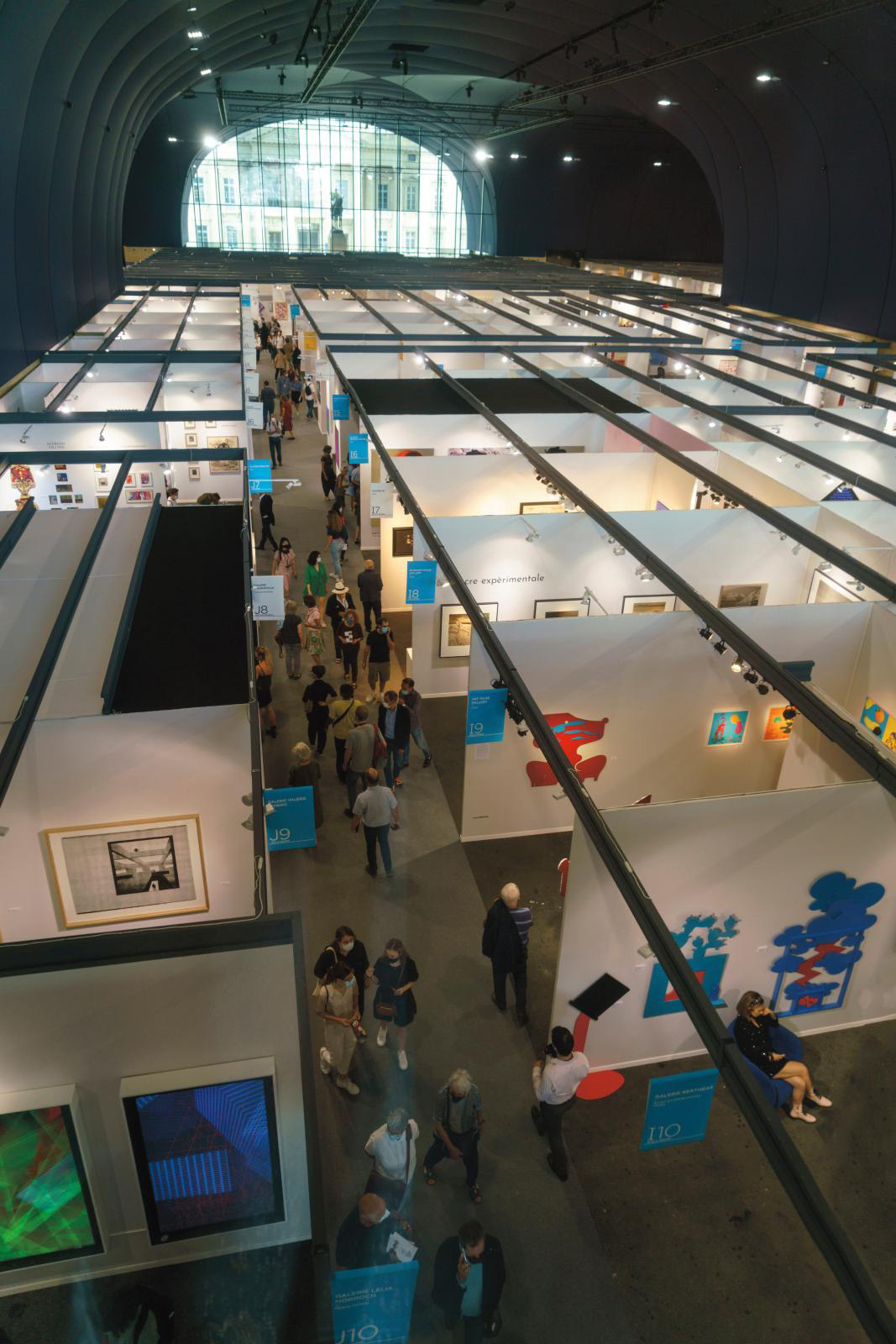 For the second year running, Art Paris launched the art market's fall season in Europe. The first major contemporary art fair in September, with some 140 galleries, it was also the first event of this scope in nearly a year, apart from Arco Madrid, with its highly Spanish and Latinx bent—hence the enthusiasm of visitors and exhibitors alike. The fair posted record attendance, 72,746 entries, topping the figures for 2020 and even 2019. Firstly, this was due to the mandatory health pass, which was reassuring. Secondly, visitors—nearly all French—were happy to visit the Grand Palais Éphémère, a showcase designed by Jean-Michel Wilmotte temporarily positioned on the Champs-de-Mars. While some found it a little dark, with few openings and a limited view of the Eiffel Tower, others, who remember when FIAC was held in a tent or Porte de Versailles, thought it a great success. Last but not least, this year Art Paris welcomed a battalion of high-flying galleries—Perrotin, Kamel Mennour, Continua, Thaddaeus Ropac—which distinctly raised the bar. It didn't matter that some galleries hadn't exactly overdone it with their hangs: their presence was the main thing! However, while the fair gained in quality through these participants, with works on offer over €100,000 at the biggest galleries, the average price remained... an average between €5,000 and €50,000 according to the organizers.

Less Intimidating than FIAC
"It's been a great success," says a Suzanne Tarasieve exhausted by the endless flow of visitors. She sold works by Eva Jospin, Youcef Korichi and Alin Bozbiciu, to a foundation. Almost opposite her, Anne de Villepoix sold nearly all her deceptively acidic paintings by Marcella Barcelo at between €800 and €20,500. The young printmaker Oscar Marsal aroused keen interest at the back of the Bessières Gallery stand, between Dürer and Hubert Robert, with his drawings of the ruins of Nineveh destroyed by Daech. Pauline Pavec sold A Dozen Skies painted by Adam Bogey at €5,000, in the young galleries "Promises" section. For François Dournes, of Lelong & Co (a gallery returning after several years away), "Art Paris attracts many customers who are intimidated by the FIAC, with its image of an expensive fair and international contemporary art. Some of our visitors might be just as wealthy, but not yet used to buying." The gallery sold works by Barthélémy Toguo, Etel Adnan and Marc Desgrandchamp, among others, at between €8,000 and €60,000.

With few installations, photos, abstract or conceptual art, Art Paris is more than ever an uninhibited showcase for painting and representational art—successful in the selection made by curator Hervé Mikaeloff, from Thomas Lévy-Lasne (Filles du Calvaire) to François Malingrëy (Le Feuvre & Roze), though sometimes less of a hit elsewhere. Art Paris has managed to make a go of it in a very congested situation. What will happen in the spring of 2022, when it returns to its usual slot?