With high-perched huts, nests, waves and desolate landscapes, his many-faceted corpus is all part of a single project he has been working on since he started out, of which his studio is also a part. 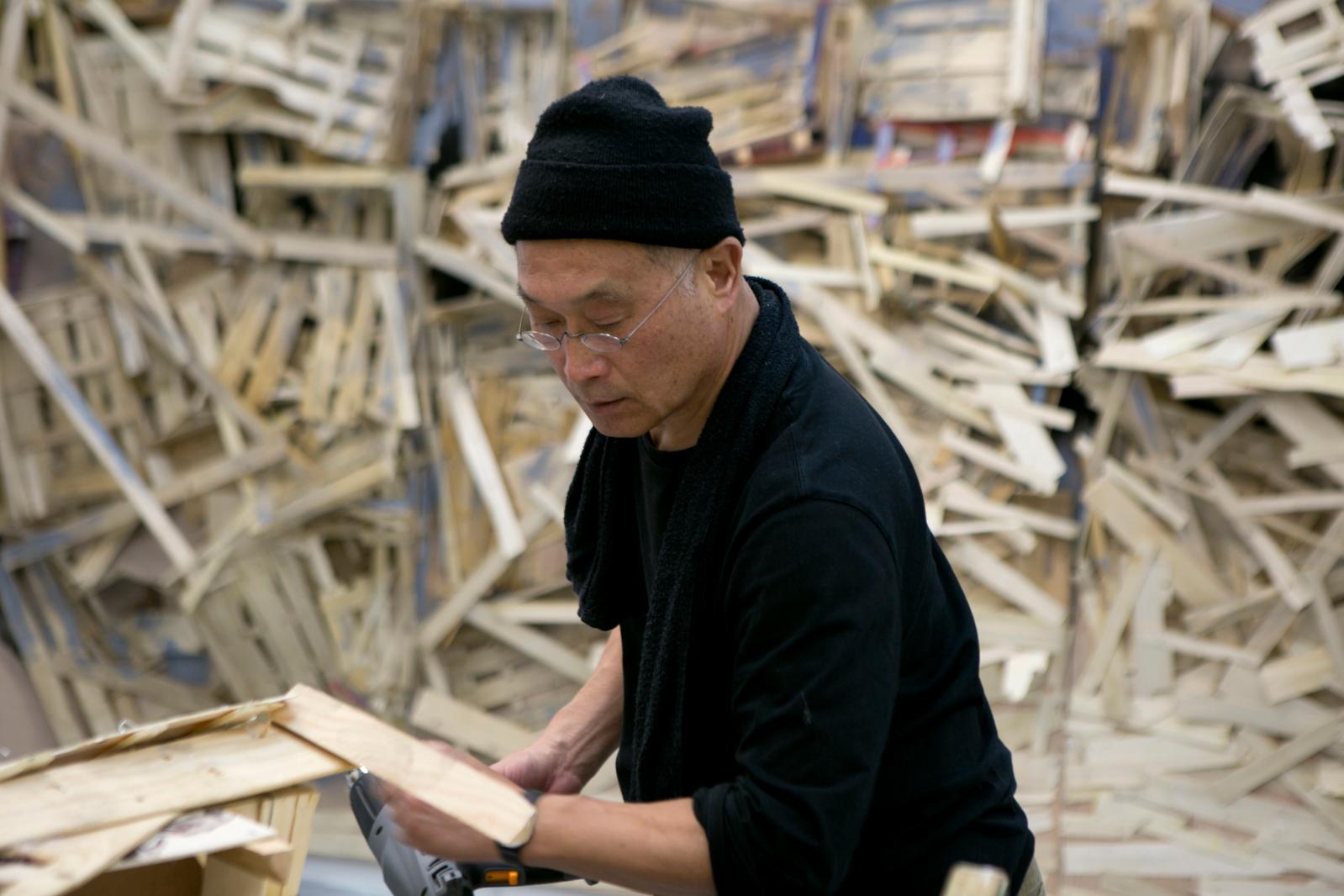 Surely his real studio is those urban, landscaped parks, museums, historical monuments and even the smaller gallery spaces where he usually works? It is tempting to think so since his installations have stood out for over forty years through their construction in situ and adaptation to the surrounding architecture. However, Tadashi Kawamata, born on the Japanese island of Hokkaido in 1953—a teacher, including at the Beaux-Arts de Paris, and a participant in the 1982 Venice Biennale—welcomes us to the Fort de la Briche business park in Saint-Denis, a town on the edge of Paris where, since 2013, he has occupied two 120-m2 or 1291.6 ft2 spaces in large hangars. "One is used for the production of models and the preparation of large works. The other, more recent, functions as a warehouse for pieces about to leave," says his former Beaux-Arts student and permanent assistant, Guillaume Sokoloff, on-site. "Before I moved to Paris in 2006, I didn't have a studio," says the artist. "I traveled a lot, and created my models in my hotel. Since then, I have also set up a small studio in my apartment in the 15th arrondissement."

The Saint-Denis studio is nothing like that of a traditional artist. But he has never been one of those: in 1979, after studying oil painting at the Tokyo University of the Arts, he began using bare stretchers, laying them out in a space to create a labyrinth to walk through. In the center of this high-ceilinged, somewhat cold and empty space, a few brushes and pots of black paint can be seen on the floor, near a sofa and an armchair, and not far from some tool shelves, metal scaffolding and large wooden containers holding some pieces from his "Destructions" series.

Models and Recycled Materials: The Core of His Process
Along the walls, on sheets of plywood, several scale models of huts—hung on painted tree trunks—reproduce those in the urban park of Tremblay-en-France, one of his latest achievements (2019). "My work in situ always involves first constructing models alone, in the studio," he says. "I make three types, in different sizes, using various materials. The first two, linked to the sites, are tools for conceiving and fine-tuning my projects in progress. The third, which is more liberated, abstract and independent from the model, is a pure product of my imagination. The one you see here gives me an overall view of the twenty-one huts in the project and helps me understand their layout within the park." Elsewhere, wooden planks of various sizes and shapes seem to be waiting for something. "These are materials salvaged for a private commission from interior designer Pierre Yovanovitch in Monaco," he says. "I'll use them to create a kind of enveloping cocoon." In a cardboard box is a fragmentary, spidery tangle of small, light-colored wooden sticks glued together, from an earlier installation. Another characteristic of Tadashi Kawamata is the continuous use he makes of poor materials gleaned from the immediate surroundings, like wood, crates, broken or abandoned furniture and plastic waste. "As soon as an installation is finished, I destroy it and reuse it for another project. In fact, I always have the same approach. Though the places I work in are different, and the moments of creation and the people with whom I work on-site are also different, I have always considered my work as one and the same project since I first started out."

Community and Works in Progress
"Creation-destruction-reconstruction" is a way of describing the modus operandi of this pioneering, eco-responsible artist, who sees his work as a living, cyclical process subject to the constant vagaries of change. " I often make very precise models. But the actual nature of the surroundings involves frequent transformation and adaptation, which sometimes leads to clashes with my team." In Saint-Denis, Tadashi Kawamata works with his assistant, but on-site he calls on teams of students, engineers, architects and designers, and also brings in the local population, listening to them attentively and learning a great deal from them. His on-site interventions are also very physical: laying, stacking, fixing and climbing on cranes, like his temporary collaborators. "This is one reason why my installations, which are similar to architecture, are never perfect or finished. I just decide to stop them at a certain point." An approach reflecting the "relational aesthetics" philosophy, as suggested by art critic Annabelle Gugnon? "I've been working this way since the Eighties and Nineties, long before French art historian Nicolas Bourriaud theorized the concept," says the artist with a smile; the "process takes precedence over the result."

Impermanence and Movement
In Tremblay-en-France, his tree huts, inspired by the precarious constructions of the homeless and favelas, are animal refuges that also urge viewers to observe their environment more carefully. The ones that clung like parasitic bodies to the metal structures of the Centre Pompidou in Paris in 2010, the facade of the Strozzi Palace in Florence and the top of the Vendôme column, also in Paris, in 2013, encouraged a sense of lofty heights, among other things. His nests, ephemeral footbridges, observatories, monumental "cathedrals of chairs" and in 2008 the tidal wave of 5,000 vegetable crates bursting from the roof of La Maréchalerie, the contemporary art center in Versailles, and spilling into the courtyard (Gandamaison), are all typologies of installations that express the same idea to varying degrees of dramatic effect: the impermanence of the world and its endless, random process of regeneration. This is also illustrated by his "Destructions": immersive panels similar to the remains of a vanished civilization, exhibited in 2019-2020 at his Paris gallerist Kamel Mennour. A concept he overtly compares with our brief time on Earth. "As human beings, we are confronted with the finite: life has a limit; materials have theirs. In my lexicon, everything is temporary," as he said in the September 2020 issue of 'A'A' magazine, Architecture Today, for which he was the guest editor.

For now, in the studio he considers "a project in itself, a living place of reflection," Tadashi Kawamata is pondering his installation for the first Helsinki Bienniale of Contemporary Art in June. "While visiting Vallisaari Island, deserted by the inhabitants, I found some discarded materials with which I intend to build a kind of tower on site: a lighthouse with a fixed light, visible from afar."

An artist of the indeterminate, whose work lies somewhere between art and architecture, interior and exterior, present, past and future, Tadashi Kawamata never stops thinking about how to perpetuate his project. Without wanting to denounce a state or create propaganda, he pursues his explorations not only in the public space, studying the multiple memories of places, but also in the studio through models and conceptual drawings—his "exercises"—which he exhibits in galleries as well. A true life's work, ever-increasing and infinite.

Tadashi Kawamata will be one of the guest artists in the Festival de l'Histoire de l'Art at the Château de Fontainebleau, on June 4, 5 and 6.
www.festivaldelhistoiredelart.com.

Wang Keping, a founder of the “Stars” group in China, has never enjoyed...