Interior designer Syrie Maugham was wild about patinated mirrors. As one of her looking glass screens makes an appearance in a Parisian gallery, we look back at the story of this quirky Englishwoman who rocked the world of interior design during the interwar period. 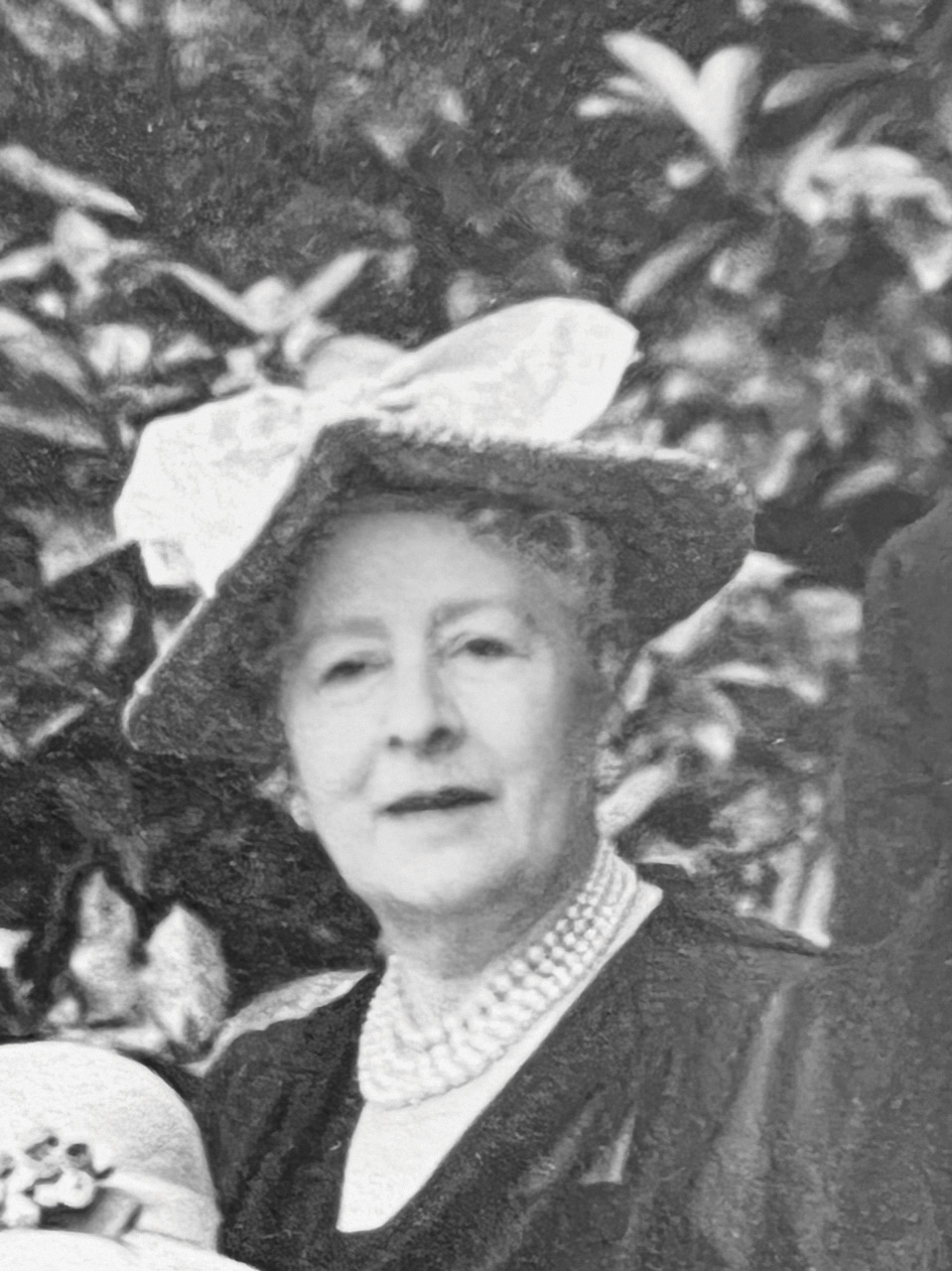 "Féeries!" ("Enchantment!"), the exhibition staged at the Chastel-Maréchal Gallery in Paris, certainly appeals to our fantasies. Among other neo-Baroque creations by Janine Janet, Serge Roche and Line Vautrin, we discover a gem: a screen made of mirrors dreamed up by interior designer Syrie Maugham in the 1920s. Syrie Maugham possessed a strange first name and a famous surname, that of her second husband, the novelist and playwright William Somerset Maugham. She was born Gwendoline Maud Syrie Barnardo. Her father, a Protestant doctor and philanthropist, founded the children's home named after him. The family atmosphere was austere, with compulsory Bible reading every Sunday. To escape all this, Syrie married an American from Wisconsin, Henry Solomon Wellcome, a chemist 26 years her senior who had made a fortune in pharmaceuticals. They soon proved to be incompatible. In her boredom, Syrie diverted herself with another American, Harry Gordon Selfridge, owner of the famous London department store. The Wellcomes parted company. Her husband refused to divorce her, as it was improper, so Syrie was still Mrs. Wellcome when, with Selfridge now off the scene, she met Somerset Maugham. Their affair resulted in a daughter, her beloved Liza. Syrie finally obtained a divorce, and William Somerset Maugham, known as Willie, married her in 1917, although madly in love with Gerald Haxton, a young ambulance driver he had met in Flanders during the First World War. Willie was often absent, either in the US where his plays were being put on, or in some exotic country enjoying the beaches with his lover. The marriage finally broke down, ending in Syrie's second divorce 12 years later.

An Inspired Autodidact
As a Vogue columnist wrote in 1921, "a woman is either happily married, or an interior designer." And indeed, Syrie went into business. This was a great sign of independence at a time when women in high society did not work. She became an apprentice with the interior design firm Thornton-Smith Ltd. Mrs. Maugham had connections. She was a popular hostess well-known for her lively receptions, where her guests were figures from the world of art and literature, including theater designer Oliver Messel, one of her protégés, the rapidly rising photographer Cecil Beaton, the painter Rex Whistler, the writer Beverley Nichols, Noël Coward, author of delightful comedies, and the Sitwells—Edith, a wealthy, eccentric poet and her two brothers. Syrie first used her own home as a showroom. Whenever Willie returned from a trip, he was never sure if he would find his desk, which she might have sold in his absence. In 1922, she was 42 when she opened a small store in Baker Street: Syrie Ltd. Its success led her to move to the upmarket Mayfair district: an ideal location to attract British aristocrats and New World billionaires. She thought big and charged exorbitant prices. The tireless adventurer then crossed the Atlantic to set up shop in Chicago and New York, also renting stores in Palm Beach and Los Angeles.

The White Queen
As an interior designer she supplied Wallis Simpson, later Duchess of Windsor, and the elegant Mona Williams, then on her third husband before becoming Countess Bismarck. According to Pauline C. Metcalf, author of the highly informative monograph Syrie Maugham, she also advised several stars of the screen: Marion Davies, Mary Pickford and Constance Bennett. Her clear, light designs were much acclaimed. Out went the dark, congested interiors of the Victorian era; in came her uncluttered, purified settings. "Eliminate! That's one of the secrets of a stylish interior," she declared. She became known as "the White Queen". The leather-upholstered chairs, sheepskins on the floors, parchment-covered coffee tables, satin curtains and so on were all in immaculate ivory, cream or beige. When she added bouquets of (white) lilacs, she took care to remove the green leaves. Somerset Maugham's wife had a sense of showmanship, and spared no expense. One evening in April 1927, during a party at her home, the hostess revealed a surprise to her guests on the stroke of midnight:  her newly-designed drawing room, all in white! It was dazzling. The legendary room with its screen of vertical mirrored slats inspired Cecil Beaton, who shot several of his portraits there, as he loved the dramatic effect of the looking glasses. Syrie did too, filling entire bathrooms and framing fireplaces with them. Another touch of white enlivened her interiors: the plaster sculptures of Serge Roche, a young talent she launched across the Channel. She had a flair for spotting promising artists: she was one of the first to introduce Jean-Michel Frank's furniture into her designs, and also called on Marion Dorn, a creator of modern carpets where relief weaving formed graphic designs. Mrs. Maugham mingled the old and the contemporary with gay abandon, treating antiques with a certain insouciance. When bargain hunters tracked down pieces for her in Paris flea markets, she had them stripped, patinated, repainted—and copied. In the hands of her craftsmen, carved rococo furniture became ivory and pink or dark green with white or silver, whether contemporary or period. Sometimes they applied an imitation marble patina or a stylish crackled finish. What mattered was not the authenticity of the furniture but the aesthetic effect. But the US Customs were not of the same opinion, since century-old furniture was not subject to the same taxes as recent works. Her tax irregularities forced Syrie to close her stores in the US. The stock—"Beautiful, decorative furnishings in exquisite taste", to quote the advertisement—was sold off at an auction in New York in 1933.

Pompoms and Padding
A new chapter began. White was now passé, as it was too hard to keep clean… Syrie now hoisted her colors, with decided panache. For instance, in the property of Ina (stage name Claire) and William Wallace, in San Francisco, the living room had a red carpet, a table decked in green and blue padded armchairs. Ah, how Syrie loved padding! One amusing detail:  the buttons were not in the same color as the fabric covering the seat. She had her own way of using textiles, trimming her chairs with tassels, fringes and frills. There's nothing like fabric to make an atmosphere cozy! When it came to deploying materials she let rip, especially with Stephen Tennant's home. The extravagant dandy, a close friend of Cecil Beaton and a poet proud to be decadent, commissioned her to design the interior of Wilsford Manor, an Arts and Crafts style house he had inherited. Lying in voluptuous ease, he would instructions from his bed. With opulently draped windows, glossy satin highlighted with black lace, muslin canopies and a bearskin before the fireplace, the setting was worthy of a Hollywood movie. Syrie Maugham certainly left her mark on the history of interior design, inspiring Karl Lagerfeld to pay tribute to her in 2017 when he presented his haute couture collection in the Grand Palais, with models parading in front of Art Deco mirrors. Did this Englishwoman also inspire the famous staircase (classified as a historical monument) paved with mirrors at Chanel in Rue Cambon? Now there's a question.

1901
She marries Henry Salomon Wellcome, a wealthy American from Wisconsin.

1922
She opens her first interior design store in London, which is followed by branches in Chicago and New York.