With the approach of the Second World War, Surrealism moved across borders. In the UK and the US, women artists delved into esotericism, botany, medicine, cinema, naive art—in fact, everything was grist to their mill. 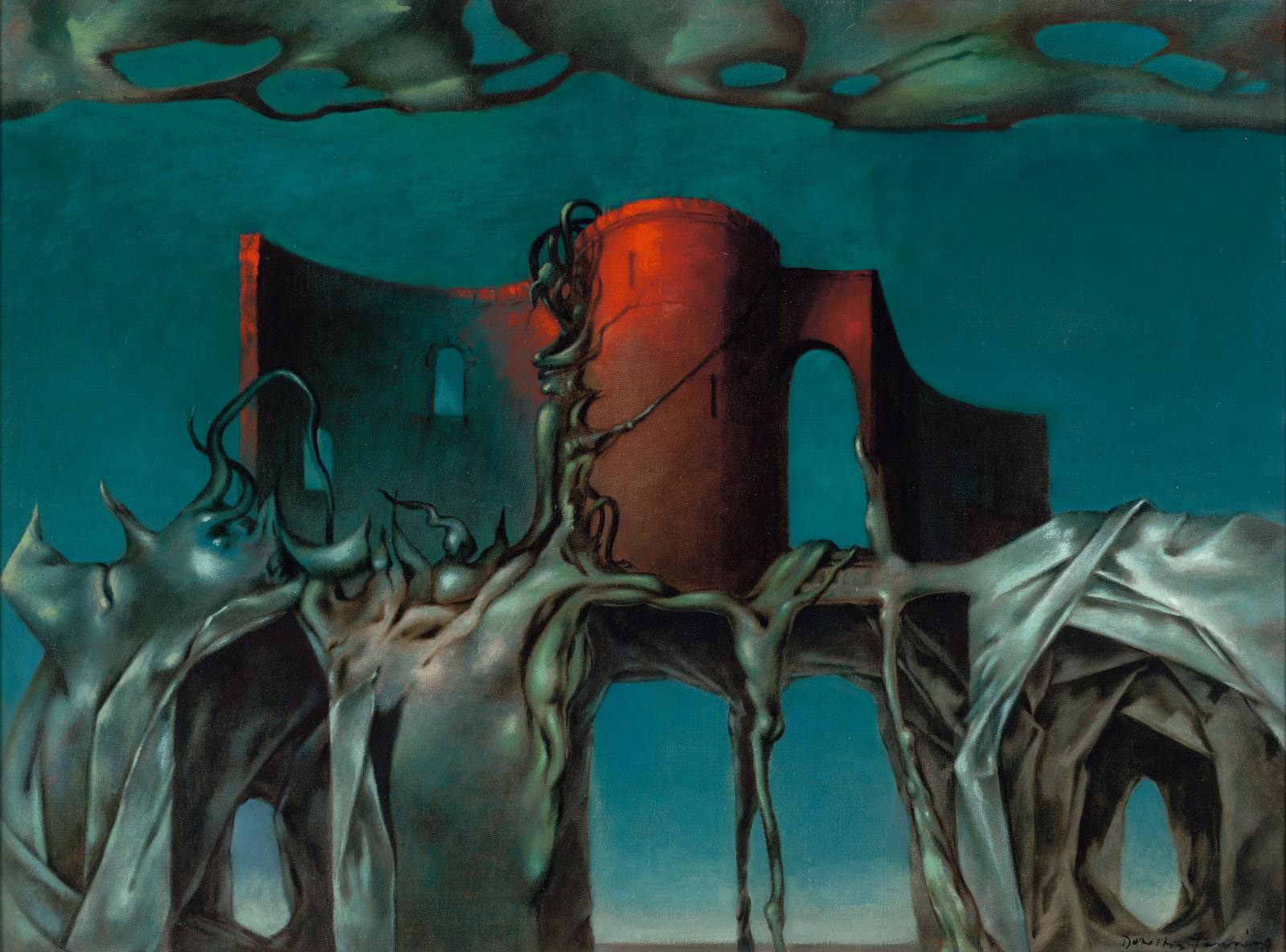 In the 1930s, Surrealism crossed the Channel, winning over writers, critics and artists alike. While a new war seemed increasingly inevitable, more distant journeys tinged with esotericism and oriental philosophies took place. For instance, Valentine Penrose (1898-1978) left England and Europe to live in an ashram in India. Her poems, short stories and collages were then promoted by Paul Éluard, whom she had met in Paris. The British artist Grace Pailthorpe (1883-1971) turned to science in her search for fresh inspiration. Medical imaging and the psychiatric world, already present in Surrealism during the 1920s, played a specific role in her artistic output. After studying music in London, she branched out into medicine and became a surgeon during the Great War. This was followed by a long journey around the world, studies on psychoanalysis and criminal psychology, and finally involvement with British health institutions. Her visual art, which she began alongside her husband, Reuben Mednikoff, was presented in London at the Surrealist exhibition of 1936. Four years later, the couple moved to New York, then to California, and lastly to Vancouver, exhibiting their works and thus spreading the Surrealist word. On their return to England in the late 1940s, they continued to combine clinical practice with artistic creation. Their paintings are full of hybrid animal figures and colored ectoplasms with jovial and comical expressions, but also a nightmarish quality. There was a decided hint of the cartoon and comic strip, and the medical imaging of cellular and tissue forms was a clear influence.

A Hybrid World
In this proto-Pop world on the edge of madness, the adjective "hybrid" was not inappropriate. Affiliated with British Surrealism, Ithell Colquhoun (1906-1988) was attracted by magic and occultism, which led to her being blacklisted by the official movement. Her fascinating works, both figurative and abstract, were combinatory compositions based on astral figures. Her pictorial materials—sometimes thick and viscous, sometimes transparent—also had genital connotations. In a spirit reminiscent of the Renaissance humanists, the British artist Eileen Agar (1899-1991) explored the world of botany in a marvelous way, merging it with small everyday objects as though they were artificial fossils. Her paintings and sculptures combined pebbles, leaves and charms. Through the tiniest details, whether or not organic, she conjured up huge spaces full of fresh innocence in warm, luminous colors. Her works vibrate with a hidden, muted energy, evoking distance and even lostness in space and time: the womb of the earth is somehow close, like the most remote historical periods. After a period in Paris at the end of the 1920s, Agar developed a Surrealist aesthetic, and her participation in the 1936 London exhibition established her name. A cosmopolitan at heart, she mixed with highly exclusive cultural circles, preceded by a singular aura due to her sartorial refinement.

But from 1939 onwards, artists went underground or left France, and Surrealism was banished. Couples broke up, and the British and Americans returned to their countries. The US and Mexico became havens to the movement, and New York and Mexico City its new centers. In the US, Surrealism alarmed the critics but fired the younger generations, and in breaking established traditions it fostered the emergence of post-war pictorial and photographic movements. During and after the world war, Surrealist women were more isolated but also more independent, asserting themselves with aplomb. In 1943, Peggy Guggenheim devoted an initial exhibition to them, with a selection committee chaired by Marcel Duchamp. Despite its dispersal, Surrealism held together.

In America, Kay Sage (1898-1963) made a science fiction-style breakthrough with a somewhat cinematographic world, nurtured by paranoid obsessions, that prefigured the films of David Lynch. She drew on the European tradition from Piranesi to De Chirico, enriching it with a contemporary imagination, and creating sets of fragmented architecture similar to pasteboard Hollywood fiction. These spaces, constructed but opening onto almost abstract vastnesses, were already a foretaste of the all-over style. Sage deployed an elliptical, rebellious art devoid of any human figures or narrative. The ascetic silence of her paintings evoked hallucinations: springboards to other worlds. Her circuitous, stormy adolescent years, youthful loves, marriage to Yves Tanguy and tragic suicide gave rise to all sorts of equally enigmatic stories.

Eros and Melancholia
At the meeting point of Freudian narrative and sexual phantasmagoria, relayed by both Surrealism and America's literature and film, Dorothea Tanning (1910-2012) directly immersed herself in the world of childhood. She injected Surrealism with a new, literal and carnal interpretation of dreams. Her young heroines, prey to all sorts of crazed spasms, were seen in theatrical settings with indistinct walls cutting violently across the canvas. Hypnotized by the Surrealists' arrival in the US in the early 1940s, Tanning became Max Ernst's last wife in a long union of love and artistic exploration. In the mid-1960s, the American artist turned to soft textile sculptures, where fragments of human and animal bodies mated freely in carefree, erotic intimacy.

Still part of American Surrealism, but light-years from any libidinal entanglement, a naïve movement finally emerged with Gertrude Abercrombie (1909-1977), who lived in Chicago, far from the official Surrealist coteries. Nicknamed the "Queen of Bohemia", she was said to divide her time between husbands, cats and gay men friends. As a hippie, she staged jam sessions at her home with Charlie Parker, Sarah Vaughan and Miles Davis. The fragile, irascible artist produced compositions simplified to the extreme. These tender and melancholic pieces are almost caricatural: her female figures, often straight-lined and wearing old-fashioned clothes, have a sleepless but comical feel to them, and are seen in solitary, distant landscapes or interiors.