We visited the Eye of the Collector’s inaugural edition at Two Temple Place in the heart of London (September 8-11). Immersed in 6,000 years of art history in this architectural gem, the promise of the fair did not disappoint. 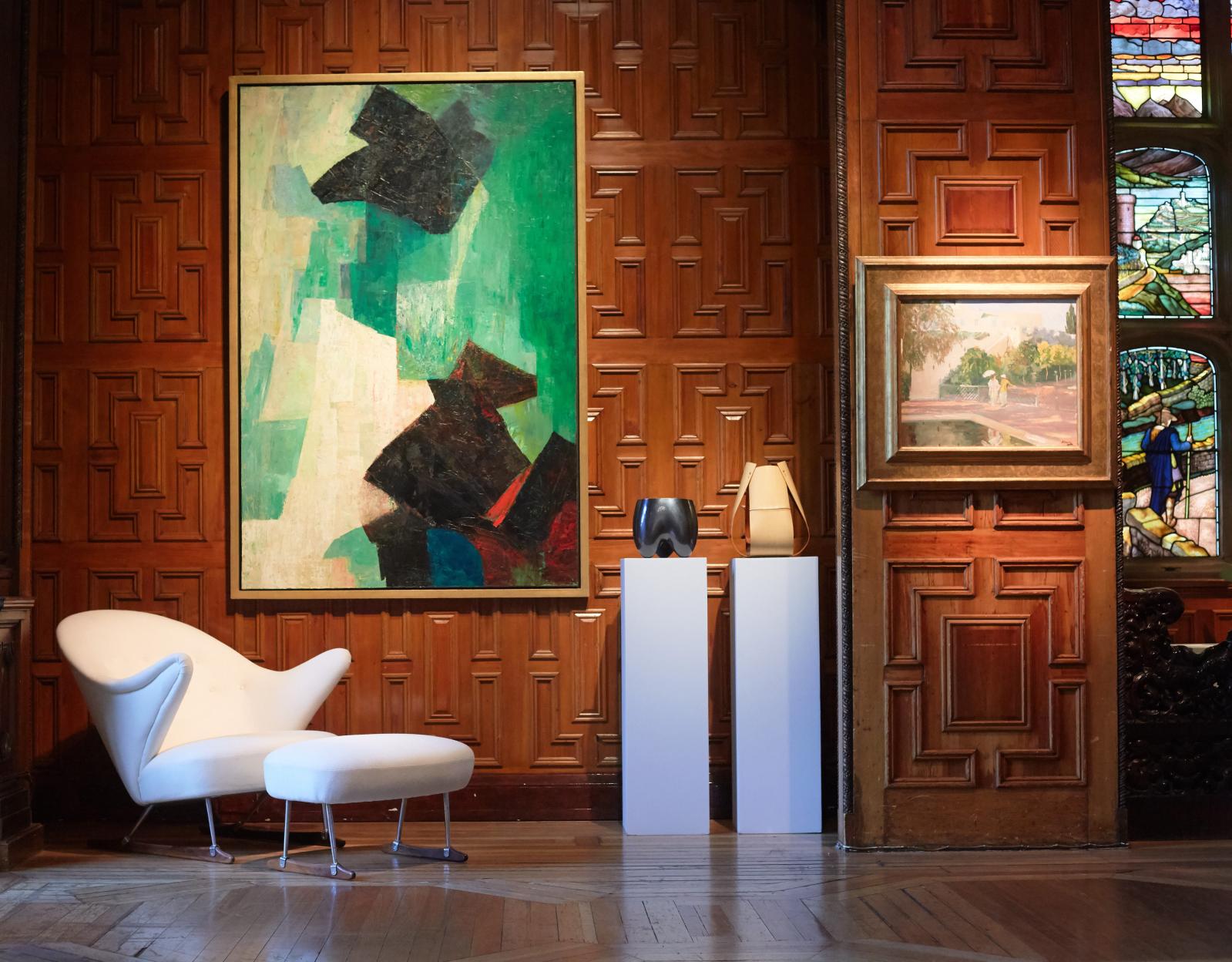 Designed by the renowned Neo-Gothic architect, John Loughborough Pearson (1817-1892), Two Temple Place was built by the American property magnate, William Waldorf Astor (1848-1919), in the 1890s. It is now owned by The Bulldog Trust, which was gifted the property by its founder Richard ‘Tigger’ Hoare (1943-2020). The Eye of the Collector, founded by Nazy Vassegh, took place in these luxurious wood-paneled interiors where visitors were given free rein to embark on an art treasure hunt in almost every room of the house.

Who Was There?
With only thirty participating galleries, it was a small fair with objects ranging from an Illyrian Type Helmet from the 6th-5th century BCE to works by contemporary emerging artists, including the young British sculptor, Rayvenn Shaleigha D’Clark. A wide range of galleries and dealers attended this first edition including Agnews, Gallery 1957, Charles Ede, MTArt Agency, Modernity and Pangolin London. These were mainly all UK-based galleries with the exception of Long-Sharp Gallery from Indianapolis, USA, and Tornabuoni Art, which no longer has a space in London. Therefore, it was a largely local affair.

Doing Away with Booths
What was notable about this fair, in particular, was the lack of booths separating dealers. The galleries submitted all their works to a curatorial advisory board headed by Vassegh and included collectors, curators et al, who decided on the hang and location of the artworks. According to a representative of the fair, once curatorial decisions were established dealers did not make many changes. George Lionel Barker from Gazelli Art House, said “it looked wonderful in the neo-Gothic mansion and was beautifully curated.” The concept of the fair seemed very equalizing with no dealers or artworks prioritized unlike the traditional art fair model, where gallerists fight for their booths to be in prominent positions to attract collectors more easily.

Yet when walking around the fair, it was initially difficult to find information about the works on view without labels or QR codes. However, visitors could return to the objects and read more on the Eye Viewing Room portal and dealers were floating around to answer any questions. This fostered a seamless viewing experience that allowed the works to speak for themselves. The luxurious domestic context of Two Temple Place helped collectors effortlessly imagine the artworks in their homes, without breaking the spell of the reality of a traditional art fair setting.

Artwork Highlights
Highlights from the fair included the Susie MacGarry Stalker, which was made on-site, standing resplendent in the middle of the main stairway complimented by R.B. Kitaj’s painting, Welcome Every Dread Delight (1962), as you walked up the first set of stairs. The most effective displays were upstairs in the Great Hall and the Library. In the Great Hall, ceramic pieces were interspersed on white plinths, three blue and white marbled stands held glass cases of elegant jewelry from Lauren Adriana and Renee So’s Eye Bench I and II (2020), presented by Kate MacGarry, stood in front of the fireplace. The wood-paneled walls were lined with paintings and prints, including Michelangelo Pistoletto Testa con Foulard (1982) presented by Tornabuoni Art and a rich canvas by Perle Fine, Cool Series #18. Deceptive Beat (c. 1961-63) exhibited by Gazelli. In the Library, a beautiful red and black Keith Haring ink drawing (1984) from Long-Sharp Gallery, captured my attention above the fireplace, and two sets of wooden cabinets were tastefully filled with smaller sculptures, ceramics and glassware—combining contemporary sculpture with 450 BCE Greek terracotta vases from Ariadne Galleries.

How Did Sales Go?
Prices allowed for a variety of collecting levels ranging from £1,000 ($1,300+) for studio ceramics to £3M ($4M+) for an intimate portrait by Lucien Freud, A Girl (Pauline Tennant) (1946), presented by Thomas Gibson Fine Art. Marking the opening of the London Autumn Art Market season, Eye of the Collector allowed an art world hungry for art to feast its eyes. Vassegh commented, “We had over 3,000 visitors through the door with a high percentage of collectors amongst them…The quality of visitors was exceptional, they appreciated the curation and scale of the show and enjoyed the exposure to new collecting pathways.” Visitors were invited to further explore the fair through the Eye Viewing Room, where conversations could be continued in the virtual rendering of Two Temple Place. Sales have been successful with “works sold [ranging] between £500 and £75,000”, according to Vassegh. Similarly, George Lionel Barker from Gazelli commented “We sold a few works and met some new clients too, so we are very happy.”

With applications now open for the 2022 edition, it will be interesting to see if there is more international participation in next year’s fair. Vassegh has created a new art fair where the artwork takes center stage and the collector can peacefully browse between rooms uninterrupted. While Felix Art Fair in LA takes the prize over the Atlantic for another unconventional model, with galleries taking over cabana rooms in the Hollywood Roosevelt Hotel, Eye of the Collector presents a uniquely British alternative imbued with charm.