They were everywhere: gardens, menageries and even the private apartments of the kings and princes of France. Two exhibitions show how animals roamed the corridors of power in the 17th and 18th centuries. 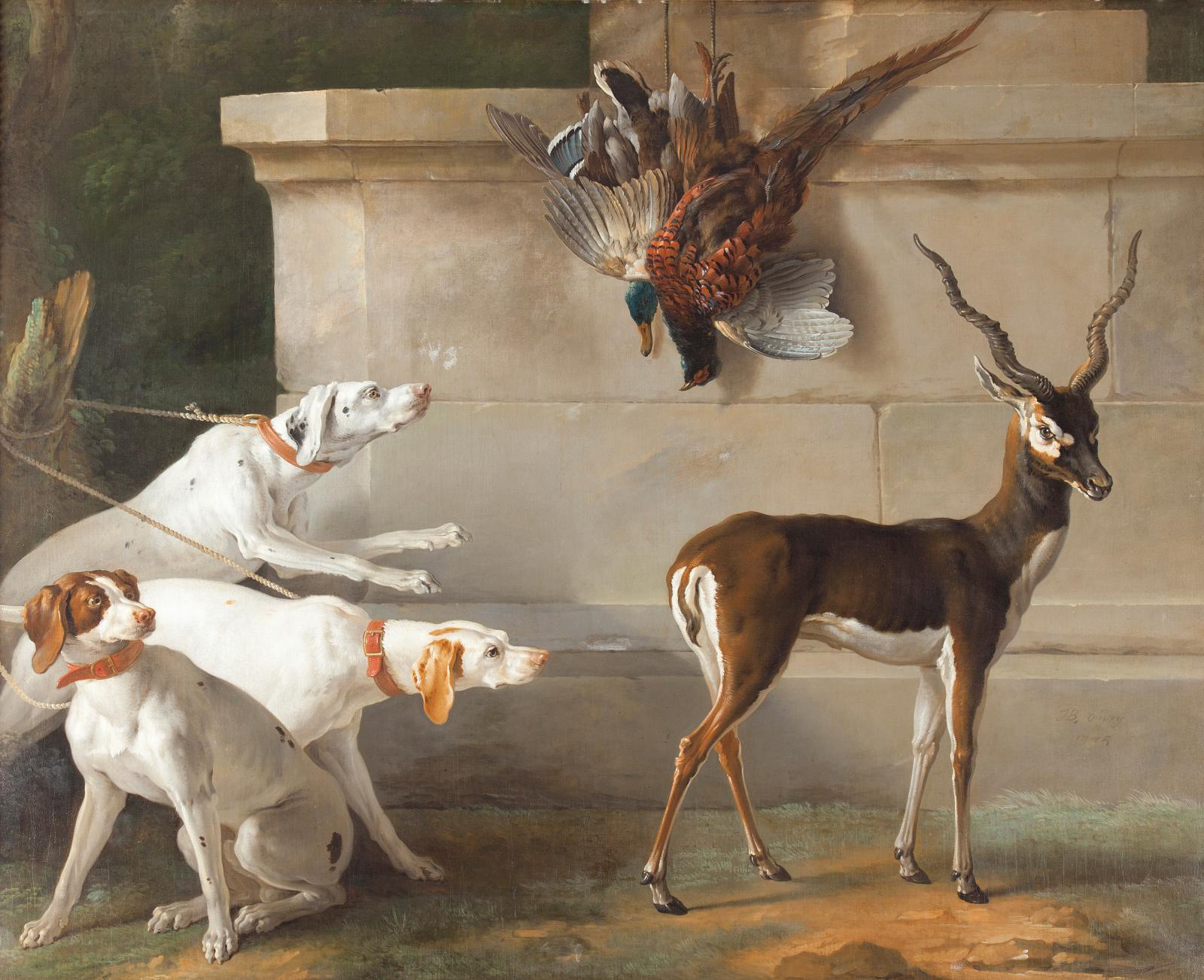 Versailles and, to a lesser extent, Chantilly had thousands of animals and hundreds, even thousands, of species, from cats, dogs and horses to monkeys, deer, reindeer, elephants, coatis, quaggas (now extinct), swans, pheasants and pigeons. They were beasts of burden, food resources, pets or simply ornaments. They contributed to the estates' survival and were spread out between various places of the menagerie and farms: the “ménage de Bucan”, Sylvie's house and the Vineuil farm at Chantilly, Louis XV's new menagerie at Versailles and, later, the queen's hamlet at Trianon in Versailles. Essential for hunting and making war, the noblest of all pursuits, dogs and horses ruled the roost. They were pampered and prominently featured in festivities and official ceremonies. During Louis XIV's reign, the Great and Small Stables at Versailles housed 2,000 horses, and the Great Kennel 300 hunting dogs. Unsurprisingly, some canines lived as near as possible to the royals, who treated them better than they did some courtesans; that must have ruffled some feathers. Louis XIV had the billiard room, the first in his suite of private apartments, transformed to house his favorite dogs. He asked Alexandre-François Desportes to paint his scent hounds. Later, Louis XV asked Jean-Baptiste Oudry to do the same. Their names—Folle, Blonde, Blanche and others—were written in gold. Later, “Louis XV and Marie Leszczynska, both proud cat lovers, lived with them at Versailles,” says Nicolas Milovanovic, head curator of 17th-century French paintings at the Louvre and co-curator of an exhibition at Versailles until February 13. The red velvet square cushion of Brillant, one of the king's angoras, sat on the mantelpiece of the Council Chamber, where ministers debated the nation's policies. Other, more unexpected animals—monkeys, squirrels, civets and parrots—also lived in the royal apartments.

Serving Power
Hundreds of rare, wild and exotic animals served to burnish the kings' image and demonstrate their power. Buffaloes, camels, lynxes, caracals, crocodiles, American black bears, Guinea dear, Campeche peccaries, pelicans, bustards, ostriches and cassowaries overran Chantilly from the 1660s. “These rare animals, which could be found nowhere else,” says Florent Picouleau, head of the musée Condé de Chantilly archives and curator of the exhibition being held there until January 3, “were used to put places and their owners in a favorable light. Kings used animals to boost their image.” Crowned heads and prominent figures visited the menageries at Versailles and Chantilly, capitals of social and festive life at the time. “The royal menagerie mostly had birds and peaceful species,” says Alexandre Maral, head curator of sculpture at the Chateau of Versailles and the exhibition's co-curator. “There were ferocious animals in the royal collections, but they were at Vincennes, where the tradition of fighting continued, without much success. At Versailles, the beauty, peace and harmony of nature were emphasized. The court's elites were also policed through the peaceful spectacle of animals.” Birds accounted for 80 to 90% of the species there and at Chantilly, with a notable preference for aquatic and exotic species, including Barbary ducks, pink flamingos, ostriches, crowned cranes, Chinese pheasants, demoiselle cranes, spoonbills, toucans, pelicans and especially sultana hens. “While Louis XIV liked bright colors, beautiful plumage and the aesthetic aspect,” says Mr. Maral, “Louis XV was more interested in farm animals. This was the start of the physiocrat current, the idea that a kingdom's wealth was based on its agriculture. The focus was the countryside.”

Various buildings and facilities were set up for the use of animals, which had to be comfortable and observable in the best conditions. Courtyards, pens, parks, lodges and shelters were created. Aesthetics mattered. “Real palaces were built for animals at Versailles,” says Mr. Milovanovic. “Some were the most beautiful in the world.” The first example that springs to mind is the royal menagerie's main building, a grand, eight-sided pavilion crowned with a lantern cupola designed by Louis Le Vau and built on the edge of the Grand Canal between 1662 and 1664. Nothing is left, but fortunately, the Louvre curator continues, “some of these places, like the Great Stable, have survived. The palace walls facing the city were built of brick and stone with slate roofs, but architect Hardouin-Mansart chose stone, a much nobler material, for the stables. Louis XIV's ministers lived in brick buildings while his horses lived in stone ones.”

The Birth of Animal Painting
The kingdom's largest two royal menageries boasted a simple, efficient design. At Chantilly, two buildings, the “Apartment of Paintings” and a U-shaped edifice housing the dairy and the Palace of Isis, were erected between 1687 and 1689. The apartment has a series of rooms with animal and landscape paintings whose artists' names are lost to history. Patterned after the Octagon Room at Versailles, it features 61 pictures of animals and barnyards, some painted by Flemish artist Nicasius Bernaerts between 1664 and 1668. He was trained by the father of animal painting, Frans Snyders (1579-1657), in Antwerp, where Pieter Boel (1622-1674) also came from. The animals they painted at Versailles—one to decorate the Octagon Room, the other to provide models for tapestries, decorations and objets d'art—have real historical significance. “The animal paintings at Versailles launched a legacy," says the Louvre curator. “The group must have been enchanting and was then totally new in France. It led to what would later become the French school of animal painting whose starting point was the royal menagerie, with Desportes, who was Bernaerts' pupil, Oudry, Jean-Jacques Bachelier, Jean-Baptiste Huet, etc." The artists highlighted the royals' connections to hunting, engraving their exploits in marble with a highly symbolic value. The tapestry of Louis XV's hunts was woven at the Gobelins between 1736 and 1750 after cartoons by Oudry.

Groups of polychrome lead statues based on Aesop's Fables stood around the fountains in the Labyrinth Grove at Versailles, while others, illustrating those of La Fontaine, were in the courtyards of the menagerie at Chantilly. Moreover, “the decoration at Versailles, starting with the Hall of Mirrors, features many animals,” says Mr. Milovanovic. In the latter half of the 17th century, the prominence of animals in the royals' everyday lives was transposed to decoration and objets d'art, including tabletops inlaid with hard stones during the Sun King's reign after models by Pieter Boel, small soft-paste sculptures from Chantilly collected by the Princes of Condé, zoomorphic lacquers from Japan, Pierre Gouthière's camel andirons (1777) and Pierre-Philippe Thomire's eagle clock (1788) commissioned by Queen Marie-Antoinette.

Diplomatic Gifts
Alive, stuffed, painted or sculpted, royal animals were associated with power. “Since Versailles was the palace of the king of France, the animals depicted there often had a political meaning, starting with the Gallic cock,” says Mr. Milovanovic. “In the Hall of Mirrors and the War Room, the eagle stood for the Holy Roman-Germanic Empire, the lion for Spain and the United Provinces and the peacock for England, which were France's foes at the time.” In the lower part of the precious American Independence candelabra made by Pierre-Philippe Thomire in 1785, three Gallic roosters overhang three chained leopards to evoke the British army's defeat by American and French troops at the Battle of Yorktown in 1781. It was common for royals to give each other remarkable animals: they had been used as diplomatic gifts since the Middle Ages. The King of Portugal gave Louis XIV a Congo elephant in 1668, while Louis XV received one from the governor of Chandernagor in 1772, the same year that Sweden's King Gustav III sent three reindeer to Louis-Joseph de Bourbon, even though his menagerie had none. Some animals embodied rivalries or served to settle political scores. That is how the layout of the menagerie at Chantilly can be interpreted. The Grand Condé designed it as a reference to, as well as to illustrate the difference from, the one at Versailles at the beginning of the Fronde. Didn't Thomas Hobbes write “man is a wolf to man” (Homo homini lupus) a few decades before?