Rediscovery of a Lost Painting by Alexej von Jawlensky, "The Praying Jew"

Alexej von Jawlensky’s search for the ideal face led him to Expressionism; but the Russian artist began his mystical journey with a moving, lost-and-found portrait of a jewish man in prayer. 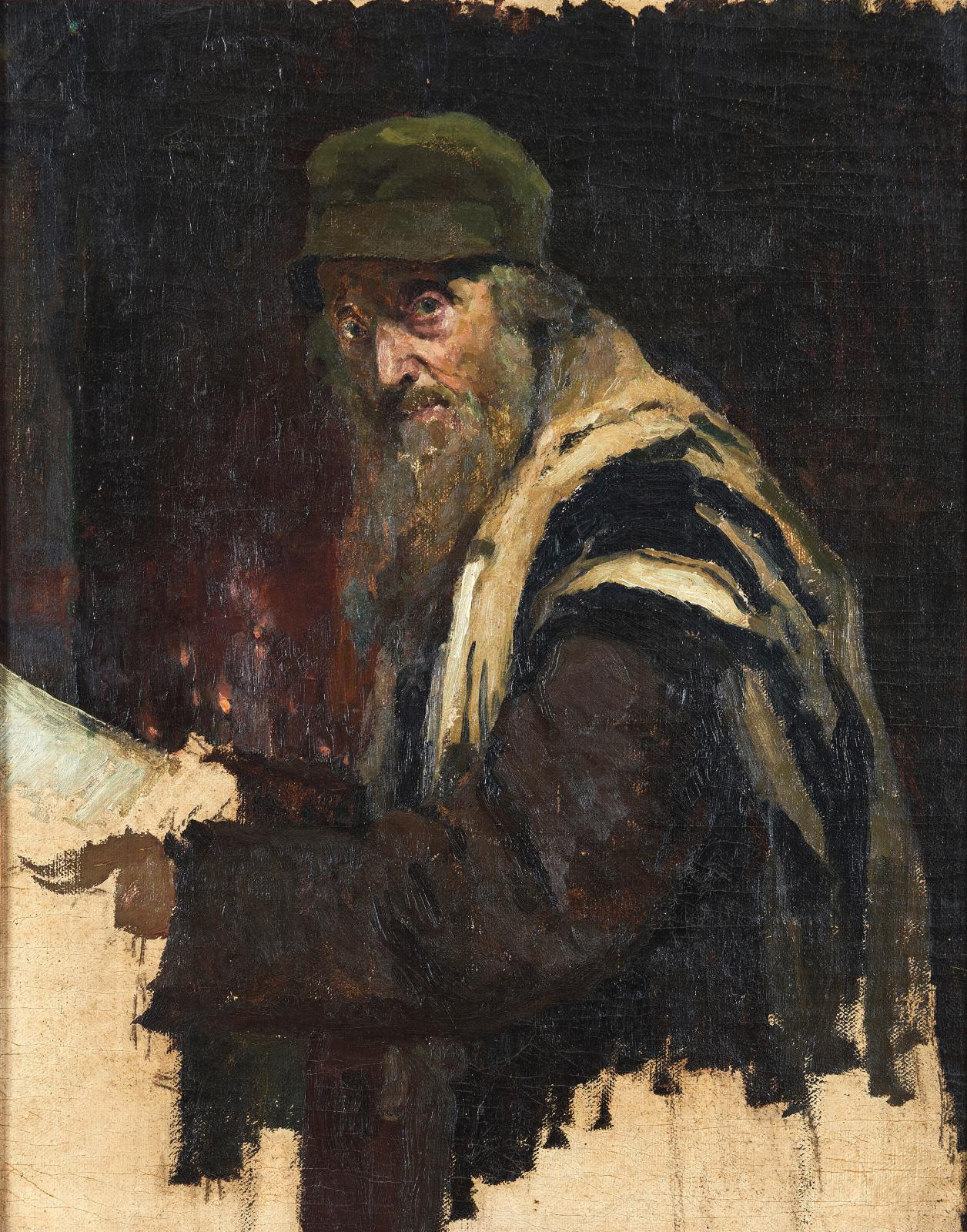 Nothing suggested that Alexej von Jawlensky would become one of the 20th-century’s leading avant-garde artists and a fantastic portraitist of the soul. The son of a Czarist army officer, he was marked out for a military career, graduating from the Cadet School in Moscow with the rank of lieutenant in 1884. In 1896, he left the army with the rank of captain. In the meantime, the aspiring young artist assiduously visited museums and exhibitions and took painting lessons. In 1890, he attended the studio of Ilya Repin (1844–1930), one of Russia’s greatest late-19th-century painters. This played a decisive role. Repin left a lasting influence on Jawlensky, whose early works bear evidence of the great realist master’s painting technique and dark colors. Repin's studio is also where the painter-officer met another student and artist: Marianne von Werefkin (1860–1938).

The Genesis of His First Masterpiece
The strong-willed young woman’s father was also a high-ranking military officer: general commander of the Peter and Paul Fortress in Saint Petersburg. It was love at first sight: Werefkin became Jawlensky’s muse, advisor and companion. Between 1908 and 1914, they participated in the modern art revolution as members of the expressionist group in Munich. Werefkin had introduced the handsome captain to her high-ranking aristocratic family. In 1893, she took him to their manor in Blagodat, near Kovno (today Kaunas), Lithuania, then a province of the Russian Empire. Their stay in the country gave them an opportunity to paint from the motif side-by-side. On a day trip to the surrounding area, Werefkin showed Jawlensky a village populated almost entirely by Jews—one of the nearly countless shtetls that dotted the empire’s western reaches, especially in the "Pale of Settlement" stretching from the Baltic to Ukraine. Jawlensky was fascinated by these people frozen in a parallel and mystical time. He made several portraits of religious old men and bearded rabbis, including The Jew Abraham (private collection), The Jew Yossel (lost during the Second World War) and ours, which resurfaced in Saint-Jean-de-Luz.

Of these three, The Praying Jew is the most complete painting. the sacred texts, the shawl called a talit and the yarmulke confirm that Jawlensky painted the man while praying—perhaps during the sabbath. The candles flickering in the background seem to echo his haunted gaze. The format suggests that Jawlensky was planning to paint a large full-length portrait that he never finished (like many works of the period). The canvas was even trimmed in the lower part of the sketch. Beyond his brilliant rendering of the model’s psychology according to his teacher Repin’s precepts, Jawlensky was an unwitting historian. This questioning face remains a poignant testimony to the Jewish communities that thrived in Lithuania before being completely wiped out by the Nazis and their local collaborators in 1941.

The Unexpected Rediscovery of a Key Work
Jawlensky must have been pleased with this painting since he prominently displayed it on an easel back in his St. Petersburg studio. Two 1893 photographs show high-society guests and officers admiring the portrait with him and Werefkin. However, after a strong, noteworthy start, the inspired work drifted into a shadowy area. Nothing is known of how the painting came to be in France, where a doctor of Polish-Jewish origin who arrived penniless in the 1920s bought it, say his descendants, who are parting with it today. Painter Émile Schuffenecker, incidentally, was one of the doctor’s patients in Paris between the wars. During the Occupation he and his family found refuge in the Agen region and after the Liberation, they settled in Bayonne with his art collection, including The Praying Jew. He does not seem to have known the painter’s identity. The recent pre-sale expertise revealed more. When Cyrillic writing on the back of the canvas was finally deciphered, it revealed that the painting is a "work by a student of Ilya Repin, Jawlensky". Nearly illegible traces of Jawlensky's signature in the middle of the reverse side confirms this. Lastly, after examining the work, the Jawlensky-Archiv S.A. in Muralto, Switzerland, led by Angelica Jawlensky-Bianconi, issued a certificate of authenticity on May 20. thought to be lost, The Praying Jew is now back in its rightful place alongside two similar works, numbered 4 and 5 in the Catalogue raisonné of the Oil Paintings (Sotheby's Publications, 1991).