Pizarro and Incas Emperors United in a Gallery of Portraits

By linking the Inca emperors with Pizarro, these twelve paintings provide rare evidence of historical syncretism shortly before Peru gained its independence. 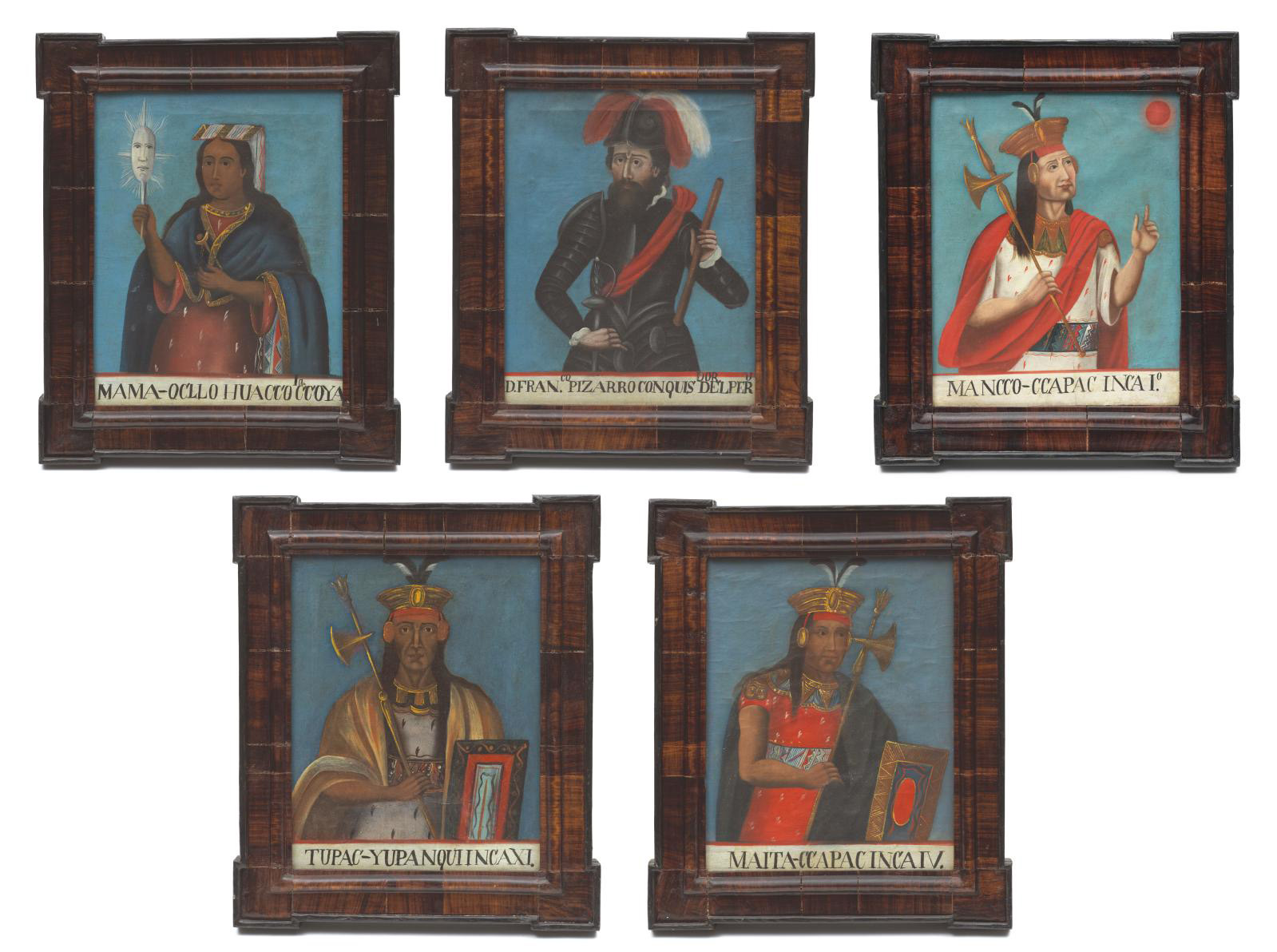 The end of the Inca empire with its population of over eight million, which collapsed in a few months before the onslaught of a small army of barely 200, is a frequently repeated story. The theory that the Incas saw the white men as divine incarnations has often been put forward to explain their lack of resistance—and everyone knows the fate meted out to the last sovereign, Atahualpa, by Francisco Pizarro (c. 1475-1541). But few can cite the names of any other emperors, even though thirteen labored to make this pre-Columbian civilization one of the most fascinating in the known world. The sale of twelve early 19th-century paintings offers an opportunity to look at their careers.

"The Empire of the Four Quarters"
At the time of its apogee in the late 14th century, "the Empire of the Four Quarters" occupied an area of 950,000 sq.km/366,797 sq.m, i.e., the biggest Inca territory ever known. With the Incas, as with other American Indian civilizations, reality is mingled with legend. It all began with the first emperor of Cuzco, Manco Cápac. The Indians believed he was sent to civilize mankind by his father, the Sun god. Did he really exist? Historians differ on this matter, and those who think he did cannot agree on the dates of his reign: 945 to 1006, according to the Spaniard Miguel Cabello de Balboa, author of La Miscelanea Antartica (a chronicle he completed in Lima in 1586); between 1150 and 1178 for others, and between 1226 and 1256 according to the latest theories. Manco Cápac had a sister, who was also his wife, Mama Ocllo—her image is among this group of twelve—and these two were the parents of the second sovereign, Sinchi Roca, also featured here. Fortunately, even if these first traces are lost, those of their successors are shored up by more evidence, especially as they were given faces in various sets of paintings now in international public collections (in Lima, Denver, the Getty Museum in Los Angeles, Berlin and Paris, where the quai Branly has a set of six).

All of them contributed to the mighty Inca civilization, which during the reign of Huayna Capac, the twelfth emperor, achieved an unprecedented expansion, notably due to his marriage with the Queen of Quito. He was the one who built several astronomical observation sites all through the Andes. His death led to a dynastic crisis between two of his sons, Atahualpa and Huascar. Their fratricidal rivalry provoked a civil war, just as Francisco Pizarro and his conquistadors were landing on Peruvian soil. The confrontation of the two radically opposed worlds quickly turned to the Spaniard's advantage, and one of the most brilliant civilizations was finally and ruthlessly wiped out, taking many of its secrets with it.

The Birth of an Art
Painting was not highly developed in the pre-Columbian culture. The Spaniards encouraged its use, seeing it as an effective means of evangelization. As such, auctions regularly feature religious images—Madonnas, angels, saints, etc.—executed by the Cuzco school, founded in the middle of the 16th century under the impetus of the clergy. This art was facilitated by the indigenous peoples' genuine mastery of natural pigments (including the famous orangey-red so popular with Flemish artists) and their skill in natural scenes, expressed with a certain simplicity. Little by little, secular works appeared, mainly portraits of European nobles.

The Peruvians did not appropriate this art immediately and it took an upsurge of nationalistic feeling in the late 17th century for them to make it their own. In Lima, the center of political power, an indigenous elite strove to reconnect with its roots and, in this context, portraits of the Inca emperors took on particular significance. There were numerous rivalries between the dominators and the dominated, so by commissioning pictures of their sovereigns, the latter endeavored to affirm their glorious past. From Manco Capac to Atahualpa, the emperors were depicted full- or half-length, always according to the same canons in a distinctly 'naïve' style. For political purposes, they were accompanied by portraits of the Spanish kings, suggesting that the latter were the successors of the former. Pictorial accuracy was not the point; here it was a question of symbolism. Another type also appeared: a composition regrouping busts of the Incas and of the Spanish sovereigns since Charles V in chronological order on several levels. A Creole clergyman from Lima, Alonso de la Cueva Ponce de León, set the trend for this style when he produced an engraving using this layout between 1725 and 1728. When the colonial regime fell in 1821, painters radically altered their iconographic approach, eliminating the Spanish monarchs and religious symbols.

The particular feature of this set of twelve early 19th-century paintings—which do not include the 7th, 8th and 9th Incas—is the presence of Francisco Pizarro beside the emperors. In September 2020, a series of eleven full-length paintings of the sovereigns (55.1 x 41 cm/21.7 x 16.1 in each) obtained the impressive result of €1,291,500 with the Briscadieu auction house in Bordeaux.

The Lacquered Felines of Jean Dunand, Master of…

Making their debut on the market, these three big cats date from…

An Invitation to the Ball with Magnificent Evening…

A wardrobe in exceptional condition takes us back to the splendors…

First Appearance at Auction of a "Saint Peter"…

A splendid find—a Ribera in fine condition, signed, dated and with…