As both adventurer and gallery owner, Pierre Maurs approached his life and career with the same heartfelt curiosity. The sale of the personal collection of this champion of the painter Othon Friesz (1879-1949) reveals his perspective on an era and an exceptional eye. 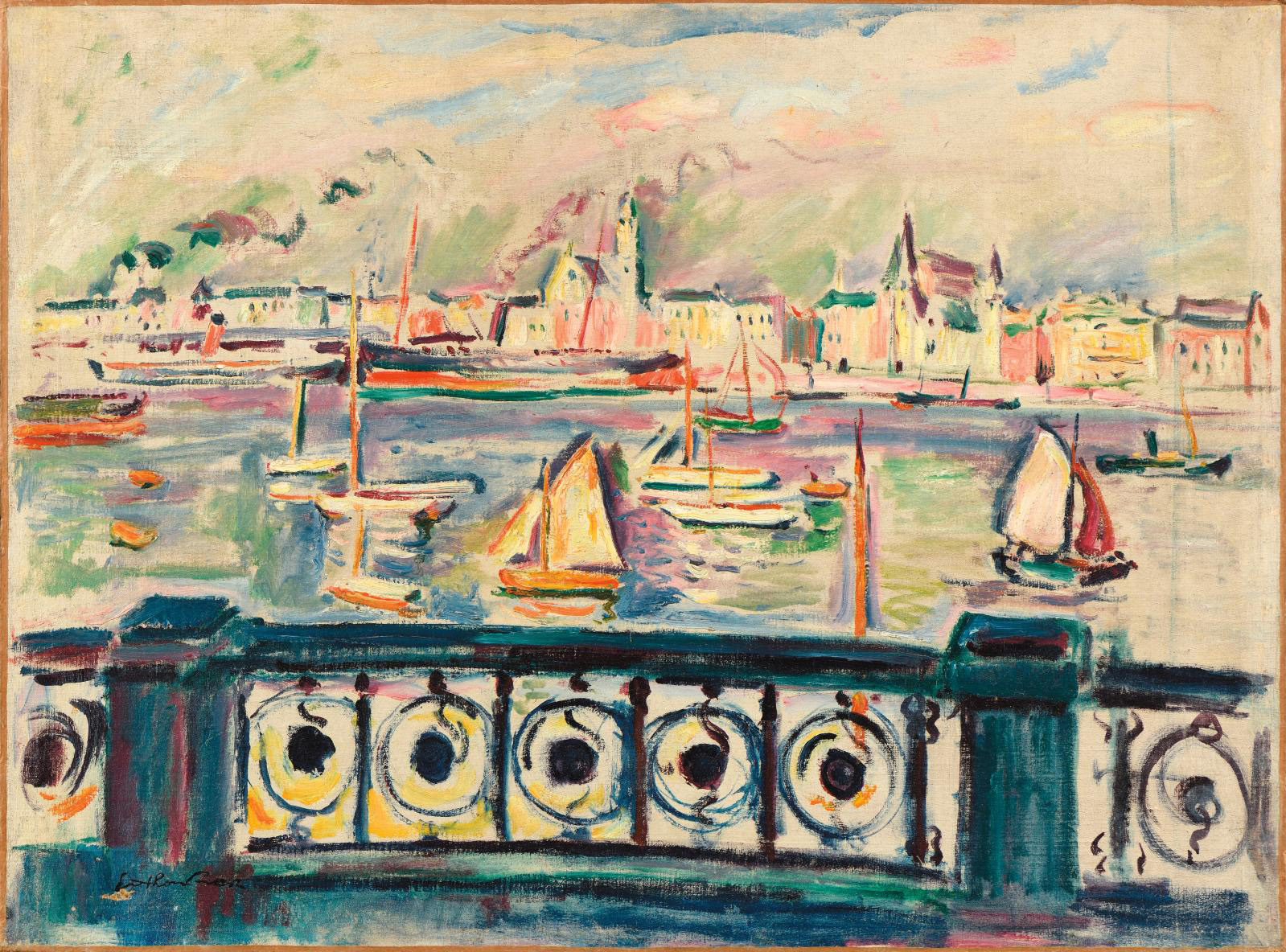 Perhaps Pierre Maurs (1908-2000) is little known in the art world today because of his natural modesty. Yet, this French dealer and collector truly deserves recognition for his keen eye and unique personality as an impassioned and curious man. This will certainly emerge with the sale of the last 135 works from his personal collection. As a child, he was interested in fossils. Auctioneer Rémy Gauthier evokes Maurs' "tireless searches in the geological strata of the Vexin region in France; he unearthed a giant cerithium which went to the Muséum d’Histoire Naturelle in Paris upon his death." But his father, a gunsmith and car dealer, originally intended him for a very different line of work: mechanics.

As soon as he could, he reclaimed his freedom, left Rouen and began a life of adventure that took him first to the École des Beaux-Arts in Paris, then to the depths of the Mediterranean with Commander Cousteau. But he soon headed for the capital and renewed his ties with the artistic world. His sensibilities developed further during his military service in North Africa between 1928 and 1930, alongside the painter Roger Tolmer (1908-1988). The two friends set off in the footsteps of Delacroix. Their discussions gravitated around his approach to Mediterranean light and colors: two fundamental aspects of Maurs' taste, as illustrated by Paul Signac's watercolor Voiliers à Saint-Tropez (Sailing Boats in Saint-Tropez), estimated at €15,000/20,000. These years also deepened his fascination with foreign civilizations. African, Oceanic and Indian art also features in his collection, as witness the 2017 sale of objects from the expedition of La Korrigane. A few items will be presented on June 12, including an album of thirty Mughal-style paintings from the first quarter of the 17th century (€30,000/50,000).

The World of the Art Market
In the 1930s, as an interior decorator for brasseries and art galleries in the 8th arrondissement in Paris, Pierre Maurs met artists like Robert Delaunay, Raoul and Jean Dufy, Albert Gleizes and Jean Metzinger. During the tough period after the 1929 crash, Maurs ran no fewer than seven galleries before buying the one at 3 Avenue Matignon in 1945. Three years later, he became an expert and broker: a new profession that took him all over Europe and to the auction rooms of Drouot, London, Zurich and Geneva. Pierre Maurs was extremely independent, and his tastes were dictated by no one. During his career, he owned several highly sought-after paintings. "The works in this sale represent only a tiny fraction of those once belonging to his collection. During his life as a collector and broker, he bought works by great masters like Renoir, Picasso, Boudin, Chagall, Vlaminck and Friesz," says Rémi Gauthier. In 2011, his Le Clown ou Le Clown Rouge (The Clown or the Red Clown) by Kees Van Dongen sold for over £2 M. As his collection was quietly dispersed over the years, the whole group presented in Tours is particularly significant.

Othon Friesz, Van Dongen, Dufy and others
The Fauves occupy a special place here. They inspired "love at first sight" in Maurs during the 1930s, proclaiming the use of colors driven by emotions he championed. Van Dongen is again present, with the watercolor Scène de rue (Street Scene), estimated at €3,000/5,000, as is Maurice de Vlaminck with a painting from 1908, at the height of his Fauvist period: Péniches sur la Seine (Barges on the Seine) at €80,000/100,000. Maurs also devoted much of his life to promoting the work of Emile Othon Friesz. After the latter's death in 1949, and with his widow's agreement and support, Maurs founded the Othon Friesz Committee and began a long referencing process. He found the Le Havre-born artist appealing for his ability to create a very personal style that constantly developed. After studying with Gustave Moreau, Friesz exhibited in 1905 next to the room featuring the famous Fauves. It was only the following year, during a summer spent with Georges Braque in Antwerp, that he truly adopted their style, as can be seen in the virtuosic Port d’Anvers (Port of Antwerp: €80,000/120,000). This work, similar to the one by Braque now in the National Gallery of Canada in Ottawa, is vibrant with light: an effect achieved by touches of color so lightly applied that the white of the canvas shows through. The paintings from this period in Antwerp are particularly sought after by art lovers—because, after discovering Paul Cézanne's work in 1907, Friesz turned from this style back to more ordered compositions and a restricted palette. This is seen in Le Jardin d’Éden (The Garden of Eden), estimated at €60,000/80,000: a preparatory oil on paper for L’Âge d’or (The Golden Age), now in the Musée d'Art Moderne de la Ville de Paris.

A Liberated View
Pierre Maurs also targeted the Impressionists. Le Pont de Neuilly (The Bridge at Neuilly), a 1905 painting by the 24-year-old Albert Gleizes, is a fine example (€4,000/6,000), while Armand Guillaumin, with Damiette, les gerbes de blé (Damietta: Wheat Sheaves) is a vision full of vibrant colors (€20,000/30,000). Buying a Guillaumin in the 1930s was a gamble, and a journey of discovery. As Maurs said: "Today, no one considers this artist, who is so talented. The whole Impressionist credo is there, but he is overlooked. He will only be recognized when the others are no longer accessible in terms of numbers or price." During the war, he staged a string of exhibitions in his gallery, with Impressionists and Fauves on the upper floor, and, in the basement, contemporary artists seeking to renew the arts and oppose the Nazi dictatorship.

Pierre Maurs took risks and became involved in Parisian cultural life. From May 29 to June 29, 1945, he organized the first Salon de Mai, when the artists exhibited included Manessier, Orazi and Tal-Coat (La Belle Sensuelle (The Sensual Beauty)), a drawing estimated at €100/150). He contributed enormously to thinking on the future of creation, with his own tastes orienting him towards realism. He discovered a Jean Fautrier still figurative but already expressionist through Vase de fleurs à contre-jour (Vase of Fllowers Against the Light), estimated at €30,000/50,000, and a neo-realist Maurice Asselin (Modèle assis sur le sofa (Model Seated on a Sofa: €1,000/1,500). Against all odds, he supported various "unfashionable" artists like Jean Aujame, Jacqueline Marval and Pierre Bollaert, always focusing on emotion and attachment to human beings. As can be seen with Picasso's L'Étude de plusieurs personnages dont Paul Fort et Henri Delormel (Study of Several Figures Including Paul Fort and Henri Delormel), a 1905 drawing with an estimate of €20,000/30,000, he liked painters with classical training who moved away from it to find their own paths and expressive means. Seeing how hard it was for some of them to exhibit in galleries and museums, with official institutions totally given over to post-war abstraction, Maurs finally sold his gallery in 1954, once more regaining his beloved freedom.