Across its history, Père Lachaise has reverberated with political rallies. Intended for the humble residents of western Paris, the cemetery soon became a contested political symbol that would inspire the mass protest—or “manifs—at the center of French political life 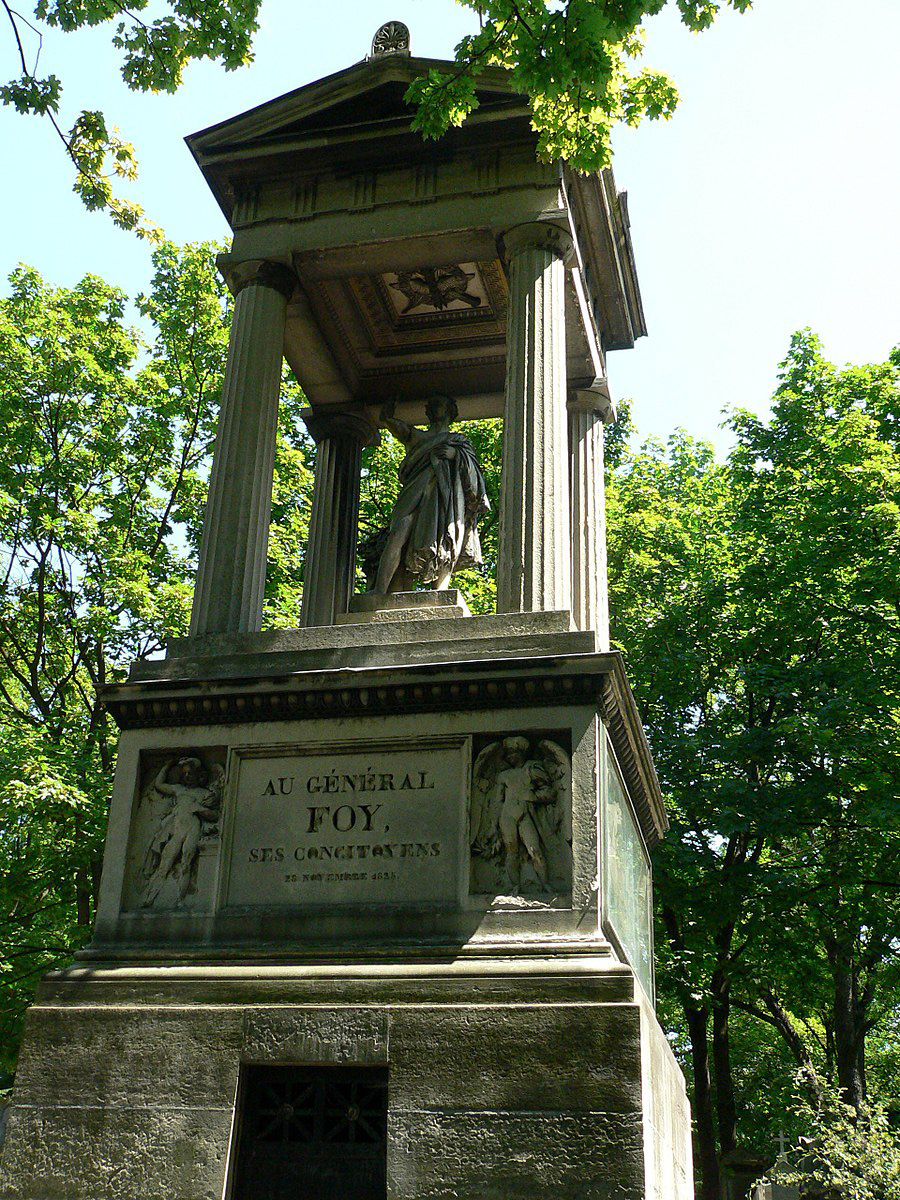 The first installment of this article discussed the novel opportunity for permanent burial that the opening of Père Lachaise provided the middle class in 1804. Marking one’s grave immediately gained importance as an instance of personal expression and marker of status within Parisian society. Stylistic choices communicated the deceased’s political beliefs, religion, and personal accomplishments. Echoing the stark divisions of early nineteenth-century French society, a Gothic flourish and coat of arms might indicate royalist sympathies for its association with Christian tradition, while an austere Roman-style altar placed one squarely in the Bonapartist camp.

The Political Funeral
Politicization of the cemetery intensified with the social conflicts of the Restoration (1814–1830), a period that opened with the shock of occupying Russian troops bivouacked in the cemetery. At Napoleon’s fall, the united powers of Europe restored the Bourbons to the French throne. Both Louis XVIII and Charles X insisted on royal prerogative, with Charles once declaring that public monuments should be reserved solely for the sovereign. Both kings also undermined the guaranteed liberties of free expression and assembly, such that a growing liberal opposition possessed limited means for publicizing its demands or commemorating its heroes. Under these circumstances, new funerary practices associated with Père Lachaise became an important platform for open contestation of the regime.

While funerals had traditionally focused on the procession to the church, the anticlericism of the post-revolutionary era emphasized accompanying the deceased to the cemetery. During the Restoration, the funeral cortege offered a restive population a rare opportunity for public assembly and political speech. Services for prominent dissidents mushroomed into mammoth expressions of discontent, with tens of thousands of Parisians filing to Père Lachaise to listen to rousing graveside orations. These events were often followed by public subscription drives to honor the deceased with a monumental tomb, a means of circumventing the royal monopoly on public commemoration. This launched Père Lachaise as an alternative semi-public space where dissent was enshrined under the guise of mourning, a practice that continued across the dictatorial Second Empire and well into the 20th century.

The monument to General Foy erected by Léon Vaudoyer and David d’Angers in 1831 is perhaps the most imposing example of political commemoration from the period. General Foy was a hero of the Revolutionary and Napoleonic Wars, who became a popular defender of individual liberties during the Restoration. His funeral in 1825 was attended by at least 40,000 sympathizers and the equivalent of nearly €3,000,000 was raised by citizens to erect a monument over his tomb. Foy was interred on a ridge of the cemetery where Napoleon had once proclaimed he would be buried with his generals. Although the Emperor was eventually laid to rest in Les Invalides, the concentration of monuments raised by Bonapartist families in Père Lachaise became a place of pilgrimage for the political opposition. The body of one prominent general was repeatedly exhumed and reburied to frustrate such devotion and the government quickly prioritized the sale of hilltop burial plots in an effort to crowd out further construction by its critics.

David d’Angers (1788-1856), who received the commission to sculpt Foy, was an ardent republican whose practice echoed his master Jean-Jacques David’s paintings that sought to shape public sentiment during the Revolution. The majority of the sculptor’s output focused on portraits of outstanding figures of contemporary thought and politics. D’Angers’ projet updated neoclassical aesthetics by representing men of the 19th century just as they were, eschewing the costumes and postures of the monuments ancient Romans had raised to honor important citizens. The Foy commission marked a midpoint in the artist’s approach to commemorative sculpture. As a model citizen for the ages, Foy is lifted out of his own time by being presented nude beneath loose drapery. That quasi-classical treatment is offset by a series of marble friezes installed on each side of the pedestal in which the figures are resolutely represented in contemporary dress. The bas-reliefs are purposefully simple in their treatment, assuming a linear style based on popular prints to depict key events in Foy’s life, including his funeral cortege.

Remembering The Commune…Or Not
Political commemoration in the cemetery became even more divisive in the wake of the 1871 Paris Commune. Taking advantage of the power vacuum provoked by the Prussian siege of Paris, anarchists and socialists declared a working person’s republic in the capital. This placed the Communards in direct opposition to the provisional government formed to treat for peace with the German invaders. The standoff ended with a brutal retaking of the city by national troops, since named the ‘Week of Blood’. The army fought and bombarded its way east across the city to Père Lachaise, where 200 partisans of the Commune made a final stand. After a dramatic battle among the graves, 147 Communards were summarily executed against the exterior of the cemetery’s south wall. The destruction and radical demands of the Commune horrified the nation, and punishment of the surviving revolutionaries was both swift and severe. It would not be until an amnesty in 1880 that the Communards were liberated from prison or allowed to return from exile.

It was natural for the surviving Communards to wish to commemorate their suffering at Père Lachaise. Their fallen comrades had been buried in a mass grave in the cemetery and the established tradition of the political funeral offered a familiar form of political contestation. In keeping with their anti-bourgeois principles the former Communards rejected the grandiosity of monuments like Foy’s and wished only for a simple plaque to mark the wall where the mass executions had taken place. However, fearful of encouraging future insurrection, the authorities attempted to sell off the plots associated with the common grave and banned any mention of the events on individual or collective monuments within the cemetery. It was not until 1907 that the site was named the Wall of the Communards and the desired plaque installed. By that point a relatively stable constitutional regime existed at the national level and inscriptions on gravestones celebrating the deceased as a former Communard were no longer threatening.

Following the Commune, worker’s protests were not authorized in the streets of Paris until roughly 1910. For anarchists and the socialist party, commemorative ceremonies at the Wall of the Communards assumed the same role that the funerals of opposition figures had during the Restoration. As early as 1880 the socialist press called for an annual gathering within the cemetery walls on the last Sunday in May. Unlike the masculine crowds of street protests that often ended in insurrection, these were respectful family affairs that included women and children. Their orderly nature was later invoked to convince the authorities to grant permits to political parties so that growing worker’s movements might march in the streets of the capital. The modern protest march, now an institution of Parisian life, can be said to have in part been born within the walls of Père Lachaise, where innovations of funerary practice and funerary architecture first allowed for personal and collective commemoration.