We visited Tate Britain to see Paula Rego’s (b. 1935) retrospective, the largest survey show of her career with over 100 works in 11 rooms. 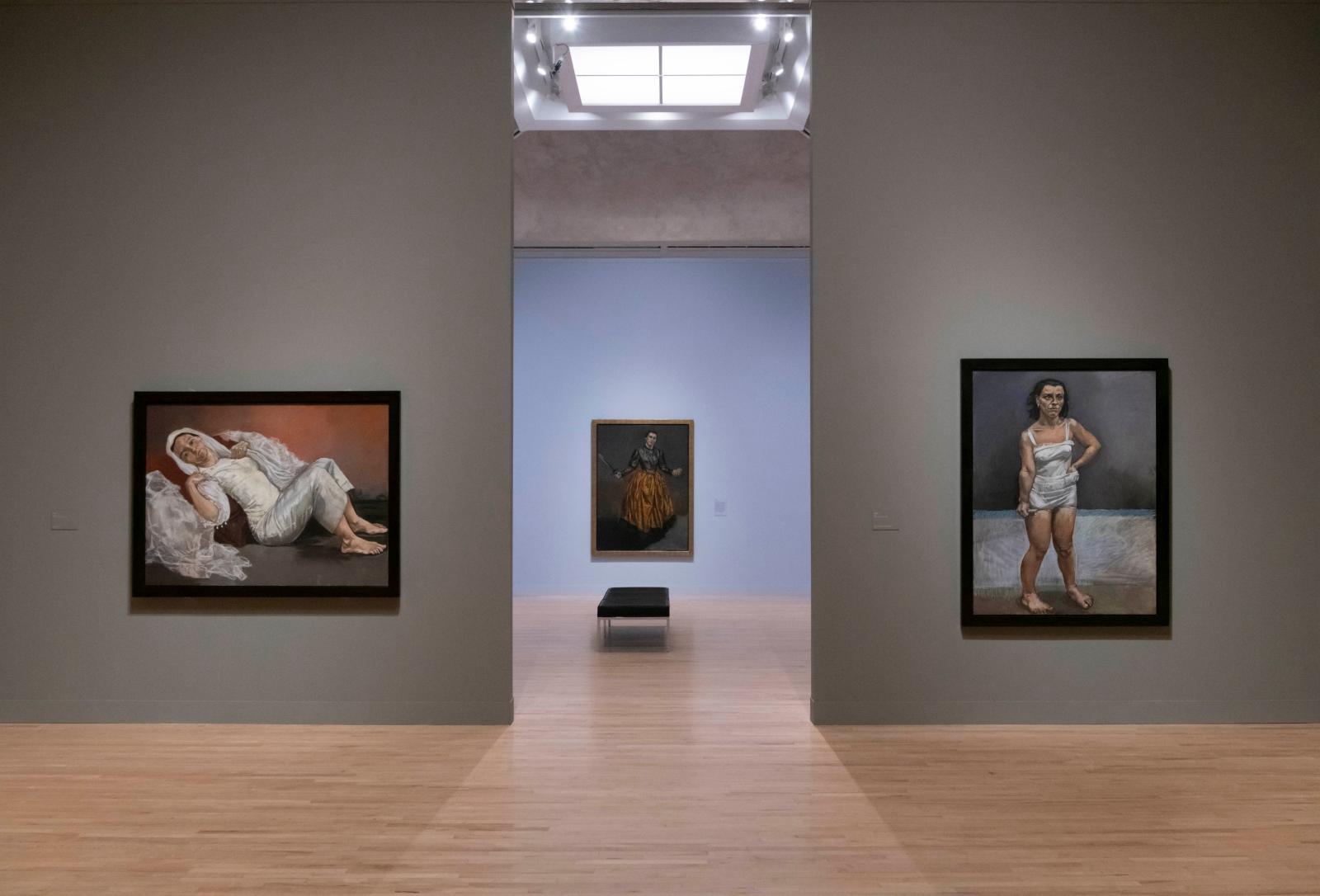 Paula Rego was born in Lisbon, Portugal, under the dictatorship of António de Oliveira Salazar (1889-1970) and the Estado Novo. Her family was fervidly anti-fascist and when she was 16, they sent her to a finishing school in Kent, England. She studied painting at the Slade School of Fine Art in London from 1952-56, where she met her future husband Victor Willing (1928-88). She has spent her life between Portugal and London.

What struck me about this exhibition in its totality is how aptly Rego’s paintings capture our female lived experience. I left the space feeling emotionally burdened by the artist’s and curatorial positioning. Speaking to the shop assistant at the exit, she noted the different reactions of men and women to the show: in which women left as anguished as the subjects of Rego’s artworks.

Salazar’s regime, which lasted until 1974, oppressed political freedoms and harshly denied the rights of women and workers. In her practice, Rego shifted between painting, collage and abstraction to find a language in which to articulate her vehement opposition to this dictatorship. In an early work, Salazar Vomiting the Homeland (1960), her rough and free technique allows for a raw and violent treatment of her subject similar to his treatment of Portugal. Unsurprisingly, when the painting was exhibited in Lisbon in 1971, his name was removed from the title, but the work conveys Rego’s provocative attitude. In the 1960s and 70s, she created bright colorful collages of anthropomorphic figures, composite forms and architectural elements in varied Christian iconographies and archetypes to express her anger towards the Portuguese handling of workers. In a similar style, she created her first self-portrait, in which she did not illustrate her face, but represented herself as a childlike small figure wearing a raincoat and hat. Her collage technique embodies her multilayered sense of self.

From 1984, drawing from her illustrations of Portuguese folk tales, she painted fiercely independent girls as protagonists, who were not afraid to express their sexual desires and frustrations. These paintings developed into the major large-scale acrylic pieces she worked on from 1986-1988, which stand together in the main space of the exhibition. The nine paintings address her personal narrative, especially her complicated relationship with her husband, who suffered from multiple sclerosis and died while Rego was painting The Dance in 1988. These pieces capture how a woman’s identity is shaped by patriarchal structures. Allegory, iconography and symbolism are rife, with animals and natural elements enhancing Rego’s storytelling. In The Maids, inspired by Jean Genet’s play of the same name (1947), Rego reverses the power dynamic of the upstairs and downstairs. The expressive faces of the maids, who murder their mistress, bring Rego’s mastery of emotion to a height. This room is the pièce de resistance of the exhibition, where Rego plays with the limitations and restrictions imposed on women adopting the tropes of classical and Christian imagery from the Old Masters.

Her most powerful images are her “Stories of Women”, portraying her lookalike model Lila Nunes, who became her main protagonist, in pastel on canvas. These show private moments of female experience laid bare, actions that were usually kept behind closed doors in preference to a ‘perfect’ exterior. Most poignantly in Dog Woman (1994), Nunes is depicted squatting and howling in an animalistic pose. These raw expressions of emotion continue in the 10 harrowing pastels Rego created in the wake of the 1999 Portuguese Abortion referendum. She captured women and girls alone after illegal procedures, forcing viewers to feel the power of their pain. While the agency of these figures has been taken away by the state, the curatorial choice to juxtapose them with Angel (1998), from Rego’s “Father Amaro” series, returns to us our fight for the rights of women.

The final room, titled ‘The Pain of Others’, is closed off with a trigger warning alerting the visitor to the violence depicted within. These works reveal visceral emotion in the pain of Rego’s subjects. While the news shocks us with harrowing stories so regularly that we are inured to it, Rego and her curators do not allow us that respite. This is especially true in Human Cargo (2007-8), a huge crucifixion triptych of works on paper in graphite, crayon and watercolor. In the same way that ‘He’ died for our sins, she makes clear that the victims of female genital mutilation and human trafficking are suffering under our watch. In light of Afghan women’s very real experience under new Taliban rule and Texas’ abortion laws, these works of art become even more relevant and remind us that we still need to fight for the rights of all women.

Ending the show on this forceful and harsh call to action, it’s as if Rego and the curators are saying do not forget those outside the ‘safe’ walls of the museum, because we have not. Returning to my feeling of being overwhelmed by her stark handling of emotion, perhaps the curators have given us too much of our own experience to contemplate in such a strong forceful show of emotion. We would probably have been more comfortable with more bitesize chunks. Yet it has been 50 years since Linda Nochlin’s seminal essay “Why Have There Been No Great Women Artists?” (1971) and we still need to reckon with the reality of unequal treatment of women across the field. We have a responsibility to make sure we create a more equal and fair world for future generations and Rego’s amazing retrospective makes sure we cannot forget.