After over three years of work, the Danish museum has reopened with a new extension housing its Impressionist works. It is the perfect occasion to look at an institution famous for both its French and Scandinavian collections and its architecture. 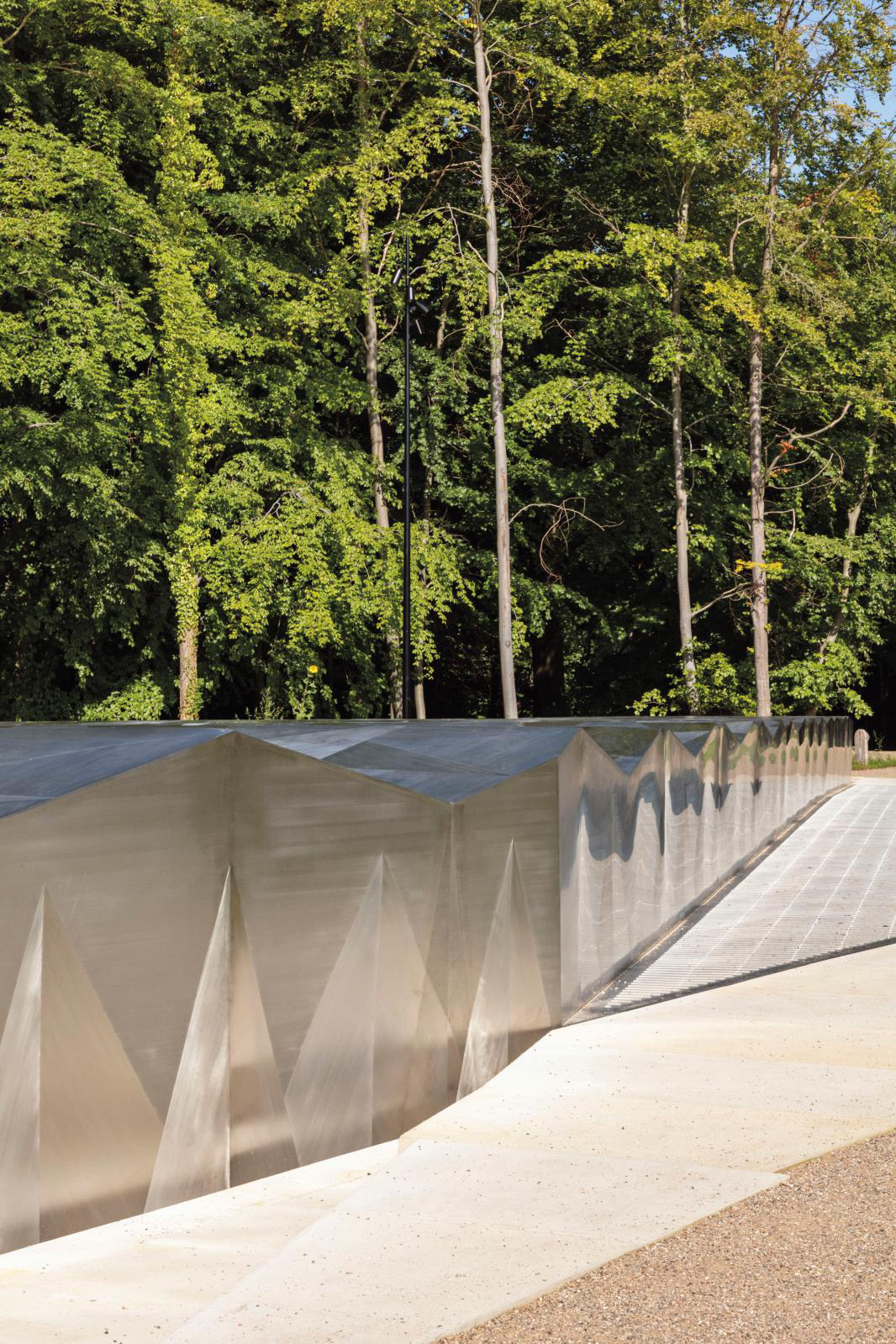 In 1918, Wilhelm Hansen (1868-1936), the head of the Hafnia Insurance Company and a keen art lover, moved with his wife Henny and their son Knud to Charlottenlund, six miles north of Copenhagen. They set up home in a bourgeois neoclassical mansion typical of the time, built for them by the fashionable architect Gotfred Tvede (1863-1947). Lying in the heart of the forest park of Jægersborg Dyrehave, the two-story mansion, with its numerous windows letting in natural light and splendid winter garden, soon proved too small to house Hansen's paintings. An adjoining gallery was built by Tvede to accommodate this private collection, which he opened to the public once a week. "When they arrived, Wilhelm Hansen and his wife wanted to share their collection with a large number of people in their home," says the museum's director Anne-Birgitte Fonsmark. Despite a few upheavals, the collection grew steadily. Hansen died in 1936, leaving 150-odd 19th and early 20th-century French artworks and a fine collection of Danish paintings from the same period. His widow bequeathed all this to the State in 1951, along with the manor. In 1953, Ordrupgaard officially became a national museum.

Zaha Hadid and a New Experience of Space
During the 20th century, the museum needed more space to host demanding temporary exhibitions," says the director. "Before 2005, we had to move works out of the main gallery each time to make room, although we used the second floor of the mansion—where we now have our offices—for this purpose." In 2001, a call for projects was launched. The seven competing designs included one by the Iraqi-British architect Zaha Hadid, and this was chosen by a panel of experts—one being the Norwegian firm Snøhetta, which later designed the final extension on the site. Completed in 2005, the 1,150-m2 building expanded to 3,300 m2, giving the museum an ultra-designer café, a store and, most importantly, more exhibition rooms. "The extension of Ordrupgaard provided an opportunity to explore new formal relationships between aspects of the original building and the garden around it," says its designer. On the outside, huge glass façades contrasting with a black washed concrete skin—whose shades change with the light and weather—make play with the surrounding landscape, almost inviting it in. With its cantilevered western tip, this "spaceship" with its amorphous, futuristic lines, as if suspended on a terrain with multiple levels, offers the fluid experience of its interior volumes. Ramps connect the old and new galleries and, as in many of Zaha Hadid's buildings, floors, walls and ceilings are not separated.


Snøhetta: An Impressionistic Architecture
As soon as the first wing was completed, questions arose about the conservation and display of the jewel in the museum's crown: the French collection. "About 40% of this, including some top-class works, was relegated to the storerooms due to lack of space," says Anne-Birgitte Fonsmark. A new extension was needed to present it in its entirety and preserve it "for future generations, in larger rooms, in optimum conditions of light and humidity." The project presented by Snøhetta Arkitektur Landskap AS, unanimously selected in 2009, was built last August. The agency has already produced some impressive projects, like the Oslo Opera House inaugurated in 2008, and the 9/11 memorial in New York (2011). In Ordrupgaard, the building includes three new rooms for the French collections and two more for temporary exhibitions, providing 1,750 m2 of additional space. "Mostly underground, Snøhetta's architecture [...] creates a holistic, continuous circuit through the museum, park and gardens, connecting Zaha Hadid's extension [...] to the original building and the permanent collection," as we learn from the firm's website. Seen from the outside, the structure forms an unobtrusive transition between Zaha Hadid's grand, outward-looking building, the mansion and the landscape. Only the steel roof of the central gallery housing part of the Impressionist collections is visible: an architectural response to the postulate of the French works, its wave-like facets make play with the constantly changing light. Inside, the floors and coffered ceilings, clad in oiled white oak, are set off by pastel green walls serving as backgrounds for the paintings, giving a soft, luminous feel to the whole.

A Collection of Gems
In 2017, the museum decided to take its collection on the road while awaiting the new building's completion: a grand world tour, stopping off at the Jacquemart-André Museum in France, the Pierre Gianadda Foundation in Switzerland, the National Gallery of Canada, the Royal Academy in London and the Palazzo Zabarella in Padua. While the institution is also famous for its collection of paintings by the Danish artist Wilhelm Hammershøi (the second largest in the world after the one at the Statens Museum for Kunst in Copenhagen), it also possesses one of Europe's most important collections of 19th and early 20th-century French art, from Romanticism to Post-Impressionism. These include Courbet's Le Change, épisode de chasse au chevreuil (Franche-Comté) (Deer Crossing During a Hunt in Franche-Comté), Corot's Pleine mer, temps gris, de Daubigny, Isigny, Les Hagues, Manche (Open Sea in Rainy Weather, from Daubigny, Isigny, Les Hagues, La Manche), a study for Renoir's Dance at the Moulin de la Galette, and Guillaumin's resplendent Quai de Bercy, Paris. Gauguin's flamboyant Portrait of Jeanne Goupil, a still life in saturated colors by Redon and Fauvist paintings by Matisse, Marquet and Vlaminck have now taken over the museum's new walls. "Driven by an unwavering passion," as Anne-Birgitte Fonsmark said in her presentation at the Jacquemart-André, "Hansen wanted to create a group of up to twelve works by every leading artist from Corot to Cézanne, with the aim of introducing French 19th-century art to Scandinavia."


Provenances and a Colorful History
Wilhelm Hansen spent lavishly during his business trips to Paris between 1916 and 1918. In 1916, he wrote to his wife: "I spend my free time looking for paintings [...] and have bought quite a few. However, I am certain that you will forgive me when you see these works, all of which are first class." He then mentions two Sisleys, a Pissarro and a view of the Rouen Cathedral by Monet. With other market players, including the Parisian art dealer Trotti, he created a consortium "to purchase large numbers of paintings in a short time at 'wartime' prices, where the association keeps the best and sells off the rest." According to Sophie Monneret, a specialist in Impressionist and 19th century painting, he was helped here by the French critic Théodore Duret, the Danish painter and art historian Karl Madsen and the Parisian dealers Ambroise Vollard and Georges Petit. She says that some works came from the first auction of Edgar Degas' personal collection, staged by the Georges Petit Gallery in March 1918. For example, lot no. 90, Alfred Sisley's La Fabrique pendant l'inondation (The Factory in the Flood), was bought for FF15,000 on Hansen's behalf through Trotti, as indicated in the 1997 exhibition catalog on the Degas collection at the Met Museum in New York. Again through Petit, he also bought paintings from the sale of the collection of enlightened art lover Alphonse Kann in December 1920. However, this "bulk buying" system had a downside: it required large amounts of capital and numerous loans. In 1922, the monetary crisis caused banks to go bankrupt. Hansen then offered to sell his works for one million Danish kroner—well below their real value—to the State, which refused. But though he was forced to sell 15 paintings to the Ny Carlsberg Glyptotek in Copenhagen, and others to the Swiss collector Oskar Reinhardt and Baron Kojiro Matsukata, he later began buying again. While its walls are full with outstanding art works, Ordrupgaard is one of those cultural venues that are interesting from several points of view. Lovers of modern painting and architectural statements will all find something to their liking here. But so will fans of Scandinavian design: on the same site, the house (in its original condition, with its furniture) of Danish architect Finn Juhl (1912-1989), which has belonged to the institution since 2008, is open to the public. Last but not least, the garden has acquired numerous contemporary sculptures over the past 12 years. Works by Jeppe Hein, Ólafur Elíasson, Tomás Saraceno, Carsten Höller and Klara Kristalova, to name but a few, have turned this natural park into an open-air, interactive museum. More than a "Mecca of Impressionism" according to Sophie Monneret, Ordrupgaard is a living space experienced through art, architecture and nature.