The Princeton University Art Museum reveals the design for the new building that aims to be “all fronts and no backs”: an accessible and inclusive space at the heart of the University’s campus. The construction will begin in 2021 with the opening scheduled for late 2024. 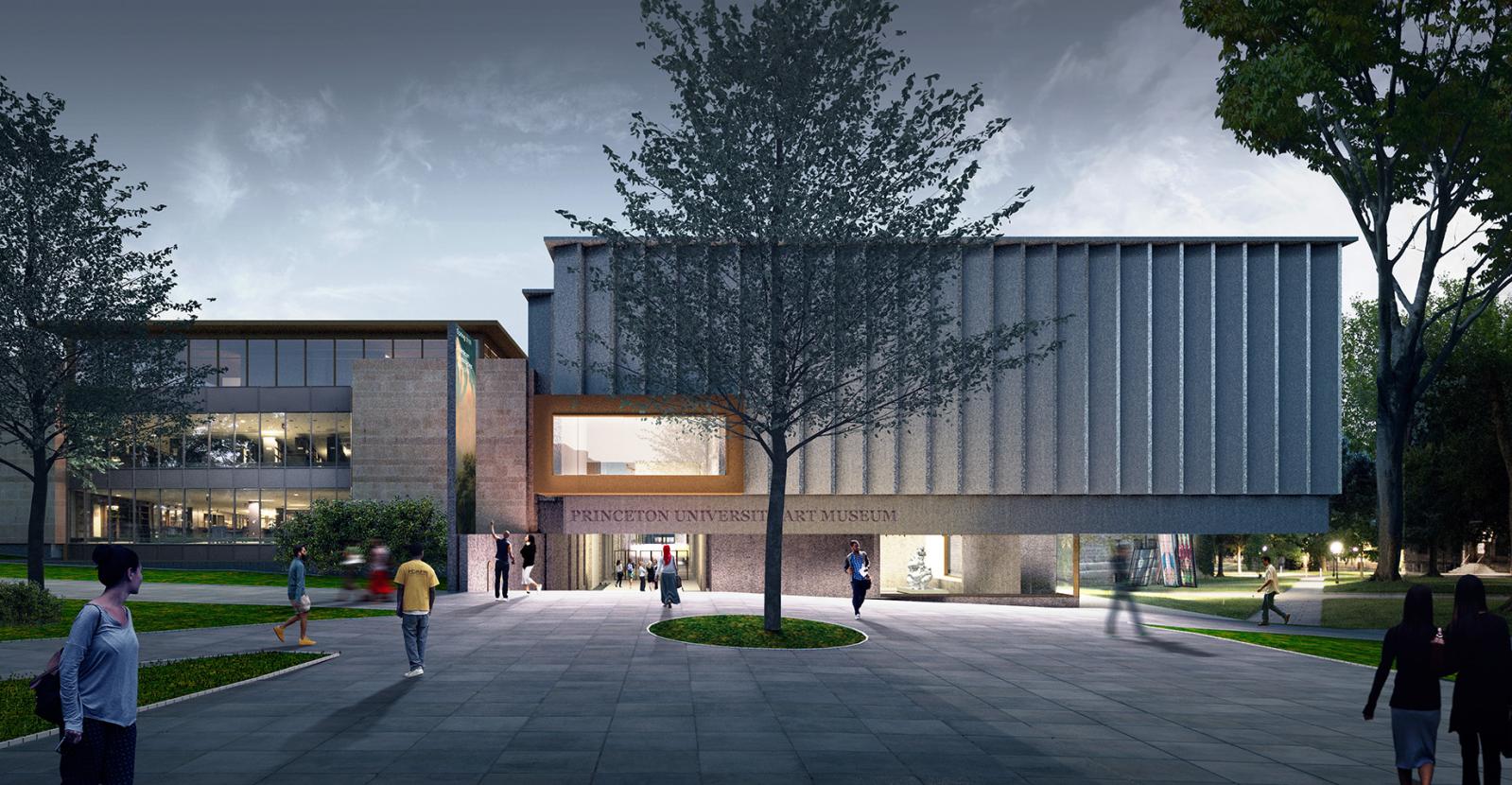 The future Main Entrance to the Art Museum, with a signature “lens” moment above, spilling light onto the terrace below.
© Adjaye Associates

The future Main Entrance to the Art Museum, with a signature “lens” moment above, spilling light onto the terrace below.
© Adjaye Associates

Designed by the award-winning Ghanaian-British architect Sir David Adjaye and his firm Adjaye Associates, in collaboration with executive architects Cooper Robertson, the new 43,963 square-foot building will almost double the Museum’s current size. It will replace the existing structures that date to the 1920s, 1960s and 1980s. The new three-story museum building will include seven main galleries on the first floor; offices, classrooms, and a rooftop cafe on the third floor; and a Grand Hall for lectures, performances and events, as well as a series of open spaces on the ground floor. The museum will have six ground-floor entrances, which will not only make it accessible from different points on campus but, according to the architects, will also help to mitigate the impact of future pandemics.

According to Adjaye
Adjaye describes his design as both “romantic and porous.” The multiple entry points aim to establish the new museum as an integral element within the University’s campus, encouraging easy circulation and connection to nearby buildings. The exterior design is built on the alternation of opaque and transparent surfaces. Large windows (referred to as “lenses” by the university) punctuate marble fins that cover the first and second floors, offering framed views of the Princeton campus. According to Adjaye, “Each one of these windows has its own character which refers to its view out. There is a kind of archway effect that emphasizes the landscapes of the campus.” At the same time, both the Grand Hall and the Grand staircase will create vast vertical openings within the Museum’s interior, visually connecting the three levels and offering glimpses of the collection displays from the ground floor. In the interior, the soft, organic palette of concrete and wood and pronounced grids of wooden beams that support skylights overhead are reminiscent of the Louis Kahn design for the Yale Center for British Art, which was completed in 1974. Developed with contemporary concerns in mind, the Adjaye’s building, nonetheless, positions itself in dialogue with a long history of university museum architecture.

Displaying the Collection
One of the principal achievements of the Adjaye design is the fact that it will allow the display of the Museum’s globe-spanning collections on a single level. This approach brings architecture and curatorial practice together as a means of privileging the ideas of cultural contact and exchange. It highlights a non-hierarchical approach to representing artifacts from different cultural contexts and opens new possibilities for storytelling through visual display. According to the Museum’s Director James Steward, “Sir David’s architecture will invite visitors to see themselves as citizens of a broader set of communities, which in turn will, we hope, nurture a deeper sense of our shared humanity. The design will give us a building that fosters new modes of investigation, reflects and deepens our commitment to equity and inclusion and affords new moments of aspiration and inspiration.”

The Princeton University Collection
The origins of the Princeton University Art Museum date back to 1882, when James McCosh, a Scottish educator and the head of what was then known as the College of New Jersey, charged William C. Prime, a New York journalist and a founding trustee of the Metropolitan Museum of Art, and General George B. McClellan, a former Civil War general and the governor of New Jersey, to design a curriculum in the history of art. Prime and McClellan both believed in the importance of object study. According to them, “a museum of art objects is so necessary to the system that without it we are of [the] opinion it would be of small utility to introduce the proposed department.” Commitment to teaching has remained at the heart of the Museum’s mission to this day, with its vast collection of more than 110,000 works of art ranging from ancient to contemporary periods actively used by the University’s students and faculty. In addition to added gallery space, the new building design includes open storage and classroom spaces, thus allowing additional opportunities for the University’s community to engage with the Museum’s collection in close proximity.

A Brief History of Place
The location for the new building is the same site that the Museum has occupied since its founding. The first building was a Romanesque Revival structure designed by New York architect A. Page Brown and completed by 1890. In 1922, the Museum was expanded with the addition of a new Venetian Gothic wing designed by Ralph Adams Cram, the supervising architect at Princeton University from 1907 to 1929, a period of a large campus expansion that gave the University’s campus its signature Gothic Revival look. In 1923, the entire building was dedicated as McCormick Hall in honor of the family of Cyrus H. McCormick, the founder of McCormick Harvesting Machine Company. In the 1960s, the old Romanesque Revival structure was demolished and replaced by an International style building designed by Steinmann and Cain architecture firm. In the late 1980s, McCormick Hall was expanded with the new Mitchell Wolfson Jr. wing, designed by Mitchell/Giurgola Architects. Steward describes the resulting structure as “dark and inward-looking” with a “hodgepodegy suite of additions over the years.” The new design aims to create a coherent architectural space that is in dialogue with the surrounding campus architecture through its use of traditional materials, while also looking to the future in its emphasis on open spaces, mobility, and accessibility.

Adjaye Associates was selected as the project architect for the new Museum in September 2018, in collaboration with Cooper Robertson as the project’s executive architect. Founded in 2000, Adjaye Associates operates globally, with studios in Accra, London, and New York. To date, Sir David Adjaye’s largest project is The National Museum of African American History and Culture in Washington, D.C., which opened in 2016. Among his other ongoing projects are a new home for the Studio Museum in Harlem, New York, the U.K. Holocaust Memorial and Learning Centre in London, and the Benin Royal Museum in Nigeria.