We spoke to Nazy Vassegh in advance of the opening of the inaugural Eye of the Collector at the historic Two Temple Place in the middle of London. From auction house to advisor to art fair CEO, she has created a new model for collectors, where the artworks take center stage. 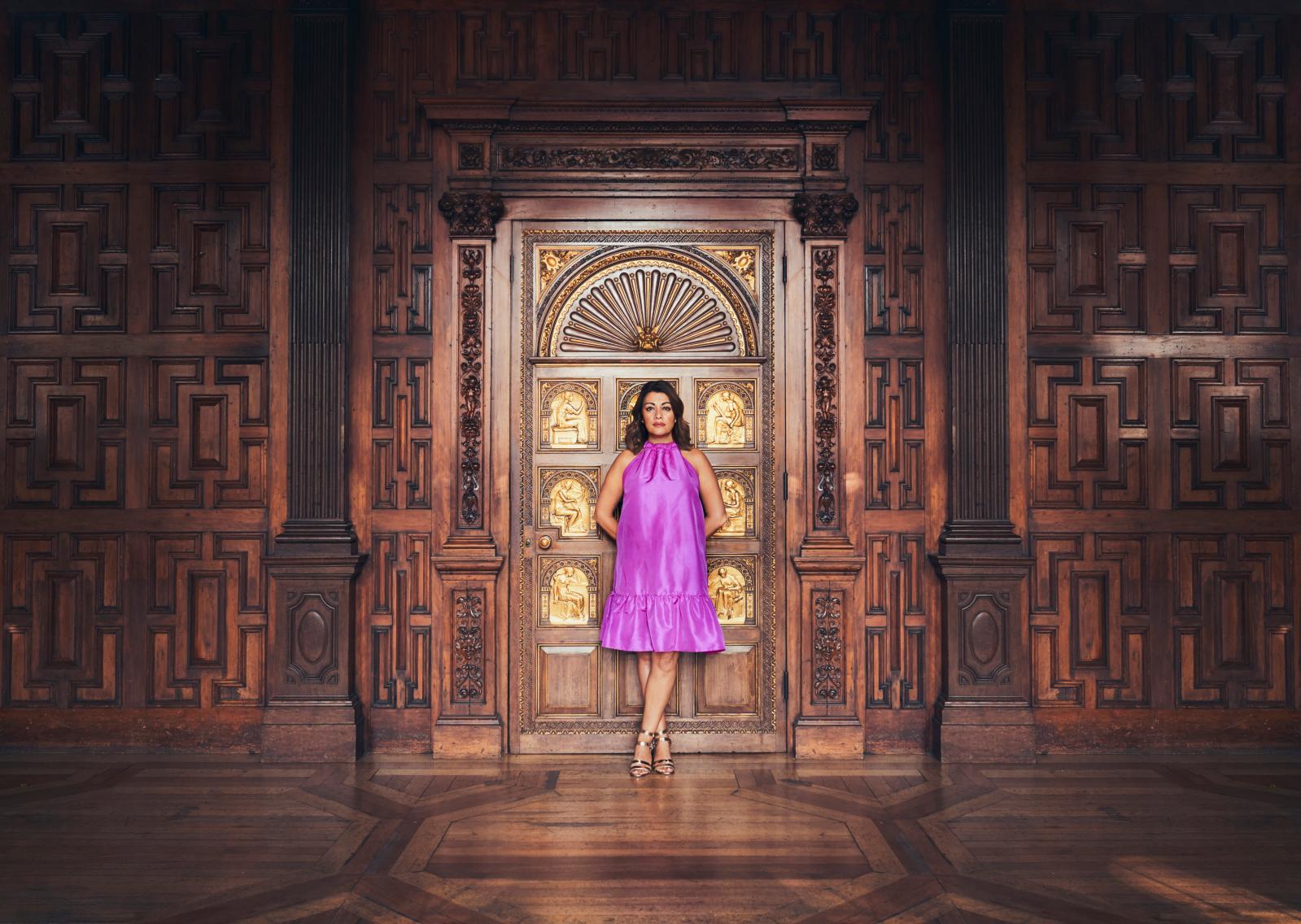 What were the reasons behind choosing Two Temple Place for Eye of the Collector?
Well, it’s an absolutely beautiful historic gem in central London, and the minute I walked in, I just knew it was fit for what we wanted to do. The Palazzos in Venice were a big inspiration for me, and I thought that Two Temple Place was a wonderful example of a Neo-Gothic structure, that was as close to a Venetian palazzo. It was the former private office and apartment of William Waldorf Astor (1848-1919). He spared no expense in creating this visual environment, because he worked with the then contemporary craftsmen and artists of the day to create the interior, so as you walk through, there are statues up the staircases, reliefs all around the walls and the ceilings. It all points to people that he admired in arts, culture and literature - he was a collector too.

Having previously been at the helm of Masterpiece, why did you want to create a fair without booths? How do you give galleries their own identities?
Having worked in the art world for as long as I have, I’ve seen the different aspects of this art ecosystem. The reason behind creating Eye of the Collector was that I wanted to put back the joy of collecting within an art fair landscape again. As an advisor, I could see that quite a lot of my clients were becoming fatigued by the endless white tents, and aisles and aisles of things to look at. I thought that it would be really interesting to present something in a boutique format, whereby the artworks were the heroes as opposed to brands or other distractions.

The way that we give the galleries their due presence and appreciation is by keeping it small, we only have 30 galleries, which will allow the visitor to absorb everything that they see. We’re also replicating Two Temple Place in an online viewing room, and that will allow people to have more time researching things and hopefully reach a global audience, who perhaps may not want to or be able to travel at the moment.

Last year the in real-life fair had to be postponed, what were the successes and challenges of the online viewing room you established?
We were meant to open physically in May 2020, and with the pandemic, we had to pivot really quickly. I didn’t want us to do nothing, so we came up with the concept of the Eye Viewing Room. We curated rooms, as if they would have been in situ, and they were really well received because we moved away from that traditional white box listing, which was what most people were doing at that time. It was really fascinating because we were completely new - this will be our first inaugural physical edition. We were blown away by the interest it seemed to capture people’s imagination at the time because of our curation. We were visited by around 92 countries, and we did sell some pieces, priced from €10,000 up to €500,000 for an established 20th century artist. We had no expectations, I did that viewing room really to thank my exhibitors for sticking with me and it was to keep us alive in people’s minds, so we were really pleasantly surprised.

Do you find that all artworks work in the setting?
The setting is extraordinarily adaptive, we’ve got works spanning 6000 years of art history, so there are pieces from 4,000 BCE right up to a few works that are being made especially for us. The backdrop is quite striking but it’s not overwhelming, we have got high ceilings and big windows, so I think things will look great in there. We’re using experts to help us light and display the works, so fingers crossed it’s all going to look fantastic. I believe you should look at artworks across timelines, I don’t think you should just see things within a certain genre or dateline. I’ve worked with collectors for a number of years, we don’t just buy one particular artist or one particular type of art, so all this is part of my experience and education in the art world.

When commissioning new works for this year’s edition, how were the artists selected and have they responded directly to the site?
We didn’t directly choose artists; we’ve been working with our galleries, who have suggested artists to respond to the site to make new works. We’ve got an incredible piece coming in by Susie MacMurray, she’s created a unique sculpture called Stalker, and its made from canvas and deer antlers. We’ve worked with Based Upon, who are bringing a sanctuary sculpture, which uses a blend of sound and light to create a meditative experience. We also have a curatorial committee and each member has chosen an artist to bring to the fair.

It’s all about looking at the art, creating new collecting pathways and having the discussions with us and our exhibitors. If you’ve got a Cycladic figure sitting on a mid-century table, you might view things slightly differently, it might change your perspective. The whole project has been extremely collaborative between us and the galleries, we’ve been working with them on the selection of the artworks all the way through. We know every piece that we’ll be showing, which is really unlike a traditional art fair, where you don’t actually know, other than the highlights you’ve been sent for press, what’s coming until the install days.

Your career has spanned art fairs to auction houses, and now to advisory and founding an art fair, what have been your most memorable projects or moments to date?
They’ve been quite varied, when I was at Sotheby’s, one of the highlights was launching Sotheby’s Preferred, which was the company’s structured CRM program for top-tier clients. It really focused on looking after the clients that brought most value to the company. It’s really exciting to launch something completely new in a company like Sotheby’s. I also remember the first time we went over the £100 million barrier in an evening sale in London when I was managing director of Impressionist and Modern Art, and that was quite a big deal at the time.

When I started my advisory, I think the most incredible thing was when I sold my first work of art, when I brokered the first deal and realized that I could do it. I’ll never forget that because prior to that I’d been in this big organization with lots of support around me, so it really nice to be able to do it on my own. What was great about was Masterpiece was that they created a new role of CEO, they wanted someone to go in there and put the fair on the international art fair circuit. I really enjoyed stripping it back and taking it to its essence of being about art, design and antiques, recalibrating the exhibitors that were showing there. Art is social and the social elements are important, but it’s also incredibly important that you have world-class artworks that people expect to see.

Without having a crystal ball, how do you see the art world and market going into 2022?
I think that the one thing that the last year or so has taught us is that we can’t just lie still. We’ve got to innovate, evolve and pivot in order to be vibrant and vital. I think that we’re going to see a lot more collaboration, people joining forces and looking at things differently. We mustn’t forget that we’re in this creative environment and it’s good to be creative in what we do as well and not to put up barriers. I think we’ll see a lot more happenings, a lot more collaborations as we move into 2022. I also think that online will continue to assist us, I don’t think it will ever replace in real-life experiences, but it’s a tool that we're all going to embrace more. I’d like to think that we’re going to get a little more creative on that front too. Everyone has a different story right now, about the known and the unknown and I think we all have to be adaptable, look to each other and work together. Creativity doesn’t end at one point, it should keep going, at the end of the day we’re here to support artists and artworks and that’s the center of our nerve system. It’s really important not to lose sight of that.

I know you do collect, what do you focus on in terms of art, and if there was one artist you could own, who would it be?
My husband and I do collect. We collect things that we absolutely love; I have no thematic element to my collecting. We have some 20th-century artists, some contemporary artists and we like mid-century and contemporary design too. If there was an artist I would love to have, I would love to have a work by Lee Krasner. I love her work and the fact that her talent got eclipsed by the fact she was married to Jackson Pollock, I think she is phenomenally talented.

Covid-19, the Moment the Art World Was Forced to Go Digital