Every two years, Alexis and Nicolas Kugel introduce us to an unknown or unusual field in the world of artefacts. This year, tortoiseshell inlaid with mother-of-pearl and gold "piqué" work awaits us in the Hôtel Collot. 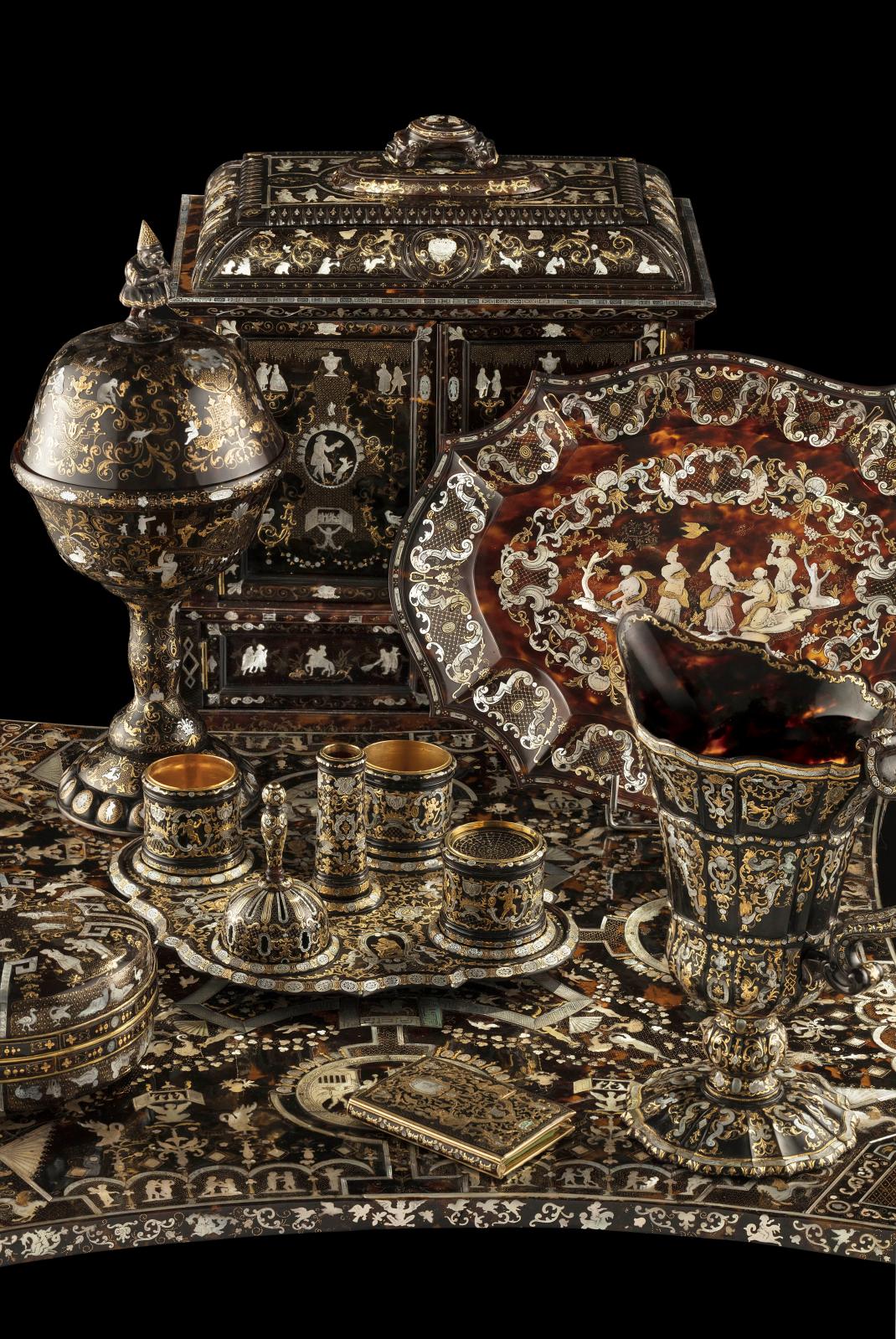 The Kugel brothers have accustomed us to spectacular exhibitions, which sometimes involve leading museums like the New York Frick Collection or the St Petersburg Hermitage. After the silver-gilt work of Strasbourg and the automata clocks of the Renaissance, star billing now goes to objects in tortoiseshell inlaid with gold and mother-of-pearl. Few and far between on the market (apart from the major Qizilbash collection, which went to auction in Paris in 2016), the objects brought together here provide a unique opportunity to discover an art as little-known as it is appealing. Imported from Asia and Africa by Portuguese companies from the Renaissance onwards, tortoiseshell was first used in fashionable accessories like combs, brooches and fans, or in cane and weapon handles. Cabinetmakers then began to combine it with ivory and silver to provide a framework for precious wood compositions, before André-Charles Boulle made it one of the components of his famous marquetry work. To work it, the material had to be heated with boiling water and olive oil before being moulded and shaped. But what gave it an unexpected beauty was the use of gold and mother-of-pearl: a technique that appeared simultaneously in Paris, the Netherlands and Germany in the early 18th century. Initially, gold and mother-of-pearl were inlaid in the form of cut-outs, as in marquetry. Then different inlay techniques were developed: the actual "piqué" consisted of setting a gold thread in the still-soft tortoiseshell before cutting it, while "coulé" involved stretching several gold threads and pressing then into the tortoiseshell horizontally. Only the Neapolitan tartarugari (from the word tartaruga: "tortoise" in Italian) combined plates, lines and points to make the tortoiseshell scintillate with all the virtuosity of embroiderers.

Neapolitan excellence
The rapid rise of these workshops owes much to the accession of the King of Spain's son, Charles of Bourbon, to the throne of Naples in 1734. The first sovereign to live there, he decided to develop the cultural role of his capital. The most famous tartarugari, Giuseppe and Gennaro Sarao, Antonio de Laurentis, Julian Tagliaferro and Nicola de Turris, set up shop in the Royal Palace square. Like Capodimonte porcelain, their work was soon used as traditional diplomatic gifts offered to embassies by the King at ceremonial receptions. The importance accorded to the embassy of the Sublime Porte in 1741 explains why many of these "piqué" pieces are now in Topkapi Palace. "Piqué" tortoiseshell items were also the ultimate souvenirs for English people who had done the Grand Tour. The most commonly-found objects embellished in this way were little boxes, snuffboxes, caskets, ewers with basins, liqueur cabinets, candlesticks and writing cases, while small cabinets and miniature armoires were somewhat rarer. There were also a very few pieces of furniture like the table loaned to the exhibition by the Hermitage Museum.

The science of ornamentation
Like all craftsmen, the tartarugari needed models for their decorative work, which they found in compendiums published in Paris and particularly in Augsburg: a Mecca for the pirating and recycling of ornament engravings. While some extraordinary pieces took their iconography directly from Renaissance grotesques or those of Jean Bérain, Augsburg craftsmen like Paul Decker the Younger and Jean Christoph Weigel provided a "well-tempered Baroque" ornamental vocabulary that could be used throughout Europe. Their bands, foliage and frames were ready for use by glass engravers, silversmiths and our Neapolitans alike. Starting in the 1740s, rococo ornamentation gave an even lighter touch to the gold embroidery work of snuffboxes and "dance cards". To enliven the surfaces, Martin Engelbrecht, an Augsburg publisher and engraver, offered collections of "ready to cut" European or Chinese figures. The quality of the decoration depended on the talents of the artist, who had to make the ornamentation dialogue with the figurative without either dominating the other. An examination of these objects reveals a wealth of surprises, shifts and collages. On a closer look, you realise that the most coherent scenes break up into different little stories: in the background of a dish, a Westerner chats with a Turk; further on, you discover a shepherd with his dog, and further up, antique ruins. Each isolated subject floats in a little cloud formed of a transparent network of golden points. In small furniture or objects, grotesque ornaments give a regular structure to the surfaces, but with the top of a writing case, for example, the arrangement of the hollow sections designed for accessories gives the foliage and decorative cartouches a chance to flourish more chaotically. You find little chinoiseries in the interstices, like a winged dragon. Sometimes the ornament itself comes to life, as when two dotted antennae turn a cartouche into a butterfly. Sometimes networks of dots make play between each other, like Op art before its time, such as foliage frolicking over a regular geometric network. This is where tortoiseshell plays such a magical role: it provides the background for the combinatory scene that unfolds, but its marbling and irregular surface joyously confuse the view. If the object is moved a little, transparency takes precedence over opacity, and one image disappears to be replaced by another, adding to the sense of intriguing mystery.

A passion for the Rothschilds
In the 19th century, leading collectors like Lord Hertford, his son Richard Wallace and the Goldsmid, Stern, Salomon and Rothschild families, took over from the "grand tourists" of the previous century. They were often supplied by major antiques dealers specialising in "curiosity" objects like the Löwensteins, established in Frankfurt, Vienna and London, or, a generation later, Frédéric Spitzer in Paris. The Rothschilds were particularly keen on these creations, like Baron Mayer Carl of Frankfurt. At his death, part of his collection went to his daughter Adèle, Baroness Salomon de Rothschild, who left a large proportion to the Louvre. In France, James and Gustave de Rothschild took an interest in them, and in England, Lionel and Ferdinand – who left his collection to Waddesdon Manor, where it can be seen to this day. In the erudite catalogue accompanying the exhibition, Alexis Kugel cannot resist the pleasure of citing one last collector, Queen Mary, who made a habit during her visits of enthusing so pointedly about the objects she liked that her hosts were obliged to give them to her… the very next day. The piqué pieces in the Royal British collection still bear witness to her taste.