Mucha will be occupying the Musée du Luxembourg over the winter. Meanwhile, auctions have been featuring his iconic works all year round: proof of his enduring success. 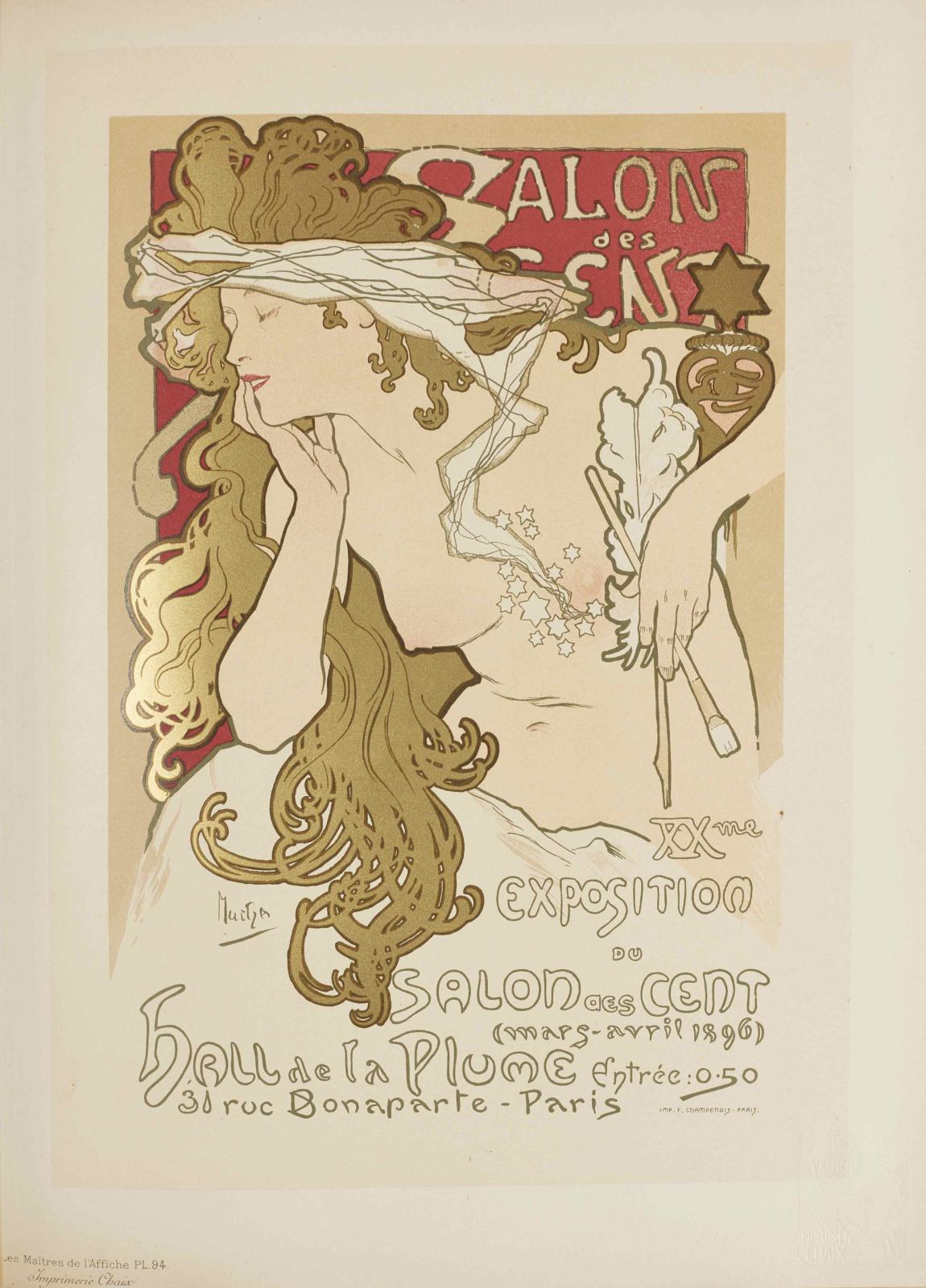 The Paris exhibition jointly staged by the Musée du Luxembourg and the Mucha Foundation in Prague presents a comprehensive view of the artist’s creative achievements, going beyond his contribution to posters and advertising alone. It presents a far more complex portrait of Alphonse Mucha, who also explored a form of historical painting with a patriotic, epic and even esoteric touch, aspiring to the unity of all the Slavic peoples. But this facet is barely evident at auction, as his decorative vein is virtually omnipresent, and collectors do battle for his posters and illustrative projects. The “Mucha style” reigns supreme.

Sarah and Mucha
His remarkable career might easily never have taken off, so much did it depend on a series of coincidences. Mucha was already 27 when he arrived in Paris, where he was unknown in the realm of illustration, and eked out a living from odd jobs and drawing lessons. Then in December 1894 he landed a replacement job at Lemercier, the printing house. That winter, Sarah Bernhardt (1844-1923) was at the peak of her career as a tragic actress, yet “Gismonda”, in which she had been playing the title role at the Théâtre de la Renaissance since November, was no longer commanding full houses. The audience had to be lured back. So she commissioned a poster from Lemercier: four thousand copies for immediate distribution. But it was Christmas, and the staff were on leave. Lemercier had no choice but to put his faith in the newcomer. Mucha set to work. He depicted a hieratic Sarah Bernhardt, haloed in gold against a mosaic background and holding a palm: a subject taken from the play’s final act. According to the exhibition catalogue, the actress was completely won over, and exclaimed “Ah! How beautiful! From now on you shall work for me, by my side. I like you already.” Mucha signed a six-year contract with Bernhardt, creating not only posters but also stage designs and costumes for her productions. His career was launched. The lithographed “Gismonda” posters are some of his most sought-after pieces, and although 4,000 copies were printed, they rarely appear at auction, especially in such good condition. Unsurprisingly, the particularly fresh-looking one sold by Aguttes on 13 February 2013 went all the way up to €29,325, one of the highest bids ever made. Copies with more faded colours achieve €3,000 at most.

The Period of Fame
Mucha created a new style of theatre poster, with highly original graphics and a line as “clear and white as a lily”, according to the critic Charles Saunier. The tall, narrow format allowed for the near life-size depiction of the model’s full-length figure. The use of pastel colours, subsequently highlighted with golden-brown, bronze or silver tones, stood apart from the “colourful mayhem” of Jules Chéret and Toulouse Lautrec. Lastly, the calligraphy incorporated the informative text into the image without creating an imbalance. The “Mucha style” swept across Europe alongside Art Nouveau, of which he became the standard bearer. The artist produced six more posters for the Théâtre de la Renaissance, including one for “La Dame aux Camélias” in 1896 showing the protagonist as a modern, chic Parisian woman. The art form was disseminated further by “Les Maîtres de l'affiche”, a monthly publication featuring reproductions of the best poster designs by leading French and foreign artists. At auction, individual reviews regularly fetch a few hundred euros apiece. But complete series, published by Chéret from 1895 to 1900 (each issue featuring four A3 (30 x 40 cm) chromolithograph posters) attract bids of a very different order: for instance, €72,685 at Ferri & Associés on 11 April 2018 for a set also including eighty fold-out posters.

Advertising and Trade
In 1896, Mucha signed a contract with Ferdinand Champenois (1842-1915), who founded the eponymous printing house in 1878. Champenois took over the publication of posters for Sarah Bernhardt’s performances from Lemercier. The company’s product quality was rapidly spotted by major brands of the time and helped to gain public recognition for Mumm, Ruinart, Moët and Chandon champagne, Job cigarette papers, Bénédictine liqueur and La Meuse beers. Not to mention the famous Lefèvre-Utile biscuits: recently, during the first sale of the Olivier Fruneau-Maigret collection on 19 September with Leclere, a label designed for tin boxes of vanilla wafers, printed in around 1898, sold for €1,040. The second part of the auction should be revealed in December, but an ink drawing, “Les Femmes aux fleurs” (a preparatory sketch for the biscuit container), has already been announced at €15,000-20,000. This collaboration did not stop at advertising, however. Mucha also designed purely decorative, aesthetic panels devoid of text, and produced the “The Months”, “The Seasons”, “The Arts” and “The Zodiac”, all designed to establish a new art form appealing to a broader audience. In today’s rather different times, these prints achieve considerable sums. A complete series of the “Four Seasons”, printed in 1900, fetched €51,000 with Aguttes in 2015. There’s no denying that the artist’s style has reached a certain peak.

The Wings and Legs of Art Nouveau