This 1665 work is emblematic of the 17th-century flower painter’s precocious virtuosity and one of his early masterpieces. 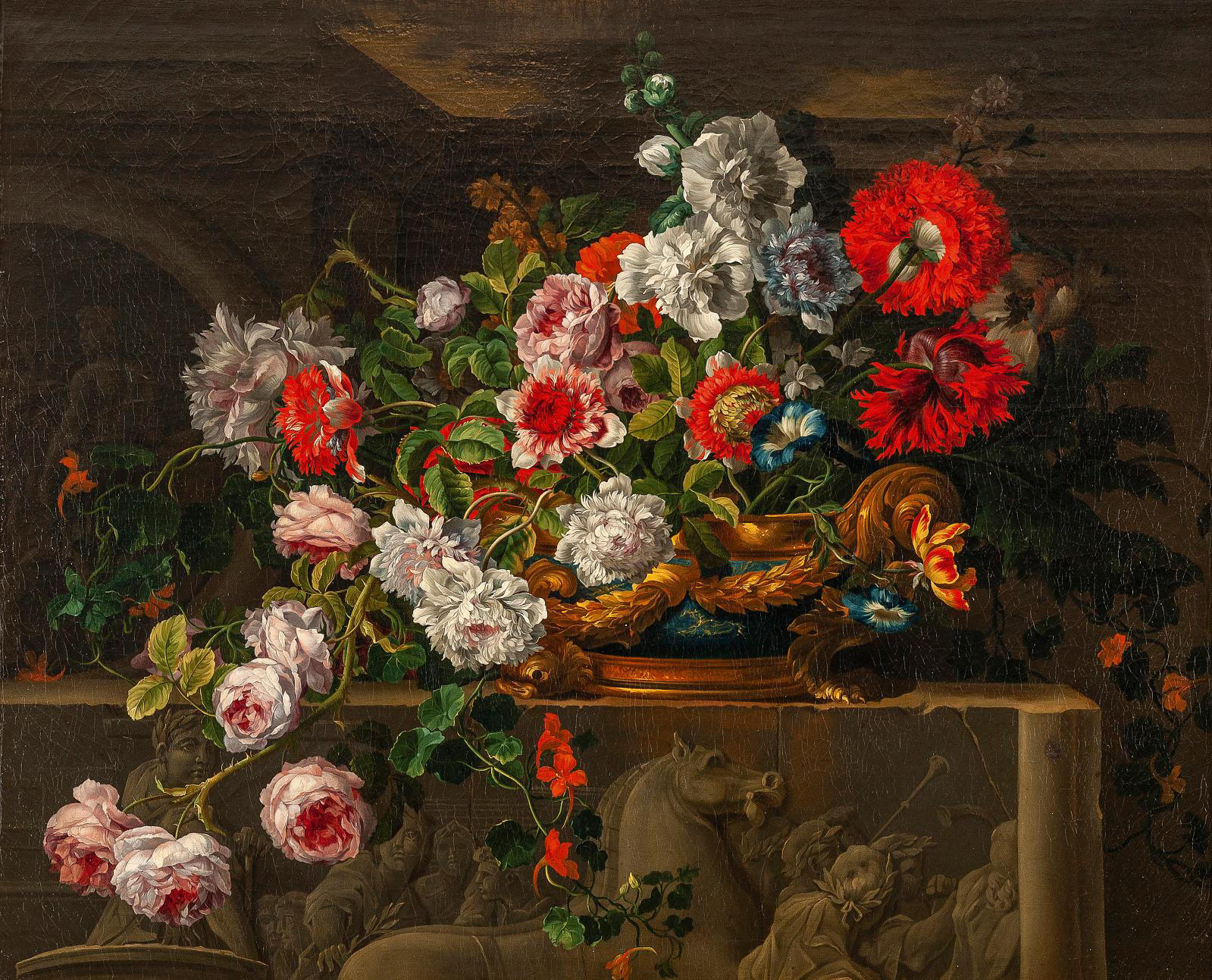 The lavish Baroque bouquet cascading along a bold diagonal line in this opulent still life is characteristic of work by the French artist Jean-Baptiste Monnoyer (1636-1699). The refined, gold-mounted lapis vase responds to the flowers, which is common in work by the artist, who liked to include precious containers in hardstones or goldsmith's work in his compositions. The vase, on a classical bas-relief featuring the triumph of a Roman emperor—a discreet nod to Louis XIV—heightens the majesty of the whole. Yet, under the appealing mask of a still life, the work could just as well be teaching the lessons of vanitas, combining the flowers’ fragile beauty with the ruins of the past. In any case, that is the opinion of specialist Claudia Salvi, who, with expert René Millet, attributed the work to Monnoyer and will include it in the catalogue raisonné she is currently preparing.

Dated 1660-1665, the lavish painting is among Monnoyer’s earliest successful efforts. Flowers such as peonies, nasturtiums and anemones, later abandoned by the artist, substantiate the dating. The picture can also be compared to several major works of this period whose dates are known, starting with Fleurs, fruits et objets d'art (Flowers, Fruits and Objets d'art), his virtuoso reception piece at the French Royal Academy of Painting and Sculpture in 1665, now in Montpellier's Musée Fabre, and Fleurs dans une cuvette d'argent ciselé posée sur un entablement sculpté (Flowers in a Chased Silver Bowl on a Carved Entablature) in Caen’s Musée des Beaux-Arts.

The painting’s provenance is no less illustrious. When the famous art dealer Jean-Baptiste Pierre Lebrun sold it on October 1, 1806, he mentioned in the catalog that it came from the cabinet of Mr. Lollier, a Parisian collector before the French Revolution. As number 160, it was presented as a work of Monnoyer's assisted by Sébastien Bourdon for the ancient frieze. In March 1870, it was sold at Drouot, but attributed to Jean-Baptiste Blin de Fontenay (1653-1715), at the dispersal of the marquis du Blaisel's collection. His descendants have kept it ever since, soon to reappear under its true identity.