Marino Marini and the Angel's Phallus...

This plaster sculpture sheds light on the origins of a myth: that of Marino Marini's The Angel of the City, known all over the world through the provocative version standing at the entrance of the Guggenheim Foundation in Venice, on the Grand Canal. 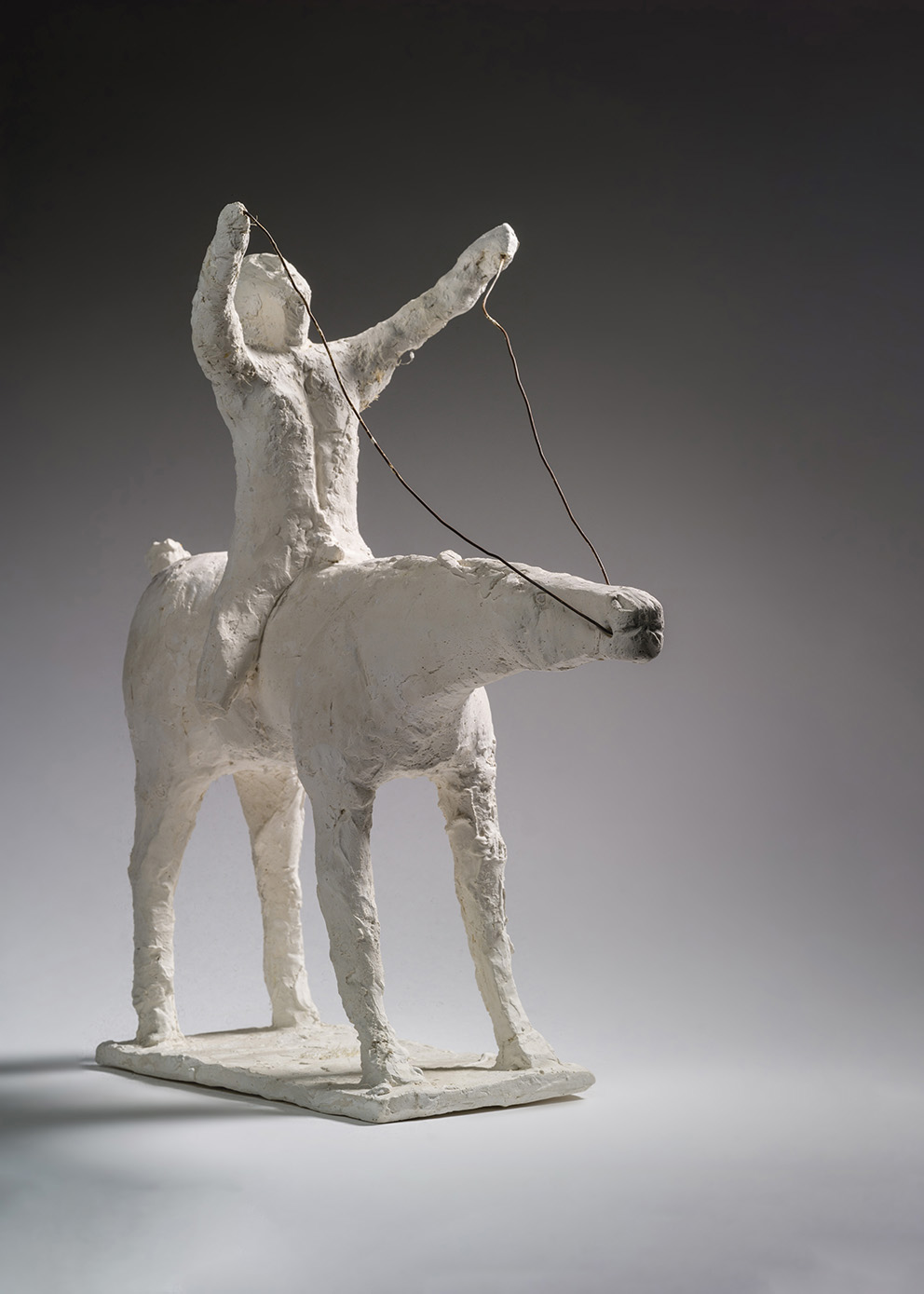 The Italian expressionist artist was never moved by the equestrian statues proliferating in Italian cities, like Verrocchio's Colleone in Venice or Donatello's Gattamelata in Padua: he felt they were all too monumental and heroic. However, he said that in 1934, he was struck by the statue of a young horseman in the choir of Bamberg Cathedral in Germany. "This horseman made a great impression on me, probably because he came from a legendary, far-off world in a lost country." Marini was fascinated with the unreality of this youthful and radiant figure, traditionally considered a portrait of Emperor Henry II, who was canonized and buried in the building. And yet there is nothing imperial about his crown... Could it be his brother-in-law, Stephen I of Hungary, a saint also highly venerated in Bamberg, or simply an allegorical representation of a "holy man" or even the Christ of the Apocalypse? At any rate, the seeming innocence of this unarmed horseman without any symbols of power allows for all kinds of interpretations.

The End of a Myth
Marini's first horsemen are still bathed in innocence. The small bronze Gentleman on a Horse of 1936 and The Pilgrim of 1937 are charming dolls. They seem to hesitate and take their time, on the verge of an adventure they both long for and dread, while their mild colts wait patiently. From 1950, the body becomes tauter and more intensified; the horse rears, and the rider lifts his arms to the sky in confusion. Then the imbalances turn violent: the bodies are braced, the steed turns an almost phallic head towards a petrified rider until, at last, il miracolo is accomplished. The horse runs, the rider is thrown backwards... but still clings on, becoming one with his mount in increasingly tense, simplified and violent couplings, which by the early 1960s take the form of concentrated, expressionist compositions. "My equestrian statues express the agony caused by the events of this century. The anxiety of my horse increases with each new work, while the horseman becomes ever more exhausted. He has lost control of the beast, and the disasters he succumbs to resemble the ones that destroyed Sodom and Pompeii." Marini, who had experienced the violence of war and fled into exile in Ticino after his studio was bombed, was scarcely more at ease in Cold War Europe. He saw himself as a Roman "waiting for the barbarians": "My aim is to show the last moment in the dissolution of a myth: the myth of the heroic, victorious individual, the 'brave man' of the Humanists." But perhaps this end of a myth is a sign of a metamorphosis, the dawn of a new age.

Convulsive Beauty
The extremely rare plaster copy of The Angel of the City up for sale behind closed doors with Tessier & Sarrou et Associés adds to our understanding of the work's origins. The horseman still seems to have the situation under control: he holds the reins; his arms are supple and almost imploring, as if the coming event were expected and desired. Two other versions in wood and bronze (both polychrome) and the 1948 Guggenheim Foundation version express more tension: the arms are stretched out, the reins abandoned, and the silhouette exaggerated. A "convulsive beauty" destined to be a great success. As Peggy Guggenheim said, "It was a statue of a horse and rider, the latter with his arms spread out in ecstasy, and to emphasize this, Marino added a phallus in full erection. But when he had it cast in bronze for me, he had the phallus made separately, so that it could be screwed in and out at leisure. Marini set up the sculpture in the courtyard, on the Grand Canal, opposite the prefecture, and named it The Angel of the Citadel [...]. When the nuns came to be blessed by the Patriarch, who on special holy days went by my house in a motorboat, I detached the phallus of the horseman and hid it in a drawer." It was rumored in Venice that Peggy had several members of different sizes to choose from. Today, to avoid any temptation to visitors, the phallus seems to have been permanently fixed. And surely its presence at the entrance of the residence harks back to the traditional Pompeiian tintinnabulum purported to bring good luck…