In the sixth century, its iridescent nuances were already enlivening the mosaics at Ravenna’s Basilica of Saint Apollonia. Fragile and long inimitable, mother-of-pearl, also known as nacre, was used as a precious material to decorate cabinets of curiosities, jewelry and even garments. 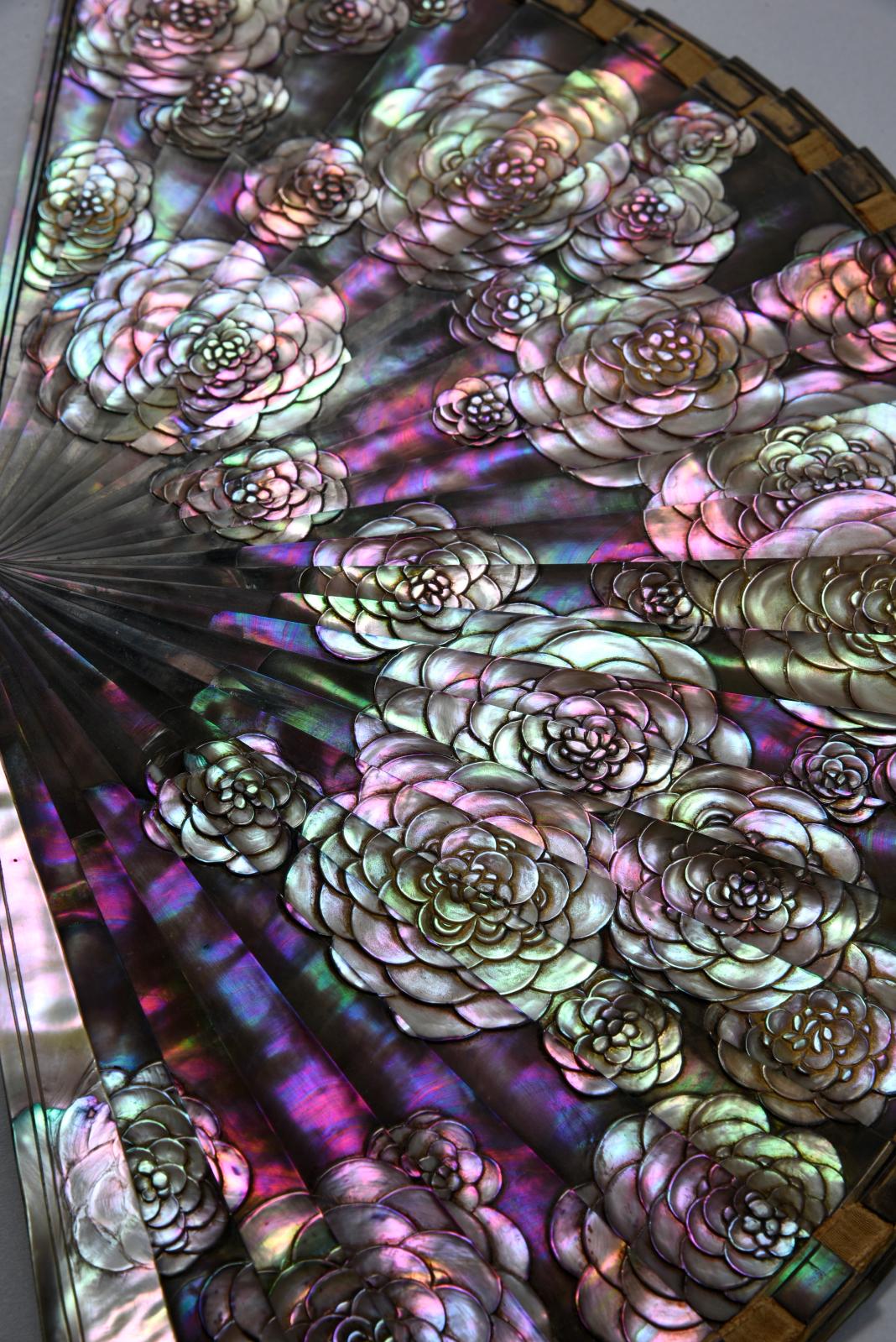 Mother-of-pearl is a durable, resilient material that mollusks secrete on the inner surface of their shells to protect them from cracking. Although produced by all gastropods and bivalves, it is not equally bright in all species. The most precious examples come from 16 species found mostly in the Pacific, including the pearl oyster, burgaudine, haliotis and trochus. Demand for their shells is so high that they are protected by the Washington Convention. Some beautiful mother-of-pearl is also found in eastern seas and even in freshwater. In the Middle Ages and modern times, supplying Europe with this fragile, expensive material accessible only in small amounts was as challenging as working with it.

The shell must be polished to expose the nacre before it is painstakingly cut with a saw into veneer sheets that can be assembled in patterns or plates. Similar to the grain of wood, the layers’ natural movement facilitates the cutting and determines its direction. While Asia has long experience using this method, which it combines with black lacquer, the art of mother-of-pearl was still in its infancy in the West during the 13th and 14th-centuries. After the turn of the 15th century, it entered cabinets of curiosities with the humanist vogue for naturalia.

It is no coincidence that the goldsmithing cities of Augsburg and Nuremberg also became famous for mother-of-pearl: the tools of the trade were suitable for both crafts. Several workshops also stood out in Antwerp, Amsterdam and Paris. Master craftsmen soon excelled in decorating and mounting spectacular mother-of-pearl nautilus shells with gold, vermeil or silver. In 16th-century Nuremberg, Wenzel Jamnitzer and Nikolaus Schmidt were the most famous. In the 18th century, German-born Dirck Van Rijswijck (active in Antwerp and Holland) inlaid black marble and ebony like a painter, and his mother-of-pearl paintings are still in high demand today. Meanwhile, the virtuosity of Amsterdam-based artist Cornelis Bellekin earned him comparisons to Rembrandt.

All of them cut and carved mother-of-pearl brought back by the East India Company into bas-reliefs. The grooves engraved into the material were sometimes inked to obtain contrasts with the designs on the iridescent background. Objects, especially chests, were often veneered with mother-of-pearl from Gujarat, India, the world’s most famous supplier in the 16th century. In this case, only the mounts were European. Franciscan monks in Bethlehem, an unexpected competitor, brilliantly applied their skills to the production of mother-of-pearl items, especially religious ones, including Nativity scenes, rosaries, crosses and candlesticks.

In 17th and 18th-century France, creations by craftsmen working with precious materials were less opulent but exquisitely refined, finding their highest form of expression in the costliest fans. Like bone and ivory, mother-of-pearl adorned cutlery handles, cane knobs, opera glasses and dance cards. The craft spread to French city of Méru, in the Oise, which in the second half of the 16th century took advantage of the influx of the material from the ports of Dieppe and, later, Le Havre. Artisans developed remarkable skills in Méru, which became an outstanding production center showcasing French taste and standing out particularly in mounting fans. Meanwhile, mother-of-pearl became a highly valued material for inlaid musical instruments, mirrors, weapons and small pieces of furniture.

Eastern Influences
Orientalism blossomed in the 19th century, showcasing a long tradition of furniture and objects inlaid with iridescent materials. Craftsmen in Damascus, Cairo and Istanbul were the talented heirs of this Ottoman art form, which thrived in the 16th and 17th centuries. It peaked in 1610 with the throne of Sultan Ahmed I, which was entirely covered with a nacre and tortoiseshell mosaic. Like Pierre Loti, Europe’s intelligentsia delighted in oriental interiors, for which the Liberty store supplied many articles and pieces of furniture ornately inlaid with mother-of-pearl created in Europe or imported from Asia, India and North Africa.

In France, burgaudine lacquers brought mother-of-pearl to its apex. Precious shells were shipped from New Caledonia, a French colony since 1853, to Marseille to supply the marquetry trade with the shimmering pink, blue and violet reflections that Empress Eugénie enjoyed so much.

Nacre buttons made in Méru shined brighter than ever. By the turn of the 20th century, Méru was the world’s mother-of-pearl capital and a place where master craftsmen were trained. One of them was Jules Vaillant, famous for his fan mounts signed with his engraved initials. Lastly, Oise native Georges Bastard ushered nacre into modernity. This sophisticated Art Nouveau and Art Deco virtuoso worked with the leading figures of his day, such as Léon Jallot and Jacques-Émile Ruhlmann. Crudely imitated by "Oriental essence", a mixture of fish scales brushed on or under the surfaces to be decorated, mother-of-pearl succumbed to the onslaught of plastic before cultured shells gave it a new lease on life. Now that its rank as a precious material has been restored, mother-of-pearl again features in jewelry and marquetry.