In Saint-Germain-des-Prés, Rebecca Sack and Aude Louis Carvès opened the only gallery specializing in paintings by Japanese artists of the Nouvelle École de Paris. They told us more about this promising new market. 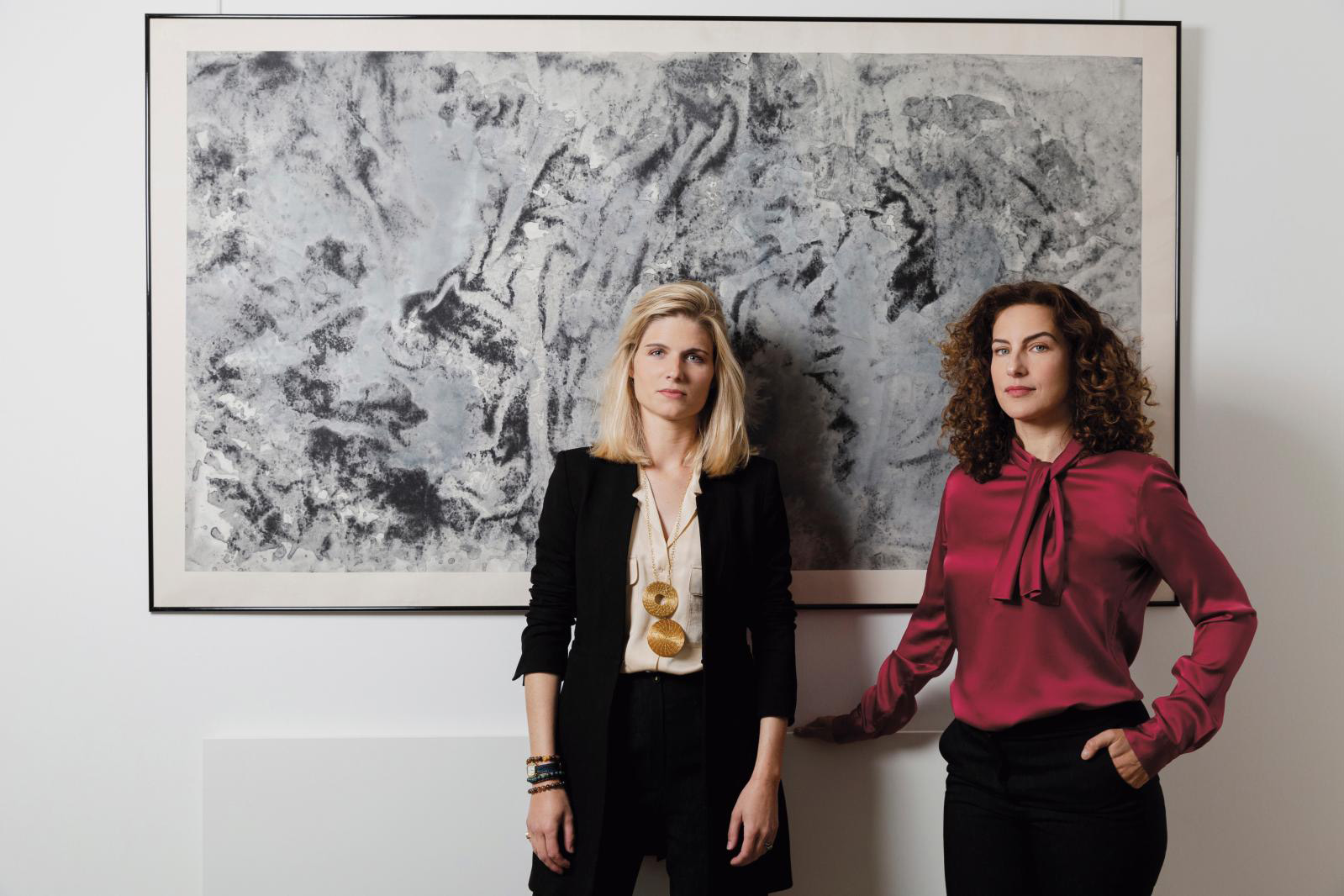 You opened your gallery in 2020, when your careers at Jacques Barrère and Bonhams, respectively, were thriving. What made you take the leap?
Aude Louis Carvès.
The idea of starting our own gallery had been on our minds for a while, but the lockdown is what finally pushed us to follow through. We share the same passion for Japanese artists of the Nouvelle École de Paris—Hisao Domoto, Toshimitsu Imai, Yasse Tabuchi and Key Sato—a niche sector where there’s a lot to discover. Both of us come from the world of Asian art: Rebecca spent five years in China before taking over as head of the Jacques Barrère Gallery in 2012. I started the Asian Arts department at Claude Aguttes before being in charge of the same section at Bonhams France.

Your gallery is in an apartment on the cour de Rohan, not far from where the late Rodolphe Stadler, who launched some of your artists, used to live. Did you have him in mind when you chose the location?
A. L. C.
Saint-Germain is the ideal place for this kind of gallery. Many historic dealers, like Stadler, flourished there. The cour de Rohan was already well known as a gathering place for intellectuals after the war. Balthus had his studio just above our gallery. Finding the apartment was a stroke of luck.
Rebecca Sack.
To us, the apartment idea seemed like the most appropriate model for today’s reality. Galleries are much less frequented today, at the time of fairs and the marketplace. We invite guests to almost bespoke hangings. They appreciate the exclusivity. Plus, we can devote the rest of our time to research and travel. Occasionally, we take a walk down the street. In June, we rent a gallery on rue de Seine to host an exhibition combining paintings and ceramics. We’re also thinking of teaming up with galleries specializing in other areas, a trend that caught on during Covid. For example, traditional non-Western artworks go very well with Key Sato’s work.

Did you attend the Stadler collection sales in 2013 and 2018?
A. L. C.
We closely followed the 2018 Thierry de Maigret sale, but the project had not yet come to fruition at that time. We visit Drouot every week, and last December we went to the Ader sale of the heirs of Michel Tapié, a central spirit for our research because he did an enormous amount of work with Japanese artists.

What role did these artists play in the 1950s Paris avant-garde?
R. S.
They all came to Paris at the same time: Tabuchi in 1951, Domoto, Imai, Sato and Sugai in 1952. They attended the free academies: Imai, Domoto and Sugai went to the Grande Chaumière and Sato to the cité Falguière. They managed to quickly fit in with the capital’s artistic landscape and won support from recognized critics like Michel Ragon, Michel Tapié and Pierre Restany. They frequented avant-garde abstract artists of the time: Atlan, Michaux, Riopelle, Sam Francis and Fautrier. They managed to scrape by, exchanging works for lodgings. Galleries were very active and looked after them. Stadler launched Imai and Domoto, Sato exhibited at Massol—surely the most important dealer at the time—Tabuchi at Ariel, Sugai at Craven. The Kléber Gallery showed works by Imai and Mathieu side by side. These artists were quite successful during their lifetimes. They can be found in many French, Italian and Japanese museums as well as at MoMA, which featured them in the 1966 show "New Japanese Painting and Sculpture".

What is the aesthetic connection between them?
R. S.
Chance and their relationship to nature are fundamental to them, but their technique is very controlled. That stems from their calligraphic training: for years, they tirelessly repeated the same gestures over and over again. The approach is different from Mathieu’s or Pollock’s, who worked automatically. Imai is flamboyant. His work reflects his exuberance. Domoto is extremely precise. Sato is a painter of interiority, fascinated by parietal art. Their aesthetic balances two forces: yo-ga—Western-style painting—and nihonga—Japanese classical painting. But what matters most to us is showing how these painters breathed new life into abstract art. You can find crossed influences with Soulages, Zao Wou-ki and the Americans of the Pacific School, Franz Kline and Mark Tobey, as the 1986 exhibition "Japon des avant-gardes" at the Centre Pompidou underscored very well.

So why is there such a price gap between Imai, the most popular of them, and his contemporary Zao Wou-ki?
A. L. C.
Japan underwent a major crisis in the 1990s. This has been seen in the object market, which I think is vastly undervalued. Our Japanese artists were supported by their country during their lifetime, but much less so afterward. Zao Wou-ki, on the other hand, benefited from the market boom in China. Chinese collectors want to buy up national painters, and they can afford it.
R. S.
A parallel can also be drawn with works by Vietnamese artists bought by the diaspora, hence their astronomical prices. Nevertheless, since 2015-2016 there’s been a growing interest in Japanese painters that takes advantage of the current craze for the 1950s. Imai, whose works are bought by the Chinese, and Domoto come up at auction on a regular basis. A 1970s Domoto painting recently fetched over €125,000 at auction. Very recently, prices for Sato’s works have soared.

How much should people expect to spend?
A. L. C.
It varies depending on the artist, but prices are very reasonable. While a large painting by Imai from the 1960s goes for €200,000, most of our works are accessible between €5,000 and 40,000. Prices for drawings range between €8,000 and 25,000. We have a lot of French and Italian —Italy, with Turin, was just as important for informal art as France. Domoto is more sought after in Hong Kong and the U.S., because he’s been there. And we have more and more Japanese buyers.

You describe your specialty as "a subject where there’s a lot of research to be done". What are your sources?
R. S.
Exhibition catalogs—the one for the 1989 Imai retrospective at the Osaka Museum, for example, is a goldmine of information—and dealers’ archives. Stadler’s archives are held at the Abattoirs in Toulouse, and soon the Kandinsky Library will open Michel Tapié’s archives. The Tapié specialist Juliette Evezard will help us. We’re currently preparing a reference book with her and Danièle Bloch that will sum up all the available knowledge. A major French institution is also very interested in the idea of staging an exhibition on the subject.

The Salon du Dessin on May 18 is next on your agenda. What will your stand look like?
A. L. C.
It's a fair we like a lot, with a human scale and a beautiful clientele. In Asia, paper is worth as much as canvas. We’ll present inks and gouaches, especially by Key Sato, at around €10,000. Sato was particularly fond of this medium, which he rubbed to give depth to his "landscapes", veritable geological dreamscapes.

You also offer contemporary ceramics from Asia. Is this a significant part of your business?
R. S.
It’s an area we’d like to develop. Ceramics is a major art form in Asia. We’ll focus on sculptures capable of dialoguing with our Japanese painters, which lets us open up our horizons without deviating from our aesthetic line. Right now we’re waiting for new works by South Korean artist Seungho Yang, who was tremendously successful at Asia Now. He’s a great master of tongkama ceramics, which we’ll present on rue de Seine in June.

2020
Creation of the Louis & Sack Gallery