Louboutin: a stitch in time

We visited the famous shoe designer in a theatrical apartment crammed with furniture and knick-knacks, where he told us about his passions and sponsorship of the Cinémathèque Française and the Palais de la Porte Dorée, in Paris. 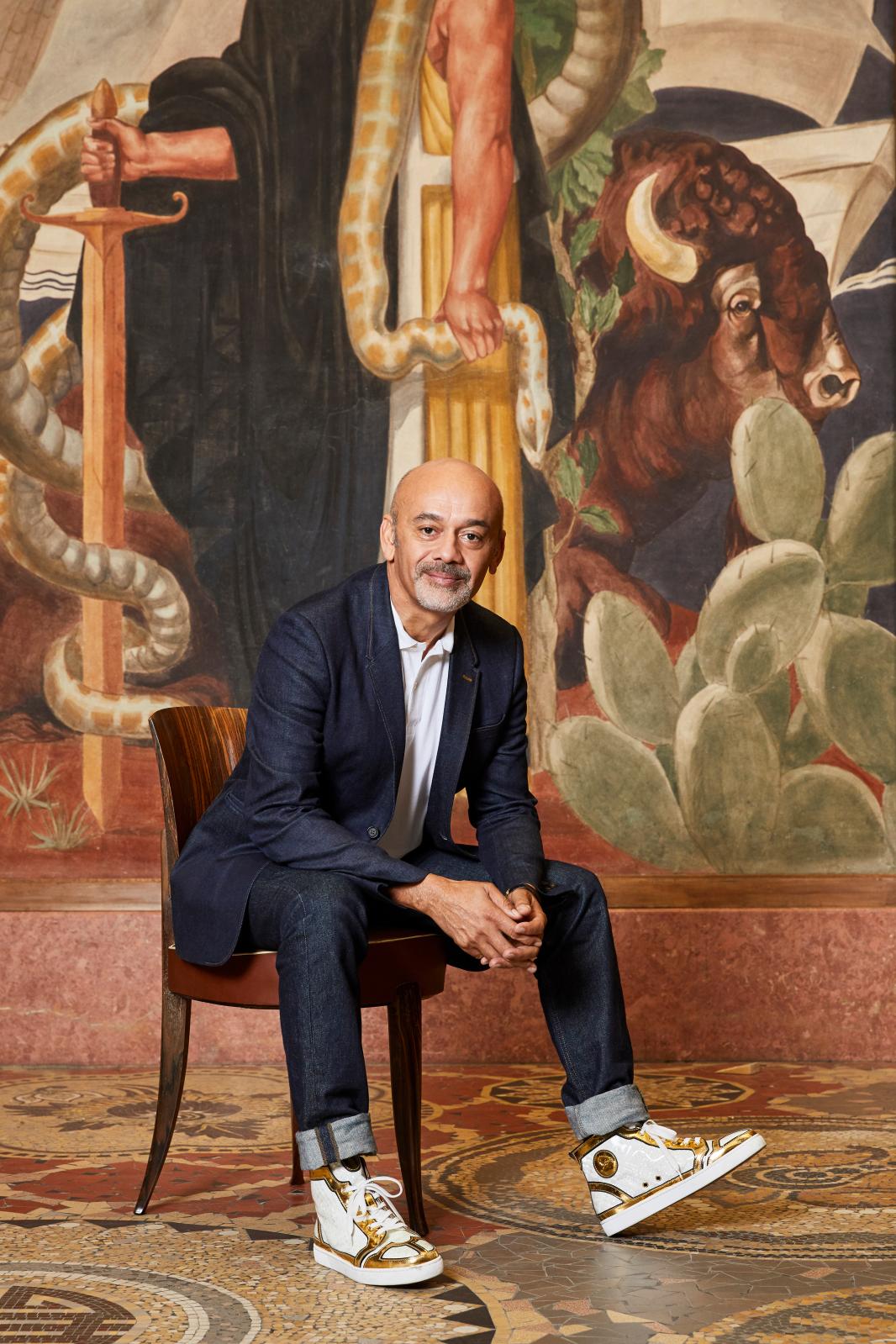 Where do you work on a daily basis?
My design studio is at 45 Rue Jean-Jacques-Rousseau in the 1st arrondissement of Paris, and the studio dedicated to bespoke shoes at 14. I don’t employ an army of employees for my collections. Assisted by Hugo, my right-hand man, I design all the shoes we sell worldwide.

What led you to become a sponsor of the Cinémathèque and fund the restoration of Youssef Chahine’s films?
I owe a lot to cinema. I grew up in Paris in the 1970s but wasn’t interested in French films back then. I was much more drawn to exotic worlds that offered me an escape from my everyday life. I saw my first Egyptian movies at the Athéna, a cinema in the 12th arrondissement. When a friend of mine took me to see a film by the Indian director Satyajit Ray at the Cinémathèque, which was at the Palais de Chaillot back then, I was dumbfounded. When I was 20, I moved into an apartment near Trocadéro, which made going to the Cinémathèque much easier. Over time, Youssef Chahine came naturally to me. But film is fragile and can irreversibly deteriorate if it’s not well-preserved. As a sponsor, I’m overjoyed to see that the Cinémathèque retrospective, followed by an exhibition, will give people a chance to discover or rediscover the great director’s legendary films. When I found out, fairly recently, that I have Egyptian blood running through my veins, I wasn’t surprised. I love Chahine’s films, and Rohmer’s too, because they deal with human relationships and are wholeheartedly dedicated to women. If anybody owes much to women, it’s me!

The Palais de la Porte Dorée in Paris is another place synonymous with exoticism for you.
As a child I would go to the Vincennes Zoo and the Musée des Arts d’Afrique et d’Océanie. I loved the tropical aquarium, but also enjoyed wandering around the art deco rooms populated by large, mysterious silhouettes bathed in soft light. They looked spooky and fascinating at the same time. Today, watching my two daughters has made me realise that children actually enjoy having the wits scared out of them. When I was little, the Palais de la Porte Dorée was just the right place for that. Despite being repurposed several times, I’m still very fond of the building, which many Parisians are unfamiliar with. By the way, I think that its latest incarnation as the national immigration history museum is perfectly in keeping with its history.

What did that world contribute to the designer you became?
Shoes, nothing less! When I was a teenager, I saw a sign at the Palais de la Porte Dorée dating from the 1950s telling people not to walk on the museum’s floors in heels in order to protect them. Back home, I started drawing them.

What does your sponsorship involve?
As a single private donor, we funded the lighting of Alfred Janniot’s stone tapestry gracing the facade. We also contributed to the refurbishment of the main lobby and the Lyautey and Reynaud rooms, which have furniture by Jacques-Émile Ruhlmann and Eugène Printz. Lastly, we participated in saving Albert Laprade’s library. For many years I’ve been trying to introduce this place to people, starting with my friends! For example, David Lynch shot a commercial in the forum several months after going there with me. Those unexpected volumes and that singular light never fail to fascinate anybody who sees them. Some of my friends have even said that the Palais de la Porte dorée is where the decorative arts museum should be! Personally, that’s where it dawned on me that everything around us is designed by the hand of man. That place embodies the history of human consciousness.

What objects do you love?
My father, a cabinetmaker, passed the bug on to me and I became a compulsive collector. I always seek out images that take me back to my childhood in one way or another. For example, I don’t go to galleries much but closely follow the work of Gilbert & George because I was taken to one of their shows at the age of 13! If a piece of furniture strikes my fancy, I’ll do anything to see it up close. When objects are well designed, they have no scale: they must be observed and touched.
THINGS TO SEE
"Youssef Chahine retrospective", La Cinémathèque Française, Paris.
From 14 November 2018 to 28 July 2019.
www.cinematheque.fr

Jean-François Dubos: the man who gave Paris Photo a chance