Les Oeuvres Choisies – An Exhibition Not to Be Missed

The latest collegial exhibition at the Hôtel Drouot tempts with its birds-eye view of some of the most captivating highlights of the coming auction season. 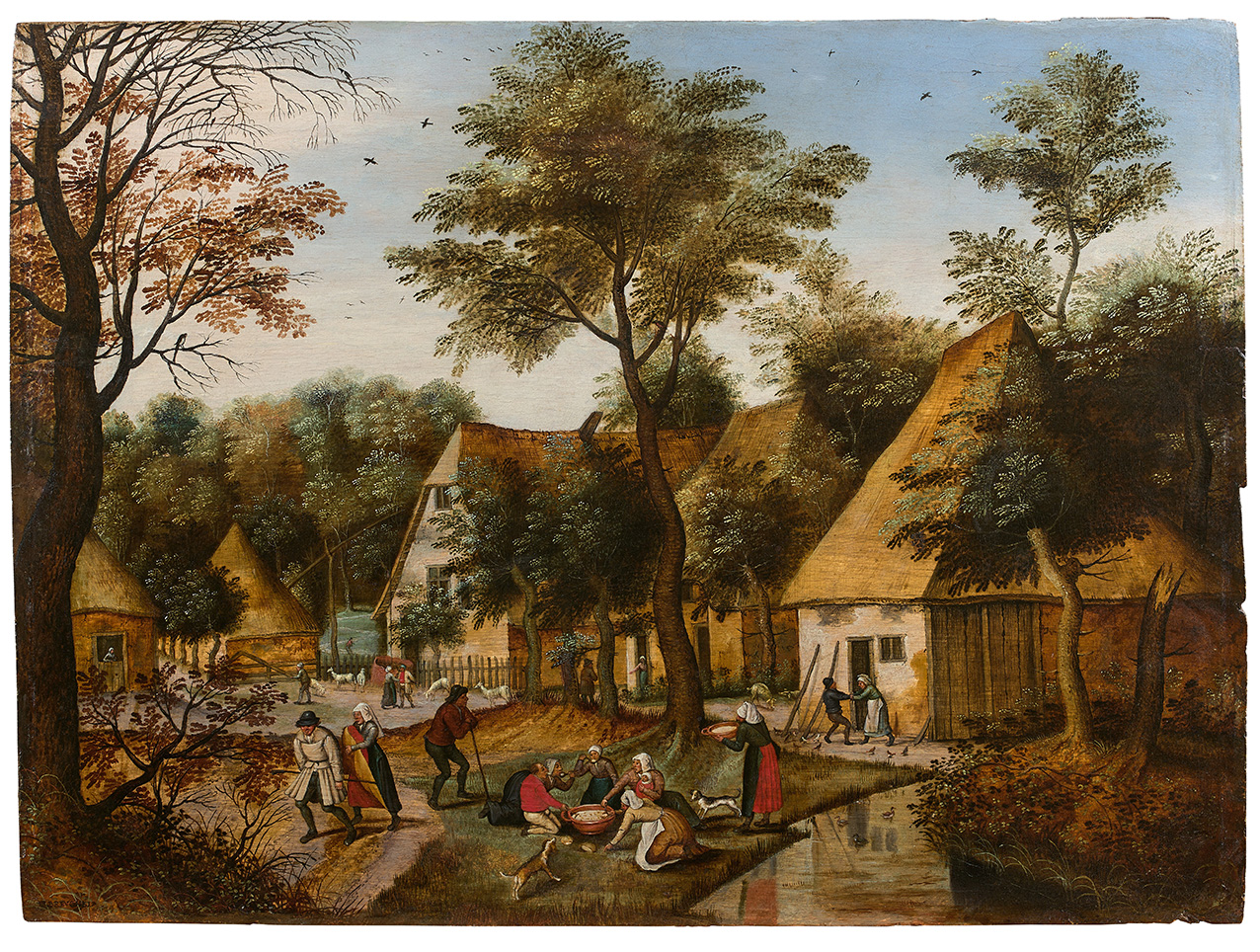 Each quarter, the unique character of the Hôtel Drouot is foregrounded by a collegial exhibition of some of the most exciting works of art to come up for sale. The exhibition is a collective effort of the specialized ‘commisaires-priseurs’ that propel the historic institution. The Hôtel Drouot is defined by a balance between the independence and collaboration of its associated experts, a balance well evident in the current exhibition "Oeuvres Choisies", on view through Monday 21 September.

Oeuvres Choisies or "Selected Works" offers a birds-eye view of those specialists who are the beating heart of Drouot. Keeping up with each quarterly exhibition offers a useful means of familiarizing oneself with those gallerists and auctioneers as well as the range of sales over which they preside.
Lacking any declared focus, a collaborative exhibition mirrors the heteroclite nature of the pre-sale shows organized each day at the Hôtel. This fall European painting takes pride of place in "Oeuvres Choisies". A luminous village scene by Pieter Bruegel the Younger (1564-1638) demonstrates the continued popularity of his father’s rural subjects as well as his own loving treatment of foliage. A pair of retable panels by Giovanni Capassini (1510-1579), who finished his days in the French Midi, features an Annunciation scene with verso images of Saint Gudule as well as the Archangel Michael slaying a classicized Lucifer. Capassini’s prismatic colors build on the Mannerism of his master Andrea del Sarto while the confident modeling of the figures remains firmly rooted in the Florentine tradition. Nicolas de Largillière’s Portrait of Marie-Thérèse Jacquet de la Bussières embodies all the psychological animation of the Rococo. Her gleaming eyes tease the parrot and hound that strain towards her extended hand, an exchange that seems to course through the rustling folds of her gown. In addition to an energetic study by Jacob Jordaens (1593-1678), early modern offerings are rounded out by a late Sacra Conversazione by Giuseppe Vermiglio (1585 -1635), which unites the chiaroscuro of Caravaggio with Bolognese monumentality, in a condensation of the innovatory ferment of the early Italian Baroque.

If one were to judge purely by estimated price, the star of this season would be the porcelain and enamel lantern vase created for Emperor Qianlong (1736-1795). Prized by the Emperor for its delicate palette and active narrative composition, the vase’s vegetal symbols of longevity presage its intimate link to three centuries of modern Chinese history. A cherished imperial relic, it is thought to have been offered as a birthday gift to the Dowager Empress Cixi (1835-1908) whose reign ‘from behind the curtain’ simultaneously ushered the Qing dynasty into the twentieth century and marked its ultimate downfall. A splendid pair of peach-shaped boxes of the same period  – a tour de force of intricately carved polychrome lacquer work – position this season as particularly exciting for its offering of Qianlong art.
Modern European painting is no less well represented. Forest Kiss of circa 1869 by Viennese painter Emil Jakob Schindler (1842 - 1892) embodies the continent-wide rediscovery of Dutch landscape. Another nineteenth-century rediscovery, the 'neo-grec' quest for realistic representations of ancient daily life, is represented by a curious early work of Jean-Léon Gérome. Troop of Buffalos, Countryside of Paestum (1851) is one of several surviving oil sketches for a series of now lost views of Paestum that counted among the painter’s early triumphs. An emphatically graphic rendering of the Temple of Hera contrasts with a troop of meticulously painted buffalos. A souvenir of his travels in Italy with his master Paul Delaroche, the canvas speaks to the powerful spell that the Greek ruins cast over a young painter still mastering such closely observed effects as the translucence of a stream, or clouds dissipating in the heat of a southern Italian sky.

Moving further into the nineteenth century, the exhibition features an Edgar Degas (1834-1917) charcoal sketch gridded to serve as the basis for the Metropolitan Museum’s "A Woman Ironing" (1873), which faithfully replicates the chiaroscuro effect explored in the drawing. An 1899 autograph manuscript of Paul Gauguin’s anticipated self-defense before the Procureur Général of Papeete offers a haunting glimpse into the painter’s merging of personal myth and everyday life. Finally, an unusual broad and plunging vista in distemper by Edouard Vuillard (1868-1940) suggests the generalized japonisme of his generation as well as his experience as a theatrical set painter. View of Pavilions Towards the Sea (1910) firmly anchors the viewer at the windowsill with an unpainted area of carboard support distinguished from the view outdoors by a rough charcoal line. The immediacy of touch is thrilling with a building up of pattern that more recalls the grouped brushstrokes and polychrome modeling of Cézanne than Vuillard’s own dappled interiors.

Two major early French photographers are represented in the exhibition. Gustave Le Gray (1820-1844), who invented a variety of processing and printing techniques to consciously lift landscape photography to the status of an artform, appears in a self-portrait for which his student Auguste Mestral assisted. The salt print developed from a paper negative shows an informal moment during the ‘heliographic’ survey of French monuments commissioned by the French state in 1851. The project was driven by a renewed interest in Gothic architecture and Le Gray is suitably posed reclining beneath the cloister arches of Sainte-Marie d’Arles-sur-Tech. An album of 28 salt prints by Edouard Baldus (1813-1889), who contributed to the same survey, demonstrates his evolving approach to architectural photography. The large prints exploit darkroom technique and innovative points of view to best isolate and document Parisian monuments in the 1850s as the process of Haussmannization reorganized the city center.
Twentieth-century offerings feature an instantly recognizable example of Max Ernst’s Forest series (1927), which showcases the surrealist master’s exploration of paint and texture. Based on the aleatory patterns of pencil rubbings across his studio floorboards, the canvas creates an ominous nocturnal effect due to its dark palette and liberal grattage. Lauded as a precursor of surrealism by André Breton, a rare leaf from the bestiary of Aloys Zotl (1803-1887) dated 1851 features a writhing, overscaled tentacled beast set in an imaginary tropical landscape. Marie Laurencin’s (1883-1956) twin portraits from 1946 of the writer, influential editor, and resistance fighter Jean Paulhan and his wife Germaine, offer a poignant testament to the reemergence of the Parisian visual and literary avant-gardes in the immediate wake of World War II.

Germaine Richier’s (1902-1959) nearly life-size sculpture The Foolish Virgin (1946) similarly evokes the return to Paris from wartime exile. Marking a shift in the artist’s exploration of the human figure, inevitably compared to her contemporary Giacometti, the bronze joins her enduring commitment to classical proportion and increasingly direct manipulation of clay before the live model. The Nouveaux Réalistes are represented by Arman’s (1928-2005) imposing ‘combustion’ Roméo et Juliette (1970 or 1974) and Les pieds au mur dits la Poule-Paon (1956) an early figurative bronze by César (1921 – 1998).

A visit to the Drouot would be incomplete without relishing the heterogenous objets d’art and curiosities featured there each day. "Oeuvres Choisies" does not disappoint on this front. Two late sixteenth-century plates by Jean Limousin centered on equestrian portraits of Emperors Vitellus and Vespasian are undeniable masterpieces of enamel work. Hailing from the collection of the passionate gardener and owner of the Chateau de Brécy the late Babara Wirth, a cardboard maquette of the Chapelle Royale at Versailles with a glittering roof of mica shingles, transforms its original vitrine and ornamental trimmings into an entire world animated by miniature carriages and engraved, hand-colored figures in court costume. An extremely rare first edition of La Fontaine’s Fables (1668) bears numerous hand corrections to the printed text and 118 engraved vignettes. Finally, an exceptional masterpiece strongbox presented by an apprentice circa 1730 for admission to the Strasbourg guild points to the blurring of art and industry within earlier historical periods. Forged in iron with a repoussé and chiseled cladding, the twenty-two bolts of the safe’s mechanism occupy the entire lid and are opened with the original key. Drawings of the lock, which would have been presented to the corporation to verify the artisan’s work, are preserved in Musée des Tournelles at Rouen.