Léonard Gianadda, Creator of the Foundation in Martigny

In French-speaking Switzerland, Martigny, where Julius Caesar covered himself in glory, there lives another conqueror: Léonard Gianadda, who set up a foundation that hosts memorable exhibitions. the next one is “Caillebotte”, the tale of a remarkable adventure. 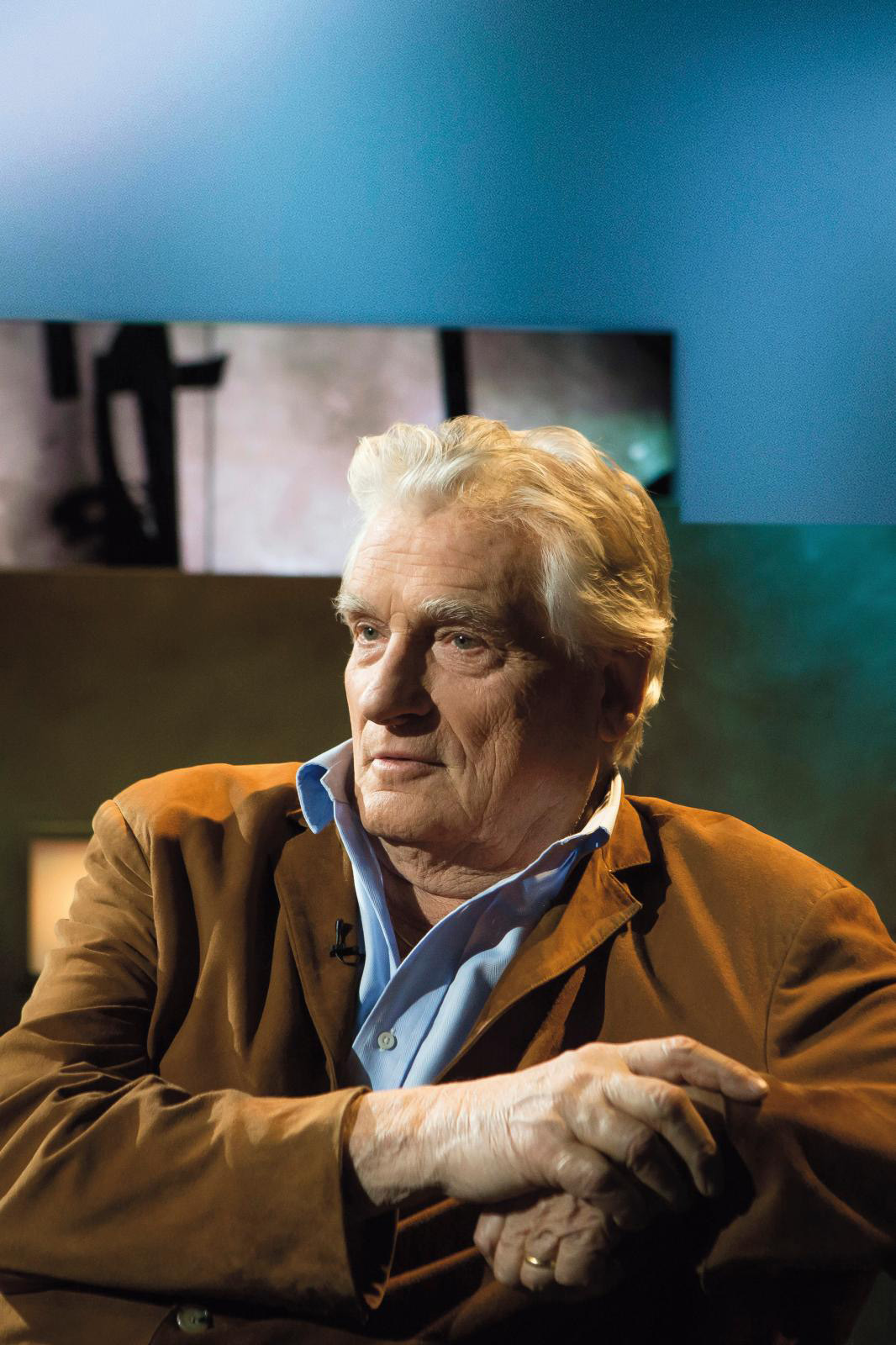 Léonard Gianadda can move mountains. Forty years ago, who would have thought that the foundation he created in the depths of the Swiss canton of Valais would host masterpieces from the Metropolitan Museum of Art in New York and the Pushkin Museum in Moscow? “I’m glad,” he says. He has a right to be. two generations after his penniless grandfather immigrated from Piedmont, Italy to Martigny, Gianadda, who trained as an engineer, grew wealthy erecting bridges and buildings in the same city. While building a tower in 1976, the remains of a gallo-roman temple were unearthed. Once called Octodure, Martigny is an ancient city: Caesar fought a battle there 2,000 years ago. While waiting for the building permit, Pierre, Gianadda’s younger brother, died in a plane crash. They were so close that Léonard accompanied him on his honeymoon. Heartbroken but later touched by grace, Gianadda decided to create a cultural foundation in his memory.

He drew up the plans himself and provided all the funding. An imposing reinforced concrete building rose up. Jealous people called it a “bunker”, saying Gianadda had delusions of grandeur. “Of course you’ve got to be a bit crazy,” he says. “That’s my passionate Italian side. A Swiss person never would have done that. The Swiss pile stuff up, hoard and take everything with them to the grave.” The Pierre Gianadda foundation was inaugurated on August 19, 1978, the day Pierre would have turned 40. It houses a museum of archeology—and vintage automobiles. Why cars? The real estate project had a parking facility that needed to be filled so a collection was speedily put together: 40 models trace the history of the automobile from the 19th century to 1939. What’s more, the foundation hosts concerts and exhibitions. Shows of works by regional artists and, to bring in the crowds, retrospectives of old and modern art take place three or four times a year.

Gaining Credibility
“The first exhibition, "Five Centuries of Painting" was a flop,” says Gianadda. “A local critic, André Kuenzi, tore it apart.” Gianadda wanted to punch him in the face. Once he calmed down, he contacted Kuenzi, who, finally convinced, organized a Paul Klee exhibition. “Every monographic show is a feat,” he says. “Two hundred paintings mean 200 negotiations and 200 fights.” But Gianadda does not belong to the art world. “When I’d ask somebody for a loan by phone or mail, I was always turned down. If I’d go there and explain my project, they’d look upon me kindly.” Perhaps that is because of his striking appearance: 1.92 m tall (6.3 ft), broad-shouldered, an open shirt revealing his First Communion medal, a suede sport jacket, a leather bag dangling from his wrist and a Swiss drawl. “At least he’s genuine,” says Jean-Louis Prat, former head of the Maeght foundation in Saint-Paul-de-Vence. “Leonard is frank, direct and warm. How can anybody resist him? He’s a seducer.”

Women are receptive to his latin charm. Lucile Manguin, the painter’s daughter, was “an unconditional fan from day one.” Thanks to her address book, the foundation was able to host “Manguin Among the Fauves”. Press relations director Georgie Viennet also gave him support. “What you’re doing is terrific! People should know about it!” she said. Viennet gets the art critics who matter to come. The TGV high-speed train did not exist; the trip from Paris to Martigny was a real adventure. But on arrival, they would meet with a royal reception! A vintage automobile would be waiting for the distinguished guests. The foundation became well known outside Switzerland, which is normal since Gianadda spent a fortune on spreading its fame far and wide. Baron de Rothschild offered to loan Majas on a balcony for the 1982 “Goya in Swiss Collections” show, but the insurance premium was colossal. Gianadda remembers the figure: 40 million francs, a fortune at the time. But how could such an offer be turned down? Money is no object to him.

In 1990, the foundation hosted “Chagall in Russia”. Moscow’s Tretiakov Gallery would loan the spectacular Décor of the Jewish theater—in exchange for a $400,000 restoration. “All the great institutions had balked,” Gianadda said. He did not hesitate long. The painting left the USSR for the first time. It was a success. Ida Chagall was so grateful that she gave Gianadda one of her father’s works. For four decades, he has led a double life: real-estate developer and head of a cultural institution. He walks around with a Dictaphone to remember everything. “The man is always on a high-speed chase. He’s like quicksilver,” says heritage curator Daniel Marchesseau, who remembers the first time they met. “I was going to Martigny to see the Giacometti show,” he recalls. “Léonard picked me up at the Lausanne train station. In 40 minutes—the time it took to reach the foundation—he talked me into holding a Modigliani retrospective. There was such a passion in the way he spoke!” Thirty-five years later, they are still working together. The Swiss are faithful friends.

After Monet, Cézanne, Valadon, Fautrier and Cartier-Bresson, Marchesseau is organizing a Caillebotte retrospective this summer. Gianadda surrounds himself with skilled specialists and a solid network. Prat is one of his allies. In addition to Braque, Bonnard and Miró, Gianadda held two Nicolas de Staël exhibitions 15 years apart. "He’s attentive and willing to pitch in to help a project,” Prat says. The boss sees to everything. He is authoritarian, intransigent and impatient, detests amateurism and throws tantrums that shake the bunker. But his faults are forgiven: he is a rare, generous man who enjoys sharing. "I was in Florence on my honeymoon,” recalls long-time press officer Véronique Jeanneau. “At noon, Léonard called me: 'I’ve booked you a table at such and such a restaurant' (the best in town). 'You’ll order this and that and it’s on me.” Then the man in a hurry hung up.

From Collections to Passions
Unsurprisingly, Gianadda is also a collector. He always buys one or two works by whatever artist he is exhibiting, from Toulouse-Lautrec to Morisot, Vuillard and Picasso. “One less lender to convince!” he says. He dreams of setting up a permanent exhibition. “Ten paintings do not make a collection,” he says, “but 10 sculptures are an attraction”—especially if they are monumental, which is how he likes them. Gianadda bought land adjacent to his foundation to create a sculpture park. He shaped the landscape, added beautiful water features and valleys, chose each tree’s location and planted them and gradually installed sculptures not by 10 but 50 artists, including Rodin, Bourdelle, Brancusi, Moore, Calder, César, Dubuffet and Chillida—a survey of 20th-century modernity. The cost was astronomical.

It is his creation and his pride. “One of Europe’s most beautiful sculpture parks,” he declares. “I’m not the one who said it, La Gazette Drouot did.” His personal assistant immediately produced the article in question. Soon, people were coming by the busload, along with the chic clientele of Gstaad and Verbier. Gianadda appeared in television commercials to boast about his events. The Van Gogh show broke the record: nearly 500,000 visitors—in a town of just 17,000 people. Martigny took a long time to celebrate the patron of the arts, and local civil servants’ pettiness and blunders still hurt him, but France paid him tribute. In 2003, he was inducted into the Paris Academy of Fine Arts. Posing with Annette, his wife, who looked so tiny beside him, the giant in the green jacket was a moving sight. His hair may be white, but his enthusiasm remains undimmed. His heart still started beating faster as he watched employees unpack Impression, Sunrise, loaned by the Marmottan Museum for the recent “Hodler, Monet, Munch” show. Who knows what moved him more: the painting’s beauty or the feat of having obtained it.

Delighting Music Lovers
Gianadda is equally devoted to music. As a child, he sang in his school’s choir. “At the first concert, there were more musicians on stage than people in the audience,” he says. Later, the savvy businessman teamed up with the Montreux-Vevey Festival. The world’s leading artists, from Yehudi Menuhin to Barbara Hendricks, Ruggero Raimondi and Isaac Stern, heeded his call. The recitals took place among the Gallo-Roman ruins, which, fortunately, have excellent acoustics. The works on the walls add to the music lovers’ delight. “It’s an honor to sing amidst paintings by Picasso, Matisse, Modigliani and so many others—what an inspiration!” says Cecilia Bartoli. The Italian mezzo-soprano has performed at the foundation over 30 times. Gianadda gleefully recounts the start of their long friendship: "My wife had seen and heard Cecilia Bartoli on television so I booked tickets for the Zurich Opera House where she was performing in Rossini's La Cenerentola. After the show, we went to dinner at Conti's. Cecilia was having dinner at the next table. I didn’t dare utter a word to her. Believe it or not, I’m shy. The following year, she was in Zurich again. And again, we saw her in the same restaurant. This time, I went for it! ‘See my agent’ she answered somewhat haughtily. I gave him no peace!” Perseverance is a key to his success. Last July, Bartoli gave a recital to inaugurate Martigny’s stepped amphitheater, freshly restored thanks to Gianadda—another gift to his birthplace. He has also set up the Annette and Léonard Gianadda Foundation, whose purpose is a social one. Does Gianadda want to leave his mark on history? Of course. At 85, he quotes a chinese proverb: “The last shirt doesn’t have a pocket.” I had forgotten that he has a sense of humor.