Discovered nearly three thousand years ago, “Chinese varnish” developed throughout South-East Asia. Today, the unique properties of this material are as fascinating as ever to master lacquerers and artists. 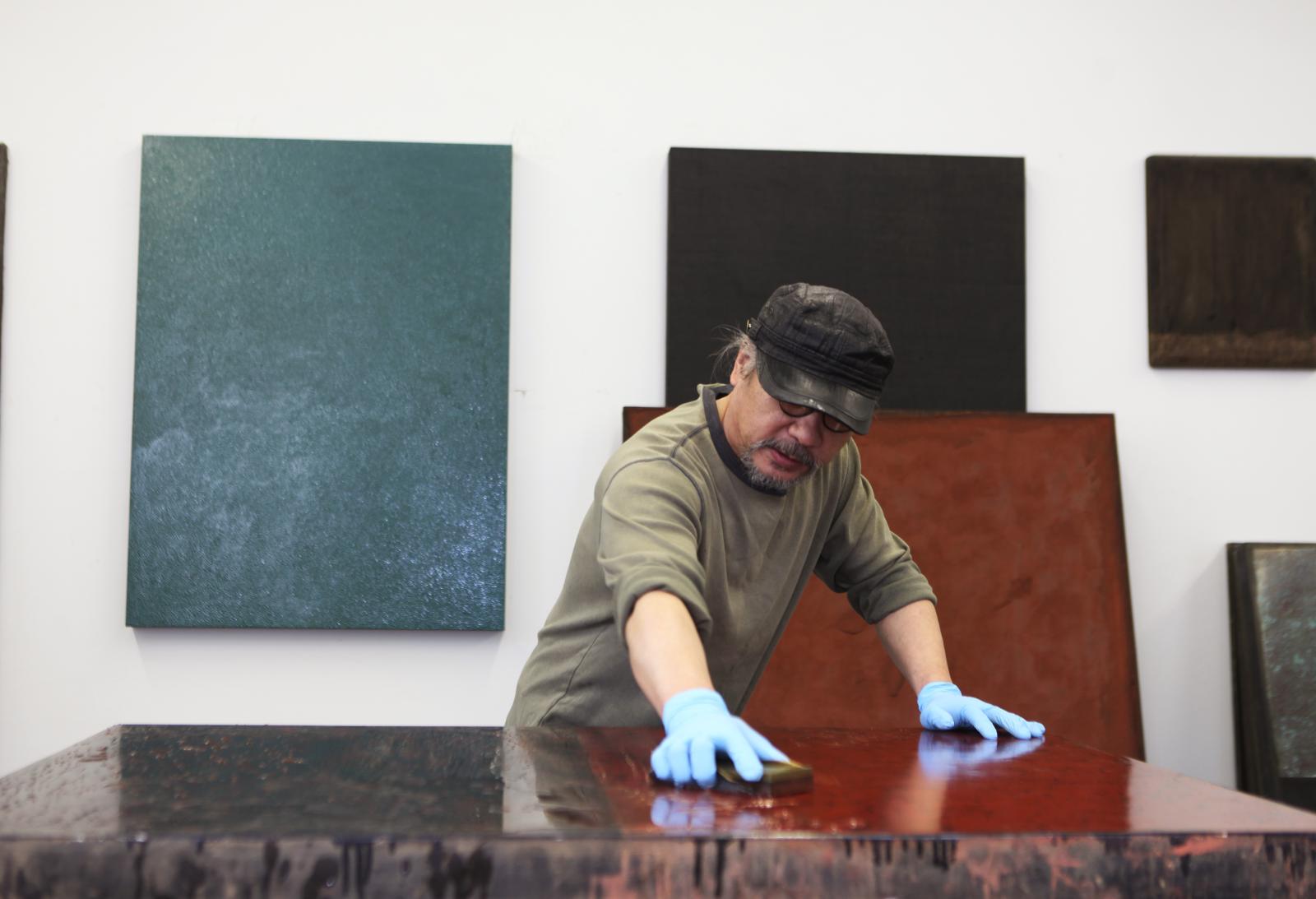 Weng Jijun in his Shanghai studio.

Weng Jijun in his Shanghai studio.

An insoluble, rot-proof, uncommonly strong resin that adheres to numerous materials (like wood, metal, leaves and leather), lacquer was initially used as a simple finish to protect weapons, objects and furniture. But its many qualities were soon explored in a more aesthetic vein, and increasingly complex techniques developed over the centuries. In the Ming period (1368-1644), over a hundred were listed, ranging from dry to painted, carved and inlaid lacquer. Largely used in the decoration of furniture and precious objects from the Song dynasty (960-1279) to the Qing period (1644-1912), it reflected codified aesthetic and traditional forms through to the 1980s. But in the last twenty years of the 20th century, with the opening of China to the world and the development of contemporary art, lacquer evolved into a practice with far freer expression. “A big tree needs strong roots to support it,” and according to Weng Jijun, artist, former teacher and director of the arts and crafts department at the Shanghai Academy of Art and Design, the mastery of traditional techniques underpins all expression, no matter how contemporary.

From figuration to abstraction
Time is one of the essential aspects in mastering the precious resin and the technical process. While, it has been possible to produce industrial lacquers quickly since the 20th century, and they are now more common, they are no match for the plant-based kind. Even though industrial lacquers take less time to collect and to dry, they aren't as strong and are less reliable in the long run. What with harvesting the raw sap from trees (with varieties and properties that differ with every region); preparing the powdered clay and cloth support; mixing the different lacquers with natural pigments to tint them; alternating coats of the substance and hardening times (in a room heated to a high temperature with over 80% humidity) and waiting patiently between the various stages – all before actually beginning to work on a piece – we are clearly looking at an incompressible process! Like the materials, the tools are simple and often natural: bamboo spikes, wooden pipettes, metal chisels and so on. So producing a lacquer piece takes several months, and the result is never 100% certain.

By choosing a single technique among the many existing, Weng Jijun has succeeded in fine-tuning and adapting it to a more abstract aesthetic approach than the vision dictated by strictly figurative tradition. For example, he uses the so-called “rhinoceros skin” technique (tixi in Chinese), which requires the application of at least ten coats of lacquer in succession, then making play with the different coloured strata by polishing them to various degrees to obtain a smooth surface. A process the master developed in two directions: by transposing it onto a flat surface – hitherto lacquers were only used with objects – and by “loosening” the polishing points to create a new motif and produce bumps while keeping a smooth rendering. In the 1990s and 2000s, the artist radically changed the way lacquer was perceived: “I chose this technique because it also reflected the Chinese philosophy of accumulating in order to remove. I adapted it to my times and cultural context.” Since then, he has constantly explored this contrast “between the complexity of the process and the minimalism of its aesthetic”.

Subverted traditional techniques
Wensen Qi, alias Vincent Cazeneuve, also finds this art highly appealing: "It's an appropriation. I come from a milieu of antique dealers, and I like the interaction of things with time. I'm looking for balance, imbalance, tension and strong contrasts between materials. The highly artisanal feeling is also important. I don't proclaim an ecological aspect or a return to roots. As soon as I came into contact with Chinese lacquer, it literally sucked me in; I've never been back to France!" For the artist, a former cabinetmaker and lacquer restorer, it was obvious to go to the actual site to obtain the reins more easily, and above all to place himself at the heart of his story… Wensen Qi is always exploring the possibilities of the material. He uses it like paint, combining it with other media on ready-made supports in wood – not cloth, as tradition would have it. "I'm currently exploring the carving techniques used during the Song dynasty to make pictures," he says. The artist also works lacquer with old rice bags; he studies other materials around resin, particularly bamboo and textiles, which he weaves himself. “I have learned an enormous amount of new techniques. I create hybrids, even though some are a thousand years old.… My aesthetic vision is clearly contemporary, and I'm aware that I am contributing a ‘Western’ influence to my work,” he says. Lacquer is struggling to break away from its traditional image, and the actual technique remains underestimated by the contemporary art market.

Print the article
News feed
See all news
Planning for new museum dedicated to Le Corbusier begins
Virginia Museum of Fine Arts receives gift of over 8,000 Aaron Siskind photographs
Banker sentenced to jailtime for trying to smuggle a Picasso out of Spain
Domaine Royal de Marly museum, the Sun King’s hideaway, reopens
Not to be missed
Analyses
Prud’hon: the gift of Les Amis du Louvre
The Société des Amis du Louvre ends the year on a high note with…
Analyses
The discreet charm of the Maharajah
After the sale of part of Yeshwant Rao Holkar II's furniture in…
Analyses
Multiplying Mona Lisas
Mona Lisa's fame can be gauged not just by the hordes of tourists…
Analyses
MoCo: a new art ecosystem in the South of France
In Montpellier, a new entity aims to reshuffle the cards of contemporary…