A treasure trove of Armenian knowledge, the Matenadaran houses one of the world’s richest old manuscript collections. Karen Matevosyan, the museum-institute’s deputy director for academic affairs, looks after them. 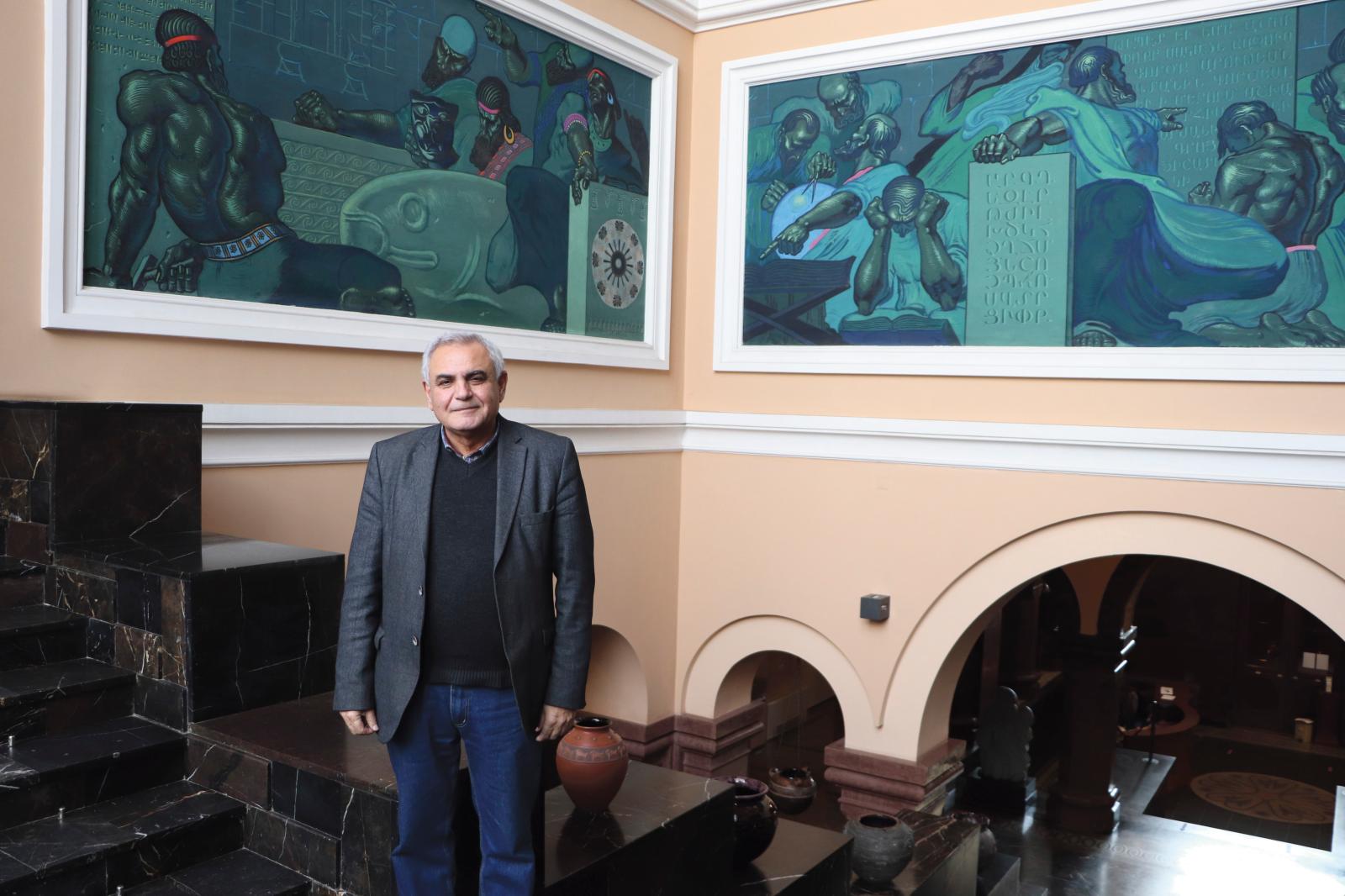 “A book is someone,” Victor Hugo wrote in Philosophical Prose. The Matenadaran-Mesrop Mashtots Institute of Ancient Manuscripts in Armenia has over 20,000 works. Some were saved from the flames, others brought in lieu of bread by illiterate peasants fleeing the persecution of foreign invaders, like the 13th-century Homilies of Mush, a 28-kilo (62 lbs.) book of 601 parchment pages, which the institute has on display to the public.

Majestically standing atop a high hill in Yerevan, the venerable beacon of national knowledge is an ode to the soul of the Armenian people, hungry for learning. Preserving their knowledge, whatever the cost, is a matter of the survival of identity in a place where the world’s first Christian state was created in 301. Since then, incessantly invaded and inexorably amputated of its ancestral lands, Armenia has relied on its only faithful ally: its unique alphabet, whose 36 letters—now 39—the monk Mesrop Mashtots created in 405. They turned out to be the national heritage’s life insurance. The first books—illuminated translations of the Bible and Gospels—were used to teach Armenians how to read and write their native language.

The Matenadaran, whose name means "library", became a research institute in 1959. It has been carrying out colossal research work since then, earning its inclusion on UNESCO’s "Memory of the World" register in 1997. Professor Karen Matevosyan, deputy director for academic affairs, talked to us about the study and conservation of these precious treasures.

Since 1959, your institute has published over 200 volumes of academic works on the Matenadaran manuscripts. What is your current focus?
Our biggest challenge is the detailed cataloging of every piece in our vast collection. To date, 10 volumes of inventory spanning the fifth to 12th century have been published, and 20 more will be in the coming decades. Our 120 researchers are working on the project, each in a very narrow field: linguistics, history, music, art, restoration, etc. We even have a medical doctor, Armen Sahakyan, who pieces together the manuscripts’ medicinal recipes. Cataloging is really the same as detective work.

Could you give a specific example?
It depends on the type of work. Three thousand of our manuscripts are in Greek, Latin, Hebrew, Syriac, Arabic or Persian. The remaining 17,000 are in Grabar (Old Armenian). That’s why having a linguist who can decode each of these unique objects is indispensable. Then the theme—religious, artistic, scientific, medical, literary or musical—guides the other experts’ choices. They must be specialists in the field the work is about because every detail, even the tiniest, is fundamentally important in interpreting a manuscript and authenticating its author, period, the place it was made and for whom, etc.

Yet, Armenian scribes usually recorded all that information in the “Memorial” chapter at the end of the book, didn’t they?
They did, but not all our manuscripts are intact, hence the importance of painstaking analysis, considering that from the fifth century on most Armenian monasteries were also scientific and artistic research centers. Their main purpose was to translate or write texts and copy religious scientific, literary or musical manuscripts. Many of these precious works were destroyed, looted or lost because of Armenia’s tumultuous history. However, among our surviving treasures, we’re lucky to have the Armenian translations of Eusebius of Caesarea’s Chronicle and Zeno of Citium’s On Nature, the original texts of which are gone forever.

As a historian, a medievalist and the author of 20 books on Armenian illuminated manuscripts, how do you account for their great stylistic variety in this period?
The answer lies in Armenia’s geopolitical development at the time, which contributed to the 13th-century revival of Armenian illumination, whose origins date back to the fifth century. During this golden age, many highly talented artists blossomed not only in Armenia—Toros Roslin being one of the most famous—but also in the Armenian kingdom of Cilicia, where Sargis Pitsak was one of the early 14th-century leaders. Grigor Tsaxkox was working in Artsakh, the Armenian name for Nagorno-Karabakh, and Margary in Ani, Armenia’s 10th-century capital, known as the “the city of a thousand and one churches”. Between the 14th and 16th centuries, the Vaspourakan School stood out for its very special style of miniatures, despite being plainer than the Cilician School, which had extremely elaborate and lavish gilded designs. The explanation is very simple: the Principality of Vaspourakan was much less wealthy than the Kingdom of Cilicia and the people who commissioned these works weren’t rich nobles but members of the lower classes.

Why do the Armenian miniatures from Cilicia seem more universal?
Probably because they successfully combine Byzantine and Islamic art. Cilicia had both Latin and Muslim neighbors, including Syria. This proximity influenced the art of Armenian scribes, as can be seen in the ornamental decorations on these manuscripts’ pages.

Just 1% of your collection is on public display in the Matenadaran’s galleries. Can researchers from outside the institution consult the manuscripts?
Any researcher may submit a request a month in advance specifying the purpose of his or her research. Because our pieces are so fragile, we often only make digitized versions of manuscripts available to them, which they consult on-site. For temporary thematic expositions that require protecting works liable to deteriorate on contact with light, our team of artists make exact copies to satisfy visitors’ interest. Our institution is over 80% government-funded. We can’t afford to buy old manuscripts at auctions or from collectors. Thankfully, collectors have donated around a thousand very rare pieces, which have been the focus of study and publication, usually in Armenian. Although interest in and demand for Armenian manuscripts is high because of their scarcity and quality, for the moment, the large-scale publishing of our works in foreign languages is not one of Armenia’s budget priorities.