Jean Touret and the Resurrection of Les Artisans de Marolles

The sculptor fell into oblivion after the success of Les Artisans de Marolles in the 1950s-1960s. This spring, a book and two exhibitions in Paris will bring him back to life—and provide an opportunity to see how his prices have trended. 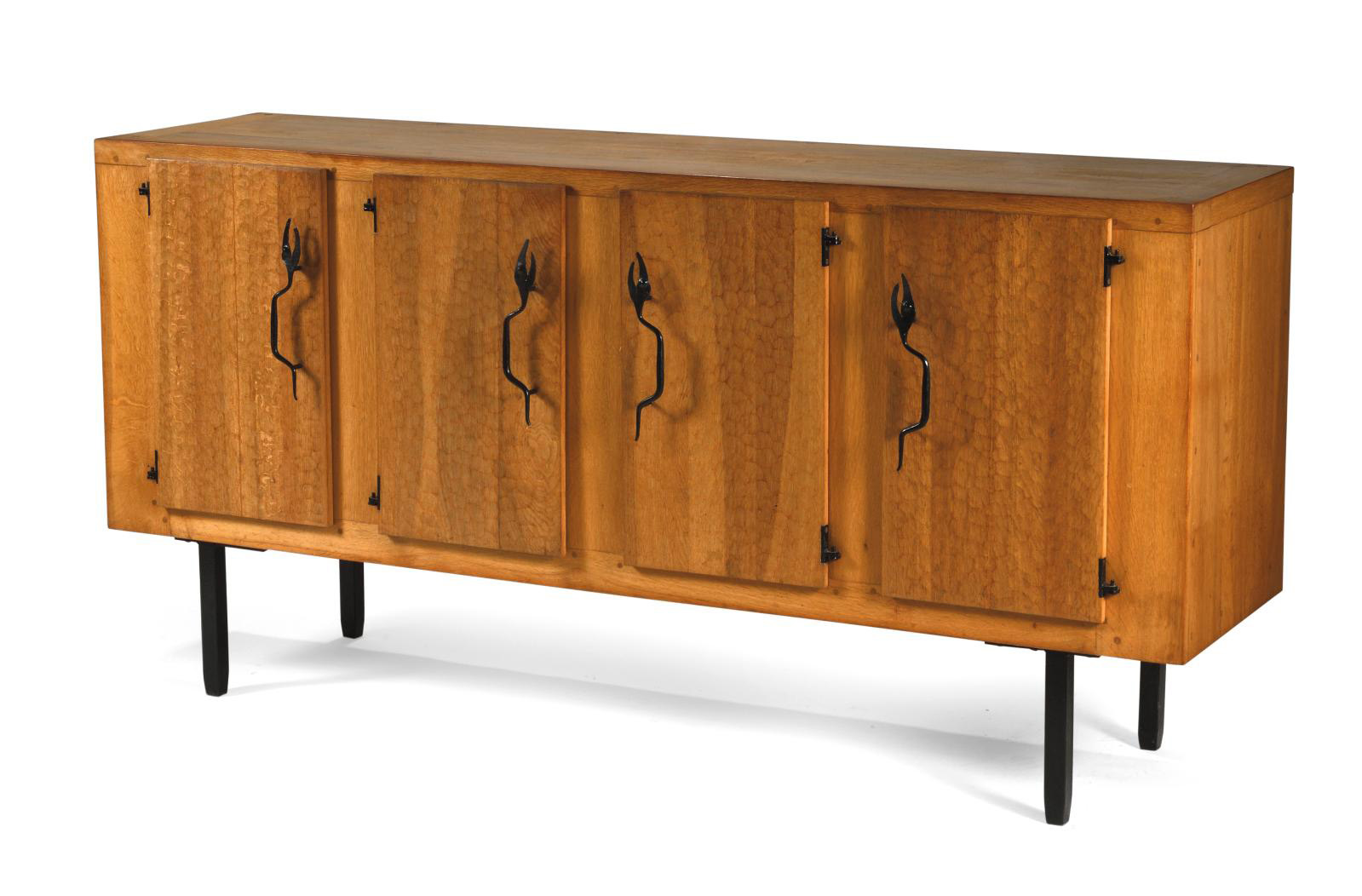 No man is a prophet in his own country. Jean Touret was resoundingly successful in the immediate postwar decades but, caring little about fame, fell into relative oblivion, along with his singular furniture—until recently. After seven years of work and research, two Parisian galleries will host exhibitions this spring, while the éditions de l'Amateur is about to publish a monograph on his career, a major first. “He had fallen off the art world’s radar screen, and a reference book was needed,” says antique dealer Victor Gastou, who helped engineer the rediscovery with François Touret, one of the designer’s seven children.

The Call of the Wild
Touret was born in Mayenne in 1916, a time when France was still mostly rural. He grew up in a religious, somewhat austere family, with the countryside and nature always within reach. Touret took evening painting classes with the director of the Le Mans School of Applied Arts. But two bereavements brutally marked his young life. First, his father died prematurely. A few years later, war broke out. His brother Pierre was killed at Dunkirk. Jean was taken prisoner and sent to Germany as part of the forced labor of the Compulsory Work Service. But this difficult period far from home was an eye-opener. On the border with Czechoslovakia, he worked hard as a lumberjack and met rough but genuine farmers. He learned about austerity. Was it the call of the wild? In direct contact with wood and simple, beautiful souls, he had a kind of illumination: "Men are like trees," he said. After the war, he settled in Marolles, in the Loir-et-Cher, with his wife and their many children. They were a close and religious couple. Wanting to become a sculptor, he grew close to local craftsmen, created Les Artisans de Marolles and became its artistic director. "As an artistic guide,” writes Anne Bonny in the preface of the éditions de l’Amateur monograph, “he inspired a return to vernacular cultures combined with a desire to find their roots to revive the traditional civilization that was fading away before his eyes.” Touret did not just head the workshop; he rolled up his sleeves, picked up a gouge or a chisel and carved decorations on the furniture. “He created the honeycomb pattern with a gouge and worked on the wood to give it a nearly iridescent sheen, with an almost primitive design,” says Mr. Gastou. Touret also collaborated with basket-weavers, blacksmiths and other craftsmen for the furniture’s fittings. The small community took up subdued, almost monastic forms whose timeless dimension still stands out today.

The Hand of Man
It is striking to note that at almost the same time, Charlotte Perriand was also interested in woodworking, craftsmanship and rustic forms. But her sources came from as far away as Japan and she used a different vocabulary. Touret exalted the timeless France of the postwar period as industrialization was underway and the country was modernizing at a brisk pace. Society was changing. It was during this time of transition and transformation—And God created woman, the film with Brigitte Bardot that came out in 1956, must have made him shudder!—that the sculptor chose to emphasize tradition. His figurative decorations illustrated country life, couples’ daily lives, Bible scenes, the seven deadly sins, etc. Touret’s work must be seen as more than just a reaction to a changing world. It undoubtedly reflects his deep nature: it seems as though he could have chosen a religious vocation. A period documentary available on YouTube shows his elaborate, inspired way of speaking—almost like preaching. "Touret was a sociable man yet quick to take offense. comfy bourgeois ways of thinking made him bristle," writes Axelle Corty. At home, Touret had no telephone and never read newspapers but read the great mystical writers, such as Catherine Emmerich and Saint John of the Cross. He welcomed anyone who would listen to his poetic, prophetic discourses on humanity and creation, including beggars and people in emotional distress. To his children’s dismay, music, except for Marc-Antoine Charpentier’s Te Deum, was banned at home because he feared it would veer off into sentimentality.” What matters most is the august gesture of the hand. "Touret signified that he had learned the woodcutter’s trade, handling tools and respect for the wood’s grain from a carpenter," says Ms. Corty. "He also signified that, unlike many artists of his time, he had no use for intellectual theories. In the end, he was close to the humble, anonymous sculptors of medieval tympanums, who put their skills and faith to work in the service of a spiritual project.”

1959
Les Artisans de Marolles et de Loir-et-Cher is officially created in December. It is a craftsmen’s cooperative with variable capital and personnel.

Rising Value
Touret, who was close to the future Cardinal Monseigneur Lustiger, harnessed his hands and skills in the service of his faith and the Church. In 1963, he moved to Les Moutils, on the other side of the Loire, and from then on focused more on liturgical commissions, from which he made a living, often opting for a more modern vocabulary. He collaborated with the clergy countless times. His most striking work is an unnailed Christ in larch, his arms in a "V" shape as a sign of welcome. In 1964, he resigned from Artisans de Marolles but continued sculpting, notably commissions for the Château de Chambord, while pursuing his own work. On the one hand, he used an ax or a chainsaw to create large vertical prophets, almost like abstract totems, recalling the work of Zadkine or Wang Keping. On the other, he picked up a burin to carve large panels between cave art and Lucio Fontana. They will be on display this spring in Paris. Today, his secular furniture can be found in the market. Their prices began rising just a few years ago. In June 2012, a large dining-room table with a one-off chair and stool fetched €5,300 at Aguttes at Drouot. In December 2017, an oak stool from the 1950s went for €1,300 at Drouot, sold by Leclere Maison de ventes. A stool climbed to €1,560 at the same sale. Since then, prices have risen sharply. Many pieces have shown up at sales, especially in the areas where they were made. In December 2019, at Pousse-Cornet in Blois, a rectangular honeycombed oak table with a black lacquered wrought iron base fetched €12,000, ten times its low estimate. In July the following year, the Hôtel des ventes Giraudeau sold a large table with square legs for €17,360. In November 2021, a honeycomb table, comparable to the one sold in 2019, garnered €38,440 at the same auction house, while a light oak enfilade with carved honeycomb doors fetched €29,760. A desk with two blocks of cantilevered side drawers went for €24,700 at Piasa in January 2021. In May of the same year, again at Piasa, a bench reached €11,050 and four gouged chairs with wicker backrests €19,500, recognizing the high level of craftsmanship and quality.