Jacques Garcia’s ease at shifting back and forth between periods has been the secret of his success. After Versailles and the Louvre, he has followed in the footsteps of Francis I of France at the Château de Chambord. 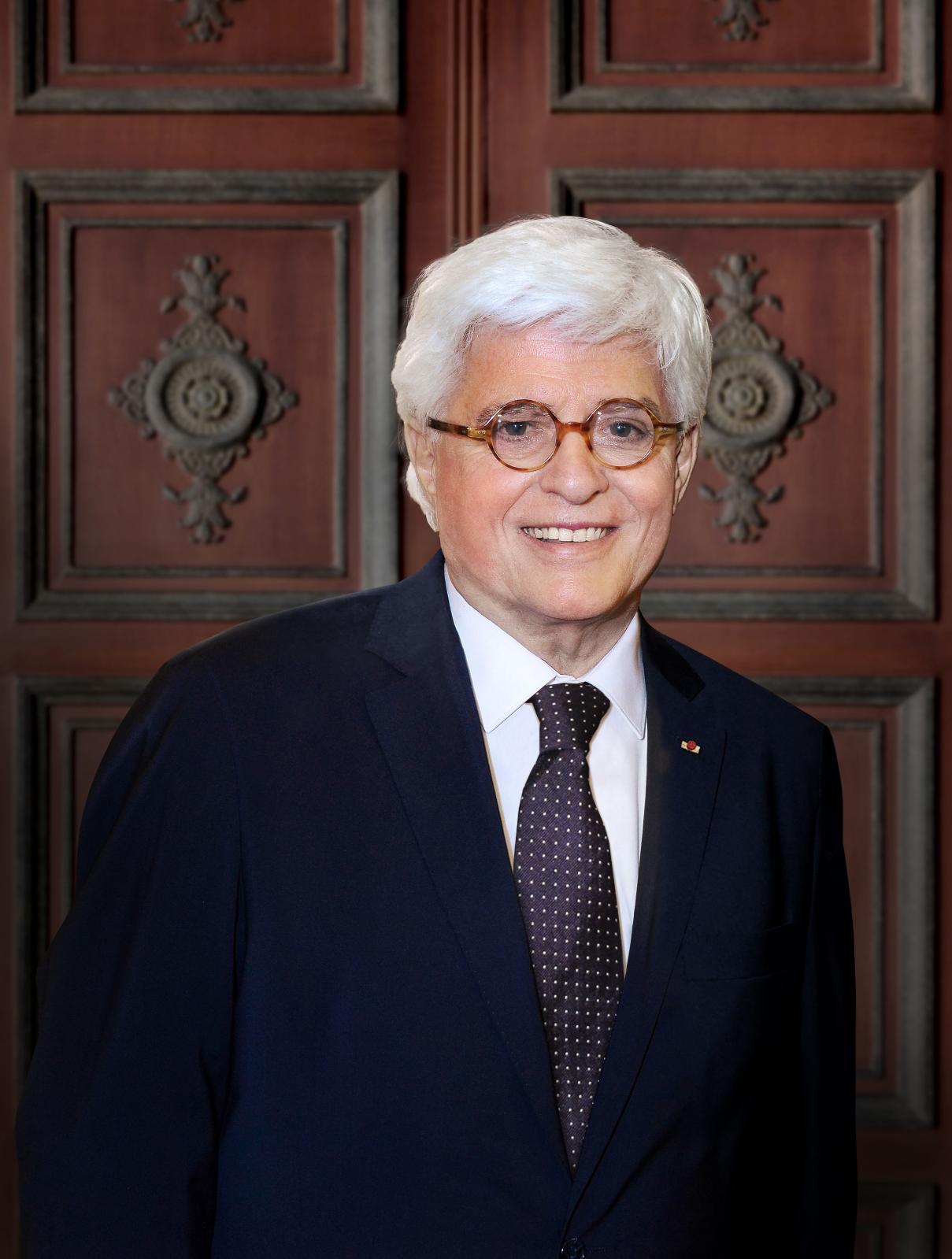 Decorator Jacques Garcia is renowned for his lyricism and outspokenness, which annoys some. But he is undeniably talented. A lover of decoration, the history of styles is his breviary. He juggles, reinterprets and stamps periods with his hallmark. Garcia was known as a 19th-century enthusiast when the Costes Hotel opened in Paris before becoming passionate about the 17th and 18th centuries with the restoration of his Château de Champ de Bataille and the redevelopment of Versailles. Now he has decorated Chambord in the spirit of Francis I. He can design very contemporary interiors but is also familiar with history.

How did this project come about?
To commemorate the 500th anniversary of Leonardo da Vinci's death and the birth of Chambord, Jean d'Haussonville, the director of the château, wanted to make things happen. Together we imagined a temporary installation faithful to the period. Francis I only had extremely short stays in Chambord. In the 16th century, the court would move from one castle to another carrying tapestries, silks, chests and furniture with it. So I redid the hall with loose drapes made by Frey based on a photocopy of a velvet fragment marked with the "F" of Francis I. A portrait of the king, his bust and a huge painting depicting the Field of the Cloth of Gold complete the scene. I hung old tapestries on the arms of the cross. Chambord has an extraordinary collection of them. They will be exhibited in turn, to keep them preserved. Antlers recall why the chateau and grounds were created in the first place: hunting. On the first floor, I redid the king's room and cabinet and draped tapestries on the arms of the cross again.

No furniture?
There wasn't much, a chest seat in the entrance and that's about it. So I had a wooden table copied from a 16th-century convent that’s in the Chateau d’Anet, perfect for displaying game after hunting. Around it, I placed folding and covered stools as seen in the Renaissance paintings. For light, I had paper cubes made based on the film Queen Margot.

The decor is sober...
In the spirit of the times. Chambord is an architectural wonder boasting an utter masterpiece, the sculpted staircase, which Leonardo da Vinci is thought to have designed. To set it off, the surrounding rooms’ walls have been left pure, unornamented. But tapestries used to hang on it. Some scholars say the mineral aspect of the place had to be kept, but the same people found it dreary before! That's typically French.

This minimalist decor seems like an exercise in style. We’re used to seeing you do lavish interiors.
It’s a mistake to think that. I adapt to what’s in front of me. I decorated Versailles and the Louvre, but also the Wynn in Las Vegas and the Metropole in Monaco. I'm Dr Jekyll and Mr Hyde. I go from one extreme to another!

Is the Château de Champ de Bataille still your life’s work?
It’s the most beautiful private museum open to the public. It’s got 50 objects that wouldn’t look out of place in the Louvre or Versailles. We’ve just obtained three stars in the Michelin Guide for collections, which is extremely rare for a private château. This is the climax of 50 years of purchasing.

Is there any furniture or objects bought from Drouot at Champ de Bataille?
Of course! Drouot is a godsend. At the office, we spot at least ten lots a week, but most of the time they’re for my clients. I can't afford them! Fortunately, I'm an insatiable hunter. Just yesterday I bought a chest of drawers from an antique dealer with the Versailles stamp for the Dauphin’s apartments, where it won't fit in.

"I adapt to what’s in front of me. I decorated Versailles and the Louvre, but also the Wynn in Las Vegas and the Metropole in Monaco. I'm Dr Jekyll and Mr Hyde!"

Versailles is like your home away from home.
I spent 10 years there donating my skills. We refurnished the Grand Couvert de la reine, Marie-Antoinette's interior cabinet, three rooms in the King's Great Apartments, the apartments of Mesdames, etc. I’ve worked to ensure that there’s an exchange between the Louvre, Versailles and the Mobilier national. Thanks to my intervention, the king's bedchamber was refurnished with things from the Louvre. That will never happen again, because museum conservators have the habit of being, well, "conservative".

Have you also rethought the Louvre’s 17th and 18th-century French decorative arts department?
Yes, 35 rooms, including about 20 period rooms. I don’t claim they’re historically accurate. I never do anything but evocations.

You had a very Second Empire reputation before this passion for the 18th century.
The Costes’ Napoleon III style was 24 years ago and has never been redone, which is something that can’t be said about other trendy Paris addresses. I created a setting for cocottes, in the positive sense of the word. Apparently everyone dreams of being a cocotte, given their success! But I already loved the 18th century just as much. Don’t forget, I lived in Mansart’s house in the Marais for 20 years. That’s when I became interested in historicism. Before then, I was designing contemporary decoration like everyone else. Then I thought to myself that I’d do the opposite. Today I'm going back to my roots! I’m currently working on the most beautiful project in the world: the transformation of the Hotel des Ambassadeurs de Hollande (editor's note: in the 4th arrondissement of Paris) into an ultra-high-end hotel with nine very luxurious apartments. It’s Madame de Montespan moving to Clagny!

Do you think your knowledge of history appeals to your customers, especially Russian ones?
Probably. Have you ever been to St. Petersburg? Russians don't come out of nowhere. Thanks to them, I decorated the prettiest house of my career in the English countryside, a 10-year project. Only the facades were left. I had carte blanche. I bought all the furniture: the hard stone cabinet Louis XIV gave the Queen of Sweden, one chest of drawers that belonged to Marie-Antoinette, the other to the Grand Dauphin.

You like royal provenances.
I’d rather say illustrious origins. It's true, I love them, for one simple reason: a major customer inevitably turns to a major artist, who will do everything and anything in his power to give him a masterpiece.

Is there anyplace you regret not decorating?
I’ve successfully decorated many hotels, the Costes, La Réserve, L'Hôtel, rue des Beaux-Arts, the Mamounia, etc. Everywhere, I’ve totally reinvented history. But when it comes to places with an extraordinary past, the Meurice, the Ritz, the Plaza, the Crillon, they don’t call me. The Crillon, the most beautiful place in the world, was for me.