Made for the road, Indian’s red-liveried, interwar, upscale Big Chief will stand out at a vintage motorcycle auction in Chartres. 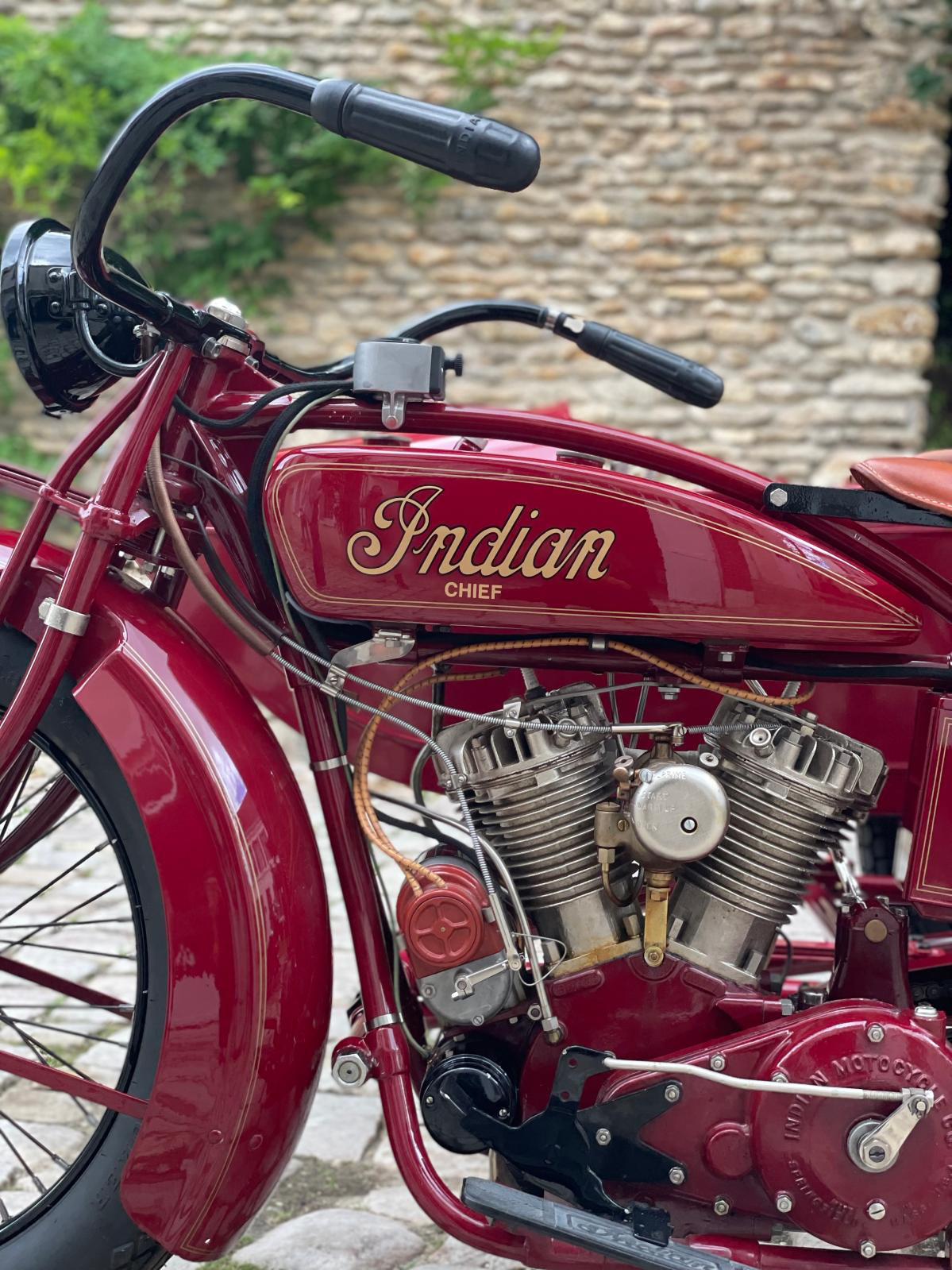 Indian motorcycles—unmistakable because of their logo featuring a profile of a feathered Indian chief—have fueled the American dream since the dawn of the 20th century. two intrepid, entrepreneurial bicycle-makers, George M. Hendee and Oscar Hedström, founded the legendary brand by opening their first plant in downtown Springfield, Massachusetts in 1901 when they delivered their first motorized two-wheeler. The motorcycle was ahead of its time: it boasted a concentric carburetor, coil ignition and an engine built into the frame. In 1908, the trailblazers came out with an innovation that revolutionized the motorcycle industry: the V-Twin internal combustion engine with two V-shaped cylinders, which henceforward was standard in all their models, like the famous Scout released in 1919. With an average displacement of 600 cc, the engine was hugely successful: over 40,000 were sold in 1920. This easy-handling bike was geared towards track racing, but soon the Springfield firm launched more powerful machines, in part to compete in the race for cubic centimeters (cc) with a major rival in Milwaukee by the name of Harley Davidson. After all, the slogan of the time was the bigger the better.

Road Bikes Engineered for Long Trips
In 1922, Indian introduced the first Chief, a 1,100 cc “big twin” designed by engineer Charles Bayly Franklin. A year later, Franklin designed the 1,210 cc Big Chief. “It was really conceived for long American road trips to cross the vast country from state to state,” says Julien Galoin, the sale’s consultant. Alone or hitched to a sidecar, the Big Chief could travel over huge distances at a speed of over 100 kph (62 mph). The machine’s sturdiness made it a prime choice for police departments; New York City’s even ordered an armor-plated version. The Big Chief soon became Indian’s most popular product. It was manufactured and improved until the company shut down in 1953.

Ours dates to 1927. It boasts a nickel-plated, four-speed, two-cylinder “V” shaped engine, side valves and a three-speed manual gearbox. The motorcycle comes from a major French collection, still has most of its original parts and was beautifully restored in keeping with the original architecture. In the spirit of the Roaring Twenties, it has a contemporary Princess sidecar. It is the spitting image of the Big Chief that belonged to actor and competitive motorcycle and racecar driver Steve McQueen’s famous collection of vintage motorcycles. His friend Kenny Howard, better known as “Von Dutch”, restored this legendary 1923 Indian in 1969. On March 9, 2014, it fetched $126,000 (€106,626) at Bonhams in Las Vegas.