In the Footsteps of Rosa Bonheur and Photography

Photography is omnipresent among the most recent discoveries made at the Château de By, Rosa Bonheur’s last home. Researchers are focusing on its role in the animal painter’s life and work. 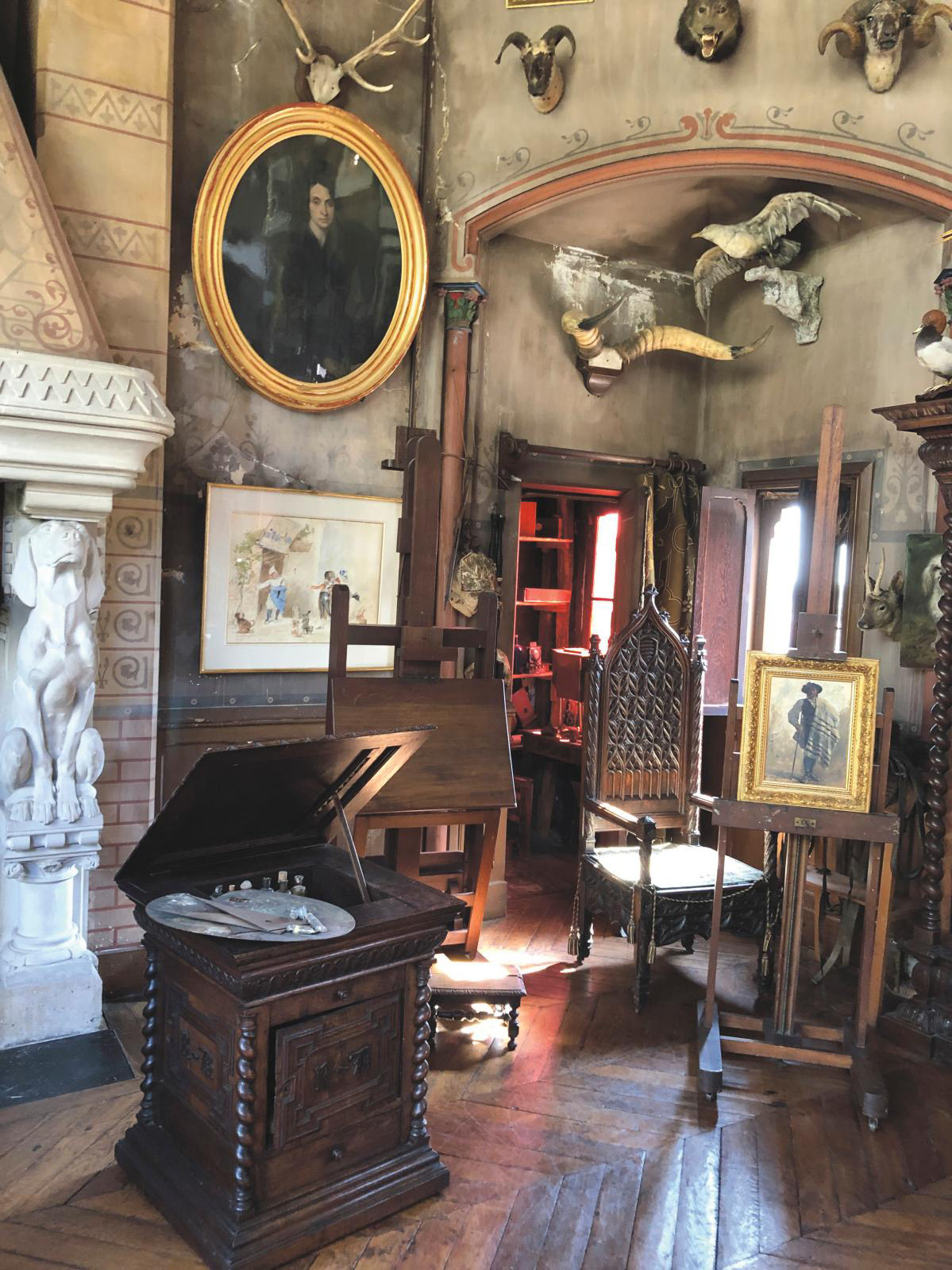 The bicentenary of Rosa Bonheur’s birth on March 16, 2022, kicked off a year of publications and cultural events, offering an opportunity to rediscover the work of a strong woman who was famous during her lifetime but quickly forgotten after her death at the age of 77 on May 25, 1899. “Le musée des œuvres disparues” (“The Museum of Lost Works”), an exhibition currently at the Château de By in Thomery (Seine-et-Marne), presents some of the finds made by Katherine Brault and her daughters, who have owned the property since 2017. With help from archivist Michel Pons, they have set about cataloging and classifying the thousands of objects and documents found in the vast residence where Bonheur spent the last 40 years of her life, including glass plates, paper prints and photography equipment. At first glance, the polished style of the Second Empire’s most famous animal painter, her attention to detail and texture and traditional techniques and subjects suggest that she wanted to remain outside her time, but this would ignore her adventurous temperament. Some contemporary critics called it “photographic” realism. Enthusiastic and inquisitive about everything, Bonheur was a frequent visitor to the Jardin des Plantes in Paris and deeply interested in the natural and veterinary sciences. She built a fine science library at the Château de By, which she acquired in 1859 and had electrified in 1898. Photography is omnipresent.

Many Questions, First Answers
Where, when and how did Rosa Bonheur practice photography? What about Nathalie Micas, her childhood friend, who moved into By with Bonheur and assisted her work? What place did photography have in their daily lives? In an effort to answer these questions, it is necessary to delve into the rediscovered material, scrutinize sources and Bonheur’s correspondence, published in large part by Theodore Stanton in 1910, and read the 1908 biography by her last companion, young American painter Anna Klumpke (1856-1942). Klumpke was an assiduous photographer, as shown by the 2,000 or so glass plates she made in preparation for the posthumous sale of Bonheur's studio collection at the Georges Petit Gallery from May 30 to June 2, 1900. They are precious testimonies to thousands of drawings and hundreds of paintings now scattered, mostly in private collections. Was Bonheur herself a photographer? Absolutely, according to Klumpke in her book: “Do you want a camera? Otherwise, take mine,” she suggested on June 17, 1898. A month later, she said, “Show me the picture I took the other day”. Another time, she told her a story about something that happened during a stay in Nice: “The imbroglio was caused by my innocent whim to photograph an Italian shepherd whose silhouette, at the head of his herd of goats, looked picturesque to me. The poor man wanted me to show him my proofs to make sure that I had not photographed the fort. He could not understand that if I had obeyed him, first of all he would not have seen anything at all, and the sunlight would have erased everything I had captured on them.” For the moment, there is too little information to know who introduced Bonheur to photography and when. The material found in her last home provides a little information, but it is sometimes very hard, if not impossible, to know who—Bonheur, Klumpke or even Micas—used this or that camera. It is also difficult to attribute certain glass plates and prints where they do not appear.

A Photo Lab in the Back of the Studio
Bonheur did her printing in an annex—her "sanctuary"—hidden behind a small door and a heavy curtain at the back of the studio. Julie Boudet, a photographer and expert on old techniques, says, “there is no doubt that the small room where all the chemicals and different kinds of papers are stored is a photo lab. The wall and storage cabinet are painted black, a tell-tale sign. The glass is red, the source of inactinic light. It is a very interesting, clever arrangement. There are also many press frames and glass plates in the room, still in place on small wooden drip pans.” Gelatin silver-bromide dry glass plates (a negative process sold in the early 1880s) are still in their boxes labeled Grieshaber Frères & Cie, Eugène Faller and Antoine Lumière & ses fils. Among them are the famous “blue labels” produced by the Lumière brothers from 1892 in Lyon that made them rich. Various bottles of chemicals to prepare the developers—potassium bromide, sodium sulfite, formosulfite, etc.—are stored in two porcelain trays labeled “bain de viro-fixage”. On a shelf is a box of sawdust used for printing on charcoal paper with the label of the Fresson company, which improved the process in 1899, as well as sheets and rolls of sensitive paper for citrate or gelatin silver-bromide prints from Willis & Cie, Biddell and Co, Eugène Chéron, Kodak and A. Lumière & ses fils. It is not yet known when the small laboratory was installed, but it was after architect Jules Saunier designed the room in 1859-1860. A large trunk filled with equipment was recently found in an attic. It contains neatly-stored early 20th-century cameras and glass plates, probably used by Klumpke, and older items that might have belonged to Bonheur: a camera, a Hermagis velocity graph manufactured from 1892 onwards, two tripods, a camera frame, a solar enlarger and two stereoscopic viewers, one of them still in its wooden box labeled “Chadburn Brothers”. Thousands of glass plates were also found; Mr. Pons has inventoried most of them. The majority is attributable to Anna Klumpke, but some continue to raise questions and are potentially by Rosa Bonheur. However, there are no more daguerreotypes: "Anna's heirs sold them to the same person, whose identity we have not been able to ascertain," says Ms. Brault regretfully.

Works in Their Own Right
From the 1850s and, especially, the following decade, photography was a thriving industry of which many artists, including Eugène Delacroix, Gustave Courbet and Claude Monet, took advantage. Bonheur used it as a means of communication, a documentary source, and an instrument of creation in its own right. “Here are the pictures of sheep in the park, buffalo in the snow and a stag in the mist. Do you like them?” she asked Anna on July 19, 1898, without, unfortunately, identifying the photographer. In the 1860s, dealers began selling photographs of her works, such as the famous 1849 painting Labourage nivernais (Plowing in the Nivernais), which entered Goupil’s “photographic gallery” in 1865. Photographs played a prominent role in Bonheur’s creative process. They were a documentary database classified by type of animal and environment, including a view of “the prairie and its vegetation” that Klumpke brought back from America in October 1891 for Bonheur, who wanted to paint buffalo grass; William Henry Jackson’s series on Indians; and Charles Durbin Kirkland’s photographs of cowboy life. Bonheur also owned Cheval Surprise (Surprise Horse), a daguerreotype that Louis Auguste Bisson made for her in 1842; an album of cattle and sheep breeds by Adrien Tournachon, the younger brother of Félix Tournachon (Nadar), from the 1856 Universal Agricultural Show in Paris; and Adolphe Braun’s early 1860s wet plate collodion photographs of animals on his farm in Dornach, Alsace. Where did Bonheur get her supplies? “There’s no indication on most of the documentary photographs,” says Mr. Pons. Others bear the stamps “Foncelle” or “Hautecoeur, ancienne maison Martinet”, deux marchands parisiens” (“Hautecoeur, former Martinet House, two Parisian dealers”). Some, by Rosa or her entourage, feature animals and loved ones in By and Nice. They are dry gelatin silver-bromide glass plates, cyanotypes recognizable by their bluish tint and albumin, salt, coal, gelatin bromide and, perhaps gelatin silver-chloride prints on paper. Ms. Boudet’s first expertise must be refined. These photographs show how hard it was to fix the image of certain animals in motion. They are often blurry, even though exposure time had been considerably reduced in the 1870s.

Les Oeuvres Choisies – An Exhibition Not to Be Missed