Hong Kong has consolidated its presence as the Asian capital of the art market, but for how long? 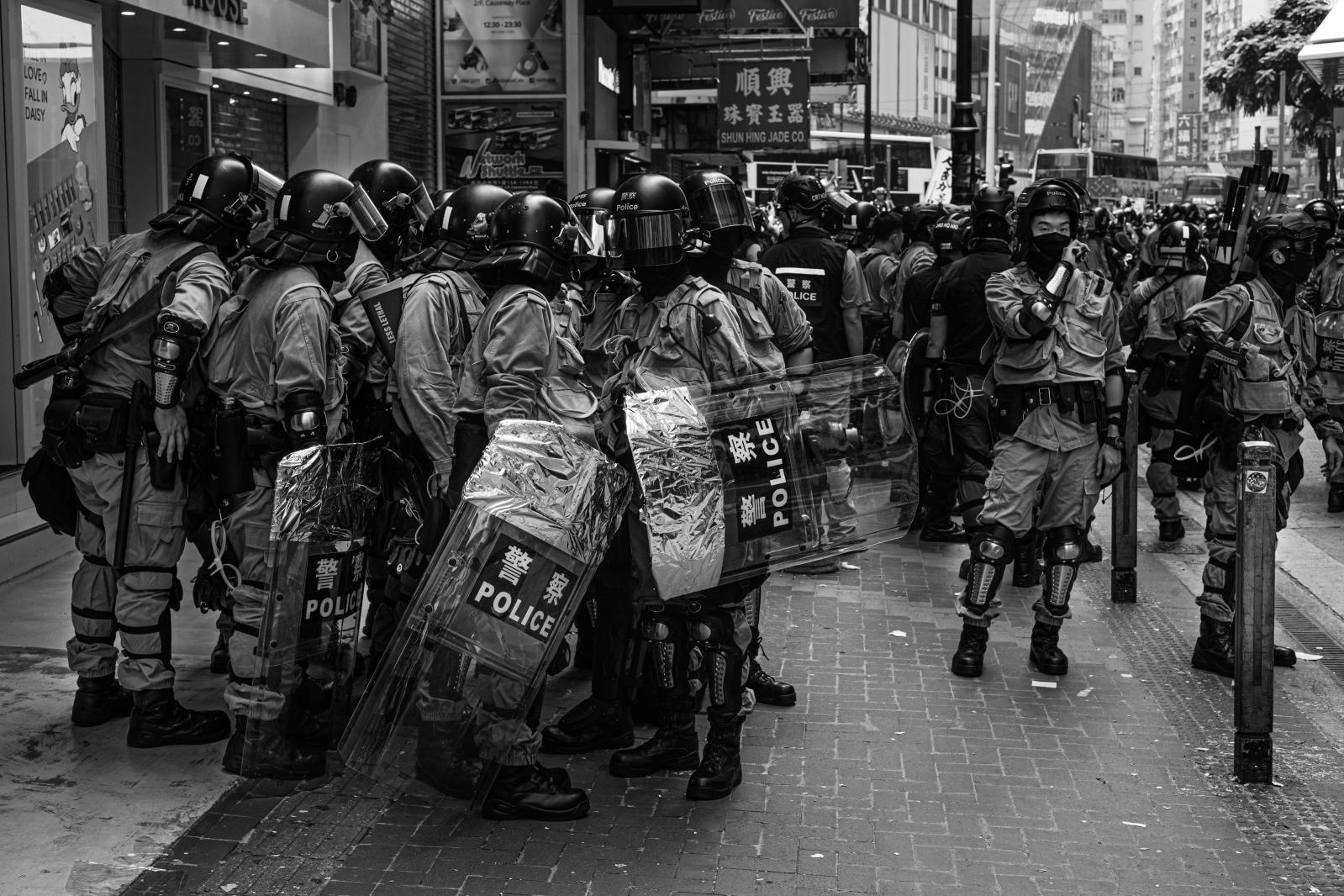 It is 6 October and the hammer has just fallen on Yoshitomo Nara’s Knife Behind Back, for HK$195.7 million (US$24.9 million): a new auction record for the artist. The Sotheby’s staff are delighted with the impressive result. Nara’s doe-eyed girls had never reached even the US$5 million mark before. It would be just another regular auction evening in Hong Kong if the Sotheby’s salesroom in Queensway weren't a short 10-minute drive from the Mong Kok Station, where a massive riot is taking place, leaving smashed windows and an elevator on fire in its wake. How could the art market be so unaffected by the political unrest going on in a city on the brink of a civil war, between liberal Western values and the Chinese Communist Party?

A scar on Chinese pride
To truly understand the eruption of present-day tensions, we need to go far back in time to 1839 and the first Opium War between the British Empire and China (the British took the Chinese to war for the right to export opium to the country). The highly addictive drug was having severe consequences on the population, and maybe more importantly, generating a trade imbalance between the two countries. Militarily inferior, the Chinese were forced to sign the 1842 Treaty of Nanking, one clause of which ceded the island of Hong Kong to the British, starting what Chinese historians call “The Century of Humiliation”.
The occupation ended in 1997 when the city became semi-autonomous, under Chinese rule but with freedom of speech, press and assembly, among other Western values. This system was to remain in place for 50 years until 2047, when Hong Kong would finally become fully Chinese again. The big problem is that after having a 150-year taste of freedom and human rights, the Hong Kong population is not keen to return to the highly censored, state-controlled Chinese model. So the city fights back every time China – which holds a majority in the parliament (not all seats are elected through the overwhelmingly pro-democracy popular vote) – tries to pass a bill strengthening its control.

Asia’s art market capital
Over time, Hong Kong has built up its reputation as a financial hub with very liberal trade policies, becoming extremely suitable for high value assets that can be easily moved from one place to another: artworks. The art market today is highly globalised. Just as companies move their fiscal domicile from country to country, seeking the best tax exemptions, major collectors (many of whom own these companies) can buy and sell art anywhere to maximise their wealth. François Curiel, Christie’s Chairman for EMERI & Asia, corroborates this vision, where the art market is not limited by physical presence: “A presence in the saleroom has long been unnecessary for these transactions, facilitated through phones and the internet. The only deal-breaker would be a traumatic economic disaster that cripples cash flows and credit lines.”
Sotheby’s held its first auction in Hong Kong in 1976, followed by Christie’s in 1986. Larry Gagosian, once again demonstrating a visionary instinct, was the first major gallery to open doors there in 2011. Perrotin followed in 2013 and finally, in 2018, other juggernauts like David Zwirner, Pace and Hauser & Wirth opened spaces at the H Queen complex. To complete the holy trinity of the art market capital with major auction houses, major galleries and a major art fair, Art Basel Hong Kong held its first edition in 2015, becoming Asia’s most successful art fair with over 80,000 visitors every year.
Although Hong Kong’s trade policies were already favourable, the city had to wait decades to become Asia’s art market capital. The bulk of Asian collecting in the 1980s and 1990s was in fast-growing Japan, which soon burst the bubble. The emergence of China’s flexible communism in the 21st century, generating billionaires and bringing attention to the region, also helped Hong Kong to become a place where the brand new Chinese global power met economic liberalism and individual freedom. China's economic growth in the period paradoxically made Hong Kong more famous with the rest of the world but economically less important to mainland China. In 2018, the city’s GDP was merely 3% of China’s, in contrast to 27% in 1993. Hong Kong’s success in the art market is inextricably related to China, adds Curiel. “With a population of 1.43 billion, China has people power, hence the resources and financial prowess to sustain a vibrant commercial art market, with enough talent and diversity to fuel a domestic art world, generating export quality art. If China is limited by import duties, Hong Kong is the liberal, pseudo-Western conduit for the motherland: a role it has been performing for centuries in various shapes and forms. Talents and capitals are attracted to wealth and vice versa.” Despite all the previous buzz, 2017 was the year that made Hong Kong what it is today for the art world, when goods to the tune of US$3.9 billion were sold at auction in the city: an impressive 90% hike on the previous year. It is true that 2018 saw a decline in auction sales, with US$3.1 billion, but it is still the second largest figure in history by a long way. Last year, Sotheby’s Hong Kong achieved a glittering sale with Zao Wou-ki’s tryptic Juin-Octobre 1985, the most expensive Chinese artwork ever sold at auction, at US$65.2 million. Zao Wou-Ki became the highest selling contemporary artist of 2018, ahead of Jean-Michel Basquiat and Andy Warhol. While the bulk of the art trade in China is in antiques and decorative art, Hong Kong is the main spot for oil paintings: something much more feasible and understandable for Western collectors. Yoshitomo Nara, the Japanese artist whose record was broken at Sotheby’s Hong Kong just as protests were erupting in the city, became the most expensive Japanese artist ever sold at auction, showing that Hong Kong is not only the capital for Chinese art but for Asian art as a whole.

Exit through Singapore
It is true that the art market seemed unshaken by the riots, at least superficially, but attention started to focus on the city-state of Singapore as a solution in a Hong Kong doomsday scenario. Although not as close to China, the city shares two very interesting characteristics with Hong Kong: liberal trade laws and a large number of millionaires. In fact, according to the 2019 Art Basel Report, Singapore collectors have a very similar profile to those in Hong Kong. Singapore has one of the world’s biggest GDP per capita (in purchase parity), with US$87,281 per inhabitant, second only to Qatar, followed by the UAE, Switzerland and Hong Kong. The collector's profile is very similar: a high proportion of millennials and women collectors, who tend to be more open to modern and contemporary art. Collectors from both countries do more research before buying an artwork, looking at every possible platform. And while “passion” is still the most important variable when it comes to a purchase, “return on investment” comes second for collectors in Hong Kong and Singapore. International collectors are not particularly interested in where an artwork is sold, as long as taxes and shipment costs stay the same.Potentially profitable though it might be, Singapore is currently at zero as regards the holy trinity of the art market capital. Neither Sotheby’s nor Christie’s has salesrooms there; the same goes for major galleries, and Art SG Art Fair has thus far been a failure. It took Hong Kong 40 years and considerable investment to establish itself. The idea that it could be rapidly replaced by Singapore seems far-fetched, especially as not the slightest move has been made in that direction. “Hong Kong still has a lot of edge, a lot of advantages in terms of art trade, the free-tax policy, the considerable efficiency of HK people, well-established logistics and trade support with multilingual communications,” says Cindy Lim, a partner with Tang Contemporary Art.

The wait until 2047
Hong Kong is not due to become a Chinese state until 2047, when the 50-year “one country, two systems” agreement ends, but China is already taking the necessary steps to assert its dominance in the tried-and-tested Chinese way: patiently, little by little – as with the South China Sea, where China has slowly built artificial islands, only detectable through comparisons of satellite images of the region, to control sea trade, causing a dispute with the Philippines. The same goes for the Senkaku Islands, this time with Japan as its adversary. We probably won’t have to wait until 2047 to find out if Hong Kong will still be the liberal city it is today, with free customs, no taxes and a flourishing Asian art trade. In the same way that China is taking small steps, Hong Kongers are vigilant and not afraid to protest on behalf of their individual liberties. The art market is caught up in the middle of the most topical political conflict in Asia, and while it is technologically insulated, with no power to influence the situation, maybe it is time to start looking for viable alternatives. In the meantime, Hong Kong looks set to stay in the headlines, for broken auction records and shop windows alike.