After over a year of work, Hauteville House, Victor Hugo’s residence on Guernsey, reopened on April 7th. A philanthropist’s outstanding generosity enabled the lavishly whimsical interior decoration to be restored. 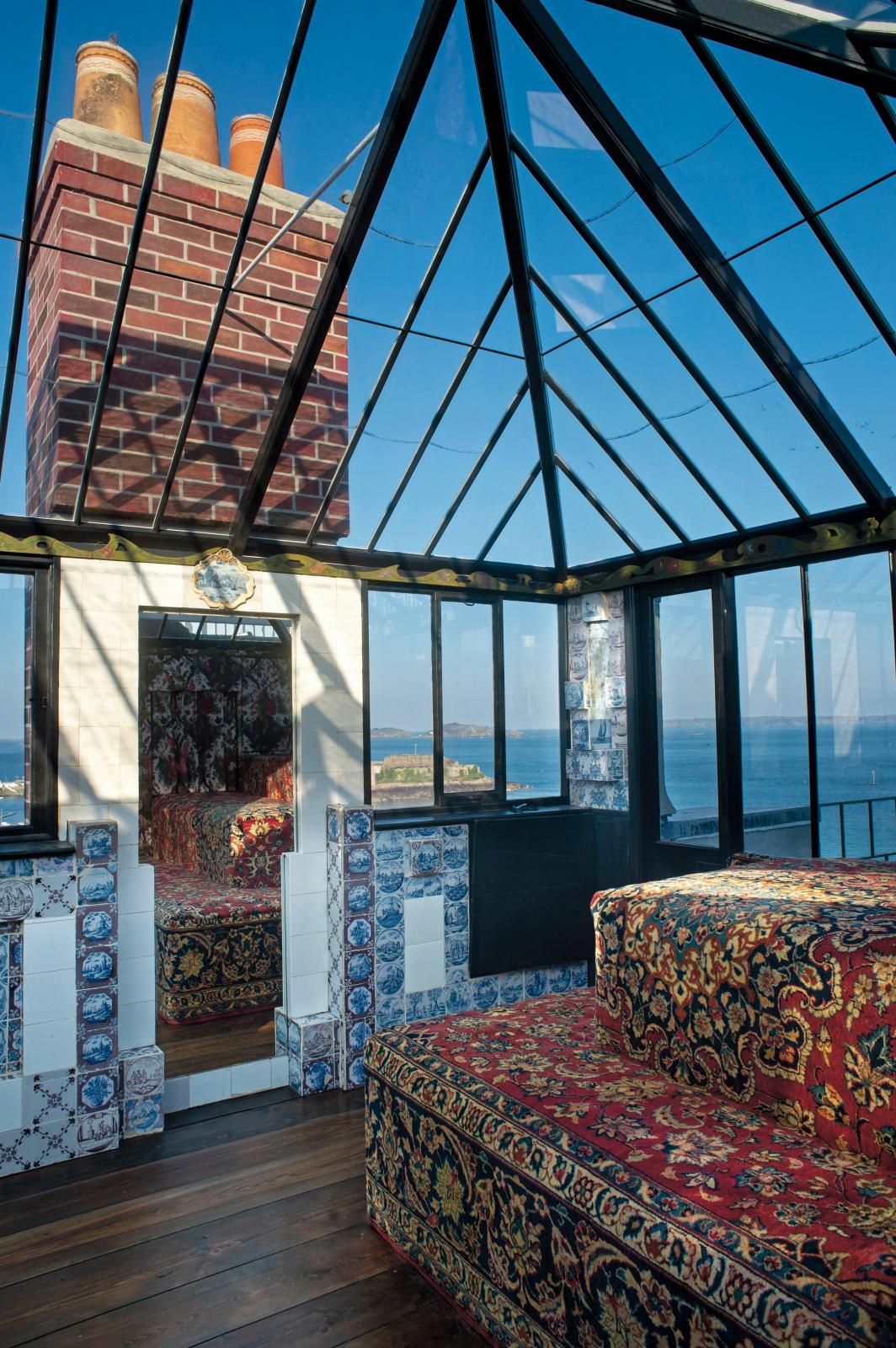 The “haughty” and “august” oak tree Hugo planted on July 14, 1870 overlooking the weather-beaten coast at the back of an impeccable garden no longer stands. To avoid a third political banishment after Brussels and Jersey, since 1855 the writer had been living in exile on Guernsey in the only home he owned during his lifetime. With that tree, a symbol of peace and republicanism, Hugo also planted his hopes of seeing a “United States of Europe” take root one day. Damaged by herbicides, it fulfilled its destiny. The tree lived its last moments just as the opening of the renovated Hauteville House coincided with the height of the Brexit crisis. To keep the house from meeting the same fate as the oak tree, the City of Paris, its owner since 1927, renovated it from top to bottom in record time (18 months). Guernsey is a dependency of the British Crown, so the prospect of Brexit, which was supposed to occur on 29 March, imposed a strict deadline. Structural works were urgent after years of leaks on the façade. A fierce opponent of the death penalty, Hugo stubbornly refused to put in fenêtres à guillotine, sash windows, despite there being more suitable for the Norman climate. For this colossal €4.3 M job, the City of Paris only spent €800,000 of the €100 M earmarked to renovate the entire museum complex, including the Victor Hugo House in Paris, which closed on 15 April. Help came from the Fondation du Patrimoine (€79,000) and, above all, probably less providential than solicited, philanthropist François Pinault. In front of Paris Mayor Anne Hidalgo, the Breton tycoon, more accustomed to supporting contemporary art than heritage, said he opened his treasure chest “for Hugo the visionary and rebel, but also for his empathy with the neediest, which is what our politicians lack the most today.”

Eccentric Motifs
In April 2016, Pinault obtained a promise from Hidalgo of an emphyteutic lease at the Commodities Exchange (Bourse du Commerce) to house his collections there. Preparations for the Hauteville House project started several months later. Jean-Jacques Aillagon, who worked at the Paris Department of Cultural Affairs from 1985 to 1995 and now heads the Pinault Collection, has in-depth knowledge of the issues relating to its state of conservation. He helped to convince Pinault to shell out €3.5 million to “change the scale of the work, originally planned to be minimal”, says Gérard Audinet, curator of the Hugo houses on Guernesey and the Place des Vosges in Paris. Result: in addition to completely changing the door and window frames, redoing the porches and renovating the crow’s nest, the façade’s original color was restored. White since the 1950s, it is now the original “prison gray”, brightened up only by the “salad green” windows. Saying there is a contrast between the austere exterior and the lavish interior, entirely restored and recreated, puts it mildly: not a single square millimeter is left empty. Eccentric motifs are teeming everywhere, stimulating the eye and mind at every instant. Royalties from Hugo’s collection Contemplations enabled him to afford the house, where worlds, periods and inspirations overlap. On the first floor, neoclassical candelabra mingle with vulgar gilded garden dwarfs and Japanese ceramics, an embroidered silk canopy, a room wrapped in red velvet and Persian carpets, doors adorned with Chinese motifs and a ceiling covered with a stretched tapestry of pearls. In the kitchen, a neo-Gothic ebony cabinet made of 17th-century chests and credenzas bought at antique shops on Guernsey is set with Delft tiles and medieval or Renaissance sculptures.

“Nobody has Hugo’s taste”
Hugo’s obsessiveness caused his wife and three children to flee, stifled by the oppressive interior, although they probably also left because his mistress Juliette Drouet lived nearby. Restoring and recreating the furniture has been done so skillfully that visitors cannot tell the difference between what is original and what has been added for atmosphere. Influenced by English period rooms, the modern feline hide in Hugo’s bedroom is similar to a carpet seen in old photographs. Only the ceiling tapestries and some chandeliers have not been restored yet. “Based on period photographs and Hugo’s notes and correspondence, we’ve tried to restore the house’s diversity and spirit, whose accuracy had been completely lost,” says Audinet. Some 200 artisans recreated the damask based on original models, put a patina finish on furniture that has been returned or reworked the colors based on information in archives. “The research and work gave me a different understanding of Hugo,” the curator continues. “I discovered that he had no fear of colors and mixed many points of white to brighten up the interior.” Hauteville House reveals a born decorator’s more than a writer’s interior. Pinault says, “Nobody’s taste is like Hugo’s.” The house reveals another man, far from the boring commonplaces children learn in school. He did not write a single play on Guernsey, but his handling of colors and periods and unique combining of the sublime and the preposterous recall that he was a dramatist who might have been inspired by the legend that the house was haunted. His playfulness can also be seen in the phrases, quotes and literary allusions scattered in the most unexpected nooks and crannies. His admiration for Molière and Shakespeare, whose names he inscribed in the kitchen, and his contempt for “Napoleon the Small”, expressed on a piece of wood he engraved with “Bon roi, roi qui s’en va” (“A good king is a king who goes away”), attest to how the house is less an exile’s refuge than an autobiography. To those who look closely enough, it reveals the contradictions of an unclassifiable genius, a believer and a republican, a young royalist and a sage of the left, a writer, illustrator and decorator. Some call Hauteville House dark, serious and oppressive, but it was where Hugo finished The Man Who Laughs the day before he set foot on French soil again when the Third Republic was proclaimed on September  4, 1870.