British painter, writer, female Surrealist, Mexican artist and eco-feminist, these are just some of the terms used to characterize Leonora Carrington, but her art and life resist any strict definition. 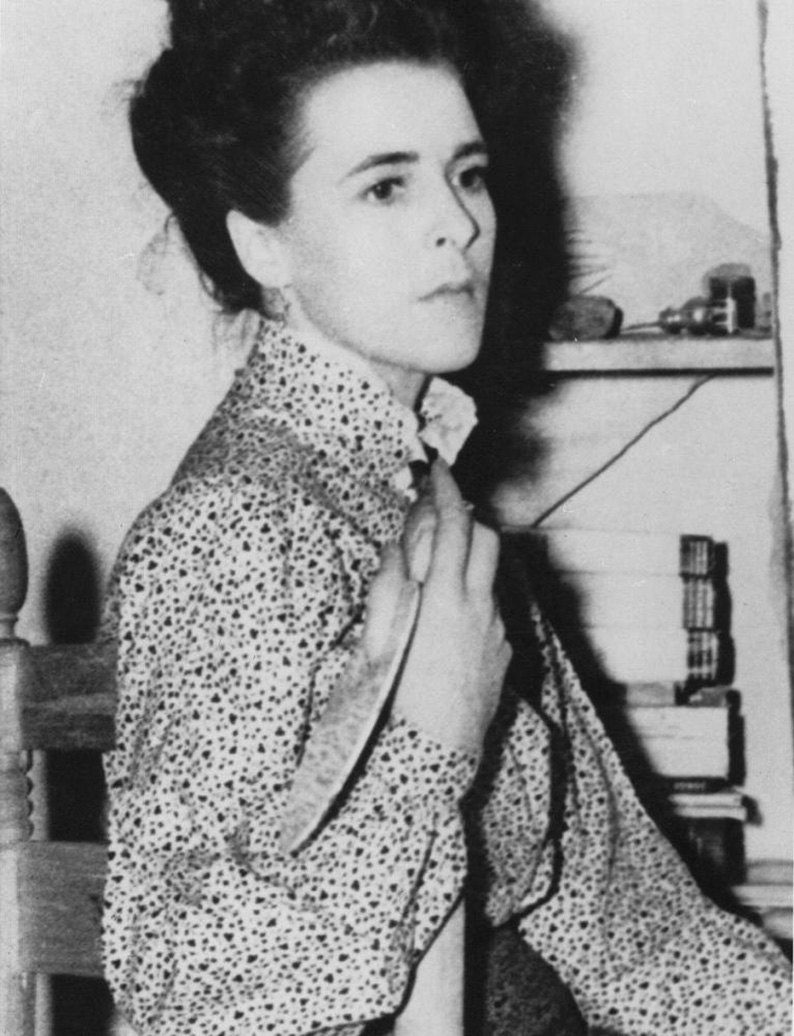 Leonora defied her aristocratic upbringing to run away and join the Surrealist ‘circus’ in Paris, and through the tumult of the Second World War found her way to Mexico City. While she died in 2011, the legacy of her untamable spirit and creative mysticism reigns on: inspiring artists, writers, and musicians from Madonna and Björk’s video for Bedtime Story in 1995, to Tim Walker and Tilda Swinton’s i-D magazine spread in 2017. Her paintings and stories serve as visual punctuations of the changes and thresholds Leonora transgressed, and provide keys to unlocking her mythic ‘story’.

From Debutante to Femme Enfant
When Leonora was born in 1917 in Lancashire, her parents had prearranged the path before her, but from a young age she had other ideas. Expelled from numerous catholic boarding schools in England, her parents nonetheless tried to wrestle with her wilful spirit: presenting her at Buckingham Palace as a debutante, wishing to better their social status through an advantageous marriage for their daughter. Leonora chose instead to study fine art in London, where she attended Chelsea School of Arts and Amédée Ozenfant’s Academy. She first encountered Surrealism and Max Ernst (1891-1976) at The International Surrealist Exhibition in London in 1936. She began a fascination with Ernst’s artwork and the following year, through an introduction by the architect Ernö Goldfinger (1902-1987), she met the artist and the two became lovers. Against the wishes of her family, she went with him to Paris, where she was introduced to André Breton (1896-1966) and his Surrealist coterie. Breton was immediately taken with, what he saw as, the femme enfant quality of Carrington, a young beautiful artist embracing her desires in Paris, having escaped the overbearing control of her family. In his Anthology of Black Humour (1940), Breton described an anecdote: “The respectable persons who invited her to dine in an elegant restaurant … have still not gotten over their embarrassment at noticing that, all the while taking part in the conversation, she had removed her shoes and was patiently slathering her feet with mustard.” For Breton, she represented an ideal muse for the male surrealist artists with her ‘uncanny’ acting out and peculiar mannerisms. Leonora very much denied any notion of this: “I didn’t have time to be anyone’s muse … I was too busy rebelling against my family and learning to be an artist.”

A Journey Towards Mexico
Ernst and Leonora’s relationship only lasted two years and yet so much has been weighted on his transformative effects on her life. In 1939, as a German citizen, Ernst was interned as an enemy alien leaving her alone in their home at Saint Martin d’Ardèche, in Southern France, which had serious consequences on Carrington’s mental health. Her English family saw it as an opportunity to snatch her back and had her sectioned in a mental asylum in Santander, Spain. To escape the clutches of her family, she married a Mexican diplomat, Renato Leduc (1897-1986), enabling her safe passage to New York, joining the European surrealists in exile, with whom she affiliated herself until 1943 when she moved to Mexico. In Mexico, she married Emerico “Chiki” Weisz (1911-2007), the Hungarian photographer, with whom she would remain for the rest of her life. They had two sons Paulo and Gabriel; motherhood suited Leonora but she found the workload was unfairly distributed: “We need a wife, like men have, so we can work all the time and somebody else would take care of the cooking and the children”.

“If all the women in the world decide to control the population explosion, reject war, reject sexual or racial discrimination and force men to allow survival in the planet that would be a true miracle” (Leonora Carrington, 1970, from Celtic Surrealist exhibition catalog).

Leonora has inspired a wide fascination with anecdotes peppering scholarship about her life from putting bloody handprints from her menstrual blood onto the walls of Luis Buñuel’s residence to slathering her feet with mustard at a dinner party as described by Breton. However, these ‘mythic’ renderings of Carrington only serve to further her as a source of curiosity. These anecdotal tales of her life can be seen instead as signifying her strong relationships with the artists and intellectuals around her. In Mexico City she found kinship with a creative community, including Frida Kahlo (1907-1954), Luis Buñuel (1900-1983), Remedios Varo (1908-1963) and Kati Horna (1912-2000). Escaping the heavy masculinity of the European Surrealists, in Mexico, she celebrated the local folklore, the mythic, alchemy and magic, and her paintings and written fiction became embodiments of feminine power. Her novel The Hearing Trumpet was written in 1974 shortly after her first interactions with the Women’s movement in Mexico City, where she developed a fervent feminist stance on environmental issues. Imagining a world without men seems to be a reverie of her paintings and literature, and she propagates a healing curative capability for women.

Escaping the control of her British family and the Surrealist notion of the femme enfant muse from her brief dalliance with Ernst, Leonora’s truly creative life really began in Mexico, where she reclaimed her own feminine powers for her own ends. Leonora Carrington died in 2011, and her friend, the feminist scholar Gloria Orenstein, described, “I am truly elated that she lived long enough to see her art attain the worldwide recognition and adulation that it has”. Leonora was unusual as a female artist to have experienced her international success during her lifetime, albeit in her later years. In her lifetime she saw unprecedented auction prices, The Juggler (1954) made the highest price ($713,000) for a living surrealist painter in 2008 and in 2009 The Giantess (c. 1947) reached over $1,000,000. Most recently, The Temptation of St. Anthony (1945), inspired by Hieronymous Bosch’s painting of the same subject from 1500, reached $2,629,000 in 2014, the highest price for her work to date. These prices are symptomatic of a sharp rise in desire for Leonora’s work and the female surrealists on the art market. Carrington’s paintings sit in private and public collections internationally, including notable Chicago-based Helen Zell’s and London based Catherine Petitgas’, as well as institutions such as the Museum of Modern Art in New York, The Tate in London among others. Since the early 1990s, she has been the subject of numerous international museum exhibitions, most recently "Leonora Carrington: Magical Tales at Museo de Arte Moderno in Mexico City" in 2018 and "Leonora Carrington: tu país" will be unveiled at Fundación Mapfre in Madrid in 2023, postponed because of the health crisis. The magical world of Leonora continues to fascinate, her legacy is valued both in the market and in the museum.