In their 30-year career, Gabriela and Mathieu Sismann have become the go-to dealers in the antique sculpture market. In June, they are taking part in BRAFA, and, for the first time, in TEFAF Maastricht. 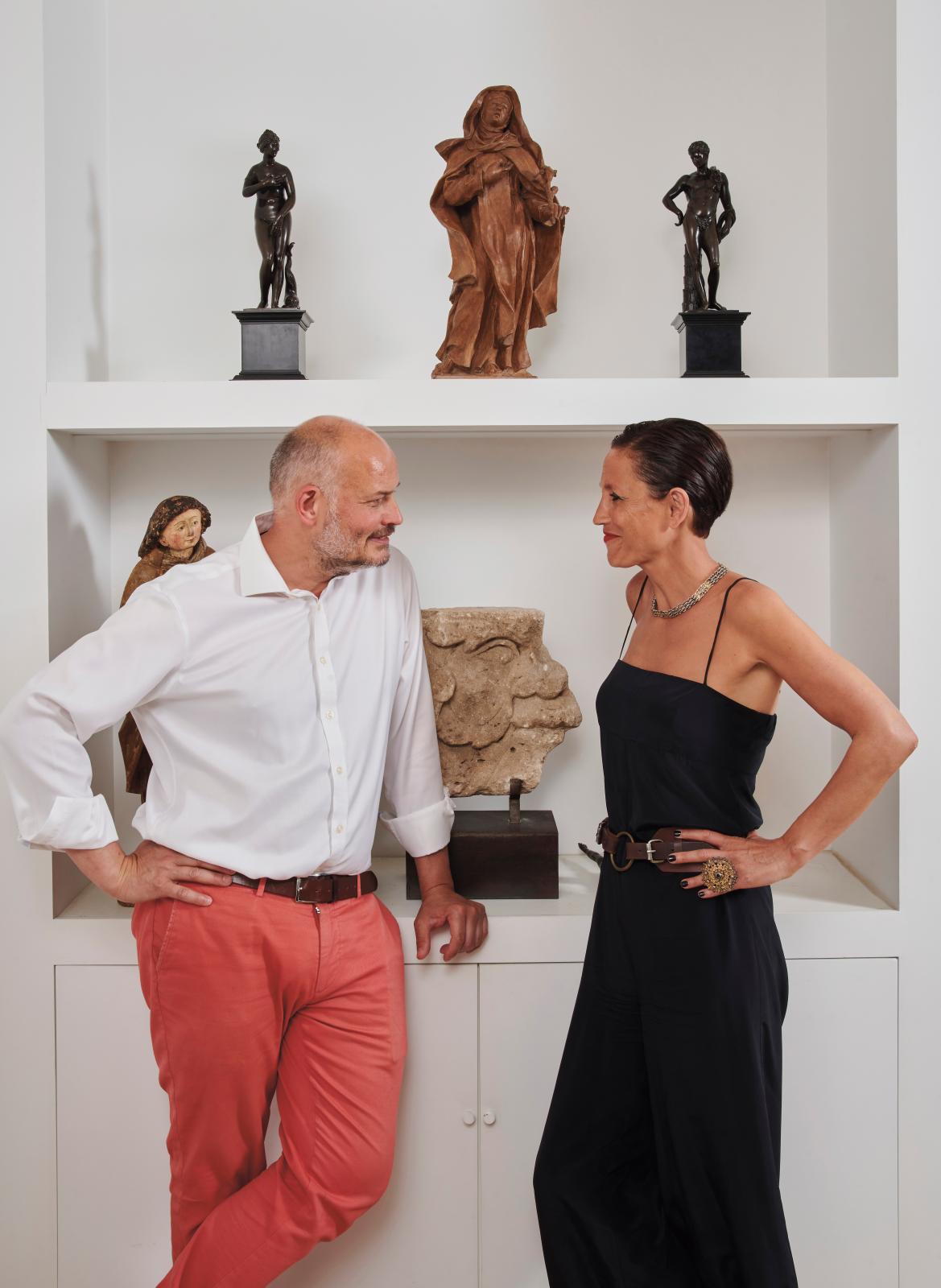 Did your move to Quai Voltaire in 2019 affect the way you work?
Gabriela Sismann. We moved to Quai Voltaire right before the pandemic—unfortunately at just the wrong time for our business, which suffered enormously. We had not only to hold out, but also learn to develop the tools we had already incorporated into our way of working—video, the Internet, social media, etc. We were experienced in this respect, and I think that made us better prepared to deal with the shock. So it wasn't our new home that led us to work differently, but the health and economic context. More generally, the way people consume art has changed, as has the relationship with gallery owners and specialists. I don't want to say it has disappeared, because we still have intense, enriching exchanges, but it is less present than before.
Mathieu Sismann. Although we have lost the spontaneous aspect of strollers wandering into the gallery—and this was already the case when we were in Rue de Beaune—we are getting customers back thanks to the Internet, social media, word of mouth and our reputation. Today, customers need much more reassurance than before.

What do they want to be reassured about?
M. S. The authenticity of pieces, and their traceability. These criteria are obvious with archaeology, but the trend is intensifying with all specialties, ours in particular, and provides added value. G. S. Added value also comes from the intellectual and scientific aspect we consider so important: we research our objects in great depth, and publish an annual catalog of major pieces. For the past three years, we have also published thematic catalogs with thorough, detailed studies. The word "scholarly" expresses our approach, one without any pretension, more in keeping with the spirit of the UK, US and Germany.
M. S. We have created a network of scientists and researchers within and outside France, who support us in these efforts. Without them, we could do nothing.

Can you give us an example of this collaboration with scientists?
G. S. Well, there was Christ at the Column, which Mathieu believed was the work of François Duquesnoy (1597-1643) and more precisely a pendant to the Ecce Homo in the Rijksmuseum in Amsterdam. Our collaboration with the museum (which was not the first) wrapped up in 2021, but it was a long process: we had found this bronze in 2015 and exhibited it at the Paris Biennale, Masterpiece London and BRAFA between 2016 and 2021. M. S. The collaboration was highly productive. Identification was confirmed by an X-ray comparison of the two pieces and further analysis, which proved that the bronze alloy used in both sculptures was the same. The museum eventually bought Christ at the Column and attributed it to François Duquesnoy.

Does your passion, curiosity and interest in your subject encourage you to collect?
M. S. We live very closely with our pieces, but we are not collectors. My father is a collector, and still buys works every day, so I understand his obsession completely, as I’m the same! But we have managed to get past it by becoming dealers, meaning that we buy objects to pass them on; we don't need to own them. Sometimes objects even come back to us, as art lovers’ lives and collections take a new turn.

Can you give us an example?
M. S. When we were young dealers, we discovered a Languedoc Virgin from around 1500 at Drouot, which we then sold at the flea market to a collector with whom we kept in touch. When he started to sell off various objects, we told him we would buy the work back if he wanted to sell it to us. This he did, a year or two later. We then exhibited it at the Salon du Collectionneur, our first major Paris show, where this time it was bought by a Dutch dealer. He showed it twice at the TEFAF in Maastricht, but without success, and then told us he wanted to retire. An opportunity to get the Virgin back! That was two years ago. In November 2021, it was the highlight of our stand at Fine Arts Paris. It’s now in a private home in Paris.

Why was it important?
G. S. It has a stylistic parallel with the Virgin of the Annunciation now in the Musée des Augustins in Toulouse, Nostre Dame de Grasse. It is a magnificent piece of outstanding quality, in perfect condition, rarely exhibited and not very well documented.

How much did the price of this piece increase between 1994 and 2021?
M. S. The price rose tenfold in almost 30 years. Pre-modern sculpture is a tiny, very trend-oriented market. Stone, for example, fell out of fashion with the closure of our predecessors, the Boccador and Bresset galleries, and the market collapsed. Now we are supporting it and it has recovered—but after us, perhaps it will collapse again.

You will be participating in TEFAF Maastricht for the first time in June. What are you going to exhibit?
G. S. Among our large selection of early European sculptures, a number are making a first appearance, like this important Renaissance bronze Christ based on a drawing by Michelangelo, a very rare portrait of Anton Fugger in polychrome limewood by the Swabian school, and a magnificent Mary Magdalene by Benedetto da Maiano, which comes from a prestigious American collection. It has never been exhibited, either in a museum or at an international fair. It’s a first—and by a great Quattrocento master, to boot!

What will you be showing at Fine Arts Paris and La Biennale in November?
G. C. We have selected a previously unseen 14th-century polychrome terracotta Virgin from the Ile-de-France (around €250,000), another Virgin from Lorraine (between €150,000 and €180,000) and a Quattrocento bust, also presented for the first time.

Gabriela, you have also developed a new activity: designing jewelry…
G. S. I start off with pieces from my favorite period, and make them wearable. The concept is to wear works of art, demythologize them and make them accessible. A fragment of a Renaissance belt might become a necklace; a button from an 18th-century court suit might be mounted in a ring, or a silver medallion from a 17th-century Dutch cabinet could turn into a necklace. This piece was requested as a loan by the French Mobilier National, which thought it was a good idea to transform a piece of Baroque furniture! I design the jewelry myself, and work with a goldsmith and a silversmith. After presenting my creations at Fine Arts Paris, BRAFA and Masterpiece London, I am delighted to announce that I am taking part for the first time in Paris Design Week, in September. After 25 years in the business, and now that I’m 50, it is also important for me to express my creativity in different ways, not just work with my husband in the gallery.