The decorator was the talk of the town in Paris this September with his staging of the "Apotheosis of Genius" show at the Aveline gallery. We took this opportunity to talk to him about his career. 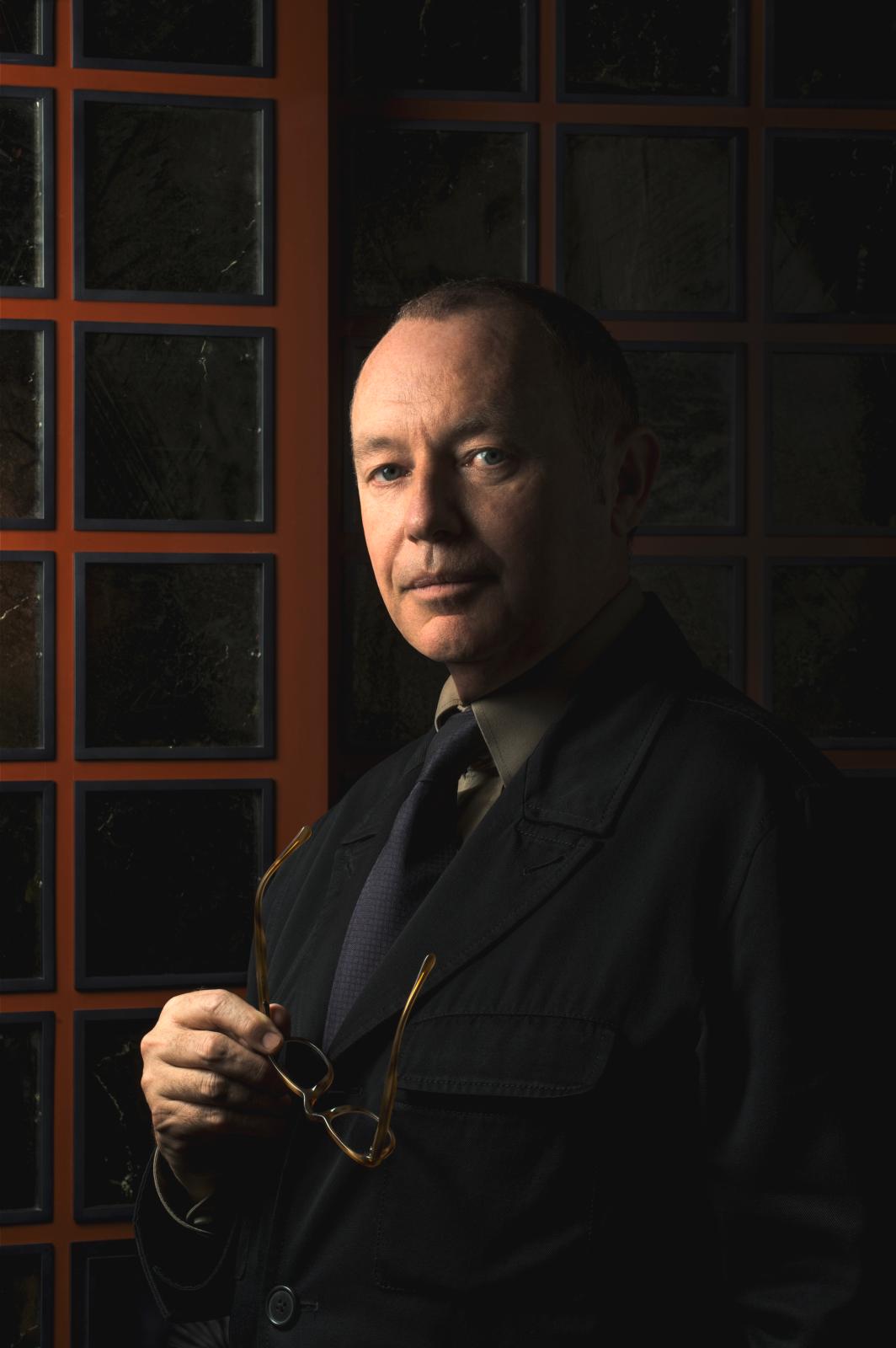 On the "Apotheosis of Genius" show’s opening night at the Aveline gallery, guests couldn’t believe their eyes: the vast space, including the mezzanine, had been turned into a suite of rooms covered in panelling and cordovan leather. The warm, cosy setting enhanced Volker Wurster and Achim Neuse’s collection of over 200 pieces of furniture and objects made for the universal exhibitions from 1851 to 1910. This brilliant stylistic exercise put the tight-lipped, acid-tongued decorator back into the spotlight.

How did this collaboration come about?
I had already designed two stands for the Aveline gallery at the Paris Biennial, so they thought of me. I went to Bremen to see the pieces and was totally bowled over: for 30 years, Volker Wurster and Achim Neuse have collected great 19th-century neo-Renaissance objects, amazing furniture designed for universal exhibitions boasting the highest quality craftsmanship of that time. To showcase it, I designed a setting with 3D prints: Cordovan leather, a carpet pattern from the Palazzo Pitti and half-length panelling seen at Marie-Hélène de Rothschild’s little house in Ferrières.

How is your career doing?
Everything’s going well, thanks. I’ve just moved my offices into a bigger space at 37 rue de l’Université. I’ve never had so many different clients. I’ve got around 10 projects underway, including a 3,000-square-metre house in Monaco, a worksite in London, one in Paris, two more in Athens, a castle next to Aix-en-Provence and I’m starting on a house on Ischia, which I’m going to design in a Carlo Ponti spirit.

Is that a new world for you?
Haven’t you seen the Plage Palace that I decorated for the Costes in Palavas? I chose the 60s-70s, with seats in varnished rosewood and very warm colours. That was at the same time as the Le Marigny restaurant in Paris, where I took inspiration from the 1940s, also with strong colours. In contrast, the hotel we’re starting together on Sloane Square in London will be completely Victorian and Edwardian, with Benson chandeliers and Mackintosh furniture. The London of people’s dreams!

Tell us about how you got started.
I opened my agency in 1986, when I was 30. My first client was on avenue Foch. Then, without any money, I decorated Carole Weisweiller’s house (her mother was Francine Weisweiller, a patron of the arts and friend of Cocteau’s). She said, “I’m taking you because you’re less expensive than Jacques Grange.” Then an antique dealer friend of mine introduced me to her German clients, who wanted to open a hotel in Avignon. That’s how the Mirande was born.

The Hotel de La Mirande was a tremendous media success. Is that when your career took off?
No, I’d say it was when I met Pierre Bergé at Carole’s. He asked me to decorate his apartment on rue Bonaparte in 1991. It took two years. I lowered the apartment and garden by 50 centimetres and opened up the courtyard to create an underground level. Then, in 2001-2002, I started working on the first floor.

Henry and Marie-Josée Kravis were also important for your career. How did you meet them?
Through Maurice Segoura. I went to see them in New York in 1996. They had just moved into their apartment. The sofas were still wrapped in plastic in the middle of Renoirs, Corots and 18th-century furniture. Henry Kravis asked me what I thought of his apartment. I said, "Do you want an honest answer or a fawning compliment?" "An honest answer." "It has to be redone." It took three years. We also put together a painting collection. They were interested in Matisse, Picasso and contemporary art. Over the years, they asked me to decorate eight houses and an airplane.

Did that bring you other American clients?
No, at that level you can’t share yourself.

"I’m more like an artisan, and when a client hires me, he is never dealing with a project manager. I design everything: the plans, the motifs, the materials … I really think I’m the only one to work like that!"

What are your clients’ nationalities?
Swiss, Greek, French and a sprinkling of Middle Easterners. They come back to me year after year. They change houses, boats and planes but they keep me.

Yet people say you’re hard to work with.
I have such a frightful reputation that it acts as a great screen. When people meet me, they know what they’re in for. But that cuts both ways. When somebody says, "He’s an impossible client!", I answer, "Send him to me!" It’s actually a sadomasochistic relationship.

Any regrets? The Ritz for example?
I met Al Fayed (editor’s note: the owner) but he had no idea what I was talking about. When I see what they’ve done to it! It’s a massacre unless you’re Chinese or blind. That cost €400 million? Where did all the money go? What’s very regrettable is that great hotels like the Ritz, the Plaza, the Meurice, the George V and the Crillon are part of our lives. We go there for breakfast, lunch and dinner. That’s over. Parisians don’t go to those redone hotels anymore.

You have a small team for around 10 projects. Have you ever wanted to grow, like Alberto Pinto or Peter Marino?
I have a deep admiration for large agencies like those of Peter or Linda and I would be entirely incapable of working the way they do. I’m more like an artisan, and when a client hires me, he is never dealing with a project manager. I design everything: the plans, the motifs, the materials … I really think I’m the only one to work like that!

Do you find furniture for your projects at Drouot?
I look at everything that happens at auctions. I go through La Gazette Drouot with a fine-toothed comb, but then I send somebody over. That’s not my job, I don’t know how to do it and it goes much too fast for me. I also buy a lot from dealers because they know where to find a particular object or piece of furniture, and I ask them to get it for me.