Whether they build up collections or host exhibitions, various luxury hotels are banking on contemporary art: a strategy aimed at a new connoisseur clientele. 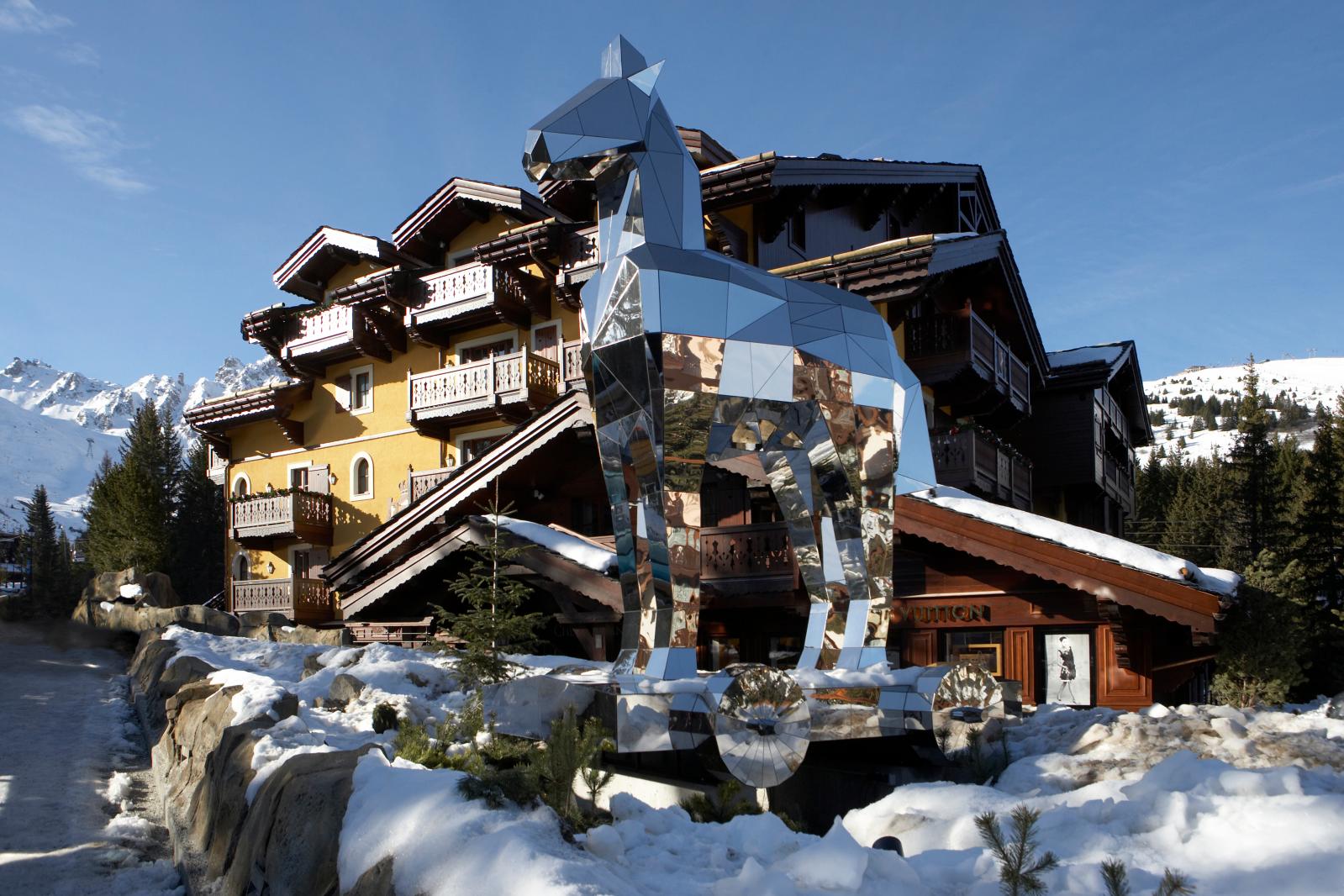 A monumental Trojan Horse by Bruno Peinado rises up at the entrance of LVMH's hotel Le Cheval Blanc, ensconced in the Courchevel resort. The ski slope side is dominated by Xavier Veilhan's Bear, while works by Andreas Gursky and Murakami can be seen inside. In Paris, the Peninsula hotel, owned by the eponymous Hong Kong group, welcomes visitors beneath a hanging crystal installation created by the Czech Lasvit workshops, with 800 leaves evoking the plane trees in Avenue Kleber. Further examples are found in other luxury hotels promoting the French lifestyle, which began to move into the contemporary art niche in the 2000s, capitalising on its growing popularity. "They have got in tune with the tastes of a new, young, wealthy, international clientele," says Nina Rodrigues-Ely, director of the contemporary art Observatory. And this aesthetic "extra", marking their identity, is now an argument designed to set them a cut above their competitors…  When a property owner is an art lover, everything happens naturally. In the 1990s, trailblazer Bernard Redolfi handed over the bedrooms of the Windsor Hotel in Nice to various visual artists: an approach continued by his niece, Odile. Guests can now sleep in the world of Ben, Raymond Hains and Mathieu Mercier. The same goes for Terre Blanche, a five-star resort deep in the Var region, which contains two golf courses and the constantly-expanding collection of German businessman Dietmar Hopp. Here 300 pieces are laid out at intervals between the lobby and the clubhouse, including sculptures by Niki de Saint Phalle and Antony Gormley.


Productive renovation
But the introduction of contemporary art often goes hand in hand with renovation work. It generally carries on a tradition – as with the Crillon. "In the past," says general manager Marc Raffray, "its successive owners always played the role of patrons, focusing on all the arts, including the applied arts." Before it reopened in 2017, the management called on two professionals for help: art advisor Fru Tholstrup and curator Jane Neal, who were tasked with bringing the visual artists together. Marc Raffray continues, "The idea was that every space (the communal areas, restaurants, bedrooms and suites) would contain unique, original pieces. We highlighted the work of well-known artists and young talents, with the intention of astounding our guests." Some pieces have been especially commissioned, like two large paintings by Laurent Grasso inspired by scenes by the Parrocel brothers (these face each other in the Salon des Batailles), or the colourful totem by Annie Morris inviting people to climb the stairway. Likewise at the Lutetia, which reopened in July 2018. The legendary Art Deco hotel on the Rive Gauche has been revamped by Jean-Michel Wilmotte. He has added a few contemporary touches, like a glass roof, transformed by French artist Fabrice Hyber (through the offices of his gallery owner Nathalie Obadia) into a colourful symphony full of zany characters (see photo). The building of the actual collection was entrusted to L’Atelier 27, a company founded by Joséphine Fossey and Florence Lipszyc, who cut their teeth with Christie’s. All in all, some 500 works and 900 decorative objects have been incorporated into the layout, "in the spirit of a collector's interior."

The gallery network
Some luxury hotels even host temporary exhibitions. This is what the Bristol has been doing since 2012, in partnership with various galleries. Under Kamel Mennour's leadership, Daniel Buren and Ugo Rondinone have occupied the garden, where sculptures by Lynn Chadwick of London's Blain/Southern gallery took up residence in turn during the summer. In September 2018, at the Crillon's request, Emmanuel Perrotin donned his "curator's hat" and took over the "Le Poète" Signature Suite, filling it with sculptures, paintings and photos by his artists, Murakami, Jean-Michel Othoniel and Sophie Calle. Meanwhile, the Peninsula began a collaboration with the Maeght gallery during the last FIAC. During the Chinese New Year in February, its director, Isabelle Maeght, will be presenting visual artists from the Land of the Rising Sun. At every venue, the pieces on show can be bought. "In the suite curated by Emmanuel Perrotin," says the Crillon's manager, "a work by Pieter Vermeersch was sold and immediately replaced. If customers are interested we tell the dealer, who then contacts them directly." Exhibiting in these remarkable places "means that we can attract collectors who wouldn't make a special trip but might well buy a work when they see it right in front of them," says Sidonie Gaychet, sales manager of the Polka gallery, which recently organised an event in the Paris hotel. In this landscape, the Meurice claims a special status. Since 2008, a prize has been awarded there each year by a jury of professionals. The finalists are exhibited for a fortnight in one of its saloons just before the FIAC, while the winner and his or her gallery share a prize of €20,000, in view of carrying out a project abroad.

A model overall concept
The arty-est of them all is the Royal Monceau, which reopened in 2010. Overseen by Philippe Starck, its renovation enabled the rollout of an overall concept: the only one of its kind. With help from art consultant Hervé Mikaeloff, a collection of 300 works was brought together through purchases and a few commissions, like the "Jardin de Paris" fresco executed by Stéphane Calais for the restaurant, and a strange "Trophy Room" dreamed up by Nikolay Polissky. It has also seen the arrival of a specialist bookshop and a gallery, which lays on an average of six exhibitions a year, with highly eclectic content. Installations are displayed at the same time in the lobby, like the one by Liu Bolin, champion of camouflage, just before Paris Photo. Meanwhile Julie Eugène is still performing the role of "art concierge" invented by Starck. The young woman, who previously worked in the Patricia Dorfmann gallery, acts as an adviser. "I devise personalised circuits in museums and galleries," she explains. "But I can also organise meetings with artists or gallery owners, help with acquisitions or even perform transactions for people who want to remain anonymous." In their own particular way, luxury hotels, as genuine international showcases, have become representatives in the art world and players in the market.