The destiny of three men converged on this iconic piece of Art Nouveau furniture: a unique work for the 1900 Universal Exhibition. The story is one of a rediscovery. 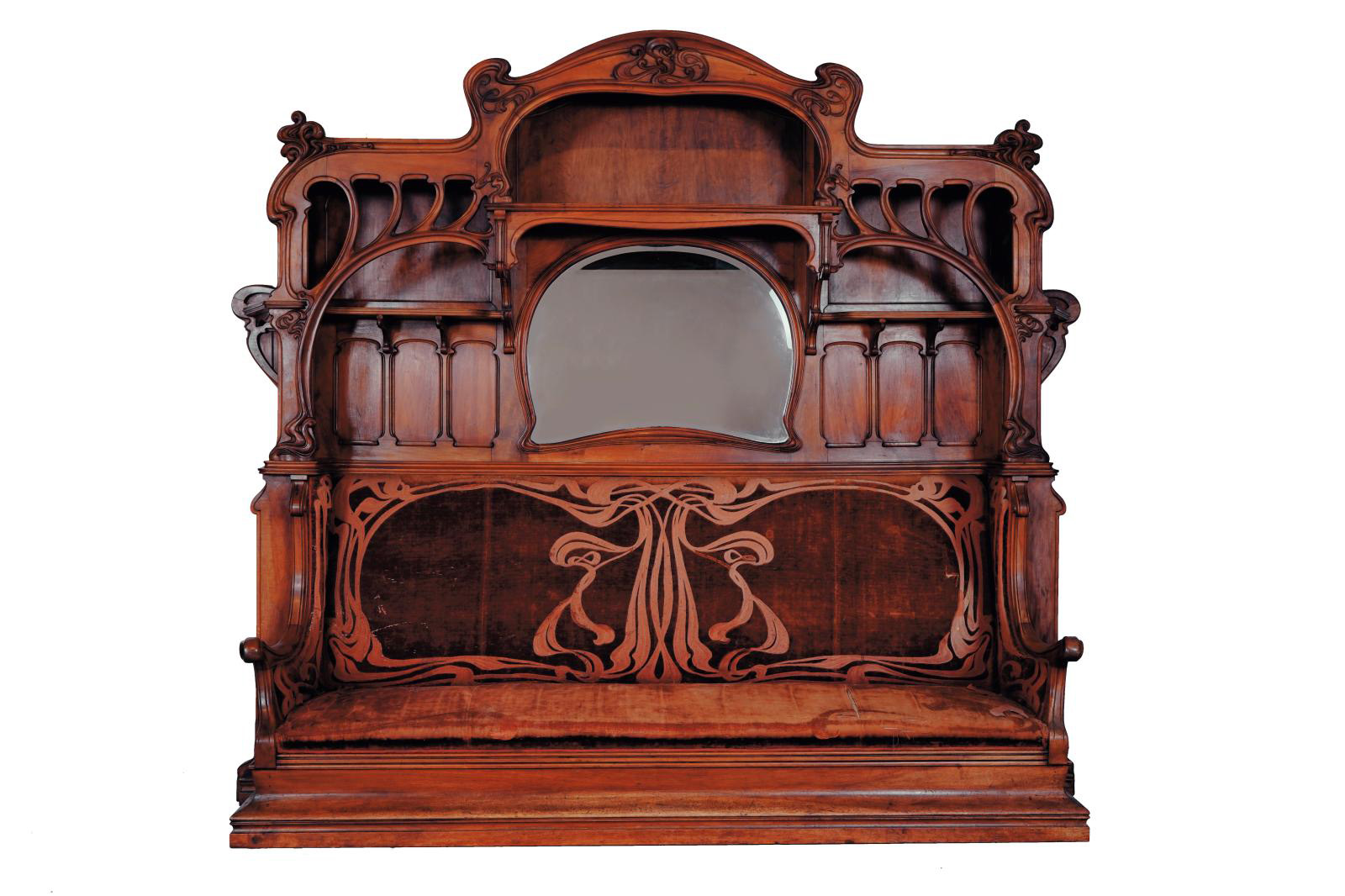 Long thought lost, it is now back in the spotlight over 120 years after causing a sensation at the 1900 Universal Exhibition. This bench by Eugène Gaillard, which appears in an archive photograph now in the Musée des Arts Décoratifs in Paris, was presented in the anteroom of the "Art Nouveau Bing" pavilion. It is thus a unique piece and a historic one at that, seen by over 50 million visitors in a France with barely more than 40 million inhabitants at the time.

An Ideal Nature
While many of Gaillard's furniture items for the dining room and bedroom of this pavilion are now in museums or have already been through the auction room, this was not the case with this bench. It was found in Limoges during an inventory in the apartment of the descendants of porcelain maker Émile Gérard (1848-1925). It had been sitting in a huge old billiard room that was almost unused because it was hard to heat, and had remained there ever since it was reassembled in 1900 after the Universal Exhibition. The bench is thus in excellent condition and is presented as it was at the time, with its original tapestry—in itself an extraordinary asset, enabling us to appreciate all the subtlety of the furniture's decoration.

Julie Fauré, who discovered it, says that "the central mirror forms the umbel of a jellyfish, whose tentacles are represented by the felt ornaments sewn to the velvet of the seat." This illustrates the ornamental repertory of Art Nouveau, which drew inspiration from nature and Japonism. Gaillard expressed it in a highly personal way, as we can see in his whiplash ornaments, carved in the round and in appliqué. These curves are undoubtedly phytomorphic, but they cannot be linked with a specific variety of plant, unlike the creations of other Art Nouveau artists like Emile Gallé or Louis Majorelle. Nature became the pretext for light, fluid ornamentation that was organic without being plant- or animal-based, and highly refined in comparison with certain creations of the period. With no other artifice, Gaillard used walnut—one of the most traditional woods—to express a refined style marked by lithe moldings with a dynamic energy heightened by interlacing.

Modernity According to Gaillard
Sobriety in Art Nouveau is the hallmark of this lawyer who became a furniture designer after studying at the Boulle School and the Paris School of Decorative Arts, and was chosen by Samuel Bing as the ambassador for his overall decorative program. Hired by the art dealer in 1897, Gaillard worked for him until 1903, alongside Georges de Feure and Edward Colonna. Gaillard focused primarily on form and line.  In his book published in 1906, À propos du mobilier (On Furniture), he said that he sought to "put undeniable art into even the humblest object or ordinary furniture [and] provide a wide range of prototypes full of beauty to the 'art' industries." The modernity of this approach, where artistic practices were blended and their hierarchy abolished to make beauty accessible to everyone, and adaptable to any type of interior, echoes the goal of Samuel Bing, who was keen to design interiors that synthesized aesthetic innovations and broke with classicism. This earned him a name that went down in history with the creation of his Maison de l'Art Nouveau in 1895. All the artists and interior designers working in Europe and North America hoped to place their creations with this gallery owner and informed collector, as their presence in his windows guaranteed success throughout the world.

Bing and Porcelain
Siegfried Bing also loved porcelain, which he came to know early on in his life, as his father's Hamburg-based company, Gebrüder Bing, imported French porcelain and glassware for sale in Germany. In 1863, over 30 years before the advent of Art Nouveau, the 25-year-old Bing joined forces with Jean-Baptiste Leuillier in Paris to produce rococo-style porcelain. This brought Bing his first success when their dinner service won a medal at the 1867 Universal Exhibition. Although the collaboration ended in 1881, his fondness for ceramics continued. In Limoges, Charles Field Haviland's factory attracted his attention. The fact that Haviland collected Japanese art, as he did (he had become interested in it during the mid-1870s), may have been a factor in this connection. This took shape in 1899, with his Maison de l'Art Nouveau, when de Feure and Colonna provided the designs for the pieces the gallery owner commissioned from the porcelain maker. The factory had meanwhile been renamed G.D.A. (Gérard, Dufraissex & Abbot). Émile Gérard turns up again here: the bench was discovered with his descendants. The "Canton" vases produced there won first prize at the Universal Exhibition of 1900, where they were probably exhibited in the "Art Nouveau Bing" pavilion, like the bench. So here we find Émile Gérard and Eugène Gaillard reunited. The rest is conjecture, as the archives of the porcelain maker's family shed no light on the furniture's arrival in Limoges after the exhibition was dismantled. Like the so-called "Canton" vase, which has entered the collections of New York's Metropolitan Museum, this bench is sure to interest museums in Europe and across the Atlantic.

The Collection of Marie Bell: A Woman of the French…

From the theater to illustrated plates, Marie Bell's life reflects…