For twenty years, Emmanuel Redon has been selling 19th- and 20th-century formal decorative silverware at the Marché Biron. More than a dealer, he has an open attitude to international markets and guides the taste of his clientele. 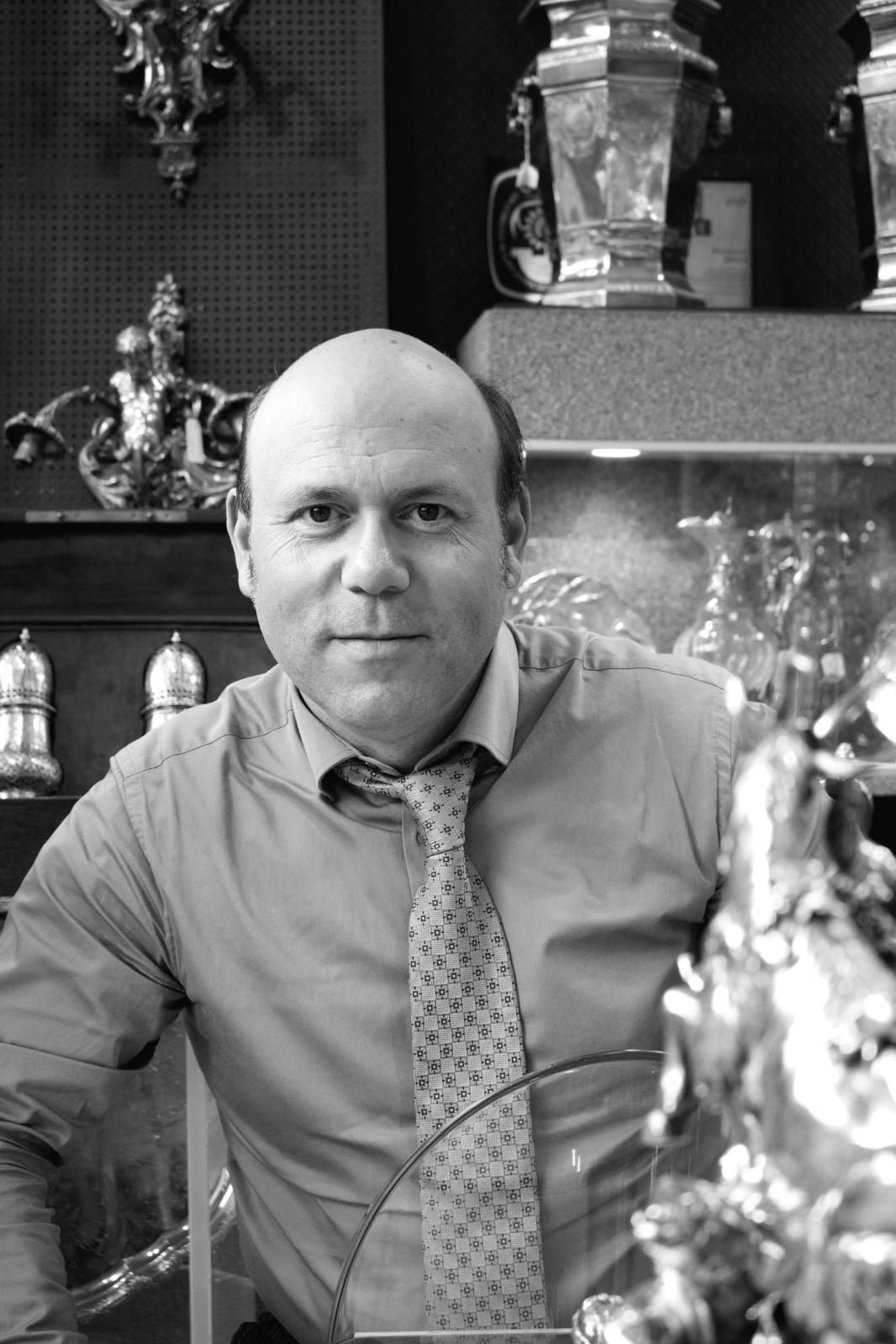 When he was 16, his mother Jacqueline Teboul, an antiques dealer specialising in Empire silverware at Village Suisse, wanted to bring him into the profession. But he refused. At the time, he preferred cinema and photography, and made a short film on the Viennese artist Egon Schiele. That was twenty years ago. Subsequently, he became interested in French silver, but in the sphere of formal decorative tableware. At the Marché Biron in the Saint-Ouen flea market, he has shared an 80 m² shop with his mother since 1999, where they welcome an international clientele in a rapidly changing sector. We talk to this incorrigible optimist.

What role do you play with your customers?
I try to give them advice and guide them in their purchases, explaining which piece to start with, and helping them to compose their tables – as I did two years ago with a Russian oligarch, whom I provided with cases of silverware by Odiot, Froment-Meurice and others. He had seen my stand at the Biennale. Buyers don't talk about their interiors, but their budgets. So I go along with them! Starting from the principle that all styles can be combined. People buy because they like a piece for itself, but my role is to explain why the silversmith is interesting and what amazing feats he has achieved.

Who are your buyers?
They mainly come from China, Japan and America. There aren't quite so many Russians, and potential French clients have gone into tax exile, with a few exceptions. I also have several Swiss collectors and customers from the Middle East, but export formalities make things far more difficult. And then there are the formalities currently being introduced by the Ministry of Finance and Tracfin, which means we will have to ask all our customers to fill in a questionnaire (we are waiting for the model), and then make a declaration online. Under the cloak of the Sapin act on money laundering and terrorism, we'll become informers! This brings back bad memories. There aren't many British customers because they have their own silver… Buyers are looking for typically French pieces with a pedigree. We are lucky in that the idea of the "French luxury brand" is transferred to our pieces. For example, if I sell a piece made by Puiforcat, I tell them that the company belongs to the Hermès group, and thus take advantage of the brand image.

You attend trade fairs, but you have never wanted to set up anywhere other than the flea market…
I have talked to leading antique dealers on the Left and Right Banks, and most of them say, "stay where you are". I took part in the Biennale des Antiquaires (now the Biennale Paris) in 2012, and again in 2014, with pieces that deserved to be seen there. I didn't want to attend in 2016 or this year, because I don't agree with the organisers' decision not to advertise, and there are too many conflicts of interest. I also believe that the setting should be refined and worthy of the event, and this has not been so for the past two years. In 2017, I was part of the vetting team. I have participated in TEFAF Maastricht for five years with a partner for several major pieces. The same customers visit the Biennale, Maastricht and my gallery in the flea market. My goal is to share pieces with customers, and put this highly creative silverware in its best light. It all takes time…

What changes have you seen in the market and profession over the past five years?
The market has opened up; the pickings can be shared throughout the world, and selling methods have completely changed. There are no more collectors; we now have the "nouveau riche", who have made money and want to be surrounded with beautiful antique objects. There are still real collectors for the 17th and 18th centuries, but there's no sign of a new generation of customers. We are in a sort of ice age, which looks set to continue for several more years. The dealers who come out best will be those who manage to keep their goods turning over, because they relish buying and selling. Meanwhile, the profession requires increasingly in-depth knowledge: knowledge about the objects you buy and sell, and above all knowledge of the market within and outside France. In short, it's essential to really know about the pieces themselves as well as their monetary value. My mother and I are the only people in the 19th- and 20th-century formal decorative silverware niche at the flea market, and probably in France. In fact, you always need to be on your toes intellectually and financially in terms of both buying and selling; rather than saying "I haven't got any money," you should take the initiative.

And yet silverware is not known as a growth market…
19th-century silver is seen as tableware, and thus functional. Unlike 18th-century silver, it appeals to those who love decoration, rather than to collectors. As a result, customers are not willing to pay as much as they would for a painting, for example. What I try to explain is that these really are collectors' items, even if they are functional…

Do you feel that the market is tougher than it was ten years ago?
Very much so. Today, the job is constantly present. With the Internet, you can work anywhere in the world, at all hours. You need to make the most of every moment and take your time in this line of business. You can believe you are relatively free, while in fact being captive of your desires.

When you talk about the pieces you sell, you give the impression they are your own collection.
In a way, they are! My approach is based on proposing and selling my own taste. The day I finish with it all, I'll sell everything. That's what Félix Marcilhac did. What's important is not to own the most beautiful pieces, but to appropriate the ones that pass through your hands …