Though his name crops up regularly in auction sales (often preceded by the words “attributed to”), the French architect and interior designer Georges Bourgeois (1898–1937), who practiced under the sobriquet Djo-Bourgeois, is little known outside of specialist circles. 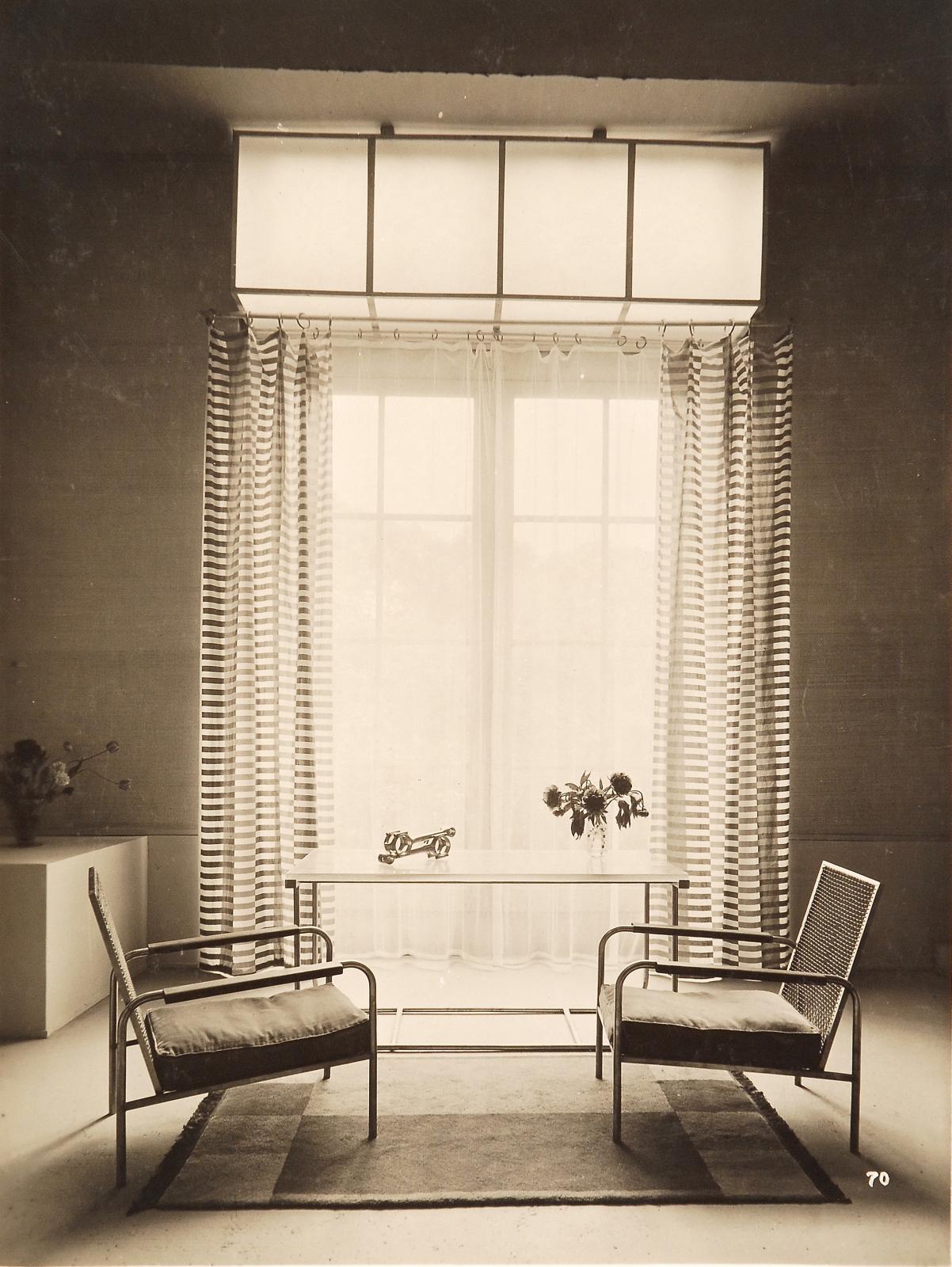 Yet during his brief career —barely 15 years— he was hailed as a rising star of contemporary design, one of the “moderns” alongside Charlotte Perriand, René Herbst, Pierre Chareau and Robert Mallet-Stevens, all of whom sought to free the 20th-century dwelling from the dark clutter of the Victorian age. His relative obscurity today is due in part to the brevity of his career, but also to the disappearance of nearly all his ensembles and built works, as well as to a complete absence of archives, apart from two collections of photographs and gouaches held at the Forney and Kandinsky Libraries in Paris. Indeed these images (many of which have just been published for the first time in book form by Les Éditions du Regard, in a volume titled simply Djo-Bourgeois), along with the rare pieces of furniture that can definitely be attributed to him, are all that now remain of a sophisticated body of work that deserves wider recognition.

A Beginning
Born in Bezons, just outside Paris, Bourgeois began attending the École Spéciale d’Architecture (ESA) in the fall of 1914, at the age of just 16. Though the school remained open during World War I and he was too young to be drafted, he chose to join the war effort at the end of his first year, serving as an engineer in the French air force; as a result, he would only finally graduate in October 1922. For reasons that have not been recorded—though a desire for independence was no doubt among them—he eschewed work in an architecture office, instead going it alone, practicing essentially as an interior designer or “ensemblier,” as they were known at that time. Two weeks after graduating, aged just 24, he was already exhibiting at Paris’s Salon d’Automne, and, at the invitation of another ESA alumnus, Robert Mallet-Stevens, 12 years his senior, took part in the Salon des Artistes Décorateurs in May of 1923—the first time he signed his work Djo-Bourgeois (a far more distinctive moniker than the rather common name on his birth certificate). He would continue to exhibit at the Salon d’Automne and the Salon des Artistes Décorateurs for most of the rest of his career, and between 1923 and 1925 showed work not only under his own name but also for the Studium Louvre—the design brand of the department store Les Grands Magasins du Louvre—whose team he had been invited to join. Mallet-Stevens proved instrumental in his career a second time when, in 1924, he found him his first important private client in the Vicomte de Noailles, whose villa in Hyères the older architect had begun working on in 1923. Over the next four years, Djo-Bourgeois would design the dining room, the children’s dining room, some of the bedrooms, and an extraordinary bar in the main reception area, which anticipated Pop Art in its use of color and advertising logos.

Towards a Total Work of Art
In 1925 Djo-Bourgeois married Élise George, an artist who henceforth would work hand in hand with her husband under the name Élise Djo-Bourgeois, designing all the textiles—curtains, rugs, upholstery—for his many interiors. Among the first commissions they tackled together was the Villa Lahy at Saint-Clair in Le Lavandou in the south of France (1925–27), the only chance Djo-Bourgeois ever had to realize a total work of art where he was both architect and interior designer (his surviving photographic portfolio includes several models for proposed houses, but none ever came to fruition). He was not yet 30 when the villa was completed, and there is still a certain naiveté, an ungainliness in the handling of the architectural composition and some of the furniture, that marks this as an œuvre de jeunesse (a youthful work). But there is also a sophisticated use of a multi-level Raumplan (a spatial plan developed by Adolph Loos (1870-1933) and, in the bedrooms, of built-in furnishings that serve to sculpt the space. Moreover, as the gouaches make clear, the Villa Lahy featured a brand-new aspect to Djo-Bourgeois’s interior design: color, a contribution brought by Élise that further sculpted the perception of space and which would play a central role in their subsequent work.

A Modernist Vision
A year after the villa’s completion the Djo-Bourgeois partnership made the leap to the sophisticated maturity that would characterize the rest of their brief career. For the Salon des Artistes Décorateurs of 1928, the now 30-year-old Djo-Bourgeois (Élise was four years his senior) teamed up with 24-year-old Charlotte Perriand and 37-year-old René Herbst to present a joint project: a four-room model apartment. Perriand designed the dining room, Herbst the smoking room, while Djo-Bourgeois took the lion’s share with the living room and the kitchen. Gone were the dark waxed mahogany of the Lahys’ and the Noailles’ dining rooms, replaced by the modernity of luminescent glass and nickeled tubular steel, complemented by Élise’s joyously geometric fabrics. In the words of Perriand, the “unité de choc” formed by the quartet “brought in a new air—unknown at the Salon des Décorateurs—of fresh creativity and openness to new techniques. It got the press in a tizzy, all of them favorable to our initiative, except for a few grouches.”

Curious Choices
There followed two decisions that seem surprising given the course of Djo-Bourgeois’s career to date. Firstly, like Mallet-Stevens, his name was listed among those scheduled to take part in the mythic first meeting of the Congrès internationaux de l’architecture modern (CIAM, the International Congress of Modern Architecture) in June of 1928; but, like Mallet-Stevens, he chose not to go—why, we shall probably never know, although workload may have been a factor. Yet more curious was his reaction to the scission caused by the unité de choc of which he was part, a querelle des anciens et des modernes (quarrel between the old and the new) with the Salon des Artistes Décorateurs that would lead to the formation of a breakaway group, officialized as the Union des Artistes Modernes (UAM, Union of Modern Artists) in 1929. Though he initially resigned from the Salon des Artistes Décorateurs, Djo-Bourgeois refused to join UAM, eventually returning to the Artistes Décorateurs and exhibiting there and at the Salon d’Automne just as before. After this point, his and Élise’s work would display what, from the vantage point of today, seems a rather tempered modernity that perhaps chimed with more than it challenged the post-1929-crash times. As the historian Stéphane Boudin-Lestienne puts it, “Admired by the young generation of 1930s decorators such as Jean Royère, the Djo-Bourgeois appeared above all as pragmatists who sought simplicity, as opposed to troublemakers in search of a militant modernity. While they had long been close to the avant-garde, they did not formulate an ideological position with respect to a political or social utopia. Their reputation has suffered from this measured radicality, but that does not mean that they did not propose real innovations in terms of typology and functionality.”

A Denouement
A perfect example of their streamlined 1930s approach can be found in the last ever ensemble they exhibited, a “yachtsman’s apartment” at Paris’s 1937 Exposition internationale des arts et techniques (International Exposition of Art and Technology). Indeed Djo-Bourgeois would not live to see the installation finished, he was struck down by a sudden illness two months before the exhibition opened. In the yachtsman’s bedroom and living room, which were posthumously completed by friends and colleagues, everything appears light, simple, practical, and luminous, belying the sophistication required to achieve it. How far might the couple have gone given just a few more years? We shall never know, for Élise, occupied with their troubled son, ceased all professional activity on her husband’s death, while war, the passing of time, and changing fashions saw to it that their names sank into ever deeper obscurity. Today the subject of renewed interest, they are yet another example of the lost history of Modernism, a subplot in the story that did not make it into the simplified “official” narrative.