Leading Goodman Gallery’s first US venture in East Hampton, New York, Denis Gardarin gives us an insight into his rich career, passion for working with artists, and creating gender parity in the commercial art world. 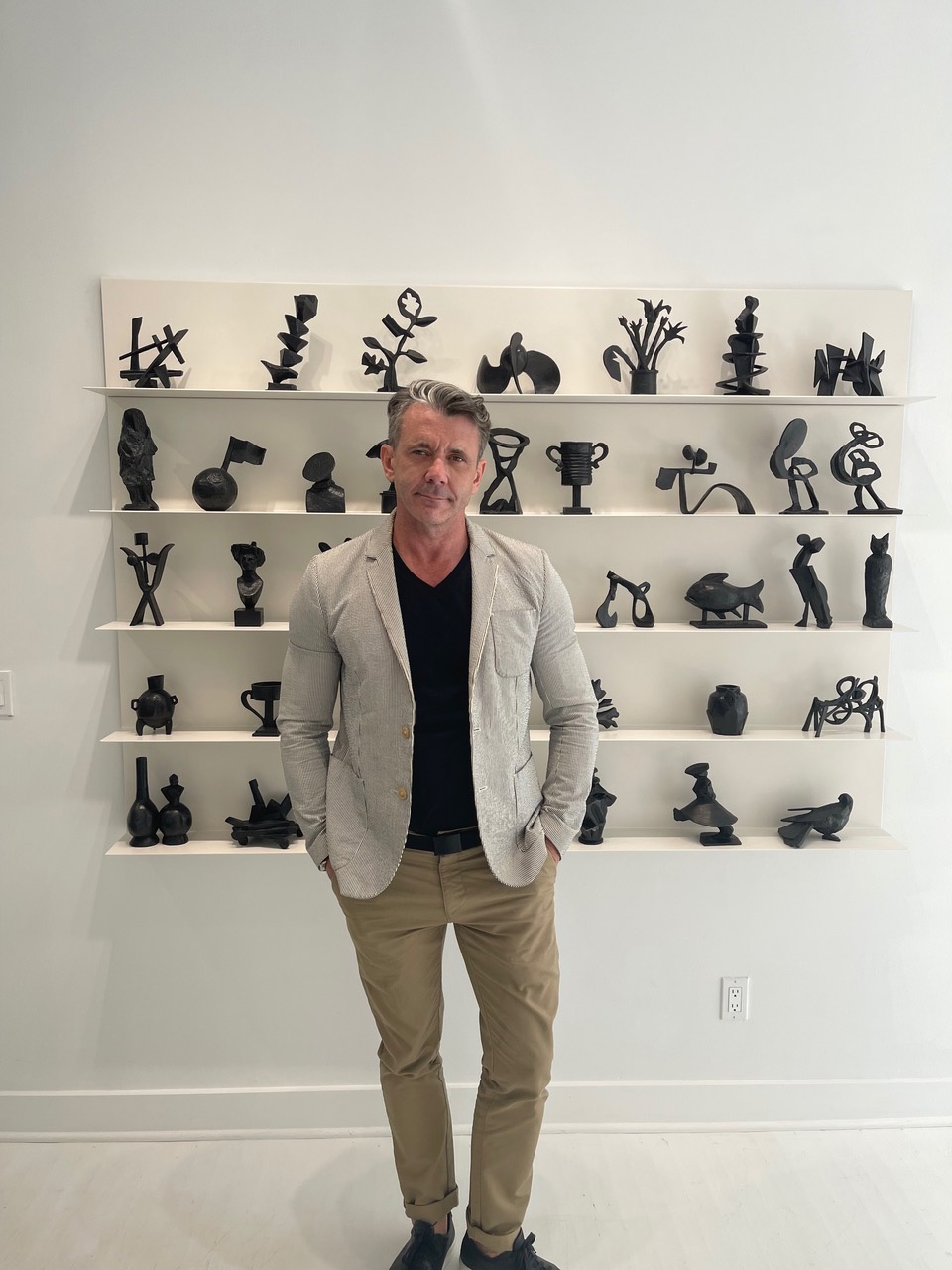 Could we start by hearing more about your journey in the arts?
I received a Masters in Fine Arts at La Sorbonne and started collecting at 18: a Karel Appel lithograph which I still own. I realized quickly that I wasn’t going to be an artist, and I moved to the United States to study at UCLA.
In LA, I met Tim Wright and Robert Sobieszek, heads of the Photography Department at LACMA, where I was worked on cataloging the collection. At the end of this internship, I co-curated an exhibition with Robert at the museum. After that, I worked at Couturier Gallery for 3 years, familiarizing myself with Latin American Art.  But I always gravitated toward the East Coast so I moved to New York, where my first interview landed me a job with Brent Sikkema, managing all the photographers in his stable.
At my first Armory Show in 2001 I was introduced to a culture of collecting that was revolutionary. People you never met and who didn’t necessarily know your artists, gave you an opportunity to sell to them: it was collecting as a way of life. I stayed with Brent for three and a half years. In 2003, Sean Kelly hired me to manage the Robert Mapplethorpe Foundation and I worked with Cindy Sherman, starting a series of artists curating Mapplethorpe. The eight years I spent with Kelly were extremely formative, which led me to White Cube in London. I moved back to New York in 2013 and launched Tierney Gardarin. Our program was contemporary and Brazil-focused. Following this, I opened my own presentation concept: an itinerant program in historic locations, and in 2017 I joined Liza Essers to lead Goodman’s art fairs and help set up the new London gallery. We teamed up again this year for Frieze NY and the temporary gallery in East Hampton for this summer.

Why were you so focused on Brazil?
I am passionate about and collect Brazilian art, having worked with Vik Muniz and Jac Leirner, and gaining perspective through the eyes and mind of my friend and artist, Iran do Espírito Santo. This allowed me to work with Janaina Tschäpe (who was represented by Brent and now works with Sean Kelly) and the estate of Geraldo de Barros, and to co-curate an exhibition with Jacopo Visconti (curator of the 2021 Sao Paulo Biennial).

You’re running the first Goodman Gallery in the US, could you talk a little about the vision for the first six months?
In London, I advised Goodman on how they could maximize visibility for the gallery and their artists, and that's what I'm doing here. I know their modus operandi and admire their artists. The Hamptons is a platform to connect a new audience with our artists.  We participated in Frieze before opening, which was an incredible experience because it was the first post-COVID art fair. Sales were strong, and it was wonderful to re-engage in person with the art and the collectors again.

Goodman’s London space feels more museum like, are you trying to do something similar in East Hampton?
Yes, the Hamptons space is intimate and we think of it as a place of discovery.  Over the course of 16 weeks, we’re presenting eight solo exhibitions. Six of these artists have never been shown in the US before, and four of them are women. It exposes us to the diversity of the Hamptons collector base, expanding our reach and developing relationships with other galleries and museums.

Will Goodman open a space in Manhattan? Do you think that the migration of collectors from Manhattan to the Hamptons will continue?
It will depend on a number of factors. As the world and the art market are rapidly changing, so we as gallerists are becoming more flexible. This summer audience might be here through the fall and winter, but Hamptonians are also New Yorkers. We're keeping our options open and investigating the possibilities of pop-ups in other cities including Miami (where we collaborated with Marianne Boesky last winter) or Palm Beach.
This upcoming season, we had slated a collaboration with Adler Beatty, so I proposed a series of exhibitions curated by women artists. I think it’s important to keep enhancing the agency of women artists and centering their perspectives. The success of our expansion depends on the quality of our program, while remaining true to our mission, and this is part of that.

What are your most memorable artist relationships and projects?
I like the idea of contributing to helping artists chart new paths in their careers. I met the Austrian artist Rudolf Polanszky in 2014 and presented his first solo exhibition in New York in 2015. It’s given me great satisfaction that he has gone on to be represented by Gagosian, which first showed his work in New York in 2020.
The project I am proudest of is “Stranger - the Museum Edition”, which I co-produced with the performance and installation artist, Naama Tsabar, in 2016. It’s since been performed at the Garage in Miami, the Palais de Tokyo in Paris, The Tamayo Museum in Mexico City, at Frieze LA as a solo project, the Andy Warhol Museum in Pittsburgh, and soon with the Goodman Gallery in London. As important as it was to help develop her career, creating this work with Naama was a meaningful dialogue and collaboration.

Could you tell me a little about your work with Camille Morineau and her organization AWARE?
I met Camille Morineau in London during a panel discussion in 2018. After Camille curated “elles” at Pompidou, she founded Archives for Women Artists Research and Exhibitions (AWARE).) I proposed the idea that she should curate an exhibition in Paris, with only female artists. Inspired by the Pompidou exhibit, “Elles font Paris” is a month-long program in which she will select shows and organize events throughout Paris galleries, focusing exclusively on women. Meeting with Camille has spurred me to develop similar projects in New York, Los Angeles and Chicago, to benefit organizations that champion women artists.
Similarly, working with Liza Essers has been extremely inspiring: she has transformed the status quo by advocating for and presenting women artists since she took over Goodman in 2008.
Both Camille and Liza have motivated me to start developing—Men for Women in the Arts—an organization, where men take an active role in supporting and promoting gender parity in art and society.

You mentioned, the first work you bought was a Karel Appel, what do you collect now?
It’s diverse, but I began by collecting photography: I was a photographer, my dad was a Sunday photographer, and at LACMA I learned more about the technical aspects of photography. But I’ve also purchased Louise Bourgeois, John Baldessari, a Robert Smithson drawing from 1970, as well as all the artists I worked with including Valérie Belin, Cerith Wyn Evans, Laurent Grasso, Kris Martin and Janaina Tschäpe, to name a few. Collecting is connecting, and an essential part of being in the business; it allows me to share my passion with collectors. There is a transaction, yes, but it is also a way to communicate passion.

If you were to choose to buy one artist of the gallery, who would it be?
I've always been classical in my tastes, and out of our roster of artists, I respond most to William Kentridge. His depth of knowledge, his passion for classical music and opera, films, theater, books, art history and philosophy, make him a renaissance man and a humanist. If I were going to acquire only one artist, it would be his work, because of the interconnectivity between art and life, but there are many others that are on my wish list.