In his studio in Sète the 79-year-old French artist, a founding member of the Supports/Surfaces group, looks back on his complex career and a philosophy that endlessly questions painting and its future. 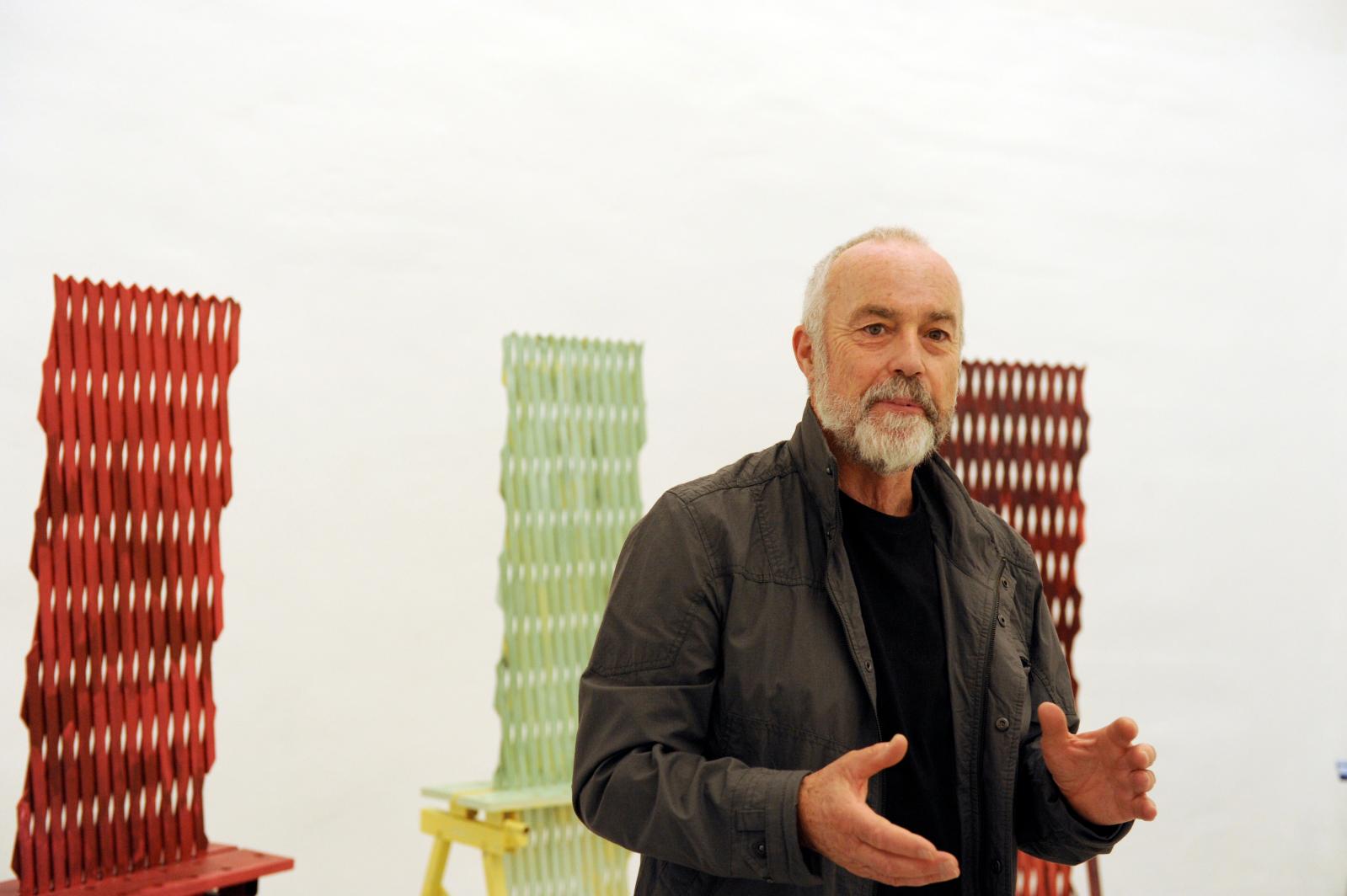 Meeting Daniel Dezeuze is rather like having a date with the history of art. We are talking of the 1970-1972 period, when the artist from Alès, who moved to Sète (southern France) in 1978, worked in Paris with Claude Viallat and Patrick Saytour, among other colleagues, in shaping the Supports/Surfaces movement. A short way from Pierre Soulages' studio-house on Mont Saint-Clair, his home with its splendid Mediterranean garden commands a dizzying view of the sea. Below, his studio lies hidden in greenery. The eternally elegant artist takes up his position here each morning according to a time-honored ritual. "I stop work in the late morning, then come back in the late afternoon and look back at what I've done to see how I'm going to carry on the next day. I usually create alone, but two mornings a week my assistant—an artist from Sète—comes to help me, especially when I'm working on large pieces. "

On the walls, small works tell the story of his artistic journey, based largely on the use of "poor", somewhat fragile materials like veneering wood, expandable trellises, racks, bamboo or wicker fencing and formwork blocks. The artist rolls a narrow bamboo "ladder" down to the floor, next to a "calligraphy" of ski tips. Near the entrance is a painting made up of set squares and colored pieces of wood. "From mankind's very beginning," he says, "the hand has made and the eye has evolved. I never stop creating, cutting wood, screwing it and assembling it. Any object or recovered material can have a real artistic destiny. There are constant surprises." He adds: "In fact, I very quickly avoided canvas, and if I sometimes use fiberglass or gauze, I cut it, I empty it."

In 1967, Dezeuze caused some astonishment with his Châssis avec feuille de plastique tendue (Frame with Stretched Plastic Sheet), which, according to the precepts of the Supports/Surfaces movement, "laid bare the pictorial elements"—in this case, the stretcher. "I have always been interested in the question of painting," he says. "At that time, I demystified it by stretching a plastic film over the stretcher and placing it on the floor, against a wall. The other members of the group and I wanted to show what was "repressed", invisible. We wanted to make a clean sweep of the past and explore a new kind of painting based on different materialist foundations. It was a total utopia." A fundamental idea that still seems to haunt him. On the door, phrases scribbled in pencil, like trenchant formulas expressing his eternal questions, can be read between photographs and philosophical quotations: "Profusion of screens, the persistence of the painting... What about screens, paintings? Memoires of an old 'screenophobe'."

Joyous chance encounters
On trestles, spatulas, drill bits and hammers rub shoulders with other tools of this great "DIY" artist. A few pots of colored crayons stand on a small desk. But where are the drawings that have been part of his corpus since his early days? "In boxes. If I decide just to draw, I arrange my studio accordingly. For one or two weeks, I'll devote myself entirely to drawing. It's a more gestural, spontaneous practice than the work with materials involved in my pictures." Giving rise to pieces with multiple typologies—ladders, containers, harvest objects, handguns, crossbows, old boats, "paints that bead"—, his output, punctuated by series and breaks with form, is mostly dictated by chance: "People often say that my painting is systematic, framed by theory. But that's not true: my work is really guided by chance encounters with a material or a color, like a board found in the street or skis abandoned by a neighbor. When I was living near the Bastille in Paris, between 1967 and 1972, I was interested in the dyes used by furniture manufacturers. At the time I used varnishes, wood stains, walnut stains and drugstore blacks. I am very sensitive to my surroundings."

Dezeuze has known and been through many environments and countries. At 20, he was in Spain, where he drew and painted, and managed an Alliance Française language center. In 1964, he was in Mexico, then he went to Canada, where he did his military service as an overseas volunteer. All these countries and others, like the USA, China and Japan, have helped to form his globe-trotting artistic spirit, open to not only the major contemporary art movements outside Europe but also the cultures of other climes.

An anthropologist of painting
His "harvest objects" and "containers" from between 1992 and 1995 revisit the artisanal practices of "peoples of a nomadic culture, without architecture," to quote what he said to the former curator Henry-Claude Cousseau. These makeshift constructions also reveal a "nostalgia for a rural world in difficulties, reaching out to a society eager to return to nature," says Sophie Bernard, curator of the Musée de Grenoble. "All human activities interest me; I am an inquisitive soul who likes to compare civilizations," says the artist, who also has a doctorate in comparative literature. "It's a legacy from structuralist thinking. In fact, my work evokes the three worlds of our societies. The rural world of producers and workers, through my objects; the military world through my handguns and drawings of fortresses, and the religious world, through my drawings and "heretical" writings linked with ancient religions."

At heart an ethno-anthropologist of painting, also inspired by Daoist thought, Dezeuze is aware that he can destabilize the public with his highly diverse approach. "As I often go from one thing to another, the viewer can feel lost. Nonetheless, I like to move forward in this way, because I'm constantly fascinated by everything that human societies succeed in producing." Today, this former teacher (who taught at the Villa Arson in Nice, the Arts Décoratifs in Bourges and the Beaux-Arts in Montpellier) still has questions, faced with society's dazzling evolution. "I am unable to grasp it, though I physically experienced previous developments through my objects and paintings. My initial questioning is still relevant, but it lies in a different context: the future of the painting. Our society, inundated by images, has produced lazier hands that are constantly typing on a keyboard. So our visual approach to the world is different. For my part, I want to preserve a traditional, tactile relationship between my hand and eye."

Though the third lockdown has shifted his exhibition at the Templon Gallery (Paris) to the fall, the artist is serenely happy to wait things out. "I would have liked to exhibit in the spring, as planned, to start a new series. An exhibition always gives me an overview of what I have done, so I can move on to something else. But I'm still imbued with creative energy!"