Annie and Jean Dalsace are famous for commissioning their extraordinary Maison de Verre (Glass House) from architect Pierre Chareau (1883-1950). A book by their grandson reveals their close bonds and shared passion for the artists of their time. 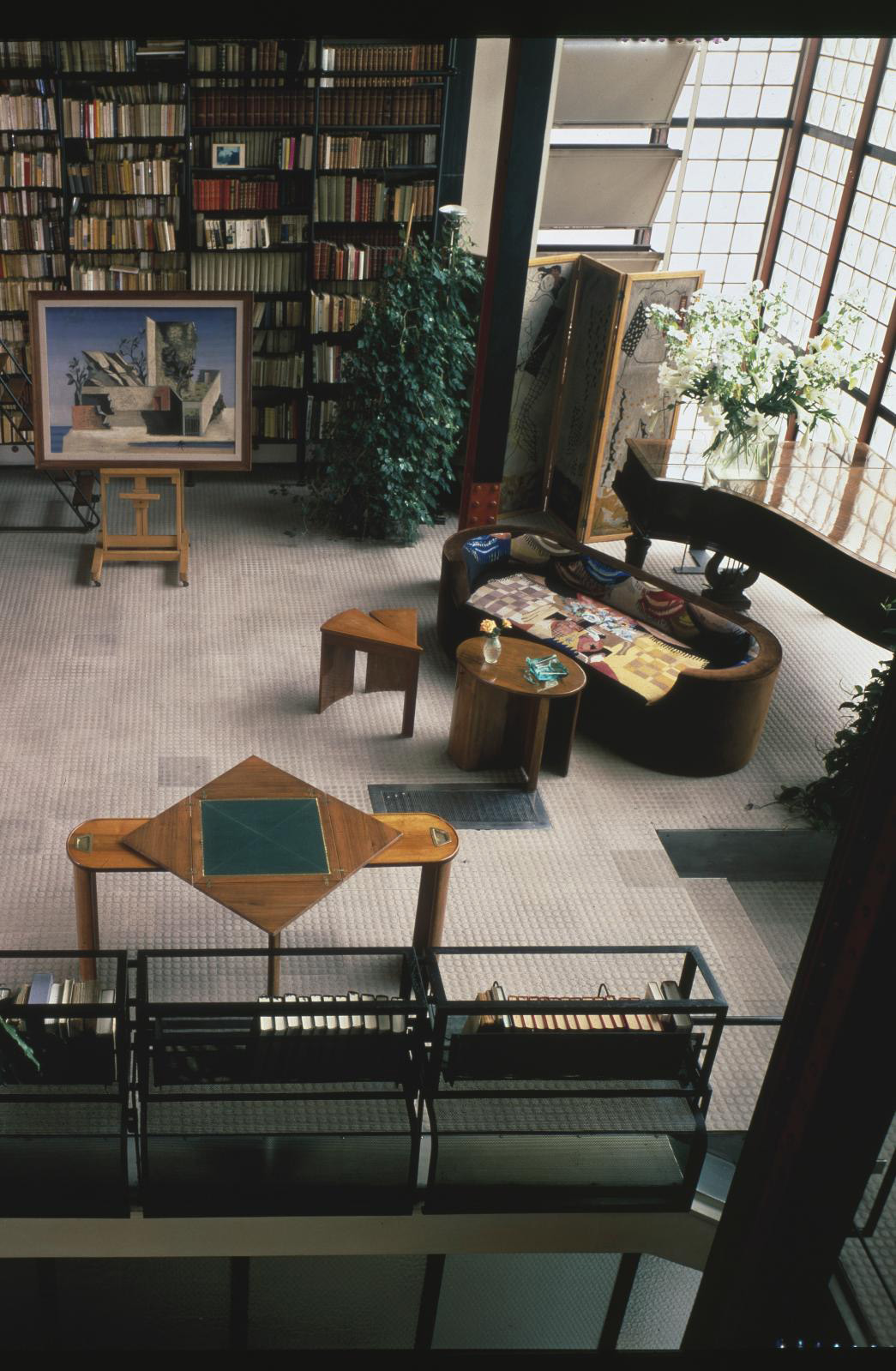 In the 1920s, you needed great openness to the avant-garde to build a modernist house with a glass façade set among 18th-century buildings in the heart of the Faubourg Saint-Germain! Annie and Jean Dalsace were even more daring in that they gave this legendary project to Pierre Chareau: an interior designer, and not even an architect. "This adventure arose from the friendship between two couples, the Chareaus and the Dalsaces," says Marc Vellay, the latters' grandson. Although he had already published a book on the Maison de Verre in 1983 with the Editions du Regard, he has continued to explore the family archives, photographs, account books and private letters, and now looks back on the affectionate ties between the clients, the designer and his wife. Through "comparative portraits", he evokes the painters, writers and musicians held in high regard by all the heroes of this adventure. So who were these bold clients?

She, Anna (or Annie), née Bernheim, came from a Jewish family that made a fortune in real estate development. The graceful young girl took piano lessons, and at the same time posed for the subtle portrait painter Jacques-Émile Blanche. Her tutor at home was an Englishwoman, Louisa Dyte, known as Dollie, who was none other than Pierre Chareau's beloved wife. They became close friends. Jean Dalsace also belonged to the Jewish community in eastern France. He grew up in Épinal, where his father was a tax inspector. This doctor by calling, who specialized in gynecology, spent his career trying to cure sterility while campaigning for contraception and family planning. An intellectual and a member of the Socialist Party, he was fascinated by psychoanalysis. He was also handsome, and played the cello. Jean and Annie met at a wedding. They were married in 1918, during one of his leaves of absence, as he was still mobilized as a nurse in the French army. A year later, they moved to 195 Boulevard Saint-Germain on the Left Bank in Paris. Here they sought out Pierre Chareau, who had recently set up his own business after working as a designer for the furniture manufacturer Waring & Gillow. He designed the entrance and master bedroom of the apartment and chose a Macassar ebony furniture suite for the "young doctor's office".

Maria Austria (1915-1975), Annie and Jean Dalsace in the small blue salon of the Maison de Verre in around 1950 (on the wall: Max Ernst and André Bauchant).
Courtesy of François Halard

The Intrepid Pierre Chareau
After that, Chareau designed several projects for the Bernheims, including their family property in Noisy-le-Grand, and the clubhouse of the Beauvallon Golf Hotel on the Côte d'Azur. In 1927, Annie and Jean Dalsace gave him the opportunity to design his masterpiece: the famous Maison de Verre. They had acquired a plot of land and a small building at the back of the courtyard at 31 Rue Saint-Guillaume, which they wanted to demolish and replace with a boldly contemporary residence. The tenant occupying the top floor under the roof of the private mansion could not be moved out, but no matter:  Pierre Chareau kept the upper part of the building, which he placed on stilts, hollowed out the levels below and inserted the new construction. A tremendous feat! He introduced highly innovative materials into the project: glass bricks to clad the façades, perforated metal and rubber flooring. The building work lasted four years, from 1928 to 1932. Funding from Annie's father was obviously very welcome! Pierre Chareau, in partnership with the Dutch architect Bernard Bijvoët, devoted himself to the project full time. The owner, a determined character, visited the site almost every day. Meanwhile, the metalworker Louis Dalbet, a brilliant ironworker, set up a workshop on the spot to make cupboards, doors and staircases, among other things.

On the courtyard side, the glass brick-paved façade is illuminated at night by spotlights.
Courtesy of Marc Vellay

The house needed to cater for not only the family life of the Dalsaces, with reception and service rooms, but also the doctor's surgery and consultation room, and the secretary's office. Another challenge. A subtle sliding glass door separated the living area from the professional space. In this interior, everything was mobile! Partitions swiveled to become cupboards, and the stairway connecting Annie's boudoir and her bedroom was retractable. The furniture designed by Chareau, in precious wood, metal or both, could be transformed, folded or unfolded as needed. The designer had a marvelous time inventing all these mechanisms. This building is "an ingenious toy", wrote an editor of L'Architecture d'aujourd'hui  (Architecture Today) in 1933. By chance, several reports were done on this legendary place very early on. We see it alive, bathed in light, with its exceptionally high-ceilinged living room, bow windows and terrace overlooking a garden. At the foot of the monumental staircase, which seemed to float like a ladder, visitors were greeted by a portrait of Annie Dalsace by Jean Lurçat—an artist from Lorraine, like the gynecologist. The two Jeans, classmates, had known each other from childhood. They met again at the front in 1915 and remained firm friends afterward. Lurçat was always penniless, but the good doctor Dalsace was ever ready to help him out. The painter soon found a new form of expression, tapestry, and was represented in Pierre Chareau's "La Boutique" at 3 Rue du Cherche-Midi.  The shop sold Lurçat's carpets and edited the wallpapers he designed. Sofas and armchairs covered with the artist's colorful tapestries brightened up the interior of the Maison de Verre. Lurçat also introduced a Swiss friend to the Dalsaces: Jeanne Bucher, who fervently championed the avant-gardes of her time. Although she worked for a time above "La Boutique", the gallery owner and art publisher opened her own space in the building next door, at number 5 in the same street, with financial support from Dr. Dalsace.

Jean Lurçat (1892-1966), portrait of Annie Dalsace, oil on canvas, 1922. This greeted visitors at the foot of the main staircase in the Maison de Verre. Rights reserved

Collectors and Music Lovers
The "Jeannies", as they were called by their friends and family (a contraction of Jean and Annie) attended her exhibitions assiduously, for they were collectors, and particularly taken with Cubism. "They lived with their works of art," says Marc Vellay. The interior was filled with sculptures by Lipchitz, including portraits of Annie, paper collages by Braque and Picasso, drawings by Gris, as well as paintings by the naîve artist Bauchant, Chirico and Ernst. The latter joined their circle of friends, and Annie asked him to design her ex-libris. She was a literary enthusiast, as witnessed by the spectacular library in Rue Saint-Guillaume, built on two levels. It contained exhibition catalogs, art magazines and literary texts bound by the talented and marvelous Rose Adler, who, like Pierre Chareau, joined the UAM (Union of Modern Artists). The shelves also groaned with music scores. Music was another of Annie's passions—the Dalsaces in fact helped to finance the Salle Pleyel in Paris, where they had their own seats from its inauguration in 1928. The composer Darius Milhaud and his wife Madeleine were among their close friends. "There was a special place, the little blue room, for listening to music, where the phonograph, then the record player and finally the stereo system were installed," says Marc Vellay, visibly moved. Sadly, everything fell silent. Annie died in 1968, Jean two years later, and their collections were sold in several stages. What remains is the house. An icon classified as a historical monument, it is now owned by a private American collector, Robert Rubin. Open, or rather half-open, to professionals only, it proudly continues to inspire the architects of tomorrow.