On display at the Louis Vuitton Foundation in Paris this Fall, the Morozov collection is one of most remarkable, yet not the only one of its kind: the collection is in keeping with a long tradition of Russian art connoisseurs. 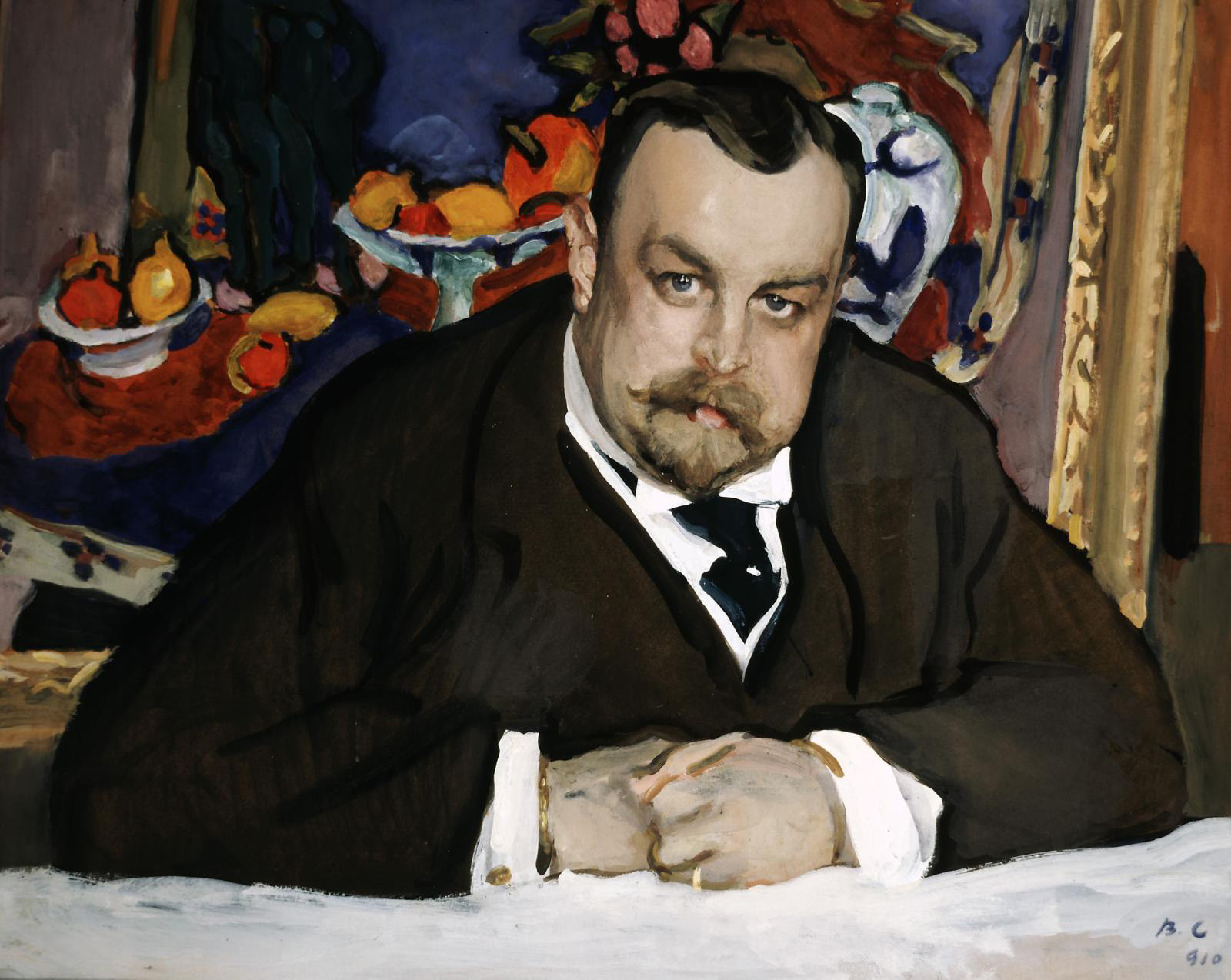 Russian collectors were an integral part of the late 18th and early 19th-century aristocratic and/or diplomatic elite. The following decades marked a major shift in this area, reflecting social and economic dynamics in the Russian Empire. Aristocrats like chancellor-prince Alexander Gorchakov continued to stand out, but diplomats and senior civil servants were also men of taste. They included General Nikolai Khitrovo (1771–1819), who amassed an important collection of engraved stones and ancient painted vases, and Dmitry Tatishchev (1767–1845), a diplomat who served in Naples, Madrid and Vienna. In 1804, Khitrovo gave Czar Alexander I (1801–1825) his cameos and intaglios to curry favor with him. Tatishchev died in Vienna nearly destitute and 30,000 rubles in debt. knowing that the czar would have his accounts settled, he bequeathed his 185 paintings to Nicholas I (1825–1855). The Dutch and Spanish works joined the Hermitage, which did not have any until then.

The imperial museum originally housed the Russian rulers’ private collections before becoming a showcase of national pride that aimed to compete with Europe’s greatest institutions, such as the Louvre and the Berlin Museum. That is precisely where one of its weaknesses lay. Since the reign of Catherine II (1762–1796), the collection had been enhanced as much by Old Masters as by recent works of art, but Alexander II, who came to the throne in 1855, focused primarily on antiquities. The emerging class of Moscow merchants and industrialists who grew wealthy as a result of Russia’s economic development and industrial revolution mainly filled in the gaps with contemporary art.

Promoting National Creation
Two trends marked the second half of the 19th century in Russia: the rise of intellectual, artistic and political nationalism, and the affirmation of Moscow as the Empire’s economic center. For the first time, Russian collectors were more interested in national than foreign art, convinced that it now had the same level of quality and should be exhibited on the same footing. That led Vasily Kokorev (1817–1869), who became rich from a wine patent and was nicknamed "our Monte Cristo" by some Russians, to build up a collection of mainly Russian works between 1840 and 1860 and to have a gallery built in Moscow to exhibit them.

The Saint Petersburg newspaper Bee of the North wrote about the opening on January 26, 1862: "The gallery is specially designed for Moscow, which until now has had nothing to support the public’s artistic education." The periodical praised the "morally productive endeavor," where lectures are held in a room shaped like an isba (a traditional Slavic log hut). Writer Piotr Boborykin added, “Mr. Kokorev wishes that in this Russian isba, a Russian comes to bring to the Russians the living and warm Russian word... God wants others to properly imitate his truly patriotic example." The experience was short-lived. In 1864, Kokorev had to close his gallery. He gradually auctioned off part of its contents and gave 166 of his works to the Crown. About a hundred of them are still in Saint Petersburg’s Russian Museum.

While Vassily Kokorev’s name has almost completely fallen into oblivion, the same cannot be said about his contemporary Pavel Tretyakov (1832–1898), who succeeded in turning his dream into a reality that still exists today. Born into a family of wealthy textile manufactures, at the age of 38 he wrote up a will stipulating: "I bequeath a capital of 150,000 rubles to establish an art museum or a public painting gallery in Moscow. For me, who passionately loves art, there can be no other desire than to set up a public place for the preservation of the fine arts, accessible to everyone, capable of being useful to many and a source of pleasure for all... a national gallery, i.e. comprised of paintings by Russian artists." His vision was clear. It was shared by many altruistic Russian collectors who wanted not only to educate people but also to materially support contemporary artists. "I spend money on paintings,” he wrote to his wife. “It is a serious aim […] Moreover, the money goes to hardworking painters, who have not been particularly fortunate in life." Tretyakov assiduously visited their studios, particularly those of the group known as the "Ambulants"—so-called because of their traveling exhibitions—created in 1870 when they split from the Saint Petersburg Imperial Academy of Fine Arts and its vision, which they deemed too conservative.

Tretyakov not only bought their works but also established a gallery of portraits he commissioned from them—a sort of Russian Pantheon. "The portraits there,” wrote Russian painter Ilya Repin (1844-1930), “depict men dear to the nation, its finest sons, who, by their selfless action, usefully contributed to the development of their homeland because they believed in a better future for it and fought for it to happen." In 1872–1874, Tretyakov had a gallery built to house his paintings, but the collection grew at such a pace that another had to be added in 1882, a third in 1885 and a fourth in 1892. Grand Duke Vladimir Alexandrovich, brother of Nicholas II (1894–1917) and president of the Academy of Fine Arts, who was then preparing to open the new Russian Museum the czar had wished to create in St. Petersburg, asked Tretyakov to sell his collection to the Crown. He boldly refused, preferring to bequeath it to the city of Moscow so that it would remain there permanently and become the capital’s most important national art gallery.

The 1,287 paintings include works by the leading Russian artists between the second half of the 18th century and the end of the 19thcentury: Vladimir Borovikovsky, Dmitry Levitsky, Orest Kiprensky, Karl Bryullov, Ivan Kramskoy, Ilya Repin, Vasily Perov and Vasily Vereshchagin. Visitors browsing the Tretyakov Gallery’s rooms today can see the extraordinary strides made during this period. Pavel Tretyakov was not the only collector in the family. His brother Sergei (1834–1892) also owned a very fine collection of paintings, but only European ones so as not to compete with him. His works by Jacques-Louis David, Delacroix, Corot, Millet, Daubigny and Bastien-Lepage—today in Moscow’s Pushkin Museum—attest to the sound judgment of 19th-century Russian collectors following in their forerunners’ footsteps the century before.

The fact that several collectors belonged to the same family is another characteristic of 19th-century Russia, especially in Moscow, where several dynasties stood out over one or more generations. For example, the Riabouchinskys, another family of wealthy textile manufacturers, had three brothers and a sister—Stepan (1874–1942), Nikolai (1877–1951), Mikhail (1880–1960) and Evfimia Riabouchinskaya-Nossova (1881–1960)—who collected contemporary Russian artworks (Serov, Vroubel, Somov, Golovin) as well as European paintings (Degas, Pissarro, Zuloaga, etc.). Pavel Kharitonenko (1852–1914) and his daughter, Elena Olive (1880–1948), also collected art.

The best-known family is certainly the Shchukins, whose four brothers distinguished themselves in various areas. The oldest, Pyotr (1853–1912), was mainly interested in Russian antiques (icons, objects, portraits, archives), which he displayed in a purpose-built museum on Malaya Grouzinskaya Street. He bequeathed thousands of pieces to the Moscow Historical Museum. The second, Dmitry (1855–1932), collected only 14th to 18th-century European art, especially Dutch paintings. Nationalized during the Bolshevik Revolution, for a while his 146 precious works comprised Russia’s first museum of early Western paintings before they joined the Pushkin Museum, of which he was the curator from 1924 until his death. The youngest son, Ivan (1869–1908), became an art critic in Paris but also collected works, including two paintings by El Greco (Museum of Fine Arts, Budapest and the Phillips Collection, Washington). But the most famous Shchukin brother was the third, Sergei (1854–1936), whose dazzling collection of avant-garde paintings was featured in a remarkable show at the Vuitton Foundation in 2016.

Maurice Denis, Cézanne, Bonnard…
The Louis Vuitton Foundation’s new exhibition focuses on Moscow’s Morozov dynasty, another family that had made a fortune in the textile industry in the early 19th century. while Mikhail Abramovich (1870–1903), who died prematurely at the age of 33, supported Russian artists such as Levitan, Nesterov, Vrubel and Serov, he was also the first Russian collector to appreciate Gauguin, Van Gogh and Bonnard, undoubtedly influencing his younger brother Ivan (1871–1921). While Ivan probably had an equally keen and prescient eye, he long remained in Sergei’s shadow. What surely set him apart was his passion for contemporary Russian artists such as Vrubel, Somov, Golovin, Levitan and Malyavin, and even the most modern ones, like Chagall, Mikhail Larionov and Natalia Goncharova. After benefiting from Korovin's drawing and painting lessons in his youth, he wanted to be a painter, and therefore perhaps had a keener eye for his contemporaries’ work than other collectors.

Ivan visited Paris for the first time in 1903, going to the Salon de la Société nationale des beaux-arts (Salon of the National Society of Fine Arts) with his brother Mikhail and beginning a long series of acquisitions, including Alfred Sisley’s La Gelée à Louveciennes (Frost at Louveciennes) at the Durand-Ruel Gallery. He returned to Paris at least twice a year, for the Salon des indépendants in April and the Salon d'Automne in October. He bought Renoir’s Portrait de Jeanne Samary in 1904 and four Monets the following year, again at Durand-Ruel’s, including Boulevard des Capucines, Paris and Waterloo Bridge, effet de brouillard (Waterloo Bridge, effect of fog). In addition to Durand-Ruel, Ivan forged close ties with Ambroise Vollard, buying Renoir’s La Grenouillère from him in 1908. In 1906, the year Sergei Diaghilev presented a show called "Two Centuries of Russian Painting and Sculpture" at the Salon d'Automne, which included some of Morozov’s paintings, the collector discovered Maurice Denis, whose works impassioned him. He saw some of them in Baron Denys Cochin’s hôtel particulier (urban mansion) and the following year commissioned Denis to decorate his music room in Moscow with the Story of Psyche (see photo), a set of 11 panels that are still quite surprising today because of its tone and classical style. The work is quite different from those of his contemporaries and, especially, from Morozov's other acquisitions at the same time: 11 paintings by Gauguin bought between 1907 and 1910 (including six in 1908), several by Van Gogh from Eugène Druet (including La Vigne Rouge (The Red Vine), La Ronde des prisonniers (The Prisoners' Round) and Paysage d'Auvers après la pluie (Auvers Landscape after the Rain)) and others by Cézanne, about whom he was passionate. He bought 20 of his works, 15 of them from Vollard and seven in 1909 alone.

Another artist who sparked Morozov’s enthusiasm was Pierre Bonnard, from whom he commissioned a triptych, La Méditerranée (the Mediterranean, see photo), for the staircase of his Moscow home. It was exhibited at the 1912 Salon d'Automne before being sent to Russia. Later it was joined by two other panels, Automne, la cueillette des fruits (Autumn, Fruit Picking) and Début de printemps (Early Spring). Valentin Serov’s very beautiful portrait of Morozov, which shows Matisse’s Fruits et Bronze (Fruit and Bronze, 1910) in the background, is like a proclamation in favor of the avant-garde from a collector who also acquired three masterpieces by Picasso: Arlequin et sa compagne (Harlequin and His Companion, 1901), the still classical Fillette à la boule (Girl with a Ball, 1905) and the cubist portrait of Vollard.

In spring 1920, French art critic Félix Fénéon interviewed Morozov even as the Bolsheviks were nationalizing his collection and after he had fled to Switzerland. The collector flattered himself by boasting that his intact collection of 240 French paintings made up the world’s "second-largest museum of Western art". He also took pride in presenting his nation’s art to his fellow countrymen, like the Russian collectors who desired this art to be discovered since the days when the Russian court spoke French.