While the Chirico exhibition was supposed to open on April 1 at the Orangerie, Paris under lockdown turned into a positive Chirico painting, to the delight of a few strollers and photographers. 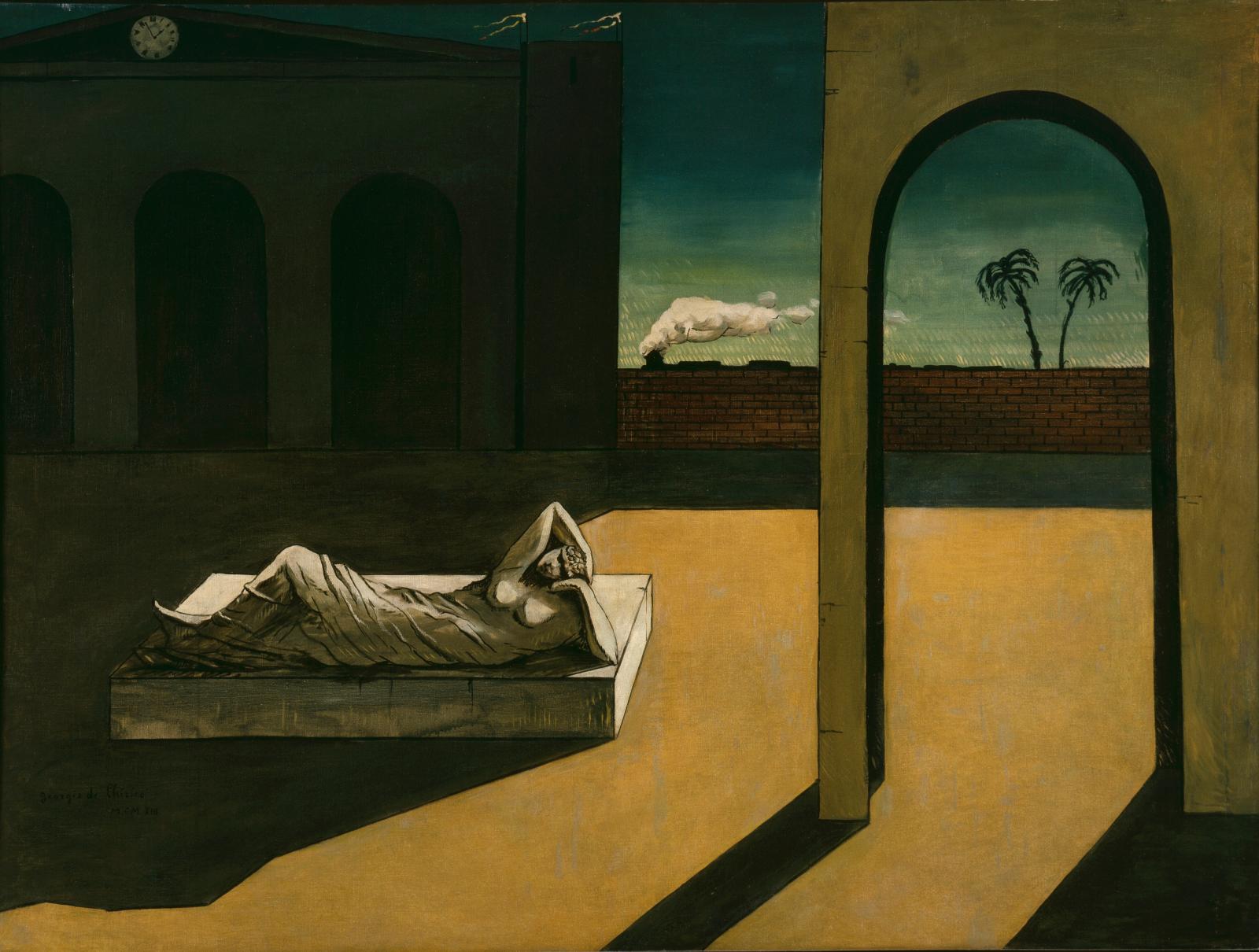 Chirico's deserted, petrified cities inevitably came to mind for those crisscrossing a Paris emptied of its inhabitants in mid-March. Free of strident traffic and swarms of pedestrians, the city appeared in a new, unreal light to the rare stray wanderers.

The Soul of Cities
Chirico had his first "revelation" in a city: in Florence, on the Piazza Santa Croce, a few metres from Dante's statue. "The autumnal sun, lukewarm and loveless, lit up the statue and the façade of the temple. I got the strange impression that I was seeing all these things for the first time. And the composition of a painting came to mind." This picture, Enigma of an Autumn Afternoon, was the first of a series in which the artist strove to capture the enigma of an image imbued with the metaphysical mystery of the "moment". From then on, his work constantly evoked cities with banal architecture, "unburdened of history", echoing that revelation.
Chirico's deserted cities make play with light and shadow. The inhabitants, rudimentary silhouettes in classical drapery, seem insignificant before the statues that reign over the city, like this sleeping Ariadne waiting in the labyrinth to be consoled by Dionysus after Theseus abandoned her. Beyond the surrounding wall, a mysterious tower with many-coloured banners, a factory chimney, the sails of a boat and a locomotive with puffs of steam provide a glimpse of endless spaces that only Ulysses or Jason would dare to face.

The Paris Revelation
After Munich and Turin, Chirico adopted Paris, a "city of undreamed dreams, built by demons with holy patience." French classical architecture exemplified the enigma for him. He had a fresh "revelation" at Versailles: "One sunny winter afternoon, I found myself in the courtyard of Chateau of Versailles. Everything was still and silent. Everything looked at me with a strange, quizzical eye. […] I gazed at the stone heroes around me, immobile beneath the clear sky. […]" And he noted, as a faithful reader of Zarathustra, evidence of the eternal return of things: "It seemed to me at that moment that I had already seen this chateau."
Chirico loved to wander around not only Rue de la Paix but also the obscure little streets "above Place Clichy", savouring the change of pace. He loved the surprises the city might offer him at the approach to a crossroads or the end of a vista. "A revelation can suddenly appear when we least expect it, and can be also be brought on by seeing something like a building, a street a garden, a public square."

Paris in Lockdown; Paris liberated
Paris under lockdown would have delighted him as it would have enchanted Louis Aragon's Paris Peasant. Freed, in Chirico's phrase, from "the continual, whirling orgasm of life," the city was revealed to itself. No longer mere decor, architecture was restored to its sovereign place. Occasional passers-by, astonished, discovered hitherto invisible details in familiar streets and squares. The ordinary rivalled the exceptional without let or hindrance. A now absolved ugliness joined in the dance; the tower of Montparnasse and the dreary 1970s blocks of Beaugrenelle and Jussieu took on the innocent look of building games. The Louvre and the Petit and Grand Palais came to life. On their pediments, in niches, sculptures began to speak, calling out to the rare onlookers and making play with their charms. Statues held sway on their pedestals.
While the boulevards with their wide pavements began to look like forests, more unobtrusive streets revealed their undulations and subtle rhythms. The main streets engulfed by luxury brands recovered the simplicity of yesteryear. Rue Saint-Honoré, its shops stifled in metal or chipboard, took on the look of a provincial "main street" while dummies decked in the latest fashion, forgotten in their display windows, seemed to come from a time long past. Empty of barges, tour boats and Batobuses, the Seine returned to a peaceful pre-Lutetian calm, reflecting foliage and façades in its tranquil surface. Chirico would have loved this Paris "unburdened of history" and references. He would have relished the most ordinary, commonplace details, alone capable in his view of making those "immense springs, true fountains of lyricism" gush forth. "Here things find their stage and scenery: transformed, made more mysterious and brilliant by the vast grey backdrop of the city setting them off, they appear in a new splendour." In his wake, a few strolling photographers have sought to capture these small trifles and great moments of a metaphysical Paris in all their sensuality.