The sieges of Constantinople in 1204 and 1453 spurred the growth of a thriving luxury glassware trade in Europe. The invention of cristallo—thin, translucent glass—made Venice famous. 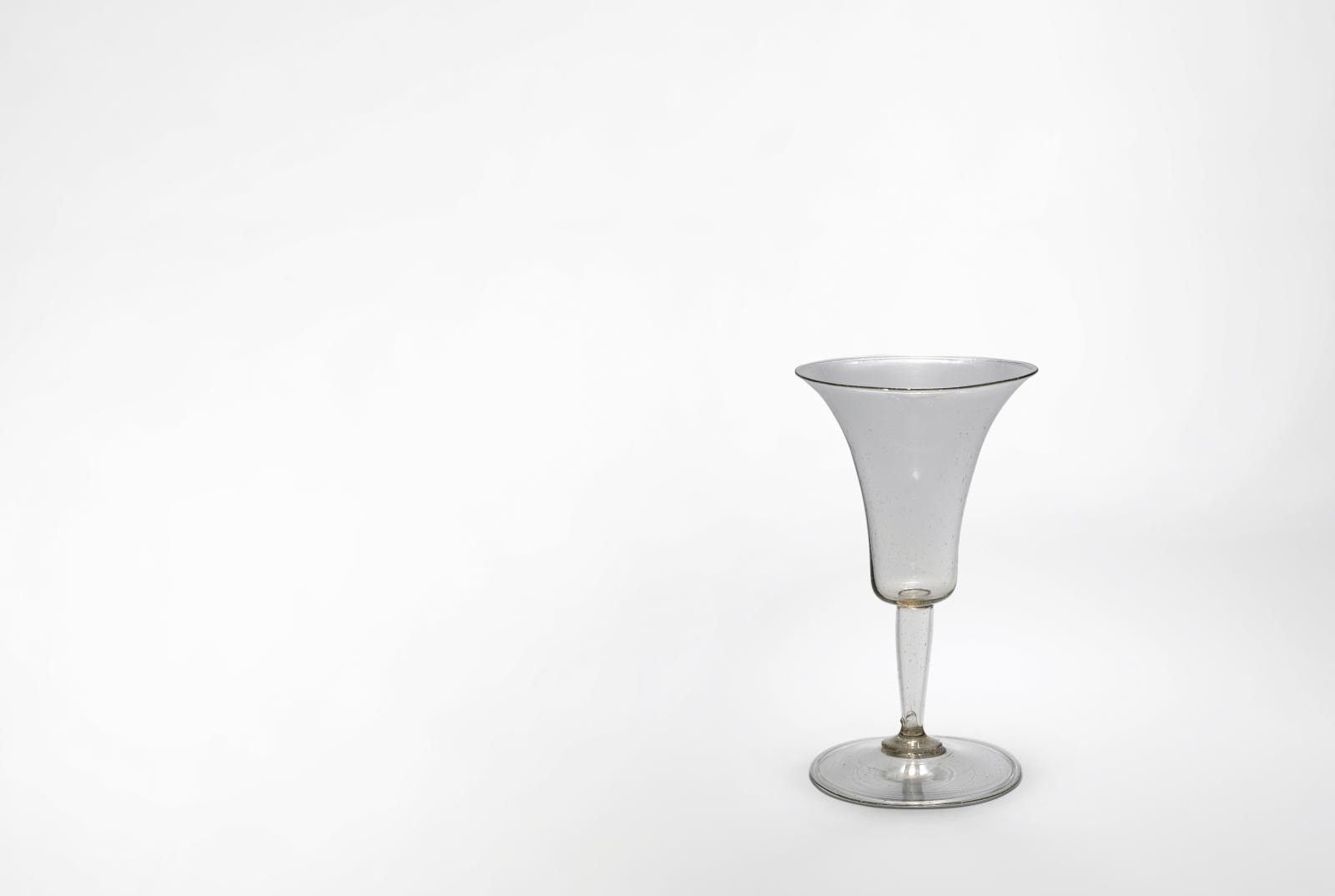 From the 13th century, princes who collected precious objects became unhappy with the unreliability of the supply of rock crystal in Europe. So they set their sights on their glassmakers, whose promising work seemed the only means to equal rock crystal’s clarity, strength and luxurious finish. Against all odds, glassmaking bloomed in Venice, the city least conducive to its development. The lagoon had plenty of sand, of course, but its high iron content gave the glass a greenish hue unsuitable for this ambitious undertaking. Consequently, in the 14th-century glassmakers starting importing, at great expense, quartz pebbles from Ticino, which were then ground into a fine powder rich in silica: an indispensable ingredient for making glass paste. The binder was made of plant ash imported from Syria and Egypt. There was just one problem: the kilns, which consumed huge amounts of energy. They had to be continuously stoked with fuel, but Venice and Murano were nearly treeless. The wood had to be shipped in by boat.

A bright, colorful palette
Glassmaking in Venice, then, had nothing going for it—except its port, the largest in Europe at the time. The city grew wealthy on trade in exotic goods and allowed many foreign craftsmen to settle there in return for their manufacturing secrets, as witness a remarkable early 14th-century colorless Aldrevandin beaker in the British Museum. It takes its name from its Latin inscription—"Magister Aldrevandin me feci(t)" (Master Aldervandin made it) —and attests to Venetian glassmakers’ pioneering know-how in approaching the clarity of rock crystal.
Around 1450, Angelo Barovier (?-1496) invented cristallo, an alkali-lime glass with unmatched transparency and purity achieved by mixing ground quartz pebbles and marine plant ash. But, pure as it was, this was not the crystal we know. Its lead-free chemical structure had neither the strength nor the particular ring of real crystal. But it was a major step forward that raised Venice to the rank of Europe’s luxury glassmaking capital, a status it aimed to keep by intimidating anyone who might divulge the secret of cristallo.
Venetian glassmakers defied the authorities’ threats of exile or sometimes even death, more out of necessity than rebelliousness. Knowledge circulated in the Middle Ages and the modern period, when traveling craftsmen adapted their recipes to the places in which they found themselves, creating glassware "in the Venetian style" that imitated the decoration more than the material. Within Venice itself, two very similar kinds of glass existed side by side, and it was not easy to tell the difference between them: cristallo and vitrum blanchum, a somewhat less refined colorless glass sometimes given away by a slightly grayish glint. The Louvre Museum’s Venetian glass collection has both kinds in a wide array of shapes and colors.

Boundless imagination
No trace of 15th-century glassware production remains, so its aesthetic development can only be traced in paintings. At first, technical advances were incompatible with decoration, which altered the purity so long sought. Thin beakers with simple gold rims or plain flat-sided flasks, based on those used by pilgrims, can be seen in paintings by the period’s great artists. The earliest surviving pieces date from the turn of the 16th century, when glassmakers started using a new tool called the soffietta to obtain the conical shapes emblematic of cristallo.
In the 16th century, glasses could feature the family crests of the aristocrats or ecclesiastics who had them made. From 1650, they were brimming with almost unlimited imaginativeness. Using pincers, glassmakers were able to pull and stretch the molten material into elaborate shapes and create handles. The glass gradually took on the colors of the shimmering Venetian palette: cobalt blue, emerald green and aqua, an elegant, diaphanous shade of green. The decoration was molded or hot-applied in the form of rods, often colored, that could be twisted, striated or intertwined. Even trickier techniques imitating hard stones achieved a rare beauty. Produced from the first quarter of the 16th century onward, cristallo làttimo rivaled Carrara marble, while cristallo calcedonio compared favorably with chalcedony, jasper and agate. Lastly, avventurina required so much skill and dexterity that making it was an adventure with an uncertain outcome, hence its name.

Acclaimed in the 19th century
In the 1600s, Venetian glass faced stiff competition from Bohemia. But in the 18th-century glassmaker Giuseppe Briani (1686-1772) found out the secret of its strength and breathed new life into Venetian glass. The result was the production of Rezzonico chandeliers and table centerpieces, which may have looked stunning but lacked the delicate clarity of Renaissance cristallo. Forgotten and supplanted by lead crystal for a time, vintage cristallo had so many passionate admirers in the 19th century that fakes and beautiful copies abounded. Today, the few surviving period pieces have lost none of their splendor and still cast a spell on collectors, just as they did during the Renaissance, with a clarity capable of gracefully imitating natural rock crystal.

WORTH KNOWING
The Venetian glass collections at the Louvre Museum and the National Renaissance Museum, Écouen

A Million-Plus Bid for a Limoges Enamel Plaque